Methylprednisolone Induce Terminal
Differentiation in the U-937 Human
Myelomonocytic Leukemia Cells
1Mersin University, Faculty of Science and Art, Department of Biology, Mersin2Hacettepe University, Faculty of Medicine, Department of Pediatrics, Ankara, Turkey ABSTRACT
Differentiation studies have shown that methylprednisolone have some roles onto the leukemia cell line such as HL-60 andK-562. Methylprednisolone (MP), a steroid compound, binds the nuclear glucocorticoid receptor and regulates the tran-scription. In this study, differentiation effect of methylprednisolone on human monocytic leukemia (U-937) cell line wasinvestigated for two types of cluster differentiation (CD11b, CD68) markers by using flow cytometry. It was observed thatthe significant terminal differentiation of U-937 cells occured after treatment with high dose (10-3 M) MP for 24 and 48 hrs.
Our data points out that MP is a differentiation inducing agent for myelomonocytic leukemic cells and could be potentialtreating compound in other type of leukemic cell differentiation.
Turk J Immunol, 2008; 13: 10-14
Key Word: Acute myelomonocytic leukemia, differentiation, cell culture, flow cytometry
Received: 03.05.2007
Revised: 06.11.2007
Accepted: 26.11. 2007
INTRODUCTION
has been demonstrated that other steroid compoundsuch as dexametasone and prednisone also induced differentiation on leukemic cells5-8.
M ethylprednisolone (MP), a member of the family
Myelomonocytic leukemia (MMoL) is a part of the of steroid hormones is known to play a critical acute myeloid leukemia characterised by the accumula- role in the cellular processes such as proliferation, tion of malignant myelomonocytic cells9. Experimental differentiation and apoptosis mechanisms by binding differentiation studies of myelomonocytic leukemia to members of the zinc-finger containing superfamily dates back to the 1974 when Sundström and Nilsson of nuclear hormone receptors1-2. When coupled with established the U-937 cell line from a diffuse histiocytic MP, these nuclear hormone receptors play a role as a lymphoma of a 37 year old male patient in Rudbeck transcription factor by binding directly to specific DNA Laboratory, Uppsala-Sweden10. In this study, the U937 recognition sequences in the promoter region of target cell line was chosen since it serves as an in-vitro model genes, resulting in the alteration of the for monocyte/macrophage differentiation.
transcription initiation of differentiation genes1-2. Hence, steroid compounds suggest that they might play a role myelomonocytic and in other types of leukemia cells of differentiation on leukemic cells since they have dates back to the late of 1970s and beginning of the been shown to induce the differentiation of 1980s. The cells which contain glucocorticoid granulocytic and monocytic stage of mouse blast receptors are related to response of steroid molecules cells3-6. Besides valuable data from Lotem’s group, it In addition, the increased effect of dexametha- purchased from Sigma Chemical Co. Fetal bovine sone was shown in RA (Retinoic Acide) induced differentiation of HL-60 cells to neutrophils12-13. In Streptomycin were purchased from Biochrome the end of 1990s, He and Jiang showed that anoth- (Berlin, Germany). Stock solutions of the methylprednisolone were prepared in ethanol and differentiation of HL-60 cells in a dose dependent diluted in fresh medium. PE-conjugated mouse manner14. Last decade it has been shown that many anti-human CD11b and FITC-conjugated mouse differentiation agents had been induced the differ- anti-human CD68 monoclonal antibodies were entiation of HL-60 cells. Recently, a study from purchased from Becton Dickonson (Mount View, Turkey demonstrated that different signal CA). The U937 cell line was kindly gifted from Dr. Hande Canpinar from Hacettepe University differentiation of HL-60 and K-562 cells by MP or Institute of Oncology, (Ankara, Turkey).
arsenic tri-oxide (As2O3) (15). Unlike As2O3, MP-induced granulocytic differentiation was related with Cell Culture
serine/threonine protein phosphatases type 2A subunit upregulation. In addition, the combination medium containing 15% heat inactivated fetal of As2O3 and MP has also a synergistic effect on bovine serum, 2 mM L-glutamine, 10.000 units of penicilin per ml, 10 mg/ml of streptomycin at 37oC and in 5% CO2. Cells in logaritmic growth phase methyleprednisolone (HDMP) (20-30 mg/kg/day) were used for the study. U-937 cells (1 x 106 treatment has been shown to induce in vivo cell/ml) were treated with 10-6 M and 10-3 M differentiation of myeloid leukemia cells to mature concentration of MP for 24 and 48 hours, in six well granulocytes and apoptosis of myeloid leukemic cells in children with different subtypes (AML-M1, Cytotoxicity Assay
-M2, -M3, -M4, M7) of AML16-19. Moreover HDMP In order to determine viability and toxicity of has been shown to effect the differentiation of pri- MP, the cells were seeded 1x106 cell/ml in 6 well plates. After adding high (10-3 M) and low (10-6 M) The objective of the present study was to evaluate dose of MP, U-937 cells were incubated under the the in-vitro differentiation effect of 6α-methylpredni- humidified atmosphere and 5% CO2 conditions at solone in U-937 (human myelomonocytic leukemia) desired periods of time. Cell viability was cells which is one of the rare cell lines displaying measured by either trypan blue dye exclusion many monocytic characteristics and has thus served assay and CBC. The concentration of drug which affected less than 50% of cell population were differentiation experiment. The U-937 cells are com- considered as non-toxic dose and used for the mitted to the macrophage branch of the myeloid lineage and can be induced by a variety of agents to mature from a promonocytic into a monocytic stage Determination of Differentiation
of development. In this study, cell surface expression of myelomonocytic and macrophage like determination of differentiated cells was assessed markers, CD11b and CD68 were analysed to by the measurement of cell surface antigens demonstrate the efffect of MP on the differentiation CD11b and CD68 by flow cytometry. For testing of U937 cells in to a further stage of development.
CD11b and CD68 cell surface antigens, the U-937cells were stained with PE-conjugated mouse MATERIALS AND METHODS
anti-human CD11b and with FITC-conjugatedmouse anti-human CD68 antibodies respectively.
Reagents
After incubation at +4oC in dark atmosphere for 30 minutes, the stained cells were diluted with 1 ml dimethylsulfoxide (DMSO), trypan blue, were 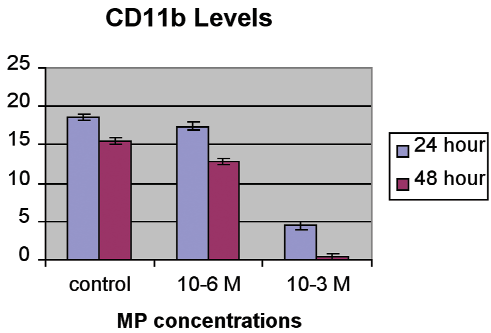 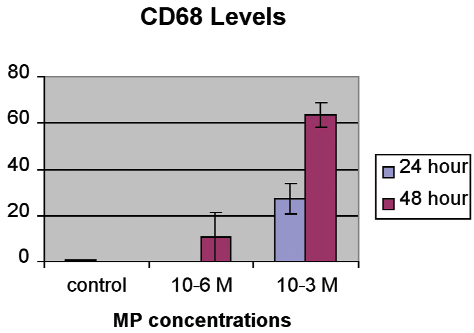