J. Phys. Chem. B 2002, 106, 1714-1721
Heterogeneous Inhibition of Homogeneous Reactions: Karstedt Catalyzed Hydrosilylation
Francesco Faglioni,† Mario Blanco, William A. Goddard, III,* and Dennis Saunders
Materials and Process Simulation Center, Beckman Institute (139-74), Caltech, Pasadena, California 91125,
and AVery Research Center, Pasadena, California 91107
ReceiVed: July 26, 2001; In Final Form: NoVember 26, 2001 The Karstedt-catalyzed hydrosilylation reaction used in curing of silicone release coatings was investigatedusing first-principle quantum mechanical techniques (density functional theory) as well as semiempiricalmethods to estimate solubility parameters. The results we obtain for the catalytic cycle indicate, in agreementwith experimental results, that hydrosilylation occurs easily at room temperature. The detailed mechanismwe suggest contains the key features of the models previously proposed in the literature by Lewis and Chalk-Harrod and adds quantitative estimates of reaction energies and barriers. On the basis of the energy profilefor the catalytic cycle in the presence of inhibitor molecules and on solubility parameters for the speciesinvolved in the reaction, we conclude that the role of the inhibitors we considered is to phase-separate thecatalyst from the substrate. The reaction is thus quenched by introducing a microscopic second phase thatinterferes with the homogeneous reaction.
1. Introduction
elementary steps commonly observed in organometallic chem-istry, such as oxidative addition and reductive elimination. A Hydrosilylation reactions (eq 1) are among the most important variation of the Chalk-Harrod mechanism was also proposed reactions in silicone and siloxane chemistry,1 and they are to explain the formation of vinylsilanes.2,7 This version assumes extensively used as a means to form Si-C bonds. One importantapplication of these reactions is to cross link hydrosiloxanes an olefin attack on the Pt-Si bond that has never been observed with vinyl terminated dimethylsiloxanes1 for the production of experimentally. Although both the original and the modified protective backing surfaces in pressure sensitive adhesive labels.
Chalk-Harrod mechanisms correctly describe the hydrosilyla- This often involves catalysis by late transition metals, most tion reaction, they fail to account for a number of phenomena observed mainly at the beginning (induction period) and theend (change in color) of the reaction.
To explain the induction period, color change, and several other effects, Lewis proposed in 19868,9 a radically different Typical catalysts used for the cross linking are low valent Pt mechanism. He suggested that the catalytic species are colloidal compounds. Of these, one of the best characterized is Karstedt’s platinum particles rather than organometallic complexes. He regarded the reaction as a surface, or edge, catalyzed hetero-geneous process. His original mechanism became known as theLewis mechanism. Later, he realized that although mostexperiments result in the formation of colloidal particles,hydrosilylation does not depend on their existence and mustthus be regarded as a homogeneous process.10 When the originalLewis mechanism is translated from the platinum surface to anorganometallic compound, it becomes similar to the older Chalk-Harrod mechanism, the main difference being the order in which different ligands are coordinated and activated.
dCH2)]3. Upon solvation, the bridging ligand is released, yielding the more active form Pt[(H2CdCH)(CH3)2SiOSi(CH3)2- The structure of several compounds resulting from the reaction of inhibitor molecules with catalyst 2 are known from The catalyzed hydrosilylation reaction is typically fast at EXAFS or NMR analysis.11 To date, however, no clear model ambient conditions and, in the case of cross linking polymer- has been formulated to rationalize the role of the inhibitors. In ization, results in solidification of the substrate. It is hence particular, the problem of why certain additives are better common practice to quench the reaction by adding inhibitors inhibitors than others has not been addressed in the literature.
to allow easy handling and storage of the bath as a liquid. Once In the next section, we report our computational results for the bath is applied to the backing surface support, it is cured each of the elementary steps involved in the Chalk-Harrod, by removing the inhibitor, which activates the cross linking Lewis, and a third, similar, mechanism. On the basis of these reaction. Typical curing conditions are 5-20 s at 100-150 °C.
results, we conclude that all three mechanisms represent minor In 1964, Chalk and Harrod5,6,7 proposed a mechanism for variations of the same catalytic cycle and that the activation platinum catalyzed hydrosilylation reactions based on simple energy is small. In the following section, we investigate possibleroles of the inhibitors and come to the conclusion that inhibitors * To whom correspondence should be addressed.
† cannot block the active site by binding to it. In the fourth section, Current address: Dip. di Chimica, Universita` di Modena, Via Campi we report the results from solubility simulations of the various 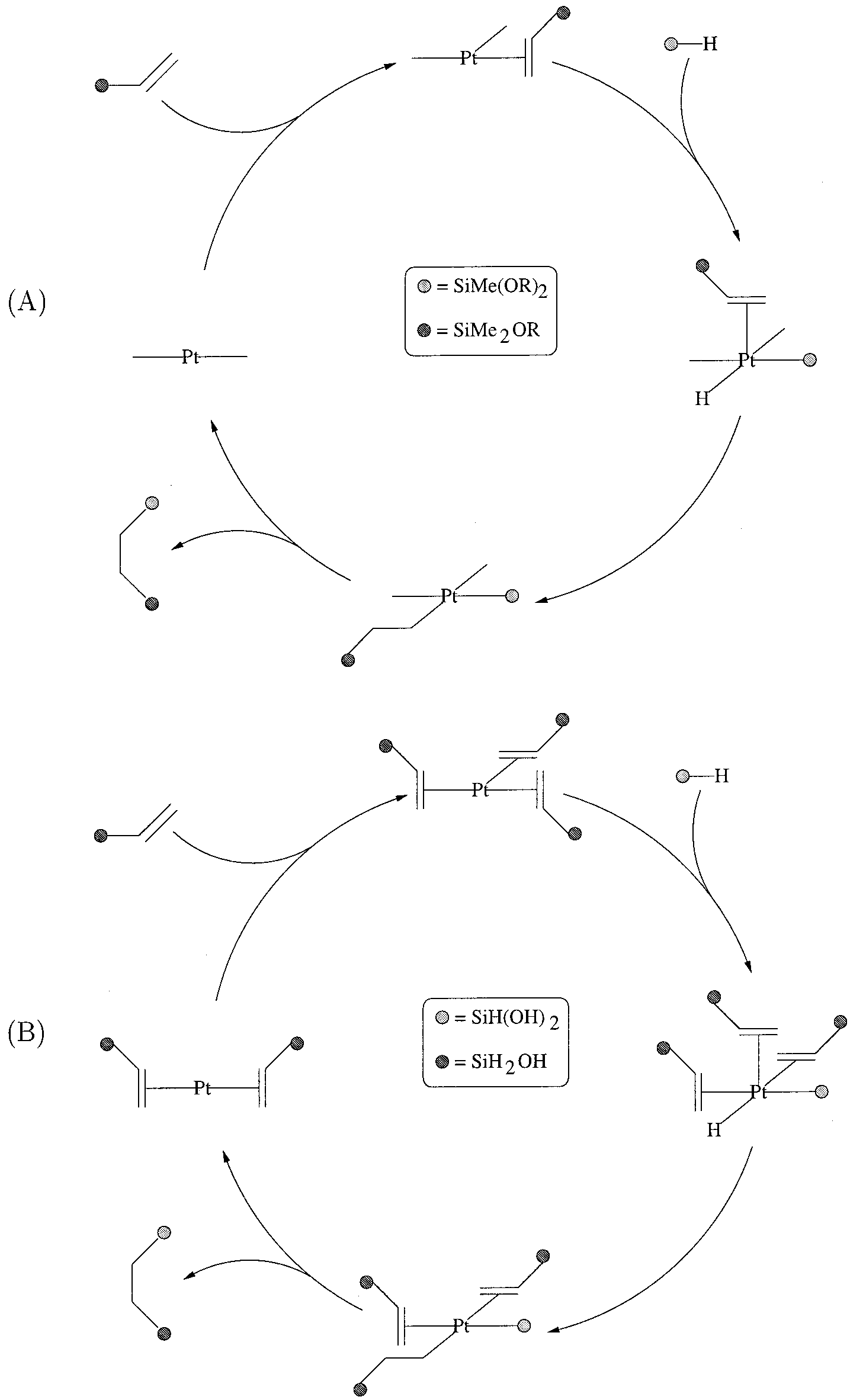 Heterogeneous Inhibition of Homegeneous Reactions J. Phys. Chem. B, Vol. 106, No. 7, 2002 1715
Figure 1. Chalk-Harrod mechanism as originally proposed (A) and our implementation to compute the reaction profile (B).
species involved in the reaction and conclude that inhibitors basis set on Pt and Si.16,17 Hay and Wadt’s effective core potentials (ECP) were used to replace the innerelectrons of Pt and Si.16,17 In the case of Pt, we used the small 2. Computational Model
core (core-valence) ECP, whereas for Si, we employed the largecore (valence-only) ECP.
2.1. Computational Model. All quantum computations were
obtained using the JAGUAR program suite.12 We performed To reduce the cost of the computations, especially of density functional theory computations using Becke’s hybrid geometry optimizations, we studied the effect of the catalyst three parameter functional for the exchange13 and Lee, Yang, only on monomers of silicon hydrides and siloxo vinyls. These and Parr functional14 for the correlation. We used a 6-31G** were further simplified by replacing all methyl groups with double- plus polarization basis set15 on all H, C, and O atoms hydrogens and all inactive O-SiR3 groups with hydroxides. The 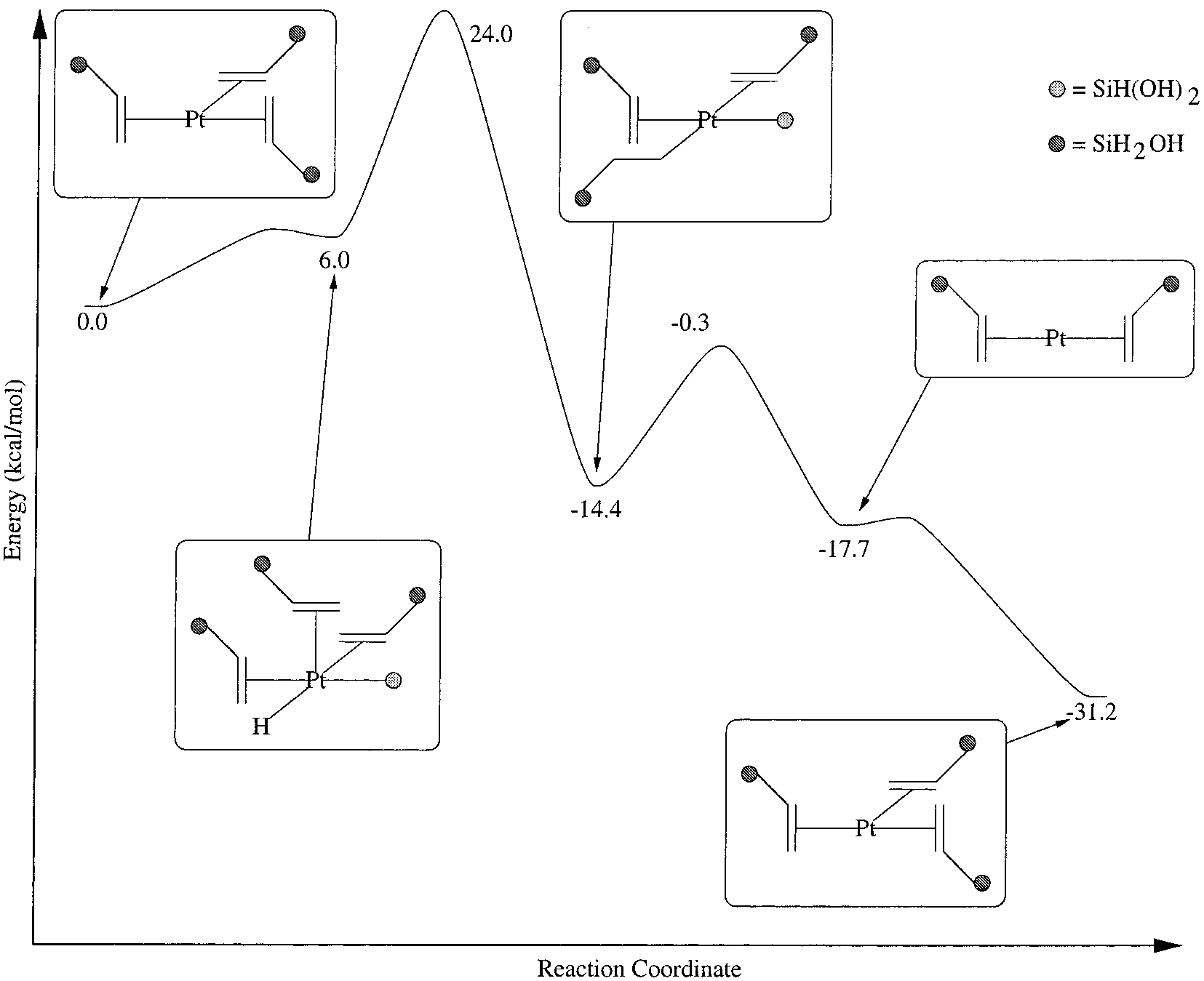 1716 J. Phys. Chem. B, Vol. 106, No. 7, 2002
Figure 2. Energy profile for the Chalk-Harrod mechanism.
molecules used are H2Si(OH)2 and CH2CHSiH2OH. Being The energetics for the modified Chalk-Harrod mechanism aware of the approximations made, we consistently verified that are found to be less favorable than those for the original. We the artificial hydrogens and hydroxides so introduced would not could not find a stable structure for the intermediate which move to sterically hindered regions or participate in hydrogen follows insertion in the Pt-Si bond. All calculational attempts at such an intermediate resulted in compounds where one olefin 2.2. Chalk-Harrod Mechanism. The original Chalk-
inserts in the Pt-Si bond and a second olefin inserts in the Pt-H Harrod mechanism5-7 is reported schematically in Figure 1A.
bond, i.e., olefin insertion in the Pt-Si bond activates the Pt-H Starting from a Pt(0) species, it involves oxidative addition of bond. The barrier for this process was found to be 31.4 kcal/ Si-H, olefin insertion in the Pt-H bond, reductive elimination mol, which is higher than the 24.0 kcal/mol obtained for of the product, and regeneration of the catalyst. Each one of these steps has been observed in similar compounds and is According to our profile, the oxidative addition and the generally regarded as plausible in the organometallic com- catalyst regeneration (olefin coordination) steps are either munity. A modified version of the Chalk-Harrod mechanism completely or practically barrierless. Possible rate-determining has been proposed to account for the formation of vinyl-silane, steps are the olefin insertion and reductive elimination. On the which may be found in the products depending on catalyst and basis of this model, we thus expect most of the catalyst in reactive conditions.7 The modified version is similar to the solution to be found in one of the intermediates preceding these original, except that the olefin inserts into the Pt-Si bond and steps, i.e., with oxidation state II.
the C-H bond is formed during the reductive elimination step.
2.3. Lewis Mechanism. The original Lewis mechanism is
To estimate the energy profile associated with the catalytic reported in Figure 3A. Our implementation is reported in Figure cycle, it is necessary to add explicit ligands. We thus performed 3B. It is apparent that in our implementation the Lewis computations on cycle 1B. The corresponding energy profile is mechanism differs from the Chalk-Harrod mechanism only in reported in Figure 2. It must be noted that the pentacoordinated the order of addition of the olefin and the hydride. Since these Pt moiety is unstable and the olefin in the axial position two steps are not rate-determining, the two mechanisms are effectively comes off the complex. This is due to the fact that essentially the same. The energy profile, reported in Figure 4, we are performing computations for gas-phase molecules differs from the one for Chalk-Harrod (Figure 2) only for the whereas the real system is solvated by olefins or siloxanes. To circumvent this problem, one should modify the catalytic cycle 2.4. “Practical” Mechanism. To avoid pentacoordinated
to maintain fewer ligands around the central platinum atom.
species, we modified the Chalk-Harrod and Lewis mechanisms We take this approach later in this document. The energy barrier by performing the insertion step before adding the fifth (olefin) reported in Figure 2 refers to the insertion of the equatorial ligand. This yields the catalytic cycle reported in Figure 5. We olefin, the insertion of the loosely bound axial olefin being emphasize the fact that, although it is more practical to perform gas-phase computations on this cycle, once the catalyst is 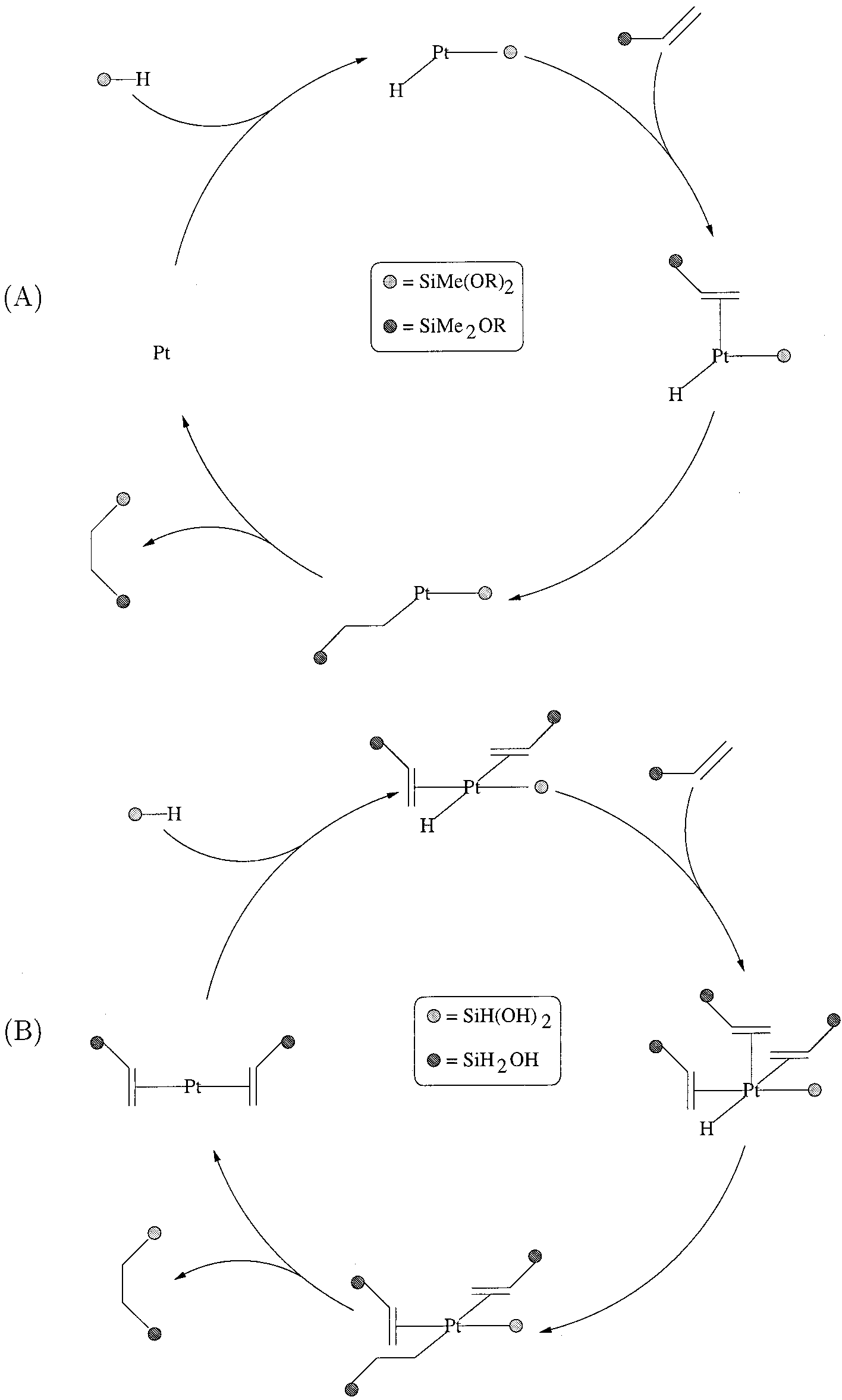