Three Good Things
Happiness Interventions That Work: The First Results
by Martin E. P. Seligman, Ph.D.
4th May 2004
We now have evidence to suggest that counting your blessings, using your strengths regularly, and expressing gratitude can increase happiness and reduce depression. The Mission and the Method
The mission of Positive Psychology, put simply, is to increase the total tonnage of happiness in the world. Our first step in this process was the compilation of interventions—more than a hundred, from the Buddha to Tony Robbins—that allegedly do so. The second step is to discover which of these proposed interventions actually work. There is a royal road to answering this question and it comes from the science of mental illness: the random assignment placebo controlled test (RCT). In RCTs the intervention is boiled down to simple, replicable ingredients (“manualized”) and volunteers are randomly assigned to either the test intervention or a control (inert) intervention. Researchers document the benefits of an intervention by measuring participants on relevant domains immediately before they receive the intervention, immediately after they complete the intervention, and then at designated follow-ups weeks, months, or years later. This is exactly how science validated drugs like Valium and Prozac and psychotherapies like cognitive therapy for depression and systematic desensitization for phobias. The very same logic holds for happiness, and this is what Tracy Steen, Ph.D., and I have been doing for the last year. Hundreds of new people register aevery day, and some interested individuals follow a link on this site to our research website. Individuals who choose to
help us test our interventions first take a battery of happiness and depression surveys. Next, they
are randomly assigned to either a placebo exercise or one of the interventions we are testing. All
interventions require two to three hours over the course of one week. In the next section I will
briefly describe the first six interventions we tested.
Intervention 1: The Gratitude Visit
This intervention required volunteers to write and present a letter of gratitude to someone they have never properly thanked. Volunteers received guidance about how to express their gratitude in writing and in person. Intervention 2: Three Good Things
Those who received this exercise were asked to write down three good things (big or small) that happened during the day every night for one week. Next to each good thing listed, individuals addressed the question, “Why did this good thing happen?” Intervention 3: You at Your Best
Volunteers assigned to this intervention were asked to write about a time when they were at their best. During the week, volunteers reflected on their story and considered the following questions: 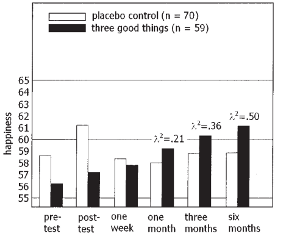 1) What personal strengths did I display when I was at my best? 2) In what other areas of my life might I use these strengths to my advantage? Intervention 4: Top Strengths
The instructions for this intervention were simple. Individuals were asked to take the Values in Action Signature Strengths Survey, write down their top five strengths, and then “use these strengths more often and in new ways” during the week. Intervention 5: Using Your Top Strengths
This was an expanded version of Exercise 4 (above). In addition to learning their top five strengths, volunteers received detailed instruction about how to use these strengths in new ways. Furthermore, they were asked to use their strengths in new ways every day for one week. Intervention 6: Placebo
Volunteers who received the placebo intervention were asked to write down an early memory every night before bed for one week. The Results Are In!
We followed 576 volunteers for three months after they received one of the six interventions described above, and here is what we found: Volunteers who received the placebo exercise (early memories) were happier and less depressed immediately after completing the one-week intervention, but they quickly reverted back to their usual emotional states. A similar picture emerged for those who completed the strengths survey but did not receive detailed instruction about how to use those strengths. Writing the story of you at your best had only slightly longer benefits: people were happier and less depressed for two weeks before they reverted to their usual emotional state. In contrast, the Gratitude Visit, Three Good Things, and Using Your Top Strengths produced substantial and lasting benefits. One month (for all) and three months later (for Three Good Things and Using Your Top Strengths), people were significantly happier and less depressed. This is a first. We now have good scientific evidence that three Positive Interventions can make people lastingly happier and can lastingly reduce depressive symptoms. So it is with
increasing confidence that we continue to generate, test, and disseminate happiness interventions
that work.
Postscript: The above report
was written by Seligman after 3
months. The research project
continued and they found that
the positive effects of Three
Good Things continued and
these people were still
significantly happier six months
later!