J. Agric. Food Chem. 2003, 51, 7617−7623
Effects of Garlic Powders with Varying Alliin Contents on
Hepatic Drug Metabolizing Enzymes in Rats
ANNE-MARIE LE BON,*,† MARIE-FRANCE VERNEVAUT,† LUCIEN GUENOT,† REMI KAHANE,‡ JACQUES AUGER,§ INGRID ARNAULT,§ THOMAS HAFFNER,| AND Unite´ Mixte de Recherche de Toxicologie Alimentaire, Institut National de la Recherche Agronomique, 17 rue Sully, 21065 Dijon Cedex, France, Coop d’Or R&D, INRA, Laboratoire de Physiologie et de Culture In vitro, 21100 Bretenie`res, France, Universite´ Franc¸ois Rabelais, IRBI, CNRS UMR 6035, Parc Grandmont, 37200 Tours, France, and Lichtwer Pharma AG, Wallenroder Strasse 8-10, D-13435 Berlin, Germany The anticarcinogenic effect of garlic has been demonstrated in both epidemiologic and experimentalstudies. In this study, possible mechanisms involved in the anticarcinogenic effect of garlic consumptionwere assessed by determining its capacity to alter drug metabolizing enzymes, in relation with itsalliin content. Rats were fed a diet for 2 weeks containing 5% garlic powders produced from bulbsgrown on soils with different levels of sulfate fertilization and therefore containing differing amountsof alliin. Activities of several hepatic enzymes, which are important in carcinogen metabolism suchcytochromes P450 (CYP) and phase II enzymes, were determined. Garlic consumption slightlyincreased ethoxyresorufin O-deethylase and CYP 1A2 levels. In contrast, garlic consumptiondecreased CYP 2E1 activity and the level of the corresponding isoform. UDP glucuronosyl transferaseand glutathion S-transferase activities were increased by garlic powders. The alliin content of thegarlic powders was positively correlated with UGT activity although not with other activities. Effectsproduced by garlic consumption were qualitatively similar to that of diallyl disulfide, a sulfur compoundthat has been extensively studied. These data could partially explain the chemoprotective effect ofgarlic.
KEYWORDS: Garlic; alliin; diallyl disulfide; liver; drug-metabolizing enzymes; rat
INTRODUCTION
carcinogens and thereby may influence the carcinogenicity ofchemicals (5). Several crude extracts of fruits, vegetables, and Fruit and vegetables, or their constituents, are considered good spices also have the ability to inhibit chemically induced candidates in the prevention of carcinogenesis (1, 2). Most carcinogenesis by modifying carcinogen metabolizing enzymes carcinogens are not reactive in themselves but require bio- activation to form ultimate metabolites that bind covalently to Garlic has long been considered a healthy food. More DNA and cause an alteration of the genome, which can further recently, the anticarcinogenic effects of garlic have been lead to mutagenesis and carcinogenesis. The toxicity of a demonstrated in both epidemiologic and experimental studies chemical carcinogen depends on the balance between detoxi- (6, 7). Among the possible mechanisms involved in the cation and metabolic activation. Compounds that are able to anticarcinogenic effects of garlic, its capacity to decrease modulate the activities of enzymes responsible for the metabo- activation and increase detoxication of carcinogens appears to lism of carcinogens are of interest when they reduce the level be of prime importance. Indeed, several organosulfur compounds of activation enzymes and enhance the activities of detoxication or garlic preparations such as garlic oil have been shown to be (3, 4). Many phytochemicals present in fruits and vegetables efficient inhibitors of CYP 2E1 and can therefore block the such as polyphenols, indoles, isothiocyanates, and organosulfur activation of nitrosamines and other compounds activated by compounds are known to affect the biotransformation of this CYP (8, 9). Induction of CYP 1A, 2B, and 3A has alsobeen observed with sulfides and polysulfides (10-12). The * To whom correspondence should be addressed. E-mail: [email protected] induction of phase II enzymes such as GST, QR, and UGT has † Institut National de la Recherche Agronomique.
also been demonstrated (13-17). These increased activities ‡ Present address: CIRAD-FLHOR, bd de la Lironde, 34398 Montpellier partially account for the protection provided by garlic sulfur compounds against mutagenesis and chemical carcinogenesis 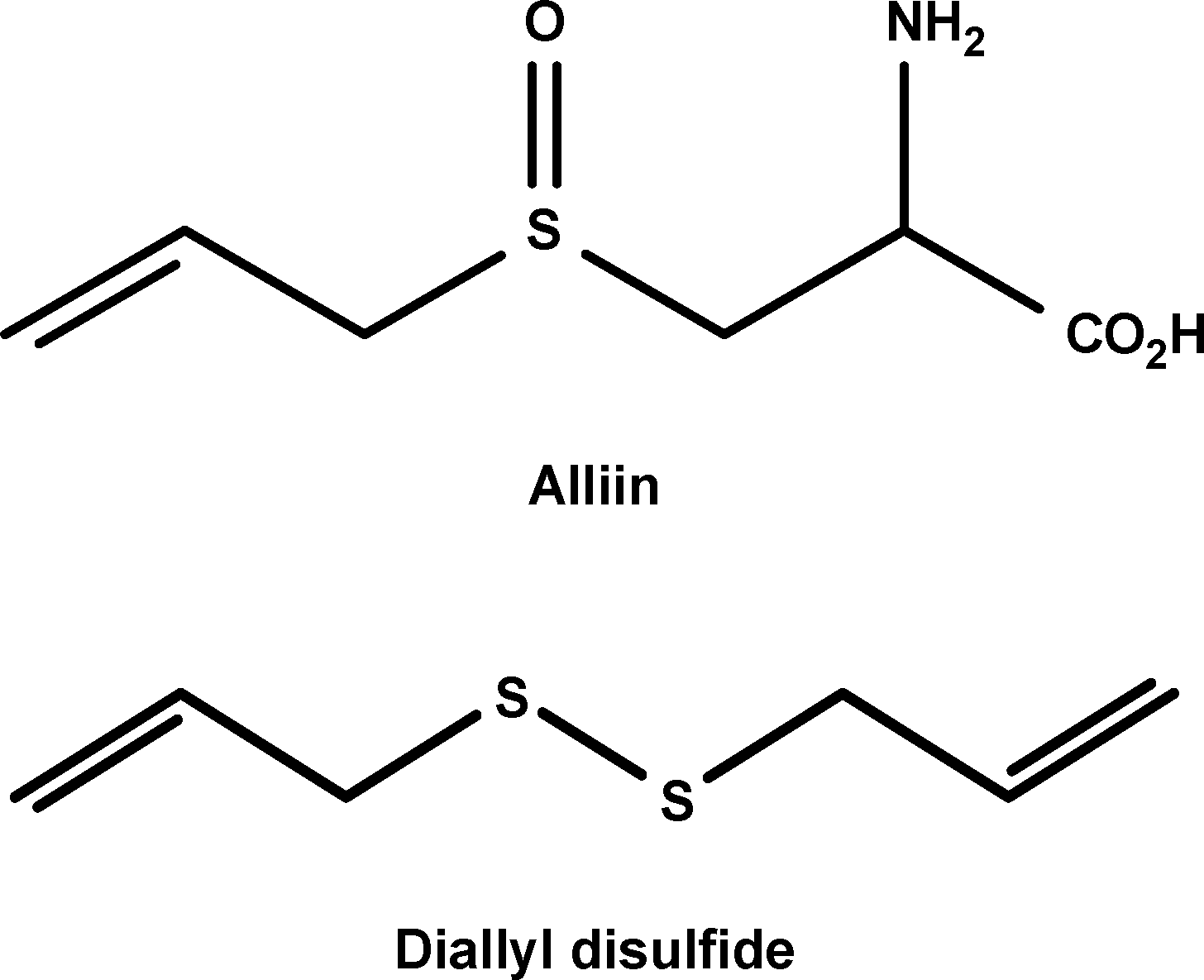 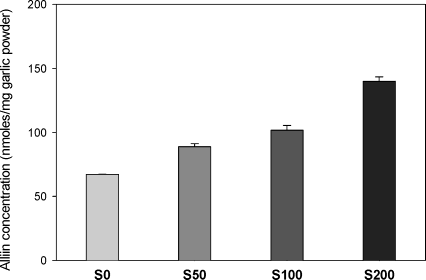 Garlic and Hepatic Drug Metabolizing Enzymes in Rat J. Agric. Food Chem., Vol. 51, No. 26, 2003 containing 0.05% DADS (3.4 mmol/kg diet). DADS was first dissolvedin corn oil and then mixed with the rest of the diet. Food intake wasrecorded daily, and rats were weighed twice a week during the 2 weekfeeding period. At the end of this period, rats were killed after 16 h offasting.
Preparation of Microsomal and Cytosolic Fractions. The animals
were killed, and the livers were immediately removed. Microsomesand cytosols were prepared by differential centrifugation and stored insmall aliquots at -80 °C (25). The protein levels of the microsomaland the cytosolic fractions were measured by the method of Bradford(26) adapted for the use of a Cobas Fara II centrifugal analyzer (RocheInstruments), using serum albumin as a standard.
Enzyme Assays. Total microsomal CYP content was quantified
Figure 2. HPLC profile of garlic powder. Key: 1, alliin; 2, γ-glutamyl-S-
according to Omura et al. (27). Determination of EROD and PROD allyl-L-cysteine; 3, γ-glutamyl-S-(trans-1-propenyl)-L-cysteine; and 4, activities was adapted from the method of Burke et al. (28). Reactions were carried out in a fluorimeter at 37 °C using a Cobas Fara IIcentrifugal analyzer (Roche Instruments, Switzerland). The concentra-tions of substrates ethoxyresorufin and pentoxyresorufin were 5 and10 µM, respectively.
The assay for PNPH activity was determined by HPLC (29). The concentration of the substrate p-nitrophenol was 0.1 mM, and themicrosomal protein was 0.5 mg/mL. The reaction product, p-nitrocat-echol, was monitored at 340 nm.
NO activity was determined by HPLC (30). The concentration of the substrate nifedipine was 0.2 mM, and the microsomal protein was1 mg/mL. UV detection of the product dihydronifedipine was performedat 254 nm.
Total GST activity was measured with 1-chloro-2,4-dinitrobenzene as the substrate (31). The reaction mixture contained 1 mM GSH and1 mM substrate. The formation of the conjugate was continuouslymonitored at 340 nm.
Figure 3. Alliin concentration of four garlic powders (S0, S50, S100, and
UGT activity was determined with 0.15 mM p-nitrophenol as a S200) grown with different levels of sulfate fertilization. Garlic powders substrate and with 3 mM UDP glucuronic acid (32). Microsomes were were produced from bulbs grown in a field. Sulfur fertilization was provided activated with Triton X-100, so that the ratio of Triton to protein by four levels of CaSO4 (0, 50, 100, and 200 kg/ha). Values are means concentration was 0.2. The measurement of GST and UGT activities was adapted for the use of a Cobas Fara II centrifugal analyzer.
Immunoblot Analyses. Immunoblot procedures were performed as
Table 2. Effects of Garlic Powders (S0, S50, S100, and S200) and
previously described (25). For the detection of CYP 1A1, CYP 1A2, DADS on Body Weights, Liver Weights, and Relative Liver Weights of CYP 2B1, CYP 2E1, and CYP 3A2, hepatic microsomes from rats treated, respectively, with methylcholanthrene, phenobarbital, pyrazole,and dexamethasone were used as positive controls. Quantification of individual bands was done by comparing blot density between treated and control rats using an image analyzer (Bioscan Optimetric, Edmonds, Statistical Analyses. Enzymatic activity data were treated by analysis
of variance followed by a Dunnett’s test to assess the difference between treatments and control. The level of significance was P e 0.05. Results of enzyme activities were correlated with the alliin content of the powder using linear regression analysis. The statistical significance wasanalyzed using the parametric test of Pearson. Correlations were a Values are means ± SEM (n ) 6). b Significantly different from control mean considered to be statistically significant when P was e0.05. Calculations were made with StatBoxPro v5. (Grimmer-soft, Paris, France).
significant (Table 2). The liver weights were also reduced by
treatment with garlic powders although the differences were not Sulfur Analysis of Garlic Powders. The following com-
significant. In contrast, DADS treatment significantly increased pounds were identified in the garlic powders: alliin, γ-glutamyl- S-allyl-L-cysteine, γ-glutamyl-S-(trans-1-propenyl)-L-cysteine, Enzyme Activities. Rats fed with the garlic powders and
and γ-glutamyl-phenylalanine (Figure 2). Alliin, a precursor
DADS had a lower content of hepatic CYP content (76-83% of biologically active compounds of garlic, was quantified in of the control) (Figure 4). PNPH activity was also decreased
the garlic powder (Figure 3). A strong relationship was found
by 50-60% in rats consuming diets containing garlic powders between the level of sulfate fertilization and the alliin content or DADS. EROD activity was increased by 30-40% by garlic of the garlic powders (correlation coefficient ) 0.998).
powders S50, S100, and S200. The increase was greater with Food Consumption, Body Weights, and Liver Weights.
DADS (76% of control). No significant variation of PROD and The presence of garlic powders or DADS in the diet modified NO activities was observed (Figure 4).
the food intake of the rats for few days. The growth of the treated UGT activity was significantly increased in the groups S100 rats declined during the first days due to lower food consumption and S200 and in the DADS group (50-100% of control value) and then recovered. At the end of the feeding period, weights (Figure 5). GST activity was slightly increased by all of the
of the rats fed with garlic powders or DADS were lower than treatments, although the increase was only significant for the those of the control group, although these differences were not S200 group and the DADS group. QR activity was increased 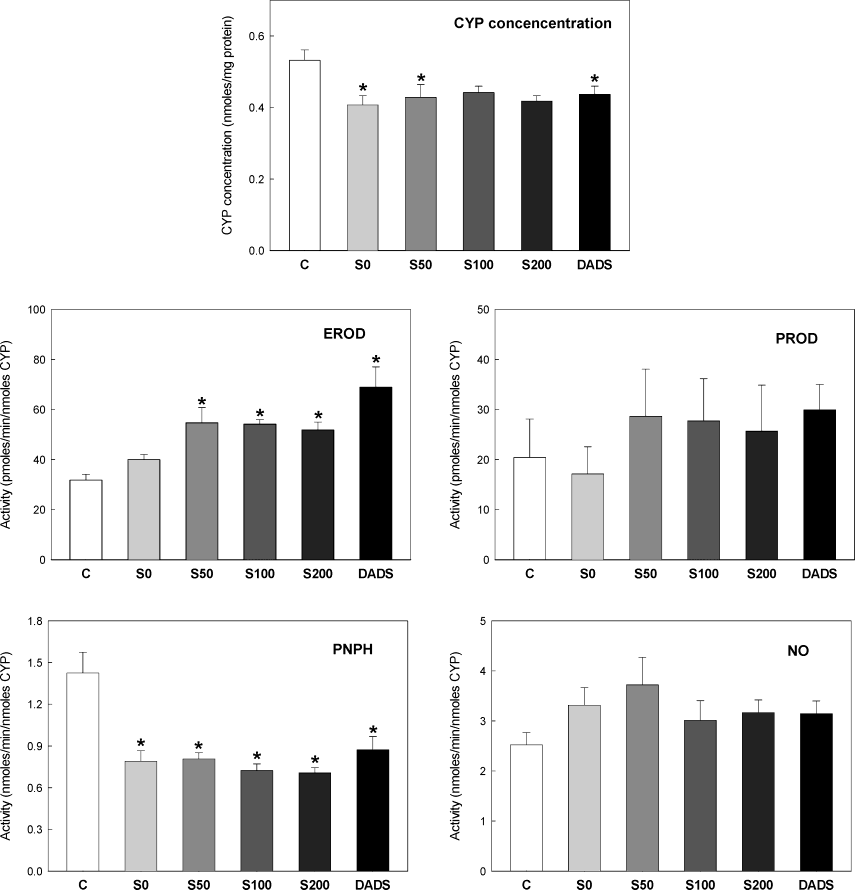 J. Agric. Food Chem., Vol. 51, No. 26, 2003 Figure 4. Effects of garlic powders (S0, S50, S100, and S200) and DADS on hepatic CYP-dependent activities. Results are presented as means ± SEM
(n ) 6). Values with an asterisk differ significantly from the control value C (Dunnett’s test P e 0.05).
by 25-47% by rats consuming garlic powders, although these was observed in the S100 and S200 groups. CYP 1A1 was not differences were not significant. The QR activity was signifi- cantly doubled by rats consuming DADS.
GST levels of different classes R, µ, and π were also analyzed Correlation Between the Alliin Content of Garlic Powders
by immunodetection (Table 5). GST A1/A2 was increased by
and Their Effects on Enzyme Activities. As the garlic powders
35-50% in S0 and S50 groups and was doubled in the DADS contain different amounts of alliin, we assessed the relationship group. GST A5 was not detected in the groups treated with garlic between the alliin content of garlic and its efficiency as powders but was visible in the DADS group. GST M1 was not modulators of enzyme activities. The correlation coefficients modified by any treatment whereas GST M2 was increased by between the alliin content of the garlic powder and its efficiency S50, S100, S200, and DADS groups. GST P was detected only on enzyme activities are presented in the Table 3. Among all
of the enzyme activities, only UGT activity was linearly relatedto the alliin content of garlic, showing statistical significance.
DISCUSSION
Immunoblot Analyses. Immunoblot analyses were carried
out to ascertain whether the observed increased or decreased In this study, we have demonstrated that feeding rats with CYP activities were accompanied by elevation or repression of diets supplemented with garlic powders for 2 weeks modulates specific CYP isoenzymes. Table 4 shows that levels of CYP
drug metabolizing enzymes. The response elicited by garlic 1A2 apoprotein were increased by 40-100% by the garlic consumption was qualitatively similar to that produced by powders and by DADS, while CYP E1 levels were decreased DADS fed alone. The alliin content of the powder was positively by the same treatments. The level of CYP 2B1 isoform was correlated with the increase of UGT activity although not with increased by 57% only in the DADS group. In the other groups, the other drug metabolizing enzyme activities.
there was no elevation of this isoform. In the same manner, Feeding rats with garlic for 2 weeks increased some enzyme there was no elevation of CYP 3A2 although a slight decrease activities depending on the particular form of CYP. Garlic

INFORMATION FOR PATIENTS AND CARERS ask your doctor, nurse or pharmacist. Telephone 020 8768 4500 Fax 020 8659 8680Caritas House, Tregony Road, Orpington BR6 9XASt Christopher’s Hospice is registered charity 210667Harris HospisCare is registered charity 1003903Most medicines have more than one effect on Haloperidol and levomepromazine to Dexamethasone tablets the body and for