2004 Poultry Science Association, Inc.
Fungal Transformation of
an Antimicrobial Fluoroquinolone
Drug During Growth on Poultry
Litter Materials
A. J. Williams,* I. A. Parshikov,† J. D. Moody,* T. M. Heinze,*
and J. B. Sutherland*,1
*National Center for Toxicological Research, U. S. FDA, Jefferson, Arkansas 72079; and †Department of Medicinal Chemistry, University of Mississippi, Primary Audience: Researchers, Veterinarians, Public Health Officials
The ability of a nonpathogenic fungus, Pestalotiopsis guepini, to metabolize fluoroquinolone
antimicrobial agents during growth on poultry litter materials was investigated. Sterilized rice
hulls, ground corncobs, and pine shavings in glass jars covered with foil were moistened with
sterile water and inoculated with P. guepini. The litter materials then were dosed with norfloxacin
and incubated for 20 d. In rice-hull cultures, P. guepini produced 4 metabolites: 7-amino-1-ethyl-
6-fluoro-4-oxo-1,4-dihydroquinolone-3-carboxylic acid, N-formylnorfloxacin, N-acetylnorfloxacin,
and desethylene-N-acetylnorfloxacin. In corncob cultures, the fungus produced N-formylnorfloxacin
and N-acetylnorfloxacin. In pine-shavings cultures, there was little growth of the fungus and no
metabolism of norfloxacin. The results suggest that fungi that grow on poultry litter may degrade
residues of antimicrobial drugs.
Key words: fluoroquinolone, norfloxacin, poultry litter
2004 J. Appl. Poult. Res. 13:235–240
DESCRIPTION OF PROBLEM
that environment or are degraded by microor-ganisms that grow in the litter.
The use of antimicrobial agents in the poul- Norfloxacin, a fluoroquinolone antimicro- try industry to treat infections and promote bial agent, is used clinically for the treatment growth has frequently been associated with in- of urinary tract infections, bacterial enteritis,and eye infections [6, 7, 8]. The same drug is creases in bacterial resistance to clinically im- also used in poultry production in some coun- portant drugs [1, 2, 3, 4]. For instance, when tries for chronic respiratory diseases caused by fluoroquinolones are used, they may select for Mycoplasma synoviae and Escherichia coli [9, fluoroquinolone-resistant bacteria that can be 10, 11], although it is not registered for this found in poultry litter [5]. It is not known, however, whether all of the antimicrobial drugs Poultry litter contains many bacteria, some that reach poultry litter persist indefinitely in of which may be resistant to multiple antibiot- 1 To whom correspondence should be addressed: [email protected]
ics [5, 12, 13]. Although Enterococcus spp., Salmonella enterica, and other pathogenic bac- equipped with an HP 1090L/M liquid chroma- teria are sometimes found [13, 14, 15], they tograph. A 2.0 × 250 mm Prodigy column was usually are minor components of the total poul- used with a water and acetonitrile gradient con- try litter microbiota [16]. Saprobic fungi in the taining 0.1% formic acid [21]. Full scans were genera Aspergillus, Fusarium, Mucor, Penicil- acquired in the positive-ion electrospray mode, lium, and others are also found in poultry feed with the capillary exit voltage at either +100 and litter [17, 18, 19, 20]. The objective of this V or variable for molecular weight confirma- study was to determine whether poultry litter tion as the protonated molecule. The analysis materials could affect the degradation of nor- was repeated at +200 V to obtain fragments floxacin by Pestalotiopsis guepini, a fungus with [MH-H2O]+ as the base peak. Norfloxacin known to metabolize fluoroquinolones [21].
metabolites were identified by comparing re-tention times and mass spectra with those pub- MATERIALS AND METHODS
Typical poultry litter materials (10 g of rice hulls, 10 g of pine shavings, or 20 g of ground NMR) spectral analyses were performed at 500 corncobs) were placed in 500-mL mason jars and sterilized by autoclaving for 1 h on each [22] using deuterated methanol as the solvent.
of 2 successive days. Cultures of the fungus The results were compared with those pub- 1325), grown on petri dishes of potato dextrose RESULTS AND DISCUSSION
agar, were macerated in sterile water using ablender. Each jar of litter material was inocu- Pestalotiopsis guepini grew well on rice lated with 10 mL of the blended mycelium.
hulls and corncobs but not on pine shavings.
Norfloxacin was dissolved in 2% aqueous KOH At 20 d, 4 metabolite peaks were detected by (100 mg of norfloxacin per mL) and filter-steri- HPLC in extracts from dosed rice-hull cultures lized, and then 1 mL of this solution was added that were not seen in extracts from control jars.
to each jar together with 40 mL of sterile water.
Two of the metabolite peaks were also detected Controls were prepared using each of the types in extracts from dosed corncob cultures. At 10 of litter material without the fungus or without and 14 d, smaller concentrations of the metabo- norfloxacin. The jars were incubated in the dark lites were observed. Some additional peaks at 28°C. On d 0, 10, 14, and 20, triplicate sets were seen in the corncob and pine-shavings of all cultures and controls were harvested, cultures and controls; the mass spectra of these filtered using glass wool, and extracted 3 times peaks (not shown) indicated that they were not with 100 mL of methylene chloride. The ex- tracts were combined and then evaporated in vacuo. The residues were dissolved in 2.0 mL the peaks collected as they eluted from the HPLC column were used to identify 4 norflox- acin metabolites in the cultures of P. guepini norfloxacin metabolites by high-performance grown on rice hulls dosed with norfloxacin liquid chromatography (HPLC), using a Hew- (Figure 1A); the mass and NMR spectra were lett-Packard Series 1100 liquid chromatograph the same as those published previously [21].
with a Prodigy 5 µm ODS(3) 10.0 × 250 mm The structures of these compounds are shown column. The mobile phase consisted of a water and methanol gradient containing 0.2% acetic amino-1-ethyl-6-fluoro-4-oxo-1,4-dihydro- acid [22] at a flow rate of 3.5 mL/min. The quinoline-3-carboxylic acid (I), and the other diode array detector was monitored at 280 nm, metabolites were N-formylnorfloxacin (III), N- and metabolite concentrations were estimated acetylnorfloxacin (IV), and desethylene-N-ace- tylnorfloxacin (II). Two norfloxacin metabo- lites were identified in cultures of P. guepini trometry analyses were performed on a Hew- during growth on corncobs dosed with nor- 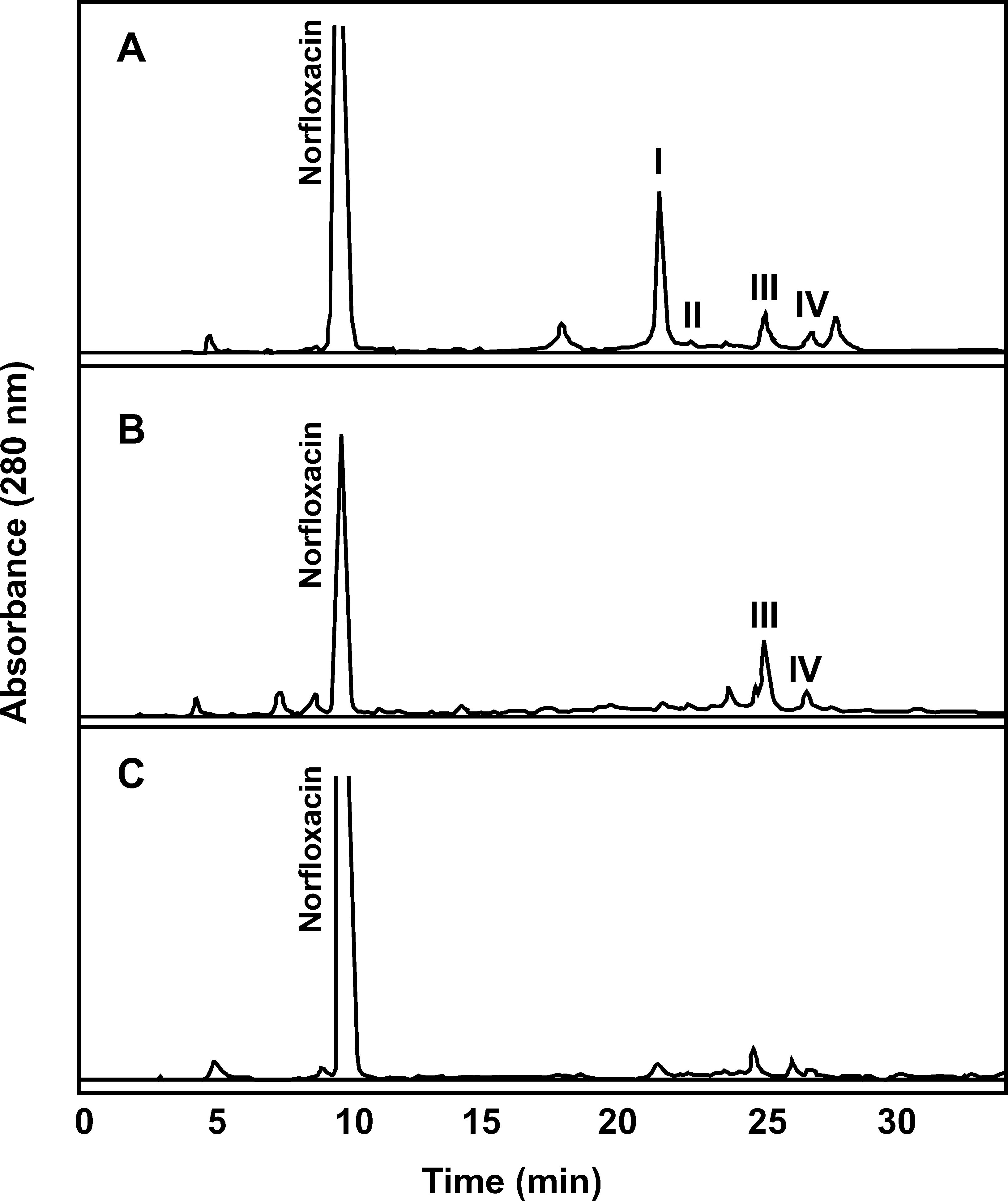 WILLIAMS ET AL.: DRUG DEGRADATION IN LITTER FIGURE 1. HPLC chromatograms (280 nm) of extracts from cultures of Pestalotiopsis guepini grown for 20 d onpoultry litter materials dosed with norfloxacin, showing norfloxacin and fungal metabolites I to IV (A: rice hulls; B:corncobs; C: pine shavings). Peaks representing compounds that were shown by mass spectrometry to be unrelatedto norfloxacin are not numbered.
floxacin (Figure 1B); the major metabolite was The relative amounts of the norfloxacin me- N-formylnorfloxacin (III), and the minor one tabolites produced on poultry litter materials was N-acetylnorfloxacin (IV). Little growth of at 20 d were estimated from the total areas of the fungus was observed on pine shavings, and all the ultraviolet peaks in the HPLC chromato- no norfloxacin metabolites were detected (Fig- grams (Table 1). In rice-hull cultures, 18.4% of the total consisted of 7-amino-1-ethyl-6- 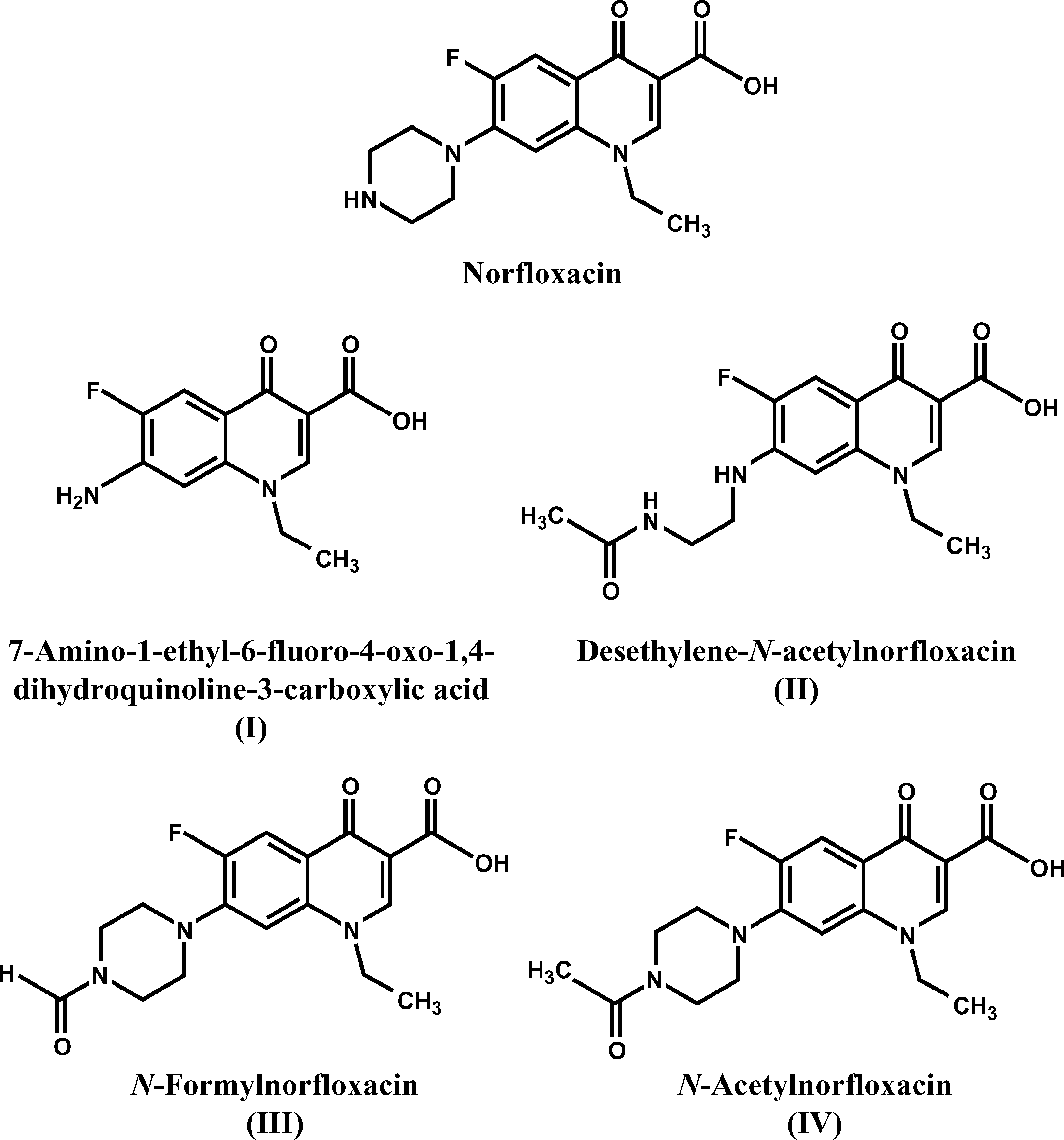