Additive effect of rimonabant and citalopram on extracellular serotonin levels monitored with in vivo microdialysis in rat Ortega J.E.a,*, Gonzalez-Lira V.b, Horrillo I.a, Herrera-Marschitz M.b, aDepartment of Pharmacology, University of the Basque Country UPV/EHU and Centro de Investigación Biomédica en Red de Salud Mental, CIBERSAM, Spain; bMillenium Institute BNI and Programme of Molecular and Clinical Pharmacology, Faculty of Medicine, University of Chile, Chile; cBioCruces Institute, Spain Introduction
Serotonergic and noradrenergic systems have been classically linked to the control of emotions. The increase of serotonin (5-HT) and noradrenaline is a target for antidepressant drugs. In addition, previous studies have revealed that the endocannabinoid system contributes to maintain the homeostasis of mood and emotion [1]. Endogenous cannabinoids act as feedback signaling molecules to homeostatically inhibit presynaptic activity and neurotransmitter release [2]. Moreover, several studies have provided evidence for functional cannabinoid-5-HT interactions [3,4]. The aim of the present study is to evaluate whether the combination of citalopram, a selective serotonin reuptake inhibitor, and rimonabant, a selective CB1 cannabinoid receptor antagonist, represents an effective strategy to enhance serotonergic transmission in the brain. For this purpose a microdialysis approach was applied for monitoring 5-HT concentrations simultaneously in PFC and LC of freely awake rats. Male Sprague-Dawley rats were anaesthetised and placed for stereotaxic surgery with the incisor bar lowered to a 15º angle. One microdialysis probe (2.0x0.25 mm) was implanted in the vicinity of the right LC (AP-3.7; L-1.3; V-8.2, taken in mm from lambda suture point) and the other probe (4.0x0.25 mm) was implanted in the ipsilateral PFC (AP+2.8; L+1.0; V-5.0, taken in mm from Bregma, as previously reported [5]. Around 20 h after probe implantation animals were individually placed in a CMA/120 system (CMA/Microdialysis AB, Sweden) for freely moving animals, and the probes were perfused with a modified CSF solution at a flow rate of 1 l/min that was constant along all the experiment. Following 1 h for stabilisation, dialysate samples were collected every 35 min and 5-HT was assayed immediately by high-performance-liquid chromatography (HPLC) with electrochemical detection. In vitro recoveries were in the range of 10-15%. Drugs were administered i.p. Controls received the proper vehicle. A number of 5 to 13 rats were included in each experimental group. The mean value of the four first basal samples was taken as the 100% value. Measures of extracellular 5-HT concentrations are expressed as percentages of this baseline value. The effects of drug administration were assessed by two-way ANOVA of repeated measures followed by Bonferronis´s test. The area under the curve values (AUC) were calculated by the addition of the percent change from 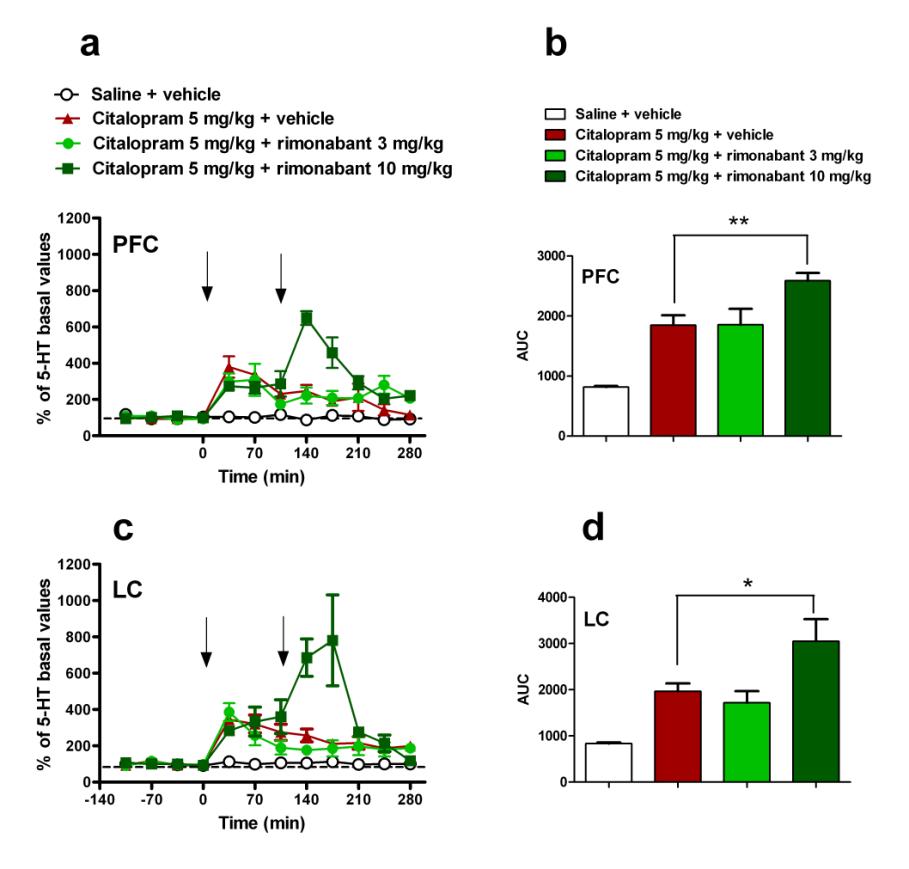 baseline over the entire period after drug treatment. One-way ANOVA followed by Bonferroni’s test was used to compare the AUC of different groups. All results are expressed as meanSEM values and the level of significance was chosen as p=0.05. All statistical procedures were performed using GrahPad PrismMTM (GraphPad Sofware, San Diego, CA, U.S.A.). Results and Discussion
Systemic administration of 3 mg/kg i.p. of rimonabant did not enhanced 5-HT extracellular concentration neither in the PFC nor in the LC. Rimonabant 10 mg/kg i.p. increased 5-HT levels in the PFC (Emax=187±8%) and LC (Emax=214±38%). Citalopram administration (3, 5 or 10 mg/kg i.p.) increased 5-HT in the PFC (Emax=19928%; 36244%; 927293%) and LC (Emax= 1698%; 32836%; 945195%), respectively. The addition of rimonabant (10 mg/kg i.p.) to citalopram (5 mg/kg i.p.) significantly enhanced the effect of the antidepressant in the PFC (Emax =64937%; p<0.001) and LC (Emax =780250%¸ p<0.001). Figure 1. Effects of systemic citalopram administration on extracellular 5-
HT levels simultaneously monitored in PFC (a,b) and LC (c,d). Data are
mean  s.e.m values from 6-13 experiments, expressed as percentages of the
corresponding basal values. First arrow represents administration of citalopram 5
mg/kg i.p., or saline (1 ml/kg). Second arrow represents administration of
rimonabant (3 mg/kg) or vehicle (0.5 ml/kg). (b, d) Raw area under each 280-min time course curve. * p0.05, **p0.001. Data are obtained from one-way ANOVA followed Bonferroni’s test analysis. Taken together, rimonabant increased the acute effects induced by citalopram on 5-HT transmission. These findings might have clinical relevance for the treatment of depressive disorders. The use of a combination therapy could lead to reduction of the doses of SSRIs and thus, their adverse effects, as well to decrease the time lag for the clinical onset. The evaluation of such a strategy under chronic administration paradigms represents a key future development for the use of rimonabant, or other CB1 cannabinoids antagonists, in combination with antidepressants as a potential approach for the treatment of mental disorders. References
Valverde O (2005) Participation of the cannabinoid system in the regulation of emotional-
like behaviour. Curr Pharm Des 11:3421-3429.
Diana MA, Marty A (2004) Endocannabinoid-mediated short-term synaptic plasticity:
Depolarization-induced suppression of inhibition (DSI) and depolarization-induced
suppression of excitation (DSE). Br J Pharmacol 142:9-19.
Egertova M, Cravatt BF, Elphick MR (2003) Comparative analysis of fatty acid amide
hydrolase and cb1 cannabinoid receptor expression in the mouse brain: Evidence of a
widespread role for fatty acid amide hydrolase in regulation of endocannabinoid signaling.
Neuroscience 119:481-496.
Moldrich G, Wenger T (2000) Localization of the CB1 cannabinoid receptor in the rat brain.
An immunohistochemical study. Peptides 21:1735-1742.
Ortega JE, Fernández-Pastor B, Callado LF, Meana JJ (2010) In vivo potentiation of
reboxetine and citalopram effect on extracellular noradrenaline in rat brain by α2-
adrenoceptor antagonism. Eur Neuropsychopharmacol 20:813-822.

Haloperidol long-acting injection (Haldol Decanoate) Your doctor or nurse will inject haloperidol into a muscle in your buttocks. Each injection willlast for four weeks. It is important you keep your regular appointments with your doctor or nurse. There are a number of side-effects which you may experience from this treatment. If you areconcerned about any of these, you should discuss t