Psychopharmacology (2001) 154:61–69DOI 10.1007/s002130000603 Tilman Schulte · Eva M. Müller-Oehring
Hans Strasburger · Heinz Warzel · Bernhard A. Sabel
Acute effects of alcohol on divided and covert attention in men Received: 10 May 2000 / Accepted: 2 October 2000 / Published online: 21 December 2000 Springer-Verlag 2000 Abstract
Rationale: While several studies identified altered visual perceptual performance after alcohol divided attention to be sensitive to alcohol effects, the ingestion. Furthermore, differences between the right impact of alcohol on covert visual attention is still not and left visual field in the cued target-detection task clear, despite the latter’s important role in perception.
indicate that alcohol exerts an influence on right- Objectives: The study tests the effect of acute moderate doses of alcohol on divided and covert attention in right-handed, male volunteers. Methods: The design of the Keywords Alcohol · Covert attention ·
study involved a double-blind trial with an alcohol and a placebo condition; measurements were taken before andafter an oral dose of 0.6 g/kg alcohol versus placebo. Inthe divided-attention task, simultaneous visuo-spatial and auditory stimulation was applied. In a test of covertattention, subjects had to shift their attentional focus Even though every-day experience alerts us to the detri- according to a central cue, from one location in the visual mental effect of alcohol on attention, the precise effect is field to another. Results: Under the divided-attention puzzling. Results from scientific experiments suggest condition, reaction times were significantly prolonged different effects depending upon the subtype of attention after alcohol ingestion compared to placebo. Covert (Koelega 1995). It is well known that divided-attention attention pre-post change was also significantly different tasks are highly sensitive to the effects of alcohol (Landauer between the alcohol and placebo groups. There is a and Howat 1983; Moskowitz and Robinson 1987; reduction of false-cueing disturbance for left-appearing Roehrs et al. 1994). A deterioration in performance is stimuli under moderate alcohol but an increase of distur- seen when two tasks are performed together, compared bance for rightward stimuli, i.e. we found a lateralised to when they are performed singly (Perry and Hodges pattern of reaction for spatial orienting. In the placebo 1999). Road accident data suggest a close relationship group, no significant differences in right-left perfor- between alcohol and attention performance (Buser et al.
mance were obtained. Conclusion: The results suggest 1996; Voas et al. 2000). Johnson (1982) proposes a link that sensory-attentional mechanisms play a key role in between alcohol-related crashes in curves during auto-mobile driving and divided attention. In contrast, Linnoila(1974) and Fagan et al. (1987) report that alcohol does T. Schulte · E.M. Müller-Oehring · B.A. Sabel (✉) not affect vigilance, described as a state of readiness to detect and respond to unpredictable and rare events Otto-von-Guericke University of Magdeburg, Medical Faculty,Leipziger Strasse 44, 39120 Magdeburg, Germany (Broadbent 1971). Similarly, Miles et al. (1986) note that e-mail: [email protected] sustained attention tasks, defined as maintaining attention Tel.: +49-391-6117100, Fax: +49-391-6117103 to a single source of information for an unbroken period of time (Parasuraman and Davies 1984), have consistently failed to reveal alcohol-induced impairments, whereas Otto-von-Guericke University of Magdeburg, tasks requiring selective attention, defined as attending Natural Sciences Faculty, Universitätsplatz 2, to one source of information and excluding another, do reveal such impairments. It is possible that divided attention tasks in general are more sensitive than vigilance tasks, but there may be some types of vigilance task that Otto-von-Guericke University of Magdeburg, Medical Faculty,Leipziger Strasse 44, 39120 Magdeburg, Germany do show alcohol effects (Miles et al. 1986; Rohrbaugh et 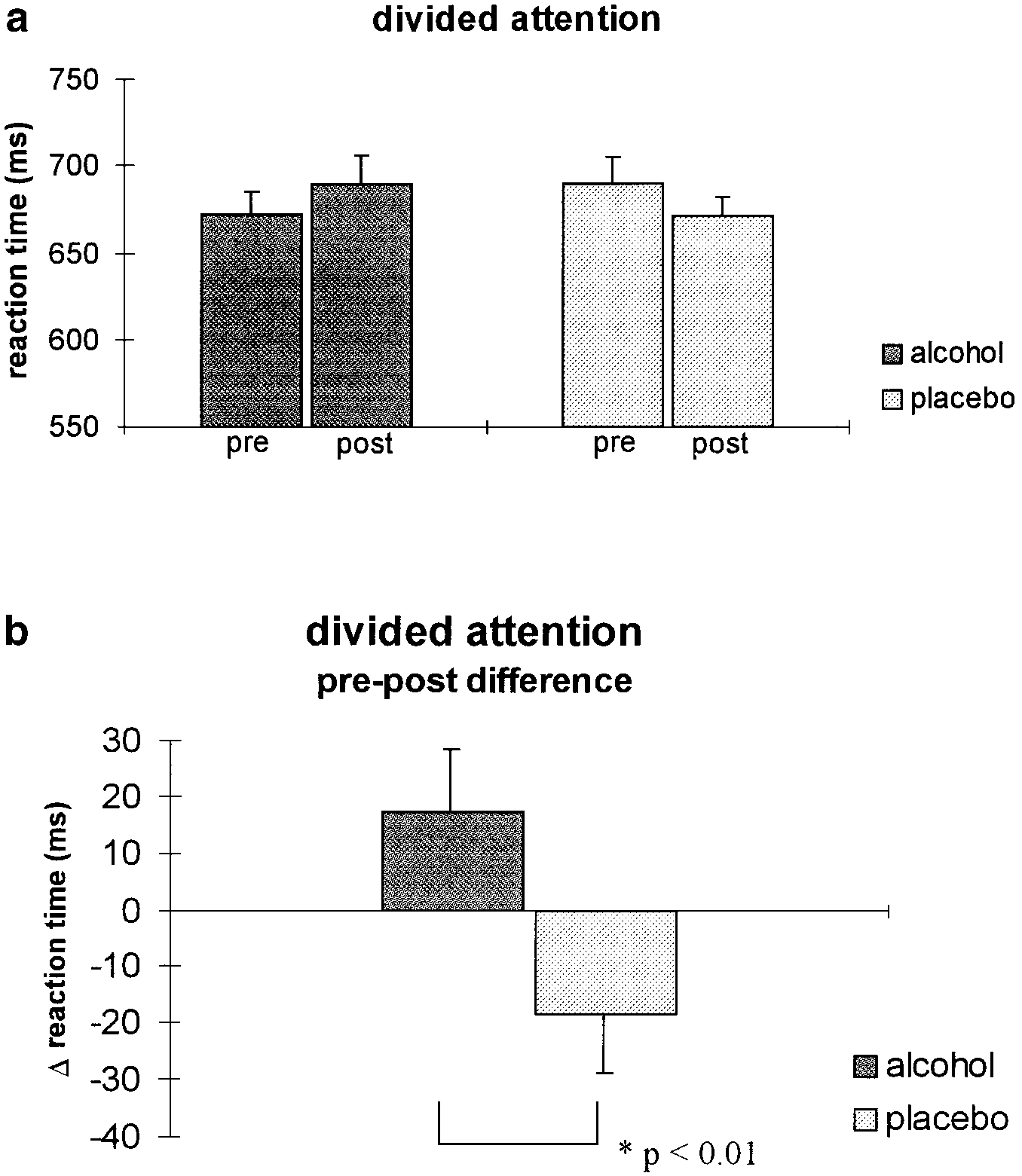 Table 3 Influence of alcohol
on the cue-validity effect in the
times (RT) for valid and invalidcue condition (group means of Influence of alcohol on the cue-validity effect in the visuo-spatial attention task (Posner paradigm). Lateralised validityeffect (leftward cue valid/rightward cue valid) 34.5±5.1
43.2±5.1
21.3±6.4
56.1±7.4
–13.2±6.6
35.9±6.2
49.5±6.6
28.4±5.6
44.8±7.5
–7.5±5.6
–4.7±6.4
measurement (P<0.0001 in all four cases; Wilcoxonsigned-rank test; Table 3).
To test the effect of alcohol on spatial orienting, the validity effect (difference of RT between valid-cue andinvalid-cue cases) was computed for both groups. Inneither group was there a significant pre-post change inthe validity effect over all trials. However, when wereanalysed the data separately for the right versus left Fig. 2a, b Reaction time measurement in divided-attention task.
hemispace (or visual hemifield, respectively), we found a Group mean±SEM. b Difference between alcohol-group and
placebo-group (pre-post difference)
a significantly reduced validity effect for the left visualfield (right cerebral hemisphere) in the alcohol group(P=0.036), but not in the placebo group (Table 4).
in the error rate (P<0.03) and reaction times (P<0.01, Moreover, we observed such a left-right asymmetry Mann-Whitney U-test; Table 2). Reaction times decreased of the validity effect already at pre-measurement in the placebo group during the auditory task (by (P<0.05 in the placebo group and a tendency, P=0.094 in 35.6 ms), probably due to increased familiarity with the the alcohol group), with the asymmetry substantially task (practice effect), so alcohol effects must be calculated increased in the post-measurement, for both groups as difference from the placebo values (see Fig. 2a, b).
(P<0.001 and P<0.003 for the alcohol and the placebo There is a relative increase in the alcohol group, of group, respectively; Table 4). In all comparisons, the 40.5 ms in the visual task and of 29.8 ms in the auditory validity effect to the leftward targets (valid leftward cue task. Note that the effects were not strong enough to reach minus invalid rightward cue) is smaller than the one for significance when the two sensory tasks were considered the rightward targets. Since we were mainly interested in alone (P=0.21, P=0.06, visual and auditory, respectively). whether this asymmetry would be influenced by alcohol, In the visuo-spatial attention task, reaction times are we computed the pre-post differences of the validity generally shorter in the valid-cue than in the invalid-cue effects and compared those between left and right hemi- condition. This finding was confirmed here for both the space. We found further asymmetry in the alcohol alcohol and placebo group and both for pre- and post- (P<0.05), but not in the placebo group (P=0.72) (Table 4 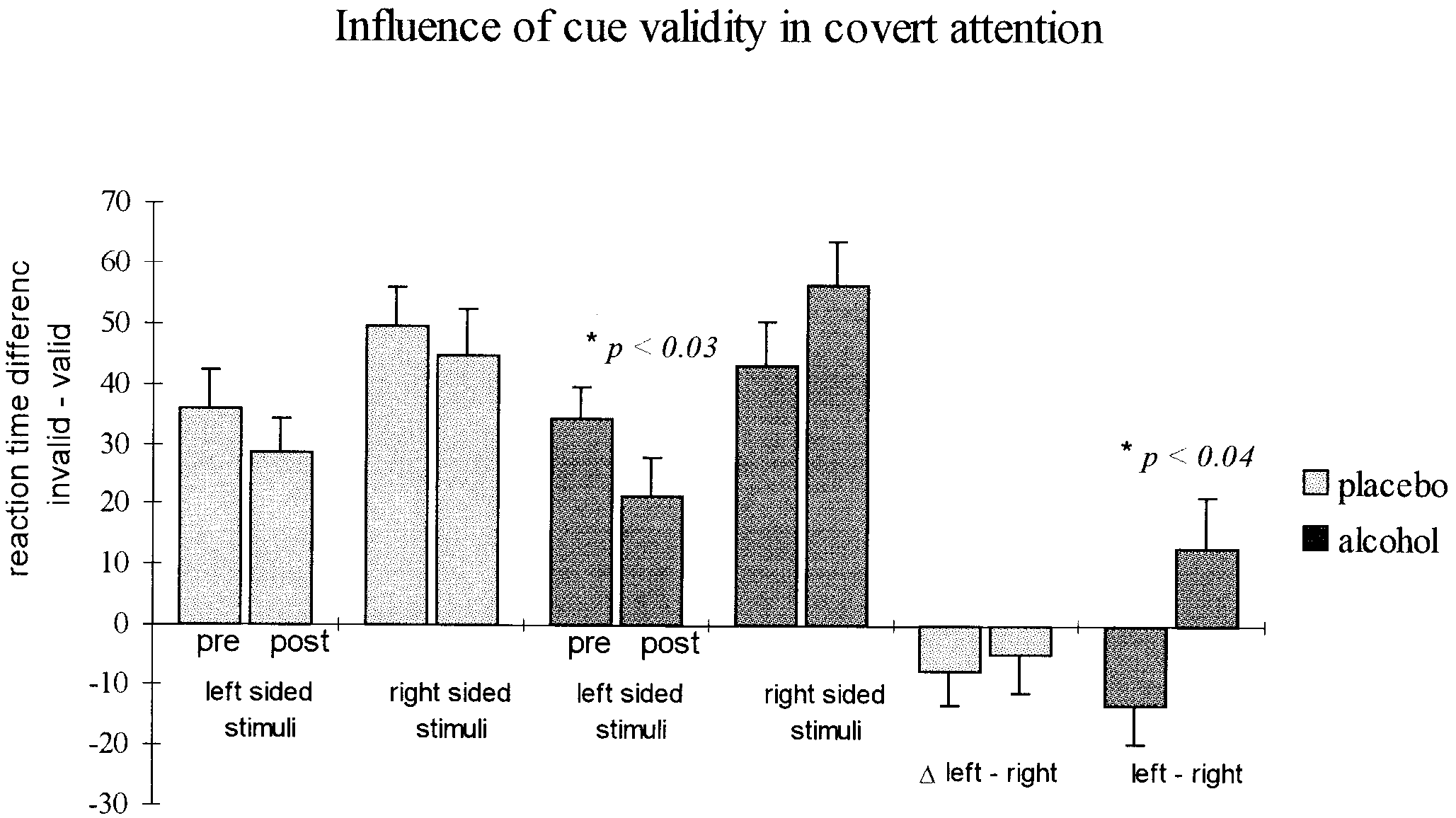