Figure 1. Mean values and standard deviations for subjective measures of state anxiety and heart rate during speaking alone before (i.e.,the anticipation group) or after (i.e., the comparison group) speaking in public for 18 individuals with social phobia.
reconstructed to a 128 ϫ 128 matrix with a pixel size of 2 mm ANATOMICAL STANDARDIZATION. Normalization of all
individual CBF images into a standard brain shape (Greitz et al The two groups did not differ in trait anxiety as they had 1991) was performed automatically by matching the scan with similar scores on the SPS (t Ͻ 1, df ϭ 16, ns), the SIAS 20-cm axial coverage to an atlas template (Andersson and (t Ͻ 1, df ϭ 16, ns), the PRCS (t Ͻ 1, df ϭ 16, ns) and the Thurfjell 1997). The images from the four emission scans were STAI-T (t Ͻ 1, df ϭ 16, ns).
automatically aligned to the 20-cm scan (Andersson 1995),bringing them into the stereotactic space and correcting for head movements between scans. The stereotactic space was definedbased on the postmortem slicing of a single subject in which The anticipation group as compared with the comparison brain contours, gyri, sulci, central structures, and Brodmann group displayed higher heart rate (t ϭ 2.5, df ϭ 16, p Ͻ areas were defined (Greitz et al 1991). The cerebral brain atlas .01) and state anxiety ratings (STAI-S: t ϭ 1.8, df ϭ 16, software (Thurfjell et al 1995) allows for identification, in terms p Ͻ .05), but did not differ in fear (t Ͻ 1, df ϭ 16, ns) or of anatomy, cytoarchitecture, and Talairach coordinates (Ta- distress (t Ͻ 1, df ϭ 16, ns) (See Figure 1).
BLOOD FLOW RECORDINGS. An ANOVA (Friston et al
1995) with one between group factor (the anticipation group vs.
the comparison group) was used. To account for between subject When counting words it was found that there were no variance and to evaluate anticipatory anxiety we only used the significant difference between the anticipation group and first of the two normalized rCBF images from the speaking alone the comparison group (t ϭ Ϫ.93; df ϭ 16; ns).
condition to be compatible to a random effects model (Peterssonet al 1999). Global flow was estimated using a predefined mask outlining the brain, but excluding all voxels which changed as aconsequence of study conditions using F-map masking (Anders- The state related anxiety reaction associated with antici- son 1997). PET data were normalized for global flow using linear pation was accompanied by enhanced rCBF in the right scaling (Andersson 1997). The contrast generated a t map that dorsolateral prefrontal and left inferior temporal cortices, was subsequently converted to a z score map through a proba- as well as in the left amygdaloid-hippocampal region (x ϭ bility preserving transformation (Friston et al 1991). The signif- Ϫ27, y ϭ Ϫ13, z ϭ Ϫ13; maximum z value ϭ 2.58, p ϭ icance of the z score maps was evaluated at an omnibus level .005 uncorrected for multiple comparisons) (See Figure 2 using the mean square z score (Worsley et al 1995). Local changes were evaluated using the spatial extent of connected Brain blood flow was lowered in the left temporal pole clusters of voxels with a z score above 2.6 (Friston et al 1994).
This test takes into account multiple comparisons and has a and bilaterally in the cerebellum in the anticipation as cluster-localizing power (Friston et al 1996). The directed search compared with the comparison group (See Table 1).
for amygdala activation was performed by comparing the two Because the design is unbalanced in that individuals in groups using a z threshold of 2.58 corresponding to an uncor- the anticipation group always performed their private rected (one tailed) p of .005.
speech first, we performed a linear trend analysis to 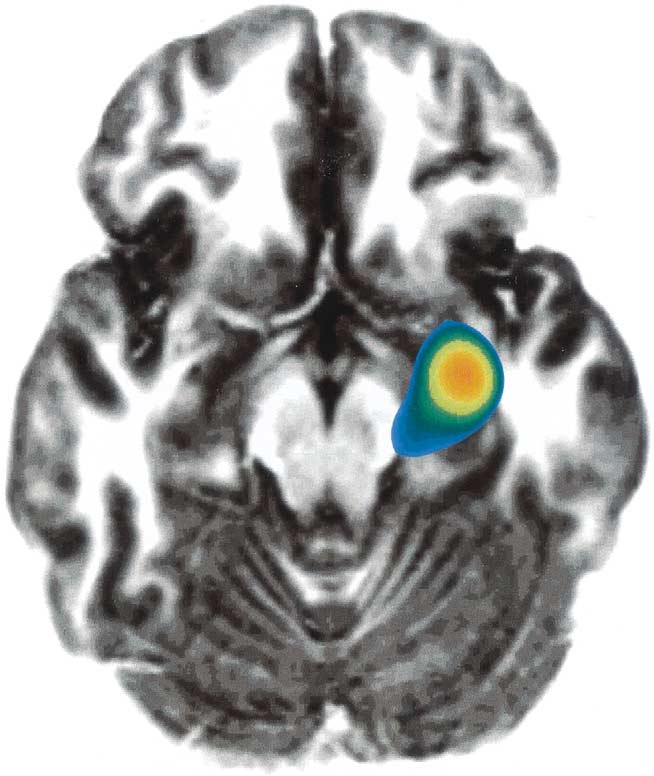