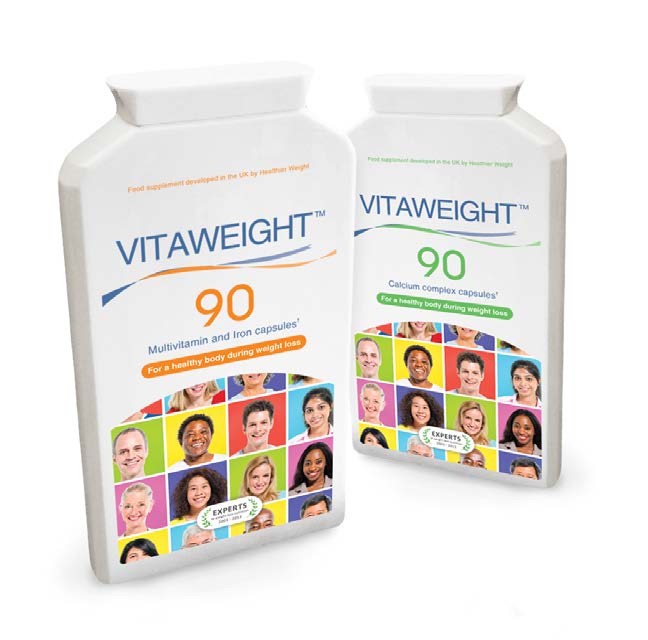 A comparison of
VitaWeightTM and Forceval®
Dr David Ashton
September 2013

VitaWeight™ Versus Forceval®
All surgical weight-loss patients need to take vitamin and minerals (micronutrient) supplements for life. Standard products, readily available at high-street pharmacies, are wholly inadequate, both in terms of the concentrations of micronutrients and in the specific formulations. In other words, they simple don’t have enough of the micronutrients and/or they have the wrong micronutrients. Forceval® is a vitamin and mineral supplement commonly prescribed for surgical weight-loss patients in the UK and other European countries. Unfortunately, even Forceval® is inadequate in a number of important respects. The concentrations of some essential vitamins and minerals are simply inadequate for the post-surgical patient, whilst other important ingredients are missing altogether. In Table 1, the concentration of vitamins and minerals in the VitaWeight™ formulae are compared with Forceval®. The essential differences between the two are as follows: VitaWeight™: the basic dosage is one multivitamin capsule plus one calcium capsule. They should
be taken separately (at least a few hours apart) as the calcium may interfere with the absorption of iron1.
Forceval®:
calcium and iron are included in the same capsule which may reduce the proportion of iron absorbed. Vitamin B12

Expert guidelines for supplementation in post-surgery patients recommend 350-500 µg/day of
crystalline B122.
VitaWeight™: 350µg in one capsule – more than 100 times that of Forceval®. The great advantage of
this is that patients taking VitaWeight™ don’t need B12 injections.
Forceval®:
3µg in one capsule so patients will require quarterly B12 injections. Vitamin B1 (Thiamine)
Vitamin B1 (Thiamine) deficiency after bariatric surgery is uncommon (0.02%), but the consequences may be extremely serious as in Wernicke-Korsakoff Syndrome (WKS). WKS has been reported after LAGB, RYGBP and BPD/DS3-5. VitaWeight™: 10mg in one capsule (1000% of the RDA for Vitamin B1)

Vitamin K1 is involved in blood coagulation, whereas K2 helps to direct calcium into bone and blood,
rather than arteries, muscle or other soft tissues6. Studies now indicate that vitamin K2 also works to
prevent certain cancers and bone loss7,8.

VitaWeight™: Vitamin K1 and K2 are included. There are several active forms of vitamin K2: MK4,
MK7, MK8 and MK9 and the VitaWeight™ formula includes the MK-7 form which is the most relevant to health.
Forceval®:
Vitamin K is not included in the Forceval® capsule. Vitamin D

Vitamin D2 has a much lower potency and a shorter duration of action when compared with vitamin
D3. In fact, vitamin D2 has a potency less than one-third that of vitamin D39.

VitaWeight™: VitaWeight™ includes the D3 (cholecalciferol) form rather than the D2

Inositol has been shown to be closely involved in insulin signalling and increases insulin sensitivity10.
In women with PCOS it has been shown to reduce testosterone, acne and hirsutism and may also
reduce the risk of diabetes11,12.

The ASMBS recommendations for iron dosage are 18-27mg/day2.

VitaWeight™: The VitaWeight™ formula has ferrous bisglycinate. This is important because the
bisglycinate salt is less irritating to the gastric mucosa and therefore has significantly fewer side effects such as nausea, epigastric pain and vomiting13. In addition, we have a significantly higher dose of iron.
Forceval®:
Boron makes an important contribution to bone health both directly through its actions on osteocalcin28, but also indirectly through its effects on other vitamins and minerals such as calcium, vitamin D and magnesium29-32. VitaWeight™: The VitaWeight™ calcium capsule also includes boron.
Forceval®:

ASMBS Guidelines specifically recommend calcium citrate2 as it can be taken with or without food
and does not constipate. Importantly, it is the one calcium compound that does not require acid to
break it down. This is relevant for post-surgery patients who may produce less acid than previously
and who may also be taking acid-blocking medications (PPI’s or H2 blockers). Calcium citrate has
been shown to have a better absorption profile than other calcium salts, especially calcium
carbonate14.
Reports of hypocalcaemia after gastric bypass are inconsistent. Some studies report perfectly normal calcium levels after several years of follow-up and one study reports normal calcium absorption15-18. This is because if dietary calcium is not available or intestinal absorption is impaired by vitamin D deficiency, calcium homeostasis is maintained by increases in bone resorption. Recent studies have shown a possible increase in cardiovascular disease with in women with daily calcium supplement intakes above 1400mg19,20. Major reductions in calcium levels are not observed after sleeve gastrectomy or adjustable gastric banding21,22,17. Recommendations for calcium supplementation after bariatric surgery vary widely, with no consensus
as to the correct dosage.
VitaWeight™: The VitaWeight™ formula has 200mg of calcium citrate, but combined with
magnesium, vitamin K1 and boron to optimise bone health. Since sleeve and bypass patients are recommended to take three capsules per day, the minimum dose of calcium is 600mg. This should be monitored at intervals.
Forceval®:
Does not follow the ASMBS guidelines and instead uses calcium carbonate Magnesium (Mg)
Magnesium is increasingly recognized as an important contributor to bone health23-25. Apart from direct effects on the structure and the cells of the skeleton, Mg deficiency acts indirectly by affecting the homeostasis of the two master regulators of calcium homeostasis, i.e., parathyroid hormone (PTH) and 1,25(OH)2-vitamin D thus leading to hypocalcemia26. A study of women with osteoporosis in Israel reported significantly increased bone mineral density with 250 mg/day of magnesium supplement when compared to a control group who did not take magnesium supplements27. VitaWeight™: VitaWeight™ has a generous concentration of magnesium (both capsules contain

Note that the values shown are for 1 capsule of Forceval® versus one VitaWeight™ Multivitamin
capsule + 1 calcium capsule.

Reducing pharmaceutical waste from patient care settingsScientists are detecting concentrations of pharmaceuticals in streams and rivers across the nation, according to the U.S. Geological Survey. Epinephrine is a commonly used drug. It is This is due in part to pharmaceuticals entering found on crash carts and used in many surgical the sewer system, through excretion of partially applic

RUSSIA AND THE GLOBAL NATURAL GAS MARKET Russia is the world’s largest reserves-holder, producer and exporter of natural gas and is playing a significant role in development of the European gas market and as an important player in gas deliveries to Former Soviet Union countries. Russia has the world’s largest natural gas reserve base. The estimates for the country’s proved natural ga