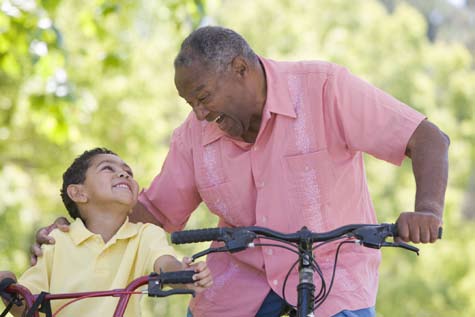 Treating BPH
Evolving treatment increases patient options By Scott Pike, MD &
Peter M. Knapp, Jr., MD
Benign prostatic hyperplasia (BPH), or enlarged prostate, potential sources of obstruction. is a condition that affects many men. While the exact Urodynamic studies may be performed to incidence is unknown, a clear trend in prostate growth evaluate bladder function. These can help and worsening symptoms is noted with advancing age. differentiate bladder outlet obstruction Common symptoms include weak urinary stream, the sensation from patients with a neurogenic bladder.
of incomplete bladder emptying, dribbling after voiding, frequent Several nonsurgical and surgical treatment urination particularly at night (nocturia), straining to begin urination, options exist for BPH. As long as the the sudden urge to urinate or interrupted stream. Severe cases condition is not life-threatening, treatment can lead to blood in the urine (hematuria), development of bladder is often dictated by a patient’s symptoms. stones or acute urinary retention and subsequent renal failure. Patients with mild-to-moderate symptoms are often initially managed with watchful- Evaluation includes a history and physical measurement of urinary flow rate, residual waiting and/or medical therapy. examination including a digital rectal urine, cystoscopy and urodynamic testing, When medical therapy is initiated, alpha- examination (DRE), PSA test and AUA and transrectal ultrasound to accurately blockers are commonly prescribed as first symptom index. The AUA symptom measure prostate size.
line treatment. This class of medication, determine the severity and bother of a Post void residual (PVR) measures the tamsulosin and alfuzosin works to relax patient’s symptoms; seven parameters volume of urine that remains in the bladder the prostatic smooth muscle, thereby are evaluated and rated on a scale of 1 to after voiding. This can be measured improving symptoms of BPH. Alpha- 5. An AUA score of 0 to 7 means that the noninvasively with a transabdominal blockers demonstrate a rapid clinical condition is mild, 8 to 19 is considered ultrasonography. moderate and 20 to 35 is severe. Cystoscopy is often performed if invasive Their safety and efficacy has been Additional in-office testing may help treatment is considered. Cystoscopy is demonstrated in multiple studies. Side establish the diagnosis and determine performed in the office to evaluate the effects including dizziness, orthostasis, treatment selection. Testing may include lower urinary tract anatomy and other rhinitis and abnormal ejaculation can be 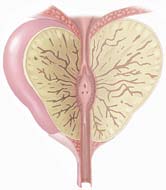 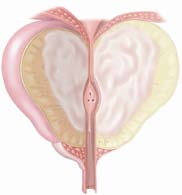 many patients can stop taking medication one to two months A second class of drugs, known as 5-alpha reductase inhibitors (finasteride, dutasteride), work by reducing prostate volume. Laser vaporization (PVP) of the prostate is performed as an Whereas alpha-blockers are rapid in their onset of action, outpatient under general anesthesia. The procedure is performed 5-alpha reductase inhibitors may take up to six months before in 30 to 60 minutes and provides rapid improvement in urinary maximal reduction in prostate volume is achieved. Long term symptoms and return to regular activity in 5 to 7 days. Most safety and durability of efficacy has been demonstrated in patients are able to discontinue medication shortly after surgery. multiple studies. 5-alpha reductase inhibitors are also useful in the management of prostate-related bleeding. Side effects Other surgical procedures include transurethral resection including decreased libido, ejaculatory disorder and erectile of the prostate (TURP), holmium laser enucleation of the dysfunction are seen in a small number of patients. 5-alpha prostate (HOLEP), and open prostatectomy. These procedures reductase inhibitors have demonstrated a decrease in the are sometimes needed in certain circumstances and require incidence of acute urinary retention and the need for surgical intervention for BPH. In candidates for prostate cancer screening, a PSA should be determined before and roughly Treatment of obstructive BPH has evolved over the years six months after the initiation of 5-alpha reductase inhibitors. offering patients many treatment options including medications If an appropriate decrease in the PSA is not appreciated, a and minimally invasive treatments in the office or outpatient prostate biopsy is strongly considered.
surgery center. Urology of Indiana continues to utilize the most advanced treatment techniques to effectively treat patients with obstructive voiding symptoms secondary to BPH.
Scott C. Pike, M.D. is a graduate of Indiana University,
in Bloomington, Indiana, where he received his B.S. in
Biology, with Distinction. He earned his medical degree
from the Indiana University School of Medicine, in
Indianapolis, and completed his Urology residency at
Northeastern Ohio Universities College of Medicine,
in Akron, Ohio.
Dr. Pike is a member of the American Urological Association, the Endourological Society, and the American Medical Association. His areas of special interest include urologic oncology, stone disease, and minimally invasive surgery. Courtesy of American Medical Systems®, Inc., Minnetonka, Minnesota Combination therapy with both an alpha-blocker and a 5-alpha Peter M. Knapp, Jr., M.D. is a graduate of Indiana
reductase inhibitor has been demonstrated as the most effective University and the Indiana University School of means of preventing disease progression. Medicine. He completed his general surgery internship and urology residency at the University of Michigan Patients that fail to improve with medical therapy or cannot Hospitals in Ann Arbor, Michigan. He entered private practice in July of 1985.
tolerate the side effects of medical therapy or simply wish to stop taking their medication may elect to have more definitive Dr. Knapp is certified by the American Board of treatment. Further therapeutic options include office based Urology. He is a Fellow of the American College of Surgeons and a Clinical procedures performed under local anesthesia or outpatient laser Associate Professor of Urology at Indiana University School of Medicine. He is a member of the American Urological Association, the Society for procedures utilizing a general anesthetic.
Urodynamics and Female Urology, the Endourologic Society, and the Soceity of Laparoscopic Surgeons.
The office based procedures include transurethral microwave thermotherapy (TUMT) and transurethral needle ablation Dr. Knapp has a special interest in female urology, urinary incontinence, and other bladder control problems in men, women, and children. He is a (TUNA) using radiofrequency. The office based procedures Medical Director of UroPoint Bladder Control Centers and is an instructor can be performed in less than one hour and allow patients to in the Female Medicine and Pelvic Reconstructive Surgery Fellowship at return to regular activity the following day. Results vary but Indiana University School of Medicine.
www.urologyin.com 9

CoPaCC - comparing PCCs, sharing best practice CoPaCC Thematic “PCC Statutory Transparency” November 2013 Foreword “A democracy requires accountability, and accountability requires transparency” “A lack of transparency results in distrust and a deep sense of insecurity” Ever since King John was made to sign the Magna Carta in 1215, the general trend over the following

Unusual base pairing during the decoding of a stopcodon by the ribosomeIsrael S. Ferna´ndez1, Chyan Leong Ng1{, Ann C. Kelley1, Guowei Wu2, Yi-Tao Yu2 & V. Ramakrishnan1During normal translation, the binding of a release factor to one ofthe three stop codons (UGA, UAA or UAG) results in the termi-nation of protein synthesis. However, modification of the initialuridine to a pseudouridi