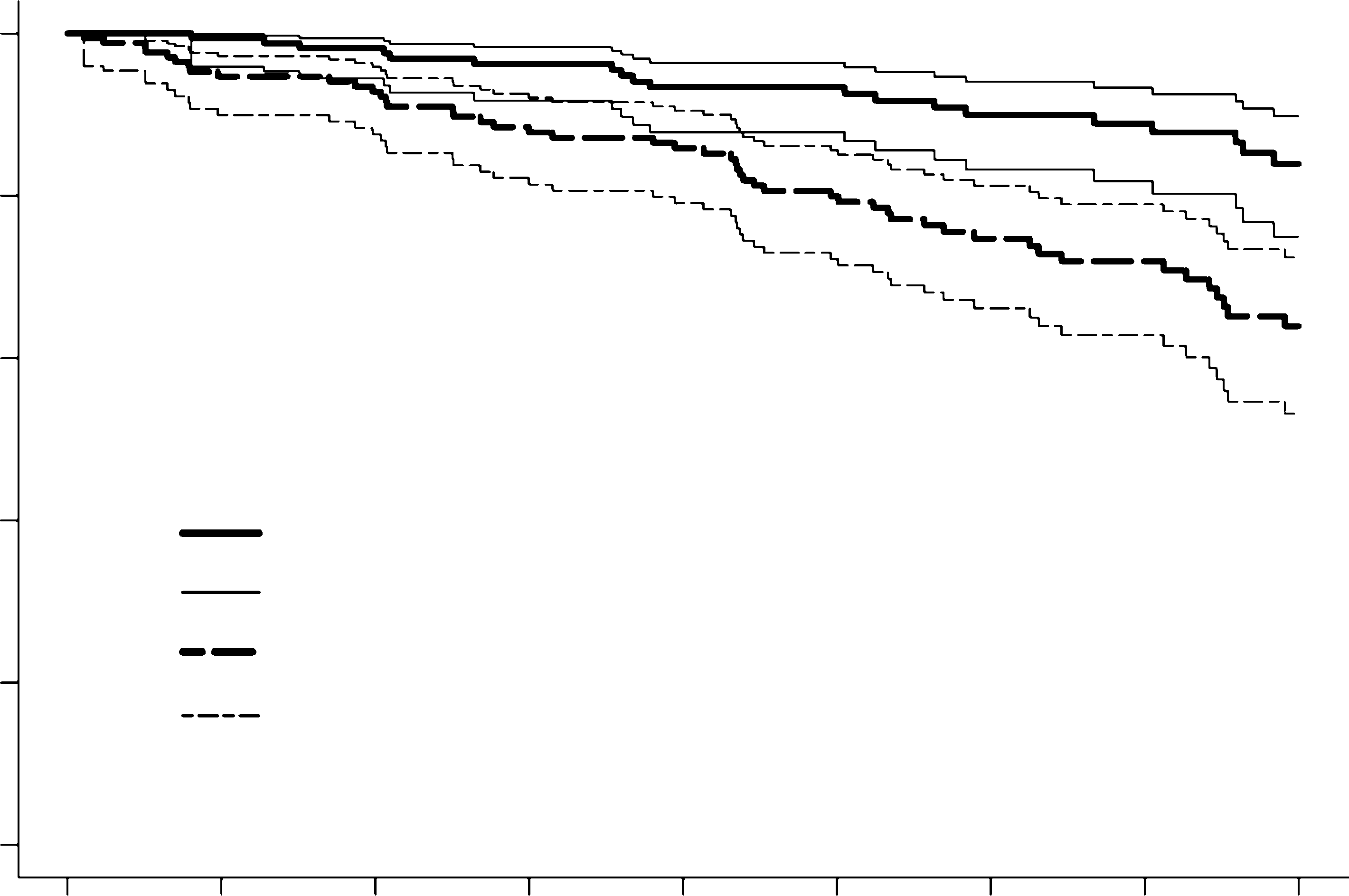 contact. For those in the California non-ITB cohort, the Table I: Demographics of persons with cerebral palsy with (Minne- corresponding rule was to censor 6 months after last DDS sota) and without (California) intrathecal baclofen (ITB) pumps evaluation or on 31 December 1995, whichever was earlier.
This rule applied to approximately 15% of the entire California non-ITB cohort (and to a similar proportion ofthe final random sample).
To estimate how much of the difference in survival probabilities may have been due to overall improvement in survival from the earlier period of the California non-ITB cohort follow-up to the later period of the Minnesota ITB cohort follow-up, an adjustment was made based on a decline in mortality rate of 3.4% per year reported by Strauss et al.15 for children with severe CP (roughly equivalent to GMFCS levels IV and V) and children and Statistical analyses were carried out using SAS ⁄ STAT version 6.12 (SAS Institute, Cary, NC, USA), with S-PLUS version 4.0 (Insightful Corp. ⁄ Tibco Spotfire, Palo After exclusions, 359 participants with ITB pumps from Gillette (Minnesota) were identified (202 males, 157 females; mean age 12y 8mo, SD 7y 9mo, range 3y 1mo to 39y 9mo). The number in the comparison cohort from California without ITB pumps matching these was 349 (195 males, 154 females; mean age 12y 7mo, SD 8y 4mo, range 2y 7mo to 40y). The distribution of participants byGMFCS level, gastrostomy versus oral feeding, presence aYear pump placed in the Minnesota ITB cohort. GMFCS, Gross or absence of epilepsy, and age is shown in Table I.
Motor Function Classification System.
The mean follow-up was 6 years 2 months (SD 3y) in the Minnesota ITB cohort and 6 years 2 months (SD 2y 6mo) in the California non-ITB cohort. During follow-upthere were 21 deaths in the Minnesota ITB cohort and 50 deaths in the California non-ITB cohort. Survival at8 years after time zero was 92% (SD 1.9%) in the Minne- sota ITB cohort and 82% (SD 2.4%) in the California non-ITB cohort (Fig. 2). These were statistically signifi- cantly different (p<0.001). However, the cohorts were not matched for calendar year; with an approximate adjustmentto account for recent trends in improved survival in CP as reported by Strauss et al.,15 the 8-year survival in the Cali- Years since pump implantation (MN) or age at matching (CA) fornia non-ITB cohort increases to 88% (Fig. 3). Assumingthe adjustment to be exact and using adjusted observed andexpected numbers of deaths in the California non-ITB Figure 2: Survival of persons with cerebral palsy with (Minnesota, cohort in calculating the log-rank statistic, the difference MN) and without (California, CA) intrathecal baclofen pumps.
in survival curves was no longer significant (p=0.073).
DISCUSSIONITB pumps are usually implanted in persons with CP who further adversely affect survival. We are reassured that our are most at risk for premature death, so we were concerned study has shown that survival is comparable to, or some- that the risks known to be associated with ITB might what better than, a matched cohort without pumps. The Developmental Medicine & Child Neurology 2009 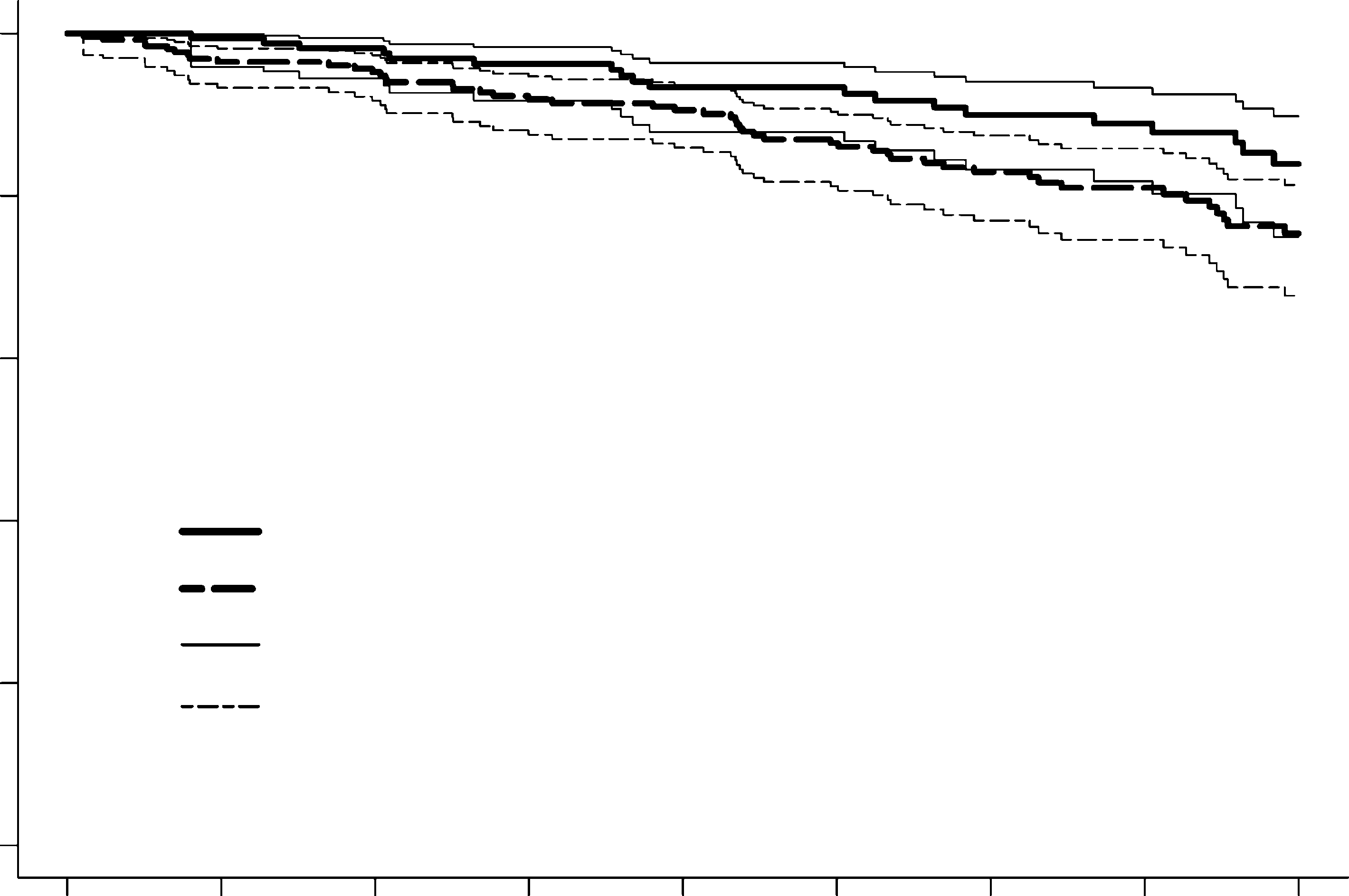 levels or were older and not fed via gastrostomy, the adjust-ment (from Figs 2 and 3) may overestimate the improve- ment in survival in the California non-ITB cohort. In anyevent, it is unclear how much of the improved survival over recent years might be attributable to improvements andinnovations in medical care and treatment, which may California with secular adjustment (lower curve, dashed) Another limitation relates to the assignment of GMFCS level, and thus the matching of the cohorts by level ofmotor function. Assignment of GMFCS levels was meth- odologically different for the two cohorts, and conversion Years since pump implantation (MN) or age matching (CA) of motor function information on the California CDER toGMFCS level has not been validated. Assuming that the Figure 3: Survival of persons with cerebral palsy with (Minnesota, matching of GMFCS levels is appropriate, there is a fur- MN) and without (California, CA) intrathecal baclofen pumps, with ther limitation relative to the survival analyses, as, within a secular adjustment. CI, confidence interval.
given level of GMFCS, differences in level of gross motorfunction may still exist and can affect survival.
Finally, the analyses were retrospective and involved survival in California has been shown to agree closely with cohorts followed by different professionals at different that in the UK and Australia (matched for important func- locations, and with different frequencies of follow-up. For tional variables).17 The only outcome addressed in our persons who were lost to follow-up, data were censored study is survival; other benefits of ITB therapy have been 1.5 months after last contact in the Minnesota ITB cohort previously reported and include tone reduction, comfort, and 6 months after last DDS evaluation in the California ease of care, and decrease in number of anticipated ortho- non-ITB cohort. These censoring rules were used (rather than censoring exactly at time after the last visit or evalua- The most obvious limitation of the present study was tion), as visits typically occurred every 3 to 6 months in that the cohorts were not prospectively randomly assigned.
Gillette (Minnesota), and annually in California. However, However, blinding of observation would not be relevant variations in the censoring rule, including censoring at with the outcome measure of survival, and implementation time of last contact, had only a marginal impact on the of a randomly assigned study would be impossible in cur- actual estimates of survival. For example, censoring exactly rent practice. In addition to the lack of random assignment at the time of last contact changed the estimated 8-year to treatment groups that could have lead to selection bias, probability of survival from 92.0% to 91.9% for the Min- our comparison was further compromised by the fact that nesota ITB cohort and from 82.0% to 81.8% for the the cohorts were not contemporaneous, and secular trend adjustments can only be approximate. The adjustment Notwithstanding the stated limitations, clinicians can made to account for the decline in mortality rates from find some reassurance in the finding that survival in per- 1988 to 2000 was based on results for children aged up to sons with CP who have severe motor impairment appears 15 years with the most severe impairments due to CP and not to be adversely affected, and could possibly be for children and adults who were fed by gastrostomy improved, with ITB therapy. It will be challenging to tube.15 As approximately 36% of the California non-ITB design and implement a study to address this question cohort in the present study were functioning at higher 3. Albright AL, Gilmartin R, Swift D, Krach 1. Matthews DJ, Wilson P. Cerebral palsy. In: Molnar GE, Alexander MA, editors. Pediat- term intrathecal baclofen therapy for severe 5. Gerszten PC, Albright AL, Johnstone GF.
ric rehabilitation. 3rd edn. Philadelphia, spasticity of cerebral origin. J Neurosurg PA, USA: Hanley & Belfus, 1999: 193–217.
2. Kolaski K, Logan LR. Intrathecal baclofen assessment following intrathecal baclofen therapy in children with spastic cerebral Survival with Intrathecal Baclofen in CP Linda E Krach et al.
6. Krach LE, Kriel RL, Gilmartin RC, et al. 14. Hemming K, Hutton JL, Colver A, Platt MJ. Regional variation in survival of peo- thecal baclofen infusion. Pediatr Rehabil ple with cerebral palsy in the United King- 22. State of California. Annual mortality tapes, dom. Pediatrics 2005; 116: 1383–90.
7. Krach LE, Kriel RL, Gilmartin RC, et al. 15. Strauss D, Shavelle R, Reynolds R, Department of Health Services, Center for Hip status in cerebral palsy after one year Rosenbloom L, Day S. Survival in cerebral Health Statistics, Office of Health Informa- palsy in the last 20 years: signs of improve- sion. Pediatr Neurol 2004; 30: 163–8.
ment? Dev Med Child Neurol 2007; 49: 23. Kleinbaum DG. Survival analysis: a self- KW, Glutting JW, Miller F. The risk of 16. Strauss D, Brooks J, Rosenbloom L, Shav- progression of scoliosis in cerebral palsy elle R. Life expectancy in cerebral palsy: an 24. Van Schaeybroeck P, Nuttin B, Lagae L, patients after intrathecal baclofen therapy.
Schrijvers E, Borghgraef C, Feys P. Intra- 9. Shilt JS, Lai LP, Cabrera MN, Frino J, 17. Shavelle RM, Straus DJ, Day SM. Com- trolled, double-blind study. Neurosurgery clofen on the natural history of scoliosis in cerebral palsy. J Pediatr Orthop 2008; 28: 25. Peter JC, Arens LJ. Selective posterior 18. Katz RT. Life expectancy for children 10. Ginsburg GM, Lauder AJ. Progression of with cerebral palsy and mental retardation: young adults with spastic cerebral palsy. Br scoliosis in patients with spastic quadriple- implications for life care planning. Neuro- gia after the insertion of an intrathecal ba- clofen pump. Spine 2007; 32: 2745–50.
19. California Department of Developmental 11. Coffey RJ, Edgar TS, Francisco GE, et al.
Abrupt withdrawal from intrathecal baclo- patients with spasticity. Phys Ther 1995; Arch Phys Med Rehabil 2002; 83: 735–41.
20. Citygate Associates. Independent evalua- study of intrathecal baclofen using a pro- Services’ community placement practices: patients with cerebral palsy. NeuroRehabil- 13. Hutton JL, Pharoah PO. Effects of cogni- 21. Palisano R, Rosenbaum P, Walter S, Rus- tive, motor, and sensory disabilities on sur- and reliability of a system to classify gross Developmental Medicine & Child Neurology 2009

Revista_comunicare_30.qxd 12/13/2013 2:56 PM Page 101 Review of The Interpersonal Communication Book , 13th edition by Joseph A. Devito, New York: Pearson, 2012, 432 pages The topic of interpersonal communication has recently gained increasing acknowledge-ment as a separate field of study in the broader family of communication studies, in a changeof perspective that now takes our daily on