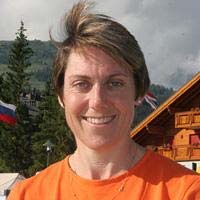 An interview with Anne Gripper Part 1, August 1, 2007
Getting a grip on doping
The past year has seen an acceleration in the fight against the
use of performance-enhancing substances, with the
Operación Puerto and the Floyd Landis cases acting as a
major catalyst. Australian Anne Gripper has been involved in
co-ordinating the UCI's anti-doping measures and talked to
Cyclingnews' Shane Stokes about the issue.
UCI anti-doping manager Anne Gripper has been in the news a lot recently, not least because of the Michael Rasmussen case at the Tour de France. When challenged by journalists about his missed tests, he told them during a rest-day press conference that he had spoken to Gripper on April 2, 2006 in order to explain the delay in communicating his wheareabouts details. However it emerged that she did not take up her role until several months later. Since beginning with the UCI on October 17 last year, Gripper has been involved with a number of important introductions to the governing body's anti-doping programme. She played an important role in the 100% Against Doping programme launched earlier this year, a project to greatly increase the amount and sophistication of in-and out-of-competition tests. Gripper was also involved in the Rider's Commitment for a New Cycling initiative, whereby riders were asked to sign a pledge that they were not in any way involved with Operación Puerto or any other doping cases, agreed to give a DNA sample if required, and undertook to pay a year's salary if they tested positive or were otherwise implicated in doping. Following the Landis and Operación Puerto cases last season, UCI president Pat McQuaid vowed that the organisation would clamp down and adopt a zero tolerance approach to the problem of doping. While ASO claim that UCI rules should have prevented Rasmussen from starting - a claim McQuaid denies - it can be said that the whole expansion of in- and out-of-competition testing by the UCI and others has greatly increased pressure on riders trying to break the rules. Paradoxically, because these efforts to stamp out doping have led to increased detection, they have in turn generated more negative headlines during this year's race. When asked if this represents a plus or minus for the sport, "Our argument is that it is fine to some people are dejected by the big name doping news.
have a strong anti-doping
have been more optimistic, saying that it can only programme, but is important to deal been seen as a good thing to catch and sanction those who
with the consequences as well."
would take banned substances. So what's Gripper's stance? -Anne Gripper says bad publicity "I guess I am more in favour of the second viewpoint,” she comes with the territory of busting replied. "The announcement of a positive case shows that there is a strong anti-doping programme during the Tour. We are testing for every single possible substance from which detection is available. The strength of the programme is going to give us some consequences and as a sport we are going to have to accept those consequences. We must recognise that those riders who continue to choose to go are being removed from the event and from the sport, and that has to be a good thing. "I really believe that there are far more riders riding this year's Tour fairly and cleanly, and that the anti-doping programme is really helping us to finally weed out those who have chosen to do it in another way," she added. Apart from those being caught for doping, there also seems to have been an effect on the racing during the event. Several big name riders have performed erratically, while the overall pattern of the racing seems a little different. Gripper feels that out of competition testing has increased the pressure on those who wish to use drugs. "We have been watching performances, watching how riders

"The US is a good example where there is a NADA, a national anti-doping agency and it uses an independent hearing body called the triple A, the American Association of Arbitrators, to actually hear its cases," explained Gripper. "That means that USADA can be a clear prosecutor, where as in most national programmes the case is still forwarded to the relevant national federation for whatever sport it is. Then the national federation is expected to prosecute the case against their own athlete. "A similar thing happens with us," she adds. "We send the case out to the Petacchi is delighted national federations and then expect them to conduct the hearing, and if after being cleared necessary prosecute the case against their own riders.” The suggestion is that this system may change in the future due to the obvious problems that can crop up; a rider may have strong links to those within the federation which is charged with punishing him, lessening the chance of objective action. Equally, there is a chance that the national federation could shy away from punishing someone who will be their strongest competitor in Grand Tours, world championships or Olympic Games. It's not always easy - or desirable - for a federation to send a national hero down. The introduction of an independent body such as the AAA would seem to be a step forward in this respect. Moving on to the next level
Another step forward for the anti-doping fight is the establishment of the Movement for a Credible Cycling union. This comprises the French teams Bouygues Telecom, Crédit Agricole, Cofidis, Française des Jeux, Ag2r-Prévoyance and Agritubel, as well as German squads T-Mobile and Gerolsteiner. The initiative came about immediately before the start of the Tour in London when the teams concerned became disillusioned with the lack of intent shown by some other teams vis-à-vis the enforcement of the ethical code, French gendarmes and the general fight against doping. These teams have pledged to show arrive to investigate complete transparency and to introduce additional measures to further a clean In Gripper's eyes, this is a good thing. "I think that those teams have really made a definite stance,” she said. "They want to take the lead amongst the teams themselves in demonstrating both the practical and moral commitment to anti-doping, and to ridding the sport of drugs. They seem to be really looking at all sorts of ways that they as team managers and teams can change the culture of the sport. The more teams that consider this issue really seriously and take ownership of the issue and want to actively do something about it, then the better it is for the overall sport.” The future of two of the teams concerned appears to be under question due to the positive tests of two riders who appear to have been working outside the team environment. Both Patrik Sinkewitz and Christian Moreni failed testosterone examinations and this could potentially lead to an early end in the sponsorship of T-Mobile and Cofidis. If so, it would be a setback for the fight against doping as these two teams have been very forward about the need for change. Indications are that team management in both cases are pushing for a clean sport and so for one or both to stop because of what Sinkewitz and Moreni chose to do would be very unfortunate. "The announcement of that test [Sinkewitz] was the wrong rider, the wrong time, the wrong country and definitely the wrong team," said Gripper, when asked of her thoughts on the uncertainty over T-Mobile's future. "It certainly has been a setback to T-Mobile and the efforts that they have been making. From a team management perspective, it appears that they are still really keen to continue doing what they are doing. "There is an argument that it is one of the teams that is doing a lot more testing, Police and the media is organising the German national body to go and test their riders in training arrive in car loads at camps and out of competition," she notes. "There is always some irony in the fact that the more testing you do, the more likely you are to get positive results. T-Mobile organises a lot more testing, and this makes them more prone to having positive results. Again, it is a bit of a dilemma as to how to respond to that particular result. "I think it is important if T-Mobile decided to stay on as a sponsor," added Gripper. "It would be good for them to continue on the fight against doping that they have been making.”

General notes for translators: (DO NOT TRANSLATE) • The goal is to create a translation that is technically accurate, sounds natural to a native speaker when spoken aloud, and is readily understandable by native speakers in the target language and culture. • These scripts are intended to be read by a native speaker into a camera to produce a video. If your language has a difference betwee