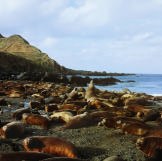 Horizontal Icicles Cling to Wreck:
Bencleugh
Captain J. S.I. Thomson and his brother owned the whaling and sealing schooners, Bencleugh and Friendship. John Thomsonwas aboard the Bencleugh in 1877 when she was shipwrecked onMacquarie Island.
Bencleugh was a schooner of 66 tons, built at Port Chalmers by Sutherland and Co. in 1872, registered at Dunedin in the namesof Andrew and John Sen Inches Thomson and Thomas Black. The topsail schooner, Bencleugh, sailed from Port Chalmers, New Zealandto undertake some sealing and whaling.
They were searching for Emerald Island,which the master of the Emeraldreported as lying south of Macquarie in1821. Captain H.D. Bezer, and CaptainJ.S.I.Thomson, Bencleugh, found no trace of EmeraldIsland and concluded that it had never

The Shipwreck Watch, Vol. 6 ‘The Bencleugh’
The crew spent a long,anxious night listening to the trying to head the Bencleugh back toMacquarie Island through furious gales, the crew did not attempt another landing.
staves of a flour barrel, using the ship’s furniture and fittings for screw nails.
by the rubbing of iron against iron. Then a great white wall of water appeared over The Bencleugh’s chief harpooner, Henry Whalley, was knocked downduring the storm and his leg becamedislocated at the thigh. The whaleboatand davits were washed overboard, andthe schooner filled with water. The mencast off their coats and boots, expectingto have to swim for shore.
whaleboat from the Bencleugh managedto land a store of provisions on unloaded before another serious squallarose. 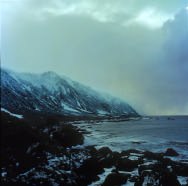 The Shipwreck Watch, Vol. 6 ‘The Bencleugh’
During the shipwreck, twoseemingly supernatural eventsoccurred: A mass of fiery steam erupted from the companion way. At the same time twojibs were run up, as if by invisible hands.
The jibs ‘chattered’, and blew away inrags. Huge lumps of hail pelted the ship.
Most of the crew took refuge in the cabin,whilst a few took to the cabin roof,covering themselves with a spare sail. Achest containing the only supply of drymatches, and other furniture, washedaround the cabin. Waves crashed, timbersstained and floating oil barrels thunderedagainst the bulkheads. The sailors prayedto God for help. But even under theseterrifying circumstances, the crew of the Snow on the coast of Macquarie Island.
Bencleugh found something to make themlaugh. The hatch of the lazarette hadfloated off as the steward was crossing thecabin floor, waist-deep in water. He was smoking a pipe and talking when hedisappeared into the lazarette below. He and barrels were strewn along the beach.
bobbed up again soon afterwards, still talking away, with his pipe still in his washed overboard, there was no otherway ashore but to swim. Captain Bezer called for volunteers to swim ashore with Bencleugh into a natural cleft in a reef.
should be the one to risk such adangerous deed. His first attempt failedand he was swept back towards the through dangerous kelp strands in the icy

The Shipwreck Watch, Vol. 6 ‘The Bencleugh’
found that they had been badly damagedby frost and were inedible.
claimed one hut while the remaining crewcrammed into the other. The bunks werehard boards and they had no bedding, butwere grateful for any sort of shelter. Thenext day the men searched for salvageand were delighted when they found ahalf sack of pearl barley sodden with saltwater. They boiled bucket after bucket Macquarie Island kelp. Photo Isobel Bennett during the night, adding a little ancientliquid sugar they found in a keg in one ofthe huts. They managed to salvage more With the help of the rope, all crew Bencleugh before she broke up.
coats, hats and shoes; two of them hadbroken legs, and several others wereinjured. All of them were wet, cold, Her masts and yards wereawry, and clustered withicicles northward, their wet clothes frozensolid. Eventually they reached twowooden sealers’ huts. These huts were ina poor state, but the men were happy for Artists impression of Henry Whalley by Belinda Kurczok the shelter and soon had a fire going.
They had meagre supplies of soup and In the four months before their rescue, the survivors busied themselves improving the huts.
They made a stove out of a five-gallon oil drum earlier in the whaleboat. In order to make and used a preserved meat tin to construct a lamp coffee they had to melt snow, but the sea that would burn sea elephant oil. For cooking,they used a small trypot and fried scones on a broken old shovel. At night they covered dough salty, although none of them complained.
in wood ashes and had damper in the morning.
During the time they were on the island they

The Shipwreck Watch, Vol. 6 ‘The Bencleugh’
cooked themselves thousands of pancakes madefrom penguin eggs.
sea leopard skins and when their sockswore out they substituted dried grass.
They had plenty of supplies of tobaccoand the castaways used the back teeth ofyoung sea-elephants as pipe bowls andthe quills of albatross feathers as stems.
for anything that washed up. Once theyfound a can of red paint and, since, theyhad few cooking utensils, they tried to The huts where the Bencleugh castaways sheltered.
The Bencleugh crew considered themselves very lucky to find threebottles of lime-juice. That, and a diet of ‘Macquarie Island cabbage’ meant thatthey did not succumb to scurvy.
The cold gave them enormousappetites and they slowlyfattened up on a diet of sea-elephant tongues and steaks, there was little fighting or quarrelingamongst the men. Good fellowship prevailed until the Friendship took them Thomson still wore his tweeds until hisrescue. He found his coat washed up onthe shore and repaired it with twinemade from teasing out threads ofcanvass.
shoes because they had kickedoff their boots in order toswim ashore. The Shipwreck Watch, Vol. 6 ‘The Bencleugh’
References
Thomson, J.S.I. 1912, Voyages and Wanderings in Far Off Lands and Seas, London, 1912, pp139-191.
Further Reading
You can read about the chief harpooner of the Bencleugh, who died and about Thomson’s walk around Macquarie Island in