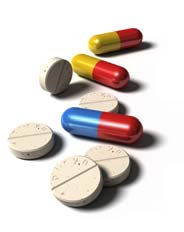 Medicare Part D:
High Prescription Drugs Costs
for Seniors
Iowa’s seniors shouldn’t have to empty
their pockets to buy the drugs they need.
Medicare Part D is Failing Seniors in the Heartland
Iowa’s seniors are paying too much for their prescriptions drugs I. Executive Summary
When establishing the Medicare prescription drug benefit, Congress prohibited Medicare
from negotiating the costs of prescription drugs the way the Department of Veterans
Affairs (VA) does today. To see how this special interest giveaway is impacting Iowa
seniors, Barack Obama compared the Medicare Part D prices of the top 10 selling
prescription drugs to prices at the VA, Canadian pharmacies, and an online drug retailer.
The results are dramatic:
 Iowa seniors on Medicare pay 71 percent more for their drugs than veterans who get
their prescriptions at the VA, and 47 percent more than those who buy drugs at Canadian pharmacies. They even pay slightly more than individuals who buy their drugs at an online retail pharmacy.  The leading osteoporosis drug, Fosamax, is 3.5 times more expensive through Medicare than the VA ($939 versus $269 for a year’s supply).  The leading Alzheimer’s drug, Aricept, costs $862 more for a year’s supply through  Under Medicare, yearly costs for a senior using two of the drugs surveyed would be up to $1,677 higher than in Canada and up to $1,550 higher than at the VA.  If Medicare drug prices fell to those currently paid by the VA the federal government could potentially save $220 to $283 billion over the next ten years. Seniors across the country could save an additional $122 to $157 billion over that period.
Barack Obama has a plan to make these savings a reality. As president, he will empower
Medicare to negotiate with drug companies for lower prices. He will also allow
Americans to buy their medicines from other developed countries if the drugs are safe
and prices are lower, and he will increase the use of generic drugs in public health plans,
including Medicare, while prohibiting large drug companies from keeping generics out of
the market.

II. Background
When the legislation that created the Medicare Part D program was debated in 2003,
Democrats repeatedly called for the government to use its purchasing power to get the
best deal for taxpayers and seniors—just like the VA does today. But the Republicans
who controlled Congress at the time chose to put the interests of the prescription drug
industry ahead of America’s seniors and taxpayers.
Today, the Medicare prescription drug program provides life-sustaining medications to
nearly 24 million seniors, including 317,000 in Iowa. Unfortunately, these seniors—and
the taxpayers who help pay for their Medicare coverage —are paying far too much for
the drugs. Prescription drug companies charge high prices, while Medicare is legally
prevented from negotiating for a better deal. Instead, Medicare Part D contracted
hundreds of different private insurers to provide pharmaceutical benefits. Each insurer
has to negotiate its own prices instead of pooling together to drive down costs for seniors.
In the last decade, the drug and insurance industries spent over $1 billion on lobbying and
campaign contributions, with Republicans receiving the majority of those contributions.
In the lead up to the congressional debate, drug industry backers in Congress not only
banned the government from obtaining low prices under Medicare – they claimed that
forbidding such negotiations would “generate the best savings for seniors”.
Barack Obama decided to test that claim and see if Iowa’s seniors and America’s
taxpayers really were getting the best value for Medicare prescription drugs.
III. Methodology
This report compares the cost of brand name prescription drugs purchased in Iowa using
the Medicare prescription drug benefit (Medicare Part D) to those purchased by the VA,
at Drugstore.com, and in Canadian pharmacies.
The analysis focused on the 10 drugs with the highest dollar sales to seniors in 2005.
Private insurers who sell plans through Medicare Part D negotiate with drug
manufacturers and pharmacies for the prices that will be offered to beneficiaries. These
prices are posted on the Medicare website. The price used for comparison is the full cost
paid by beneficiaries who have not yet reached their deductible or are in the donut hole,
since that is the cost of drugs paid by seniors or passed on to taxpayers in the form of
direct payments to insurers.
1 Kaiser Family Foundation (March 2007), Medicare: A Primer, 2 M. Asif Ismail and Helena Bengtsson (April 2007), “Spending on Lobbying Thrives,” Center for Public Integr; OpenSecrets.org, “Prescription Drugs,” http://www.opensecrets.org/news/drug/index.htm 3 Committee on Ways and Means, Hearing, Negotiating Lower Prices for America’s Seniors (Dec. 11, 2003). 4 Expenditures under Pennsylvania’s PACE (Pharmaceutical Assistance Contract for the Elderly) and PACENET programs were used as proxies for national expenditures. In 2005, the drugs with the highest expenditures were Advair Diskus, Aricept, Fosamax, Lipitor, Nexium, Norvasc, Plavic, Prevacid, Protonix, and Zocor. Pennsylvania Department of Aging, PACE Program, Annual Report to the Pennsylvania General Assembly: January 1 – December 2005, Tables 3.2A and 3.2B (2006), http://www.aging.state.pa.us/aging/lib/aging/2005_Annual_Report.pdf 5 CMS, Find a Medicare Prescription Drug Plan (Feb. 2006), 6 Under the Medicare law, seniors meeting their deductible or in the “donut hole” are supposed to have access to their private insurer’s negotiated drug prices. Public Law 108-173, §1870D-2(d)(1) To determine Medicare drug prices in Iowa, the report examined prices under the five most popular plans in four major cities. The prices were very similar between cities, indicating that they are representative of Medicare prices statewide. The prices offered by the Medicare drug plans were averaged and then compared to three benchmarks: Department of Veterans Affairs (VA) prices. The VA negotiates with suppliers
to obtain low drug prices for veterans.
Drugstore.com, a leading online seller of pharmaceuticals. Prices were obtained
from the Drugstore.com website on June 8, 2007.
Canadian prices. The Canadian government guarantees that citizens are not
overcharged for drugs by establishing maximum prices at which brand name
drugs can be sold. These maximum prices are equal to the average price of the
drug in seven other industrialized countries.

IV. Findings
The report finds that the prices offered by the Medicare drug plans in Iowa are:
 71 percent higher than the prices paid by the VA  47 percent higher than Canadian prices  2 percent higher than the prices at Drugstore.com  6 percent higher than the bulk prices at Drugstore.com 7 The cities are Ames, Davenport, Des Moines, and Cedar Rapids. CMS collects enrollment data by county, so these plans were actually the five most popular plans in the counties containing these cities. In each county, the top five insurers included Humana, Blue Cross Blue Shield Northern Plains Alliance, United Healthcare, and MemberHealth. In Story County (Ames) and Polk County (Des Moines), Silverscript rounded out the top five; in Linn County (Cedar Rapids) it was Unicare; and in Scott County (Davenport) it was WellCare. CMS (May 2007), Monthly PDP Enrollment by State/County/Contract, . 8 Department of Veterans Affairs, FSS, BIG4, VA National Contracts, Tier Prices, and BPAs. http://www.pbm.va.gov/prices/prices2.exe Table 1. Prices for a year’s supply of the ten best-selling drugs
Drug Medicare
VA Canada
Drugstore.com
Drugstore.com
$1,358 $792 $923
The VA had lower prices than Medicare for each of the drugs examined. Even the best deal—Advair Diskus, an asthma inhaler—still cost 40 percent more through Medicare than at the VA. Seniors were overcharged the most for the osteoporosis drug Fosamax, which is 3.5 times more expensive through Medicare than the VA. A year’s supply of Fosamax costs $939 through Medicare but only $269 at the VA. The price difference between the VA and Medicare for a year’s supply of the drugs studied ranged from $249—for Norvasc, which is used to treat high blood pressure—to $862, for Aricept, which is used to treat Alzheimer’s. Seniors using an average drug would have yearly expenses $565 higher in Medicare than the VA. For seniors using two drugs, the typical difference would be about $1,130 and could go as high as $1,550. Table 2. Differences between Medicare and VA prices, one year’s supply
Amount by which Medicare exceeds VA price
Average $565
Some Medicare plans offered slightly better prices than others. The plan with the lowest average price, United HealthCare, was 65 percent more expensive than the VA, compared to 79 percent for the plan with the highest prices, WellCare. The second most popular plan, Humana, also had the second highest prices, 77 percent above the VA. Table 3. Prices by Medicare prescription drug plan, one year’s supply
Humana Blue Cross Silverscript United MemberHealth Wellcare UniCare
Plavix (heart attack or stroke) $998 $1,602 Average $792
$1,370 $1,305
$1,416 $1,366
Canadian prices beat those charged by Medicare plans in Iowa for nine out of 10 drugs. For eight out of 10 drugs, yearly costs were at least $300 higher, and for two of these, they were over $800 higher. For these two drugs—Nexium, which is used to treat stomach acid, and Zocor, which reduces cholesterol—Canadian prices were about half those charged by Medicare. Yearly costs for a senior using a typical drug are $435 more under Medicare in Iowa than in Canada, and for two drugs, the difference could be as high as $1,677. Table 4. Differences between Medicare and Canadian prices, one year’s supply
Amount by which Medicare exceeds Canadian price
Average $435
The report also examined the price of one generic drug, furosemide, used to treat conditions including congestive heart failure. This is one of the most frequently prescribed drugs for seniors. Furosemide costs 10 times more under the Medicare drug program than it costs at the VA, or $51 versus $10 for a year’s supply. Table 5. Prices for furosemide
Medicare plans in Iowa VA Price Drugstore.com (bulk) Drugstore.com

V. Conclusion
The Medicare drug benefit is expected to cost taxpayers $754 billion between 2008 and
2017. Based on the prices in this report, if Medicare drug prices fell to those currently
paid by the VA and federal costs for Medicare Part D fell by a comparable amount, the
federal government would save $220 to 283 billion over the next ten years.
Seniors would also save money on drugs, which they pay for out of their own pocket
before they have met their deductible and while they are in the “donut hole”. If their
spending on drugs declined similarly to that of the federal government, America’s seniors
would save $122 to $157 billion over the next ten years.
Barack Obama has a plan to make these savings a reality. As president, he will repeal the
provision that prevents Medicare from negotiating with drug companies for lower prices.
His plan could lead to even greater savings. He will allow Americans to buy their
medicines through the mail from other developed countries, such as Canada, if the drugs
are safe and prices are lower outside the U.S. And he will work to increase the use of
generic drugs in public health plans, including Medicare, while prohibiting large drug
companies from keeping generics out of the market.
9 CBO (March 2007), Fact Sheet for CBO’s March 2007 Baseline, http://www.cbo.gov/ftpdocs/78xx/doc7861/m_m_schip.pdf 10 Medicare Part D spending that goes to administration and profits would not decline. The remaining spending is assumed to decline by 41.6 percent, the percent by which VA prices are lower than the Medicare prices in this report. The source for administrative costs and profits is Medicare Board of Trustees, 2007 Annual Report, p. 15411 For every $2 spent by the federal government on Medicare Part D, seniors spend approximately $1 on out-of-pocket drugs costs. See Roger Hickey and Jeff Cruz, in cooperation with Dean Baker (April 2007), “Waste and inefficiency in the Bush Medicare prescription drug plan,” Campaign for America’s Future, http://cdncon.vo.llnwd.net/o2/fotf/medicare/National_Savings.pdf. 12 The range of savings for both the federal government and seniors is due to uncertainty about whether and how much a decrease in drug prices would lead to an increase in usage. The high end of the range assumes no increase in usage, whereas the low end assumes a 16 percent increase in usage, based on Dean Baker (January 2006), The Savings from an Efficient Medicare Prescription Drug Plan, Center for Economic and Policy Research,