Monthly Newsletter of National Centre for Disease Control,
Directorate General of Health Services, Government of India
May - July 2009
Vol. 13 : No. 1
SCRUB TYPHUS & OTHER RICKETTSIOSES
it lacks lipopolysaccharide and peptidoglycan RICKETTSIAL DISEASES
and does not have an outer slime layer. It is These are the diseases caused by rickettsiae endowed with a major surface protein (56kDa) which are small, gram negative bacilli adapted and some minor surface protein (110, 80, 46, to obligate intracellular parasitism, and considerable differences in virulence and organisms are primarily parasites of arthropods antigen composition among individual strains such as lice, fleas, ticks and mites, in which they are found in the alimentary canal. In vertebrates, including humans, they infect the vascular endothelium and reticuloendothelial GLOBAL SCENARIO
cells. Commonly known rickettsial disease isScrub Typhus.
Geographic distribution of the disease occurswithin an area of about 13 million km2 including- The family Rickettsiaeceae currently comprises Afghanistan and Pakistan to the west; Russia of three genera – Rickettsia, Orientia and to the north; Korea and Japan to the northeast; Indonesia, Papua New Guinea, and northern of the family, Coxiella burnetii, which causes first observed in Japan where it was found to trench fever have been excluded because the be transmitted by mites. The disease was, former is not primarily arthropod borne and therefore, called tsutsugamushi (from tsutsuga the latter is not an obligate intracellular parasite, being capable of growing in cell-free media, insect or mite). This is found only in areas besides being different in genetic properties.
with a suitable climate, plenty of moisture and Scrub typhus will be dealt in detail.
scrub vegetation. Recently, rickettsioses has SCRUB TYPHUS
been an emerging disease along the ThaiMyanmar border. There are reports of CAUSATIVE AGENT
emergence of scrub typhus in Maldive Islandsand Micronesia.
Scrub typhus (Chigger borne typhus,Tsutsugamushi fever) is caused by Orientia INDIAN SCENARIO
tsutsugamushi. Orientia is a small (0.3 to 0.5by 0.8 to 1.5 µm), gram negative bacterium of In India, scrub typhus has been reported from the family Rickettsiaceae. It differs from the Rajasthan, Jammu & Kashmir and Vellore. In other members in its genetic make up and in addition, few cases have been tested positive the composition of its cell wall structure since for IgM antibodies for scrub typus from Sikkim, Darjeeling, Nagaland & Manipur (unpublished morning, chiggers can be collected from the data). In a study conducted from July through body of the sentinel animals. The mites can be preserved in 70% alcohol till they reach cases of acute febrile illness of unknown origin, laboratory for identification. Chigger index O.tsutsugamushi was identified as causative (average number of chiggers infesting a single agent by microimmunofluorescence and PCR.
host) of > 0.69 (critical value) is an indicator In an entomolgic study in Himachal Pradesh, for implementation of vector control measures.
vector species Leptotombidium deliense andGahrliepia spp. were recorded.
Habitats favorable for disease transmission
Scrub typhus, originally found in scrub jungles, DISEASE TRANSMISSION
Leptotrombidium deliense. The vector mites mountain deserts and equatorial rain forests.
inhabit sharply demarcated areas in the soil Incubation Period
where the microecosystem is favourable (miteislands). Human beings are infected when they trespass into these mite islands and are bittenby the mite larvae (chiggers). The mite feeds CLINICAL PICTURE
on the serum of warm blooded animals onlyonce during its cycle of development, and adult A Papule develops at the site of inoculation.
mites do not feed on man. The microbes are The papule ulcerates and eventually heals transmitted transovarially in mites. Scrub mammals, particularly field mice and rodents.
(>40ºC [104ºF]) with relative bradycardia, The L.deliense group of vector mites are widely distributed all over the country coexisting Approximately one week later, a spotted and hosts, the chiggers attach in clusters on the tragus of the ear, the belly and on the thighs.
the trunk and then on the extremities and The Leptotrombidium mites, on the rat host, may appear orange or pink. The typical vector L.deliense is generally found associated with (30 to 65% of cases), meningoencephalitis secondary vegetation after clearance of forestareas. This species is generally abundant on grasses and herbs where bushes are scarce.
Sentinel animals can also be used for collection of trombiculid mites from the field. These myocarditis, the mortality rate may reach animals are generally white laboratory mice or rats kept in small cages containing food andwater and placed in the field overnight to attract DIAGNOSIS
chiggers. Chiggers can also be collected fromfield directly on human beings, by walking in Routine laboratory tests are unlikely to be the field after wearing stockings. The following diagnostic for any rickettsial diseases. 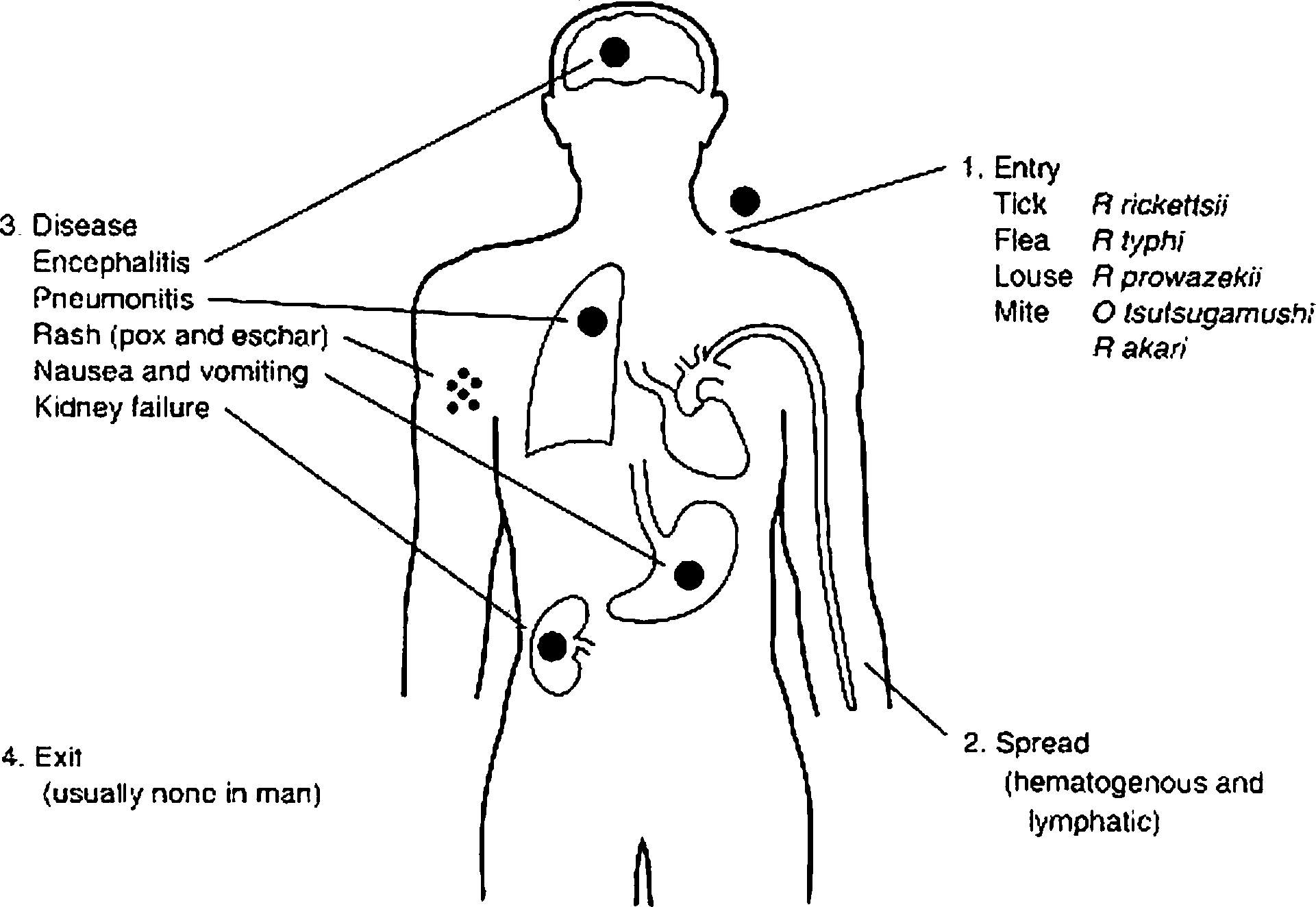 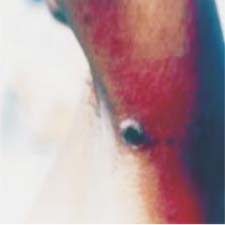 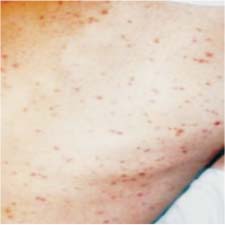 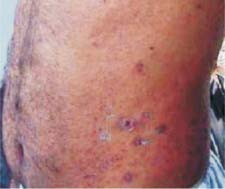 ENDEMIC TY\PHUS
Endemic typhus (Murine typhus) is a milderdisease than epidemic typhus. It is caused byR.typhi which is maintained in nature as a mildinfection of rats, transmitted by the rat flea,Xenopsylla cheopis. The rickettsia multiplies inthe gut of the flea and is shed in its faeces. Theflea is unaffected but remains infectious for therest of its natural span of life. Humans acquirethe disease usually through the bite of infectedfleas, when their saliva or faeces is rubbed in orthrough aerosols of dried faeces. Ingestion of Eschar of tick bite over the left side of the abdomen
food recently contaminated with infected rat urineor flea faeces may also cause infection. Human a case of endemic typhus or with a culture of infection is a dead end. Man to man transmission R.typhi, they develop fever and a characteristic does not occur. In India, endemic typhus has
scrotal inflammation. The scrotum becomes been reported from Pune, Lucknow,
enlarged and the testes cannot be pushed back Mysore, Kolkata, Golkunda, Karnal, Rewari
and Kashmir.
adhesions between the layers of the tunicavaginalis. This is known as the Neil-Mooser or Clinical presentation
the tunica reaction. The Neil-Mooser reaction is SPOTTED FEVER GROUP
They are all transmitted by ticks, except R.akari, headache, fever and rash. This is seen only which is mite borne. Rickettsiae of this group possess a common soluble antigen and multiplyin the nucleus as well as in the cytoplasm of Rash develops in 54% of patients some time host cells. Many species have been recognized Nausea, vomiting, diarrhoea and abdominalpain suggest gastrointestinal diseases while Organism
cough and abnormal chest radiographsuggests pneumonia or bronchitis.
renal insufficiency and respiratory failureare seen in approximately 10% of cases, R.typhi and R.prowazekii are closely similar but may be differentiated by biological andimmunological tests. When male guinea pigs are inoculated intraperiotoneally with blood from The rickettsiae are transmitted transovarially in ticks, which therefore act as both vectors and reservoirs. The infection may be transmitted to vertebrate hosts by any of the larval stages or by adult ticks. Ticks are not harmed by the sanguineus is the most important vector and is rickettsiae and remain infected for life. The generally found infesting dogs all over.
transmission to human beings is primarily by Hyalomma ticks may also transmit the infection.
bite, as the rickettsiae also invade thesalivary glands of the ticks. All rickettsiae of this The incubation period ranges from 2 to 7 days.
group pass through natural cycles in domestic In >50% of the patients, a primary lesion with central necrosis (eschar) appears at the site ofthe tick bite. The lesion is covered with a brownish ROCKY MOUNTAIN SPOTTED FEVER
black scab (tachy noire) and may ulcerate.
Recall of a tick bite cannot always be elicited Rocky Mountain Spotted Fever (RMSF) is the from the patient. Regional lymphandenitis is most serious type of spotted fever and is the common. The fever lasts for 1 to 2 weeks and first to have been described. It is prevalent in many parts of North and South America and is myalgias and a generalized maculopapular rash which develops between the third and fifth days of illness or which may not appear. It disappears TICK TYPHUS (INDIAN TICK TYPHUS)
at the time of defervescence. Alterations incytokine profiles, hypercoagulability and deep Tick typhus, in several parts of Europe, Africa venous thrombosis may occur. In severe cases and Asia is caused by R.conori, strains of which – particularly in elderly patients and those with isolated from the Mediterranean region, Kenya, diabetes mellitus, alcoholism or heart failure – South Africa and India are indistinguishable. The meningoencephalitis with coma and seizures species is named after Conor, who provided the and/or disseminated vasculitis of internal organs first description of the Mediterranean disease.
(e.g. in the heart, lungs, kidneys, liver and Tick typhus was first observed in India in the pancreas) are observed. The mortality rate is 1 foothills of the Himalayas. Subsequently, the to 5% but is higher among patients with severe disease was reported from many parts of the .about CD Alert
CDAlert is a monthly newsletter of the National Centre for Disease Control (NCDC) (formerly known as NICD), Directorate
General of Health Services, to disseminate information on various aspects of communicable diseases to medical fraternity and health administrators. The newsletter may be reproduced, in part or whole, for educational purposes.
Dr. Shiv Lal, Dr. R. L. Ichhpujani, Dr. Shashi Khare, Dr. A. K. Harit Dr. D. Bhattacharya, Dr. Veena Mittal, Dr. Naveen Gupta, Dr. A.C. Dhariwal, Dr. Arti Bahl Director, National Centre for Disease Control, 22 Shamnath Marg, Delhi 110 054 Tel: 011-23971272, 23971060 Fax : 011-23922677 E-mail: [email protected] and [email protected] Website: www.nicd.nic.in Financial assistance by WHO/USAID is duly acknowledged.
Printed at IMAGE, 6, Gandhi Market, New Delhi-110 002, Phones : 23238226, 9811116841