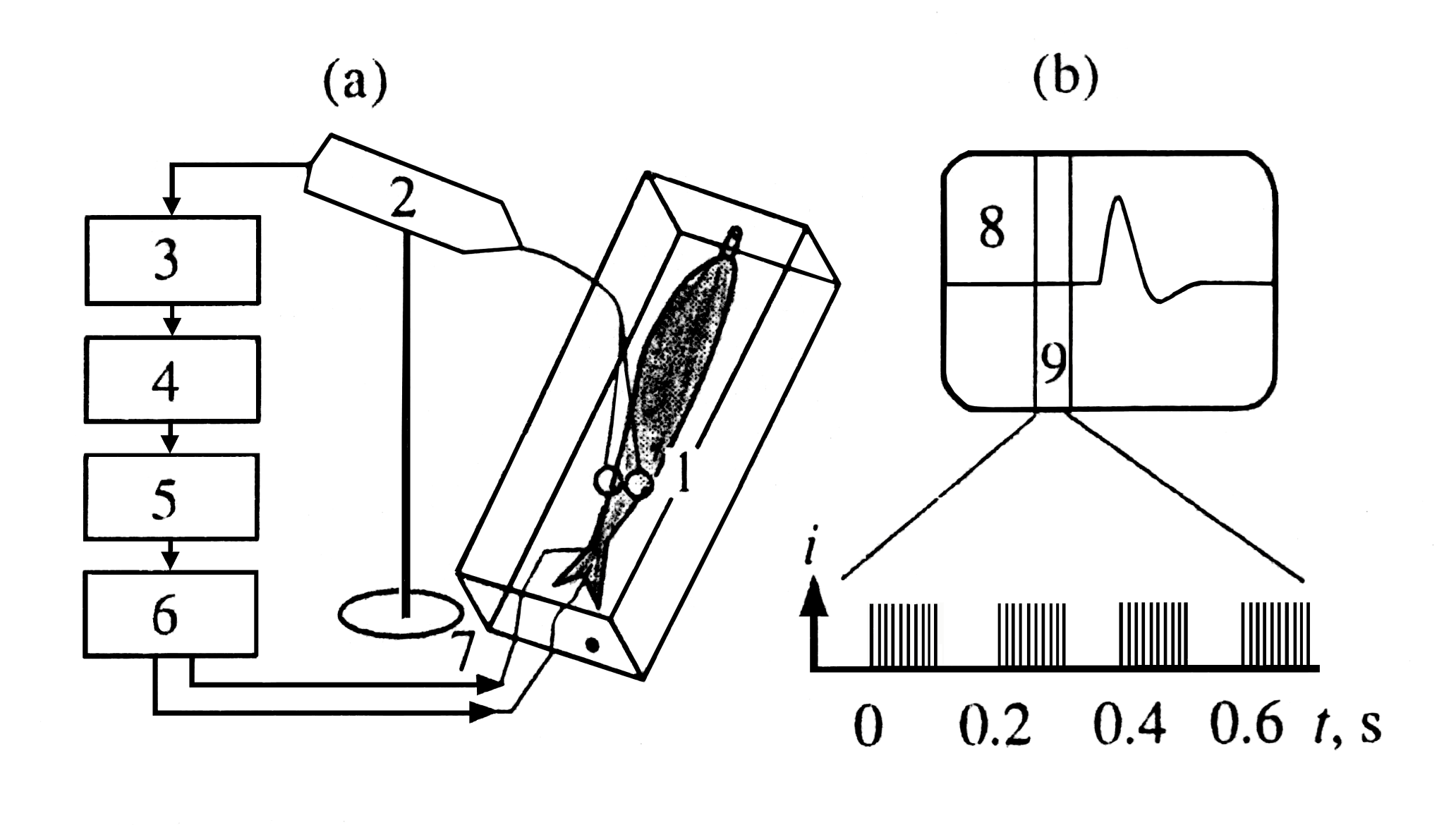 Doklady Biological Sciences. Vol. 375, 2000. pp. 590-591. Translated from Doklady Akademii Nauk. Vol. 375. No. 5, 2000. pp. 703-704.
Original Russian Text Copyright 2000 by Chermva, Lapshin. PHYSIOLOGY
Opioid Modulation of Pain Threshold in Fish
L. S. Chervova and D. N. Lapshin
Presented by Academician P.V. Simonov February 23, 2000 Pain is a signal and defense response developed in total duration, 0.7 s) served as stimuli. The temporal the course of evolution as an adaptation increasing indi- structure of the stimulus is shown in Fig. 1b.
viduals' survival in their environment. Pain sensation Both stimulation and locomotor responses were allows an individual to identify the irritators that may measured by computer. Amplitudes and lag periods of injure its body and threaten its life. In addition to the responses were displayed on a monitor. Our method system of pain sensation (nociceptive), humans and ter- allowed the nociceptive thresholds to be determined at restrial vertebrates have an antipain (antinociceptive) an accuracy of 10%; the measurements were made at 5- morphofunctional system, which controls the threshold min intervals during 1 h before (the background) and of pain sensitivity to sustain it at a functional level. This 1.5-2 h after administration of tramadol. The drug was system consists mostly of endogenous opioid peptidesinteracting with three main types of opioid receptors: µ, injected intramuscularly at closes of 10, 30, 50, 80, and 100 nmol/g body weight in a volume of 1 µl/g. Sodiumchloride (0.9%) served as the solvent and a control We previously showed that, like higher vertebrates, solution. In a special experimental series (six fish), fish also have a system of pain sensation with receptive 100 nmol/g naloxone, which is a universal antagonist areas spread over the entire body surface [2-4]. How- of opioid receptors, was introduced 1 h before the ever, little is known about nociception and antinocicep- experiment. The degree of analgesia (A) was calculated tion in fish, which is mainly due to the lack of adequate as a decimal logarithm of the ratio between the nocice- methods for the quantitative estimation of nociceptive ptive thresholds determined every five minutes after stimuli and the organism's response to them.
tramadol administration and the average threshold We studied the behavioral (locomotor) response of value determined prior to drug administration: A = fish to a threshold level of pain and the effect of trama- lg(Ti/Tf). The results obtained were statistically
dol, a central analgesic, which is an agonist of (µ opioid treated using the Mann-Wilcoxon-Whitney test.
The results obtained indicate that individual nocice- Forty-two carp (Cyprinus carpio) specimens weigh- ptive thresholds in normal fish ranged within 10% ing 50 to 100 g were used in our experiments. Animproved technique, as compared to that used previ-ously [2-4], allowed us to measure the thresholds forpain sensation and changes in this parameter afteradministering the drug. We developed a computerizedopticomechanical system to record fish behavioralresponses, namely, horizontal movements of the caudalpeduncle in response to the stimuli (Fig. 1a).
A fish was fixed (near the mouth and pectoral fins) in a chamber with current water. Electrodes were intro-duced into the tissue of the caudal fin blade, whichexcluded the possibility of the direct stimulation ofmuscle fibers. A series of short-term (0.5 ms) impulsesof current (amplitude, 0.5-2.0 mA; frequency, 300 s-1; Fig. 1. (a) A scheme of an electron opticomechanical system
for the measurement of nociceptive thresholds in fish,
(b) An example of fish response to a painful stimulus as dis-
played on the monitor. Designations: 1, a chamber with cur-
Moscow State University, Vorb'evv gory, Moscow,119899 Russia rent water; 2, sensor; 3, analog-to-digital converter; 4, com- Institute for Information Transmission Problems puter; 5, stimulator; 6, amplifier; 7, electrodes; 8, the monitorscreen; 9, period of irritation (s); i, the amplitude of irritating of the Russian Academy of Sciences, 19 B. Karetnyi 0012-4966/00/1112-059O$25.00 2000 MAIK "Nauka/Interperiodica" 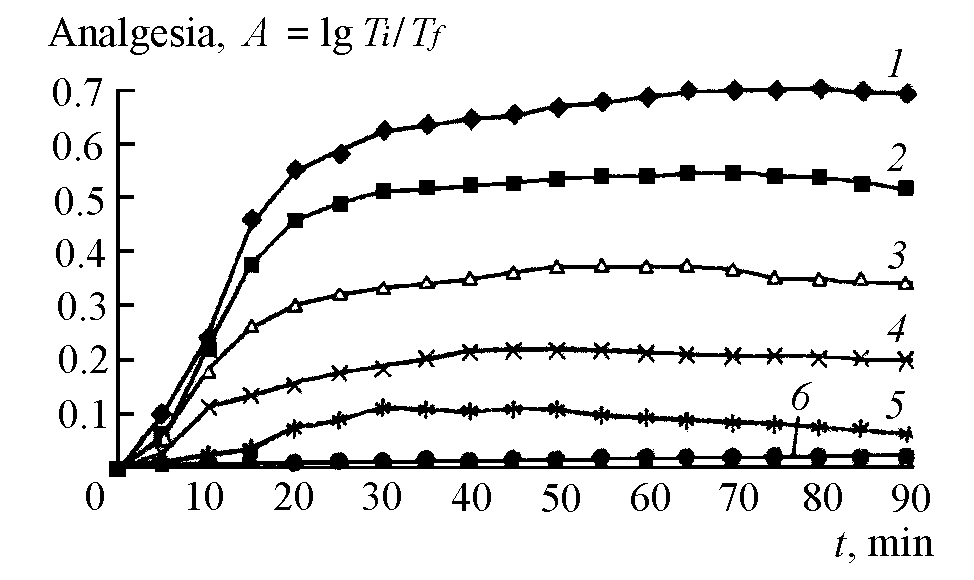 OPI0ID MODULATION OF PAIN THRESHOLD IN FISH to mediate the effects of morphine and its derivatives(analgesia, addiction, etc.) They are also targets forendogenous opioid peptides: enkephalins and endor-phins [1].
Opioid receptors were later found in lower verte- brates. In amphibians, µ, δ, and κ opioids were sug-gested to mediate antinociception via a single type ofopioid receptor, unireceptor [5]. In the bony fishCatostomus commersoni and Danio rerio, cDNA foropiod receptors were isolated to completely clone theµ, δ, and partially clone κ receptors (G proteins). Allfish and mammalian opioid receptors showed a highdegree of amino acid homology [6, 7]. In mammals,the analgesic effects are primarily mediated through µ Fig. 2. Changes in the nociceptive threshold to painful stimuli after
opioid receptors. Our results indicate that, in fish, the the administration of either tramadol solutions (1 - 5: 100, 80, 50, same receptors are responsible for increasing the pain 30, and 10 nmol/g. respectively) or 0.9% NaCI (6: control). All experimental values differ significantly from control values (1-5:p<0.001, <0.001. <0.001. <0.01, and <0.05, respectively). Abscissa Thus, the opioid antinociceptive system seems to shows the time after injection of a solution; ordinate shows the have evolved earlier than was previously believed.
Even in the bony fish, this system shares structural andfunctional similarities with that of modern mammals.
(p < 0.01) and remained stable for 1 - 2 h or even longer.
Five to fifteen minutes after the administration of tram- adol, changes in fish sensitivity to painful stimuli wereobserved. The analgetic effect was dose-dependent; the 1. Dhawan, B.N., Cesselin. F., Raghubir. R., et al, Phar higher the dose, the more quickly it acted (Fig. 2). In macol. Rev., 1996, vol. 48, no. 4, pp. 567-592.
some experiments, the overall time of analgesia was 2. Chervova. L.S., Kamenskii, A.A., Malyukina, G.A., more than 2 h. The lack of response to increasing pain et al., Zh Evot. Biokhim Fiziol., 1992, vol. 28, no. 1, could not be blamed on tramadol immobilizing the fish, because the same fish placed into an aquarium showed 3. Chervova, L.S., Lapshin, D.N., and Kamenskii, A.A., normal swimming and behavior. Tramadol had no anal- Dokl.Akad. Nauk, 1994, vol. 338, no. 6, pp. 836-837.
getic effect if naloxone, an antagonist of opioid recep- 4. Chervova, L.S., Vopr. Ikhtiol, 1997, vol. 37, no. 1, tors, was administered before (p<0.05). After the administration of a control solution, fish showed no 5. Stevens, C.W. and Newman, L.C., Life Sci, 1999, changes in their response to stimuli (p < 0.01).
Our results indicate that, like higher vertebrates, fish 6. Darlison. M.G., Greten, F.R., Harvey, R.J., et al., Proc.
also develop a prolonged analgesia in response to an Natl. Acad. Sci USA, Ser: Neurobiol, 1997, vol. 94, agonist of the opioid µ receptors. Hence, fish have an antinociceptive system consisting of the opioid recep- 7. Barrallo,A., Gonzalez-Sarmiento, R., Porteros, A., et al., tors similar to those in terrestrial vertebrates. The opi- Biochem. Biophys. Res. Commun., 1998, vol. 245, no. 2, oid receptors were first found in mammals and shown