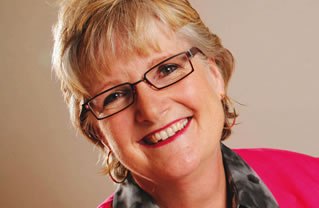 The Making of
Janac Sportswear
Necessity is the mother of invention, as they say. Never did I think I would be inventing products to help women post-breast cancer surgery – until I went through it myself. Here is my story. In 1995 at the age of 43, I found an odd dimpling on the side of my left breast when I was doing a routine self-examination. I went to my GP who said he thought it was nothing, but arranged for me to have a mammogram—just in case. I had the mammogram and an ultrasound and was told there was something unusual. I then went for an appointment with a surgeon who, after a physical examination, told my husband and I that I had breast cancer. To say that we were shocked is an understatement. I had no risk factors, no breast cancer in my family, a non-smoker, social drinker, active and the mother of two sons, who were 20 and 22 at the time. I had a lumpectomy on October 5th 1995 but was told that I would have to have a mastectomy because they couldn’t get clear margins. On November 7th 1995 I had a mastectomy. The cancer that I had was lobular carcinoma and lobular carcinoma in situ. Luckily the lymph nodes were clear, so no chemotherapy. Instead, I started to take Tamoxifen and continued on it for 5 years. Since having the cancer, I have been more physically active and take a more pro-active attitude with regards to my health. In 1998 I was informed that Kathy Levy wanted to form a dragon boat team for breast
cancer survivors called Knot-a-Breast. My friend Anna and I went along to the first
meeting and joined. I am still a member and love the support, interaction with the other
paddlers and the exercise that dragon boating brings.
We soon realized that we couldn’t find a suitable bra top for those of us who had had a mastectomy, so I decided to design one. I had 12 made and asked my team mates to try them. Their feedback indicated that I had the “perfect” sports bra. I started a business called Janac Sportswear and launched the original sports bra “Aggie” and after much success added two new styles; “Dinah” and “Anna”, named after some of my teammates. I also designed a bra-tank to cover the wobbly bits!!! One day while I was exercising and stretching over a Swiss ball, I looked down and
found my prosthesis pointing up to the ceiling and my natural breast lying flat. I fell off
the ball laughing and realized that my gel prosthesis didn’t react like my natural breast
when wearing the sports bra – hence the creation of the Been-A-Boob® Prosthesis. The
Been-A-Boob is a pocket made of a special quick-drying material and filled with
polypropylene pellets which molds into the shape of a breast when put in the pocket of
the sports bra or any mastectomy bra or swimsuit.
When you have been faced with an invasive surgery with disfiguring results, one of the challenges is to be comfortable with your appearance. One of the ways to re-gain your confidence is to feel good in the body you now have. Women can enjoy being active after breast cancer surgery wearing products that are comfortable and supportive. The sportswear that I created is unique because there is no other mastectomy sportsbra on the market that can be worn as a bra top. In November 2007 I appeared on the CBC TV show Dragons’ Den, and was successful in making a deal with 2 of the Dragons. The video clip can be seen on my website, http://www.janacsportswear.ca. During the busy Christmas season of 2008 I suddenly realized that I hadn’t had my annual mammogram in November. I decided that it had been 13 years since my cancer and as I was so busy I would leave it until next year. Well, the next day I couldn’t rest and decided that I had to get the mammogram, it was my security blanket to hear those words “everything is fine”. I had the mammogram on New Years’ Eve, a week later I got called back to have another mammogram and an ultrasound. They had found something unusual. I had an MRI and a core biopsy, and the results were that there were 2 tumors of different cancers. I had another mastectomy on March 5th and am currently having chemotherapy. It will be followed up with radiation, and the drug Arimedex. Although, it wasn’t a good start to the year, I am so glad that I had that mammogram. My messages to all of you is that self-examination is an absolute must because early detection is the key to survival, and also, do not get complacent about your check ups. Annual mammograms and examinations are vital. I know I will survive this new bump in the road of my life and look forward to continuing to enjoy my family, friends, dragonboat team and my successful business. Article sponsored by Janac Sportswear - http://www.janacsportswear.ca

Skin Disorders Insect Bites: A dash of meat tenderizer (papain powder) and a drop of water massaged into the sting site for 5 minutes will quickly relieve the pain. If these ingredients are not available, an ice cube often helps. Antihistamines such as Benadryl or Atarax can help relieve the itching. Soothing lotions such as Calamine lotion can be used. Topical steroid creams are rare