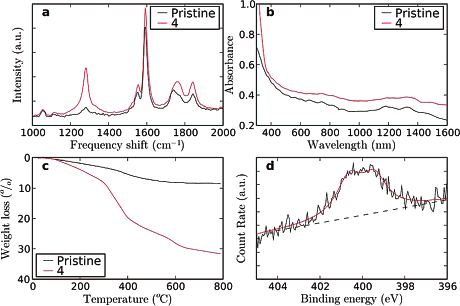 Separation of Semiconducting from Metallic Carbon Nanotubes by Selective
Functionalization with Azomethine Ylides
Ce´cilia Me´nard-Moyon,† Nicolas Izard,‡ Eric Doris,*,† and Charles Mioskowski*,†,§ SerVice de Marquage Mole´culaire et de Chimie Bioorganique, DSV/DBJC, CEA/Saclay, 91191 Gif-sur-YVette Cedex, France, Laboratoire des Colloı¨des, Verres et Nanomate´riaux, UniVersite´ Montpellier II, cc026, Place Euge`ne Bataillon, 34000 Montpellier, France, and Laboratoire de Synthe`se Bioorganique, UMR CNRS 7514, Faculte´ de Pharmacie, 74 route du Rhin, 67401 Illkirch-Graffenstaden Cedex, France Received February 2, 2006; E-mail: [email protected]; [email protected] Since the discovery of carbon nanotubes by Iijima in 1991,1 intensive studies of their mechanical and electronic properties havebeen carried out suggesting great potential for applications innanotechnology.2 However, covalent functionalization of carbonnanotubes is, in some cases, required to optimize their properties.
Few methods have been developed for this purpose and includeaddition of carbenes, nitrenes, or diazonium salts to the nanotubesurface.3 In addition, Prato et al. reported in 2002 an efficientprocedure for the functionalization of single-wall carbon nanotubes(SWNTs).4 Their approach is based on the 1,3-dipolar cycloadditionof azomethine ylides derived from decarboxylation of iminium salts(Scheme 1, path A). Even though the process developed by Pratois robust, it requires strong thermal activation (130 °C) to inducethe formation of the reactive ylide.
In this paper, we report an alternative method for the covalent Figure 1. Normalized Raman spectra at 1064 nm (a), UV-vis-NIR in
functionalization of SWNTs by azomethine ylides. Our approach DMF (b), TGA of pristine nanotubes and of functionalized sample 4 (c),
and XPS of 4 (d).
is based on the generation, under mild conditions, of the 1,3-dipoleby double deprotonation of the corresponding trialkyl-N-oxide5 (Scheme 1, path B). First experiments were conducted at room
temperature. Unfortunately, under these conditions, no covalent
functionalization of the nanotubes was detected. Nevertheless, when
a solution of lithium diisopropylamide (LDA) was added dropwise
to a previously sonicated mixture of SWNTs (HiPco from Carbon
Nanotechnologies, Inc.) and trimethylamine-N-oxide 1 in refluxing
THF (65 °C), we were pleased to observe cycloaddition of the
azomethine ylide to the nanotube surface. To enhance the level of
functional group coverage, the overall sequence was repeated twice.
Characterization of the functionalized SWNTs has been achieved pyrrolidine ring which is formed on the nanotube surface during using different techniques. The Raman spectra of pristine and of cycloaddition. From the nitrogen-to-carbon ratio (4.6%), we functionalized SWNTs 4 are reported in Figure 1a. While the
calculated that the level of grafting is ca. 1 functional group in 18 spectrum of the starting material displays a small disorder mode at carbon atoms, which correlates rather well with TGA.
1290 cm-1, the functionalized sample shows an increase of the so- Hence, the above mentioned process appears to be highly called D-band. This rise indicates that a significant amount of the efficient for the sidewall covalent functionalization of SWNTs.
sp2 carbon atoms have been converted to sp3 hybridization. This However, our initial objective was to design a method which would has been further confirmed by UV-vis-NIR absorption spectro- operate under mild conditions (i.e., at room temperature). We thus scopy. Figure 1b shows the characteristic interband transitions envisioned that if the reactive ylides were generated when in close between van Hove singularities of pristine HiPco nanotubes and contact with the nanotube surface, this would facilitate the the loss of these transitions in the functionalized sample 4. This is
cycloaddition process. Accordingly, we synthesized two different also consistent with the covalent grafting of the nanotubes.
trialkylamine-N-oxides bearing a polycyclic aromatic (PCA) side Thermogravimetric analysis (TGA) of 4 indicates a weight loss of
chain (e.g., pyrene 2 and anthracene 3). Since aromatic derivatives
23% (compared to pristine SWNTs), which was calculated to be are capable of π-stacking to the nanotube surface, the side chain ca. 1 functional group in 16 carbon atoms (Figure 1c). The degree could induce adsorption of the N-oxide precursors on the nanotube.
of coverage has been confirmed by X-ray Photoelectron Spectro- We found that, upon treatment with LDA of a preorganized mixture scopy (XPS). Figure 1d shows the N 1s core level spectrum of 4.
of nanotubes and pyrenyl-N-oxide 2, smooth cycloaddition took
The peak at ca. 400 eV is attributed to the nitrogen atom of the Characterization of the sample unambiguously indicated covalent functionalization of the nanotubes (increase of the Raman D-band § Laboratoire de Synthe`se Bioorganique.
and disappearance of the van Hove singularities in the UV-vis- 6552 9 J. AM. CHEM. SOC. 2006, 128, 6552-6553
10.1021/ja060802f CCC: $33.50 2006 American Chemical Society 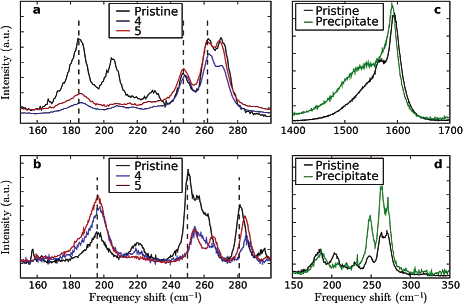 C O M M U N I C A T I O N S
With the mixture of reacted nanotubes 5 in hands, we then set
up a process to separate functionalized sem-SWNTs from unreacted
met-SWNTs. Our strategy is based on the selective solubilization
of the functionalized fraction. This could be achieved by protonation
of the pyrrolidine nitrogen atom of the grafted nanotube by
lignoceric acid (C23H47CO2H). Since the resulting ammonium
carboxylates are bearing long alkyl chains, we assume that sem-
SWNTs would become highly soluble in organic solvents while
met-SWNTs precipitate. In a typical experiment, a sample of
SWNTs that was reacted with ylide 2 (1 mg) is treated with a
solution of lignoceric acid in CHCl3 (5 mg/mL, 3 mL). The mixture
is sonicated for 3 min and left undisturbed for 48 h. The dark
colored chloroform phase is then removed, and the precipitate is
Figure 2. Raman spectra of pristine SWNTs, 4, and 5 in the RBM at 514.5
analyzed by Raman spectroscopy. The tangential mode (1400 < (a) and 647.1 nm (b). Raman spectra at 514.5 nm of pristine and of 1600 cm-1) of the precipitate is broader and more precipitated nanotubes in the TM (c) and RBM (d); intensities were asymmetric than that of pristine SWNTs (Breit-Wigner-Fano line shape, Figure 2c). This indicates a substantial enrichment of theprecipitate in met-SWNTs11 which also concurs with a 4 cm-1 NIR spectrum). TGA of 5 showed a weight loss of 24%, which
was calculated to be ca. 1 functional group in 80 carbon atoms.
downshift of the TM. The Raman data in the radial breathing mode Even though the reaction seems less efficient (to enhance the level region are also consistent with this observation since peaks at ca.
of functionalization, the overall sequence was repeated twice) in 250 cm-1 now appear as major components (Figure 2d). These terms of functional group coverage compared to 4, preorganization
features point out that protonation of functionalized SWNTs (i.e., of the substrate permitted the cycloaddition to be effective at room sem-SWNTs) by lignoceric acid permits the latter to be retained in temperature. Furthermore, it has been recently reported that electron- the chloroform phase, therefore allowing enrichment of the rich compounds, such as porphyrins6 and alkylamines,7 are capable precipitate in unreacted metallic carbon nanotubes.
of selective interactions with semiconducting nanotubes. With these In summary, we report here a mild and efficient method for the results in mind, we further analyzed sample 5 by Raman spectro-
functionalization of SWNTs by cycloaddition of azomethine ylides scopy at two specific wavelengths (i.e., 514.5 and 647.1 nm) to derived from trialkylamine-N-oxides. Selective reaction of semi- determine whether the pyrenyl group permits preferential interaction conducting carbon nanotubes was achieved by preorganizing the with one type of nanotubes. As Raman spectroscopy is a resonant starting N-oxides on the nanotube surface prior to generating the process for SWNTs, allowed optical transitions can be reported on reactive ylide. Separation of met-SWNTs from functionalized sem- a plot as a function of the diameter of the nanotube.8 Also known SWNTs was successfully accomplished by inducing solubilization as Kataura plot, the latter anticipates that both metallic (met- of sem-SWNTs in the presence of lignoceric acid. To the best of SWNTs) and semiconducting (sem-SWNTs) HiPco nanotubes are our knowledge, this is the first process that permits selective simultaneously probed at 514.5 and 647.1 nm.9 Figure 2 displays covalent sidewall functionalization of semiconducting SWNTs.12 the Raman spectra in the radial breathing mode (RBM) range (ν
below 300 cm-1) of pristine and of functionalized samples 4 and
Supporting Information Available: Experimental procedures. This
5. At 514.5 nm, higher frequency RBMs (225-300 cm-1) are
material is available free of charge via the Internet at http://pubs.acs.org.
attributed to metallic nanotubes and lower frequency RBMs (150-225 cm-1) to semiconducting ones. On the contrary, at 647.1 nm,higher RBMs correspond to sem-SWNTs and lower RBMs to met- References
SWNTs. Compared to pristine nanotubes, each peak in the radial (1) Iijima, S. Nature 1991, 354, 56-58.
breathing mode of sample 4 (R ) H) exhibits a systematic upshift
(2) Baughman, R. H.; Zakhidov, A. A.; de Heer, W. A. Science 2002, 297,
of a few cm-1. This upshift is associated with an increase of the (3) Banerjee, S.; Hemraj-Benny, T.; Wong, S. S. AdV. Mater. 2005, 17, 17-
ID/IG ratio (see Figure 1a). This demonstrates successful concomitant functionalization of both met- and sem-SWNTs. The Raman (4) Georgakilas, V.; Kordatos, K.; Prato, M.; Guldi, D. M.; Holzinger, M.; Hirsch, A. J. Am. Chem. Soc. 2002, 124, 760-761.
spectrum of the functionalized sample 5 (R ) -(CH
(5) Beugelmans, R.; Neron, G.; Roussi, G. J. Chem. Soc., Chem. Commun. displays different features. At 514.5 nm (Figure 2a), no upshift is 1983, 1, 31-32.
(6) Li, H.; Zhou, B.; Lin, Y.; Gu, L.; Wang, W.; Fernando, K. A. S.; Kumar, observed for metallic nanotubes (higher RBMs) while an upshift S.; Allard, L. F.; Sun, Y.-P. J. Am. Chem. Soc. 2004, 126, 1014-1015.
is observed for semiconducting ones (lower RBMs). On the other (7) Chattopadhyay, D.; Galeska, I.; Papadimitrakopoulos, F. J. Am. Chem. Soc. 2003, 125, 3370-3375.
hand, at 647.1 nm, lower RBMs are unaffected (met-SWNTs) at (8) Rao, A. M.; Richter, E.; Bandow, S.; Chase, B.; Eklund, P. C.; Williams, the same time as higher RBMs (sem-SWNTs) shift (Figure 2b).
K. A.; Fang, S.; Subbaswamy, K. R.; Menon, M.; Thess, A.; Smalley, R.
E.; Dresselhaus, G.; Dresselhaus, M. S. Science 1997, 275, 187-191.
Taken together, these data suggest that selective functionalization (9) Kataura, H.; Kumazawa, Y.; Maniwa, Y.; Umezu, I.; Suzuki, S.; Ohtsuka, of semiconducting nanotubes can be induced when the starting Y.; Achiba, Y. Synth. Met. 1999, 103, 2555-2558.
N-oxides substrates (ylide precursors) are attached to a polycyclic (10) Aihara, J.; Yamabe, T.; Hosoya, H. Synth. Met. 1994, 64, 309-313.
(11) Dresselhaus, M. S.; Dresselhaus, G.; Jorio, A.; Souza Filho, A. G.; Saito,
aromatic substituent (e.g., 2 and 3). Indeed, the same behavior, albeit
R. Carbon 2002, 40, 2043-2061.
less pronounced, was observed with anthracene-linked N-oxide 3.
(12) Methods for covalent functionalization of metallic SWNTs have already been reported. For example, see: Strano, M. S.; Dyke, C. A.; Usrey, M.
The origin of the selective interaction with sem-SWNTs remains L.; Barone, P. W.; Allen, M. J.; Shan, H.; Kittrell, C.; Hauge, R. H.; unclear. However, we speculate that PCAs could π-stack prefer- Tour, J. M.; Smalley, R. E. Science 2003, 301, 1519-1522.
entially with more aromatic semiconducting nanotubes.10 J. AM. CHEM. SOC. 9 VOL. 128, NO. 20, 2006 6553

Management of PCOS Marja Ojaniemi and Päivi Tapanainen Department of Pediatrics and Adolescence University of Oulu Oulu, Finland The Rotterdam 2004 Consensus Workshop (Revised 2003) proposed that PCOS is a syndrome of ovarian dysfunction, and recommended that two of the following criteria should be present to establish the diagnosis: 1) chronic oligo or anovulation for more than 6 m

by Egbert F. Knol and Jascha I. Leenhouwers, Topigs, PO Box 86, 5268 ZH-Helvoirt, The Netherlands. P iglet mortality is high. On average, Sire line 13% of live born piglets die during lacta-tion. veterinarians, since death can be seen asthe ultimate form of disease. Geneticistsgers on mortality. In this article we willexplain that this fear is not justified. Piglet backfat Ta