International Journal of Pharmacy and Pharmaceutical Sciences, Vol. 1, Issue 2, Oct-Dec. 2009
Research Article
SIMULTANEOUS DETERMINATION OF METFORMIN AND PIOGLITAZONE BY
REVERSED PHASE HPLC IN PHARMACEUTICAL DOSAGE FORMS
K.S. LAKSHMI1, T. RAJESH*1, SHRINIVAS SHARMA2 1Department of Pharmaceutical Analysis, SRM College of Pharmacy, SRM University, Kattankulathur- 603203, Tamil Nadu, India. 2Department of Pharmacology, SRM College of Pharmacy, SRM University, Kattankulathur- 603203, Tamil Nadu, India. Corresponding author e-mail: [email protected] Ph. No-+91-442-745-3160, +91-995-201-4288 Received –8th June, 2009, Revised and Accepted – 4h August 2009
ABSTRACT:
A simple, sensitive and rapid reverse phase high performance liquid chromatographic method was developed for the estimation of Metformin Hcl (MET) and Pioglitazone (PIO) in pure and in pharmaceutical dosage forms. A Gemini C18 column (150x4.6mm, 5µ) was used with a mobile phase containing a mixture of Acetonitrile and Ammonium Acetate buffer (pH-3) in the ratio of 42: 58. The flow rate was 0.3ml/min and effluents were monitored at 255nm and eluted at 5.17min (MET) and 8.1min (PIO). Calibration curve was plotted with a range from 0.5-50 µg/ml for MET and 0.3-30 µg/ml for PIO. The assay was validated for the parameters like accuracy, precision, robustness and system suitability parameters. The proposed method can be useful in the routine analysis for the determination on metformin and pioglitazone in pharmaceutical dosage forms. Key words: Metformin Hcl, Pioglitazone, Reverse phase HPLC, Pharmaceutical dosage forms
INTRODUCTION
Metformin (I, N, N-dimethyldiguanide) and determination of metformin and pioglitazone9-11 Pioglitazone, (±)-5-[p-[2-(5-ethyl-2-pyridyl)- in pharmaceutical dosage forms. The present ethoxy] benzyl]-2,4-thiazolidinedione1 are paper describes a simple, sensitive, validated used in the treatment of type 2 diabetes. and economic method for the determination Metformin improves hepatic and peripheral tissue sensitivity to insulin without the MATERIALS AND METHODS
problem of serious lactic acidosis where as Reagents
Pioglitazone hydrochloride has been shown to Metformin and Pioglitazone were obtained affect abnormal glucose and lipid metabolism associated with insulin resistance by Mumbai, India. Acetonitrile and Methanol enhancing insulin action on peripheral tissues. Many patients suffering from type 2 diabetes require treatment with more than one anti- Instrumentation
hyperglycemic drug to achieve optimal The HPLC system consisted of a Shimadzu The literature reveals that there are some of the methods have been reported for detector. The data acquisition was performed metformin UV1,2, HPLC3 stability studies4 and potentiometry, spectrofluorimetry5. For Chromatographic conditions
pioglitazone HPLC method in pharmaceutical dosage forms6 determination of its metabolites 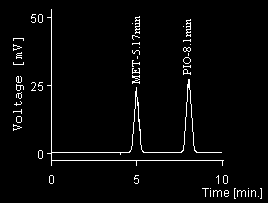 RESULTS AND DISCUSSION
detector. The data acquisition was performed by Spincotech 1.7 software. Analysis was carried out at 255nm using a phenomenex C18 simultaneous determination of metformin and reverse phase column of 150x 4.6 mm i.d., 5 pioglitazone in combined dosage form. The µm dimensions at ambient temperature. The chromatographic conditions were optimized mobile phase consisted of Acetonitrile: by changing the mobile phase composition, pH, and buffers used in the mobile phase. ration of (42: 58, v/v) that was set at a flow optimize the mobile phase. Finally a mixture Preparation of stock and sample of Acetonitrile and Ammonium Acetate
solutions
buffer (pH-3) in the ratio of 42:58 was used. prepared with methanol to give the final using the aforementioned mobile phase from concentration of 1000 µg/ml. The working 20 µL of the assay preparation is illustrated in Fig. 1. The retention times of MET and PIO drug solution from the standard solutions with mobile phase to get concentrations of A mixed standard solution was prepared by transferring 0.2 ml of each from the stock (1000 µg/ml) into 10 ml volumetric flask and made up the volume with mobile phase to get For the analysis of pharmaceutical dosage Fig. 1 : A typical chromatogram showing
the peaks of metformin (5.17 min) and
tablet containing 500 mg of metformin HCl pioglitazone (8.1 min) in pharmaceutical
and 30 mg of pioglitazone was transferred dosage forms
into extraction flask, to this suitable amount The linearity of the method was tested from of methanol was added and the mixture was 0.5- 50 µg/ml for MET and 0.3- 30 µg/ml subjected to vigorous shaking for 30 min for PIO. Linearity solutions were injected in for complete extraction of drugs, and then triplicate and the calibration graphs were centrifuged at 5000 rpm for 20 min (Remi plotted as peak area of the analyte against the concentration of the drug in µg/ml. In the simultaneous determination, the calibration Table 1 : Recovery of MET and PIO (n=3)
Sample ID Concentration of drug (µg/ml) % Recovery
Pure Drug Formulation
MET PIO MET PIO MET PIO
the analytes in the mentioned concentrations experiments. The recovery experiments were and the correlation coefficients for the performed by adding known amounts of the regression line were 0.9968 and 0.9986 for MET and PIO respectively. The accuracy of determined at three levels, viz. 80%, 100%, the method was studied by recovery and 120% of the selected concentrations.
Table 2 : Precision data for MET and PIO
Nominal concentrations (µg/ml) Mean±S.D, %RSD
MET PIO MET PIO
25 1.5 24.67± 0.42, 1.75 1.46± 0.019, 1.30 50 3 48.76± 0.95, 1.95 2.89± 0.051, 1.76 100 6 98.35± 1.89, 1.92 5.86± 0.113, 1.93 Each mean value is the result of triplicate analysis for three times a day Three samples were prepared for each recovery specific for the quantitative determination of level. The recovery values for MET and PIO ranged from 98-102% and 97-103%, validation for different parameters, hence has respectively (Table 1). The precision been applied for the estimation of drug in (repeatability and intermediate precision) of the pharmaceutical dosage forms. Tablets from two different manufacturers (Piocon Forte combined dosage form. Intra and Inter day studies were performed by taking six replicates Chemicals and Pharmaceuticals, and Diavista of three concentrations. The results are shown M MET 500 mg and PIO 15 mg, Dr. Reddy’s in (Table 2). The limit of detection (LOD) and Laboratories) were evaluated for the amount limit of quantitation (LOQ) for MET, PIO was of MET and PIO present in the formulations. 0.003 µg/ml, 0.0061 µg/ml and 0.01 µg/ml, Each sample was analyzed in triplicate after 0.02 µg/ml, respectively. To determine the extracting the drug as mentioned above in robustness of the developed method experimental section. The amount of experimental conditions were purposely altered metformin and pioglitazone was found to be and RSD of the peak areas of MET and PIO within the range of 95%-105%. None of the were found not greater than 2.0 illustrate the tablet excipients were found to interfere with the analyte peak and the results were shown Application of the method to pharmaceutical
dosage forms: The method is sensitive and
Table 3 : Results of the determination of metformin and pioglitazone in Tablets (n=6)
Labeled Amount (µg) Assay
amount (mg) Taken Found±S.D %RSD %w/w
CONCLUSION
The proposed method was found to be simple, precise, accurate and rapid for simultaneous determination of Metformin and Pioglitazone forms. The mobile phase is simple to prepare and economical. The sample recoveries in all formulations were in good agreement with Int. J. App Environ Sci 2008; 3: 65–73. their respective label claims and they 5. Saad SM Hassan, Wagiha H Mahmoud, suggested non-interference of formulation excipients in the estimation. Hence, the Metformin in Pharmaceutical Preparations adopted for routine analysis of Metformin and Pioglitazone in combined dosage forms and UV–Visible Spectrophotometry, Anal REFERENCES
Derivative Spectrophotometric Estimation Tablets, Ind J. Pharm Sci 2005; 67: 256-258. of Pioglitazone and Metformin hydrochloride, Ultraviolet Spectrophotometry, Ind Drugs Suresh B, Ion-Pair Liquid Chromatography Extraction, J. Pharm. Biomed. Anal 1996; Estimation of Pioglitazone hydrochloride Determination of Pioglitazone and 11. Sahoo PK, Sharma R, Chaturvedi SC,