Health and the Environment Journal, 2012, Vol. 3, No. 1 Cyclic Voltammetric Study of Reactive Black 5 Dye
at a Mercury Electrode
Nur Syamimi Z, Mohamad Hadzri Y, Zulkhairi O School Of Health Sciences, Universiti Sains Malaysia, Health Campus, 16150 Kubang Kerian, Kelantan, Malaysia Corresponding author email: [email protected] ______________________________________________________________________________ ABSTRACT: A cyclic voltammetry (CV) study of Reactive Black 5 Dye (RB5) in Britton-
Robinson buffer (BRB) using a hanging mercury drop electrode (HMDE) is described. CV was
carried out by anodic and cathodic potential scan through within the range of + 200 to - 950 mV
with no accumulation time. The effect of the different scan rates and pH of BRB on the peak
height and peak potential of the analyte were also studied. The results show that in pH 2 to 5,
reduction process on the hanging mercury electrode gave three cathodic peaks at + 75 to -151
mV for the first peak, - 98 to - 330 mV for the second peak and – 395 to -630 mV for the third
peak. Only single reduction peak was obtained at -460 to -675 mV in pH 6 to 8 and two reduction
peaks were obtained at - 530 to -640 mV for the first peak and -730 to -840 mV for the second
peak in pH 9 to 12. All potentials were referred against Ag/AgCl as the reference electrode. The
BRB pH 4.0 was noted as the best condition for the detection of RB5 in acidic medium and pH
9.0 in basic medium since both media gave maximum peak current. Effect of the scan rate and pH
of BRB on both responses have proved that the reduction of RB5 is an irreversible reaction, pH
dependent and the limiting current is adsorption controlled. Future work will cover study of
cathodic stripping voltammetry of RB5 at the same type of electrode.

Introduction
In the recent years, growing concern and PeláezCid et al. (2008) dyes are awareness about issues on environment have brought together both analytical and material science researchers to investigate appropriate monitoring various pollutants worldwide. pharmaceutical, printing inks, textile and in waste aqueous effluents can contribute [2, 7-naphthalenedisulfonic acid, 4-amino -5-hydroxy-3,6-bis((4((2(sulfooxy) ethyl) damage (Tonlé et al., 2007). Dyes are sulfonyl) phenyl) azo)-tetrasodium salt] substances which have the affinity to the FIGURE 1, is categorized in vinyl
sulphonate azodye due to the presence of 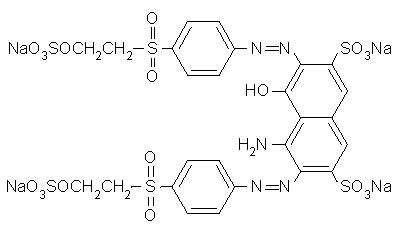 Health and the Environment Journal, 2012, Vol. 3, No. 1 This paper describes the cyclic voltammetric (Tunc et al., 2009). Textile, printing, and mercury dropping electrode (HMDE) as the widely used technique to acquire qualitative information on electrochemical reactions mg/L is toxic to fish, the concentration of considerable information about the kinetic of RB5 above 1000 mg/L leads to inhibition of the system, number of electron transferred, wastewater bacteria activity and it release FIGURE 1: Chemical structure of RB5 dye 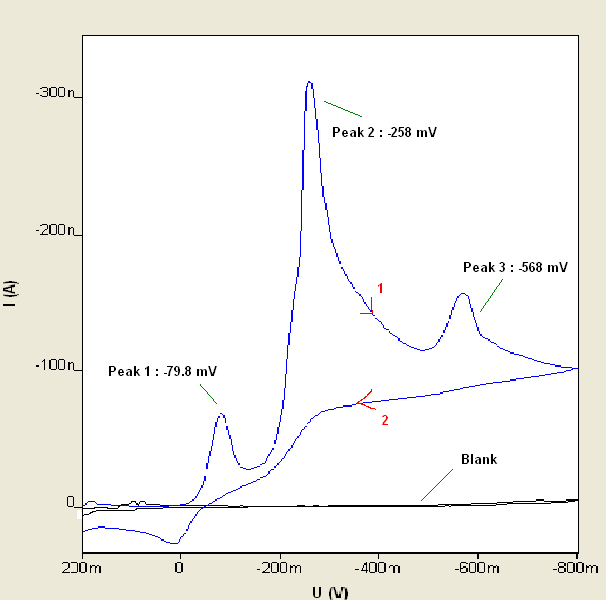 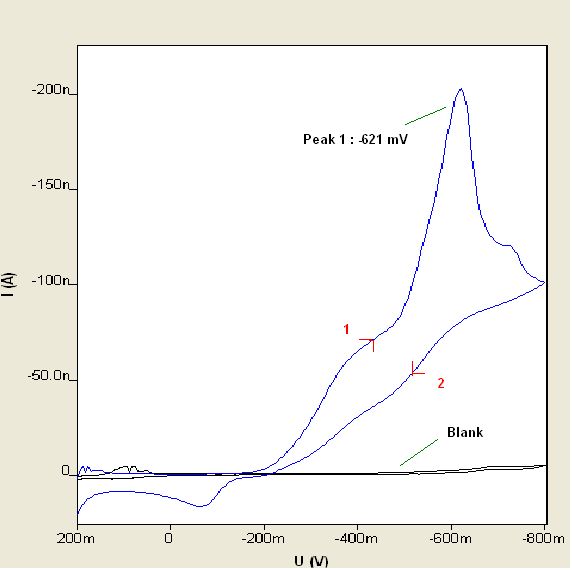 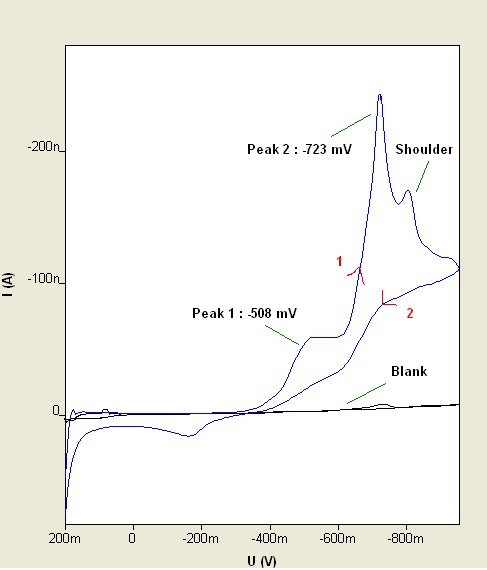 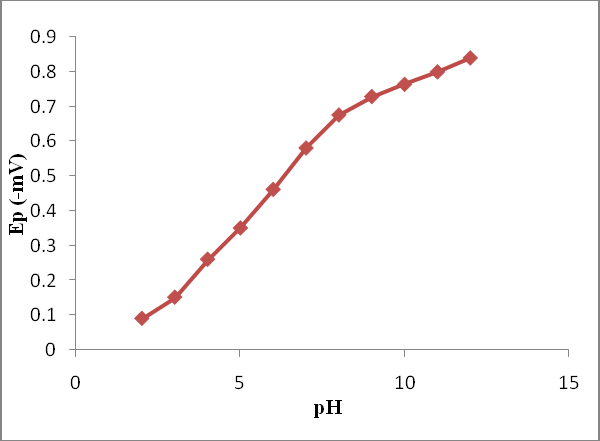 Health and the Environment Journal, 2012, Vol. 3, No. 1 No peak was observed in anodic direction of mechanism for the irreversible reduction of the reverse scans in all pH of BRB solution RB5 dye at the mercury electrode surface is suggesting that the irreversible nature of an electrode process (Gupta et al, 2010; Gupta et al, 2010; Jain et al., 2007). A suggested 2e− + 2H+ + (R–N=N–R1) (R–NH–NH–R1) (1) 2e− + 2H+ + (R–NH–NH–R1) (R–NH2) + (R1–NH2) (2) Equation 1: Suggested mechanism for the irreversible reduction of RB5 dye A mechanism for azo reduction involves two stages as given in reaction (1) and (2) above (Karatas et al., 2009). An unstable colourless The influence of pH of BRB on the cyclic voltammetric behavior of RB5 dye has been reaction (1) and the azo bond can reform studied in the pH range of 2-12 with a scan upon oxidation and regain the colour. R and rate of 25mV/s. The results show that peak potential, (Ep) of RB5 dye shifts to a more play part as terminal electron acceptors are (FIGURE 3) indicating that the reduction
utilized by carriers in the electron transport chain. Hence, they regenerate themselves, process involves the coupling of hydrogen fortuitously reducing azo bond and finally addition, the shifting of Ep is towards a more negative value with increasing H+ in the electrode reduction process (Jain et al., FIGURE 3: Effect of various pH of BRB on Ep of RB5 dye 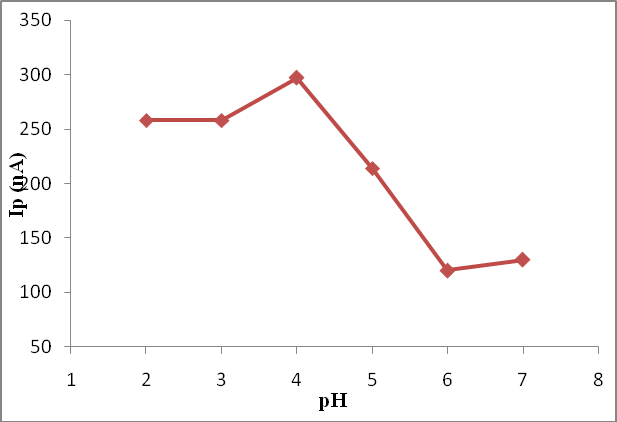 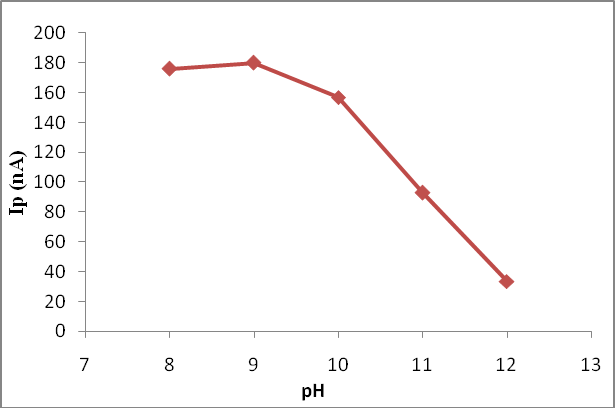 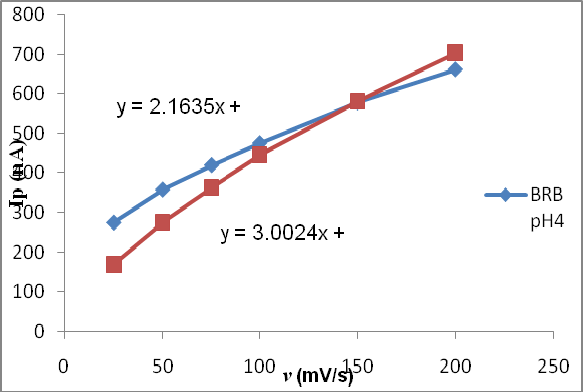 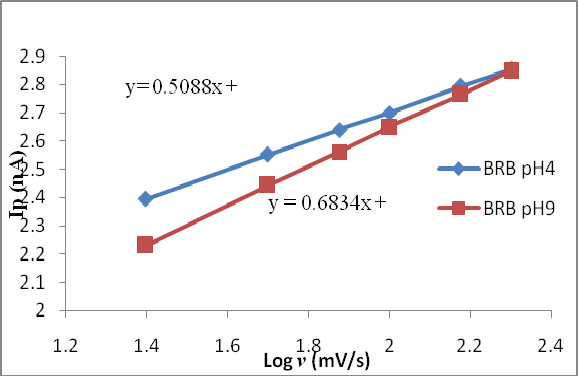 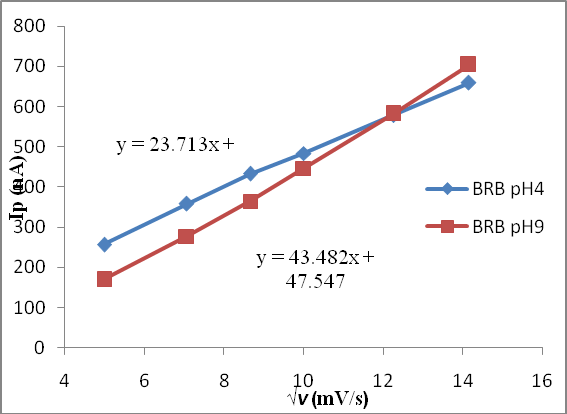 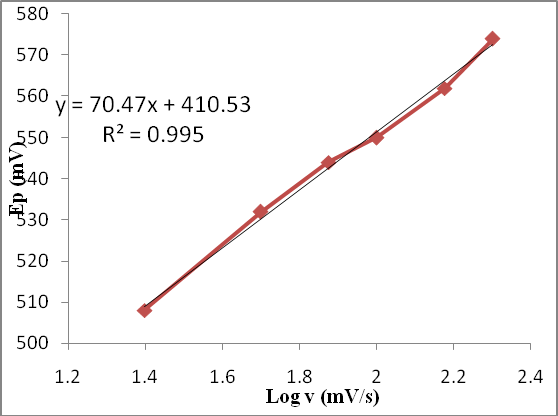 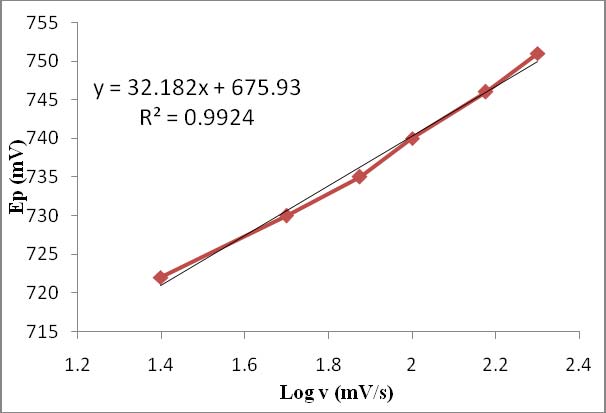 Peptic Ulcer Disease In the end, it is acid that causes the injury to the bowelwall. However, a revolutionary and startling recent Peptic ulcer disease (PUD) is a very common ailment,discovery is that most peptic ulcers result from a stomachaffecting one out of eight persons in the United States. infection caused by the bacteria, Helicobacter pylori. The causes of PUD have gradu