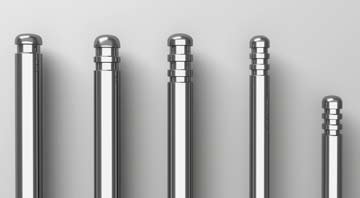 adrenaline.5,6 In the late 1990s, ultrasound was introduced as a means of emulsifying fat prior to the aspiration phase, which decreased the amount of blood in the aspirate.1 First- and Second-Generation Ultrasound Devices Onelio Garcia, Jr, MD, FACSBoard-Certified Plastic Surgeon (Miami, FL) First-generation ultrasound devices utilized solid, blunt-tipped probes (4-6 mm) to deliver continuous ultrasound and fragment fat before evacuation. Second-generation ultrasound devices utilized 5 mm hollow cannulae to allow for simultaneous fat fragmentation and aspiration. However, the inner lumen of Lipoplasty is the most common cosmetic surgical procedure second-generation devices was restricted to a diameter of performed in the United States, yet ultrasound-assisted only 2 mm, limiting the aspiration function. In addition, access lipoplasty (UAL) only represents less than 20% of these incisions of up to 1 cm were required to accommodate the large procedures. Despite the well-documented advantages of UAL, instruments and skin protectors. Inadequate training and a poor concerns about complications remain a significant barrier. While understanding of these devices occasionally led to the excessive earlier iterations of internal ultrasound devices were associated application of ultrasound energy, which in some instances with blood loss, seroma, and burns, among other complications, adversely affected clinical outcomes and increased surgical third-generation devices, such as the VASER Lipo System, complications such as seromas, prolonged dysesthesias, burns, have clearly demonstrated advances in efficiency and safety, induration, contour irregularities, hyperpigmentation, cellulitis, including minimal blood loss and the safe extraction of large and prolonged swelling.5,7 While the complications associated volumes.1 The VASER Lipo System combines VASER technology with first- and second-generation devices are reportedly related refinements in energy delivery and instrumentation with to the excessive energy output associated with these devices improved clinical techniques to minimize tissue matrix trauma or to extended application, improvements made with third- and deliver the desired clinical outcome with maximum safety generation devices obviate these concerns.7 Third-generation UAL devices yield a cleaner aspirate with a higher percentage of supernatant fat.1 The VASER Lipo System: A Third-Generation Modern lipoplasty was introduced in the late 1970s by Dr. Yves-Gerard Illouz and featured the use of a blunt cannula accompanied by high-vacuum suction to promote the fat The VASER Lipo System, a third-generation UAL device, was extraction.3 In the late 1980s, Jeffrey A. Klein described the designed to improve safety and efficiency, reduce complications, tumescent technique, which added both high-volume fluid and and allow for faster patient recovery.5 VASER probes are a local anesthetic. These additions allowed the procedure to be constructed with a proprietary, solid, side-grooved design moved to an outpatient surgery setting with only intravenous that redistributes ultrasonic energy from the tip to the region sedation, rather than general anesthesia, and blood loss was reduced to 8% — 30% of total aspirate.1,4 However, concerns about the high volume of fluid required and the potential toxicity of lidocaine led to the evolution of the lower-volume, super-wet technique. Using a 1:1 ratio of infiltrating solution to estimated aspirate significantly lowered blood loss to a single digit percentage of the total aspirate.1 Some have advocated for increasing the ratio to between 3:1 and 6:1, aiming to achieve significant tissue turgor.5 However, while the appropriate use of wetting solution reduces blood loss and postoperative bruising and enhances patient comfort, overzealous use can result in systemic fluid overload, as evidenced by reported cases of pulmonary edema as well as toxic levels of local anesthetics and

immediately proximal. This results in a 50% lower energy requirement as compared to older systems. The probes are blunt and pass through tissue easily with minimal trauma. Minimizing Several studies have explored the safety and efficacy of ultrasound output provides greater tissue fragmentation while lipoplasty with the VASER Lipo System as compared to traditional decreasing the probability of complications. An array of probe procedures and devices. In 2002, Mark Jewell et al published the diameter and ring combinations are available to accommodate a results of 77 patients who underwent VASER-assisted lipoplasty range of tissue types and treatment locations.8,9 (VAL) by 3 different clinicians. No complications similar to those associated with traditional UAL, including seromas, prolonged The VASER System offers a number of advantages over other dysesthesias, burns, indurations, contour irregularities, hyperpigmentation, or prolonged swelling, were reported. Recovery was uneventful and no patient required revisionary • The VASER solid titanium probes provide more efficient lipoplasty or other secondary body contouring procedures to delivery of ultrasound energy, enabling the use of a smaller improve results. Pain was reported as average, bruising and swelling were minimal, and both patient and surgeon satisfaction were high. The authors also performed a literature search and • VASER probes are available with 1, 2, or 3 groove tips, presented a statistical analysis of complications related to UAL providing greater versatility and precision. VASER probes (Table 1). The authors concluded that VASER technology is a with more grooves allow for greater fragmentation, while safe and efficient body contouring modality and that the shorter VASER probes with fewer rings allow for greater penetration fragmentation time, smaller probe diameters, and reduced ultrasound energy associated with the VASER System minimize collateral tissue damage.5 • The VASER System offers a choice of continuous or pulsating ultrasound energy delivery, allowing the surgeon Garcia et al compared 27 consecutive female patients (ages to tailor the approach according to the extent of fibrosis.9 18.75 years to 54.5 years) receiving suction-assisted lipoplasty Continuous mode is appropriate for general use, for more (SAL) for contouring of the back and posterior flanks with 30 fibrous tissue, and for higher-speed fragmentation. The consecutive female patients (ages 18.5 years to 70.3 years) pulsating VASER mode is appropriate for softer tissue and receiving VAL for the back and posterior flanks. The average applications in which finer sculpting is required, such as body mass index (BMI) for the SAL and VAL groups was 24.2 and 25.6, respectively. This patient cohort represents a larger-sized patient population seeking treatment in an area associated with VASER technology uses roughly half of the ultrasound a higher complication rate and a greater percentage of blood in energy of other platforms to emulsify the same amount of fat, thereby reducing the risk of thermal complications such as fibrosis and seroma.9 The mean hematocrit of aspirate in the SAL arm was 3.98%, • No serious complications have been reported related to compared to 0.61% for the VAL arm. The mean hemoglobin VASER technology in more than 70,000 procedures. content of the aspirate was 7.5 times higher in the SAL arm Table 1. Complication Rates Associated with First-, Second- and Third-Generation UAL Devices1,5 * Based on literature review that included 14 articles and 2,874 patients5† Jewell et al study; includes 77 patients5‡ Garcia et al study; includes 57 patients1

(2.23 g/dL vs 0.30 g/dL). Statistical analysis of the differences 3. Illouz YG. A new technique for localized fat deposit. Paris; in aspirate hematocrit and hemoglobin was determined to be Several studies have explored the safety and efficacy of highly significant (P<.0001). When using bloody aspirate as the lipoplasty with the VASER Lipo System as compared to traditional “endpoint” before removal of the desired amount of aspirate in 4. Klein JA. The tumescent technique for liposuction surgery. procedures and devices. In 2002, Mark Jewell et al published the posterior trunk lipoplasty, an average of 3.1 times more aspirate results of 77 patients who underwent VASER-assisted lipoplasty was removed from the back and posterior flanks with VAL than (VAL) by 3 different clinicians. No complications similar to those with SAL. No VASER-related complications were reported in this 5. Jewell ML, Fodor PB, de Souza Pinto EB, Al Shammari MA. associated with traditional UAL, including seromas, prolonged study. The authors concluded that VAL should be considered Clinical application of VASER-assisted lipoplasty: a pilot case dysesthesias, burns, indurations, contour irregularities, for patients undergoing large-volume lipoplasty procedures or study. Aesthetic Surg J. 2002;22:131-146.
hyperpigmentation, or prolonged swelling, were reported. lipoplasty of tight, fibrous areas such as the back and posterior Recovery was uneventful and no patient required revisionary flanks where increased blood loss is expected.1 6. Illouz YG. Complications of liposuction. Clin Plastic Surg. lipoplasty or other secondary body contouring procedures to improve results. Pain was reported as average, bruising and swelling were minimal, and both patient and surgeon satisfaction 7. De Souza Pinto EB, Abdala PC, Maciel CM, et al. Liposuction were high. The authors also performed a literature search and The VASER Lipo System is a safe and efficient device for and VASER. Clin Plastic Surg. 2006;33:107-115.
presented a statistical analysis of complications related to UAL emulsifying fat, allowing for easier aspiration with a higher (Table 1). The authors concluded that VASER technology is a degree of precision. It significantly reduces surgeon fatigue 8. Sherman MP. VASER lipoplasty. Aesthetic Trends & safe and efficient body contouring modality and that the shorter associated with high-volume extractions and yields a very clean, fragmentation time, smaller probe diameters, and reduced bloodless aspirate even in tight, fibrous anatomical areas. In ultrasound energy associated with the VASER System minimize more than 70,000 procedures with the VASER Lipo System, no 9. DiGiuseppe AD. Ultrasound-assisted lipoplasty for face serious complications have been reported. contouring with VASER. In: Shiffman MA, Giuseppe AD, eds. Liposuction: Principles and Practice. New York, NY: Springer Garcia et al compared 27 consecutive female patients (ages 18.75 years to 54.5 years) receiving suction-assisted lipoplasty (SAL) for contouring of the back and posterior flanks with 30 1. Garcia O, Nathan N. Comparative analysis of blood loss consecutive female patients (ages 18.5 years to 70.3 years) in suction-assisted lipoplasty and third-generation internal Sound Surgical Technologies LLC does not specifically approve, promote, receiving VAL for the back and posterior flanks. The average ultrasound-assisted lipoplasty. Aesthetic Surg J. 2008;28: or accept the opinions, ideas, procedures, protocols, or medications body mass index (BMI) for the SAL and VAL groups was 24.2 and presented in this paper. This material is presented for educational 25.6, respectively. This patient cohort represents a larger-sized purposes only, and is not intended to represent the only, nor necessarily patient population seeking treatment in an area associated with the best, methods, procedures, or protocols appropriate for the medical 2. Cimino WW. VASER-assisted lipoplasty: technology and a higher complication rate and a greater percentage of blood in situations discussed. Rather, it is intended to present an approach, view, technique. In: Shiffman MA, Giuseppe AD, eds. Liposuction: statement, or opinion that may be helpful to others who face similar Principles and Practice. New York, NY: Springer Berlin The mean hematocrit of aspirate in the SAL arm was 3.98%, compared to 0.61% for the VAL arm. The mean hemoglobin content of the aspirate was 7.5 times higher in the SAL arm Dr. Onelio Garcia Jr. began private practice in South Florida in 1985 following completion of his residency training at University Medical Center in Jacksonville, Florida, under the tutelage of Dr. Bernard L. Kaye, a founder and past president of the American Society for Aesthetic Plastic Surgery. Dr. Garcia was president of the Miami Society of Plastic Surgeons in 1997, presided over the Florida Society of Plastic Surgeons in 2005, and is currently a member of the board of directors of that society. Dr. Garcia serves as a Voluntary Assistant Professor in the Division of Plastic Surgery at the University of Miami Miller School of Medicine. He is an active member of numerous plastic surgery societies including the American Society of Plastic Surgeons, American Society for Aesthetic Plastic Surgery, and American College of Surgeons. He is the founder and current president of Aesthetic Plastic Surgery Miami Inc. and a Diplomate of the American Board of Plastic Surgery.
2008 Sound Surgical Technologies LLC.