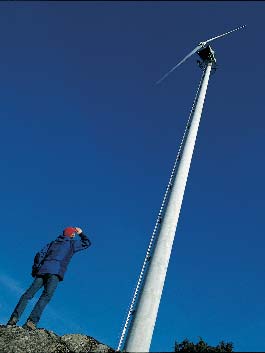 Working with visions of a sustainable society

In the project Göteborg 2050 we developed visions of a future city and region of
Göteborg in a sustainable world. Images of a long-term sustainable future were used
in the project to stimulate an accelerated movement towards sustainability using a
methodology called backcasting. The project Göteborg 2050 included components
of research, scenario development, support for strategic planning, dialogue with
the public, visualisations, and support for demonstration projects.
The project was a co-operative effort between the Chalmers University of Technology and
Göteborg University, the City of Göteborg, and the city’s energy utility (Göteborg Energi
AB). Additional support came from the Swedish National Energy Administration and the
Swedish Research Council for Environment, Agricultural Sciences and Spatial Planning
(Formas), Region Västra Götaland and
Renova.

The project was active in a number of
planning processes in the City of
Göteborg and the Göteborg region,
using the backcasting method (see box
on other page). We supplied visionary
and sustainability-focused input into the
development of a new energy plan for
the city (Solar City Göteborg 2050). We
were also active in the planning
processes for the city's urban planning
and the city's waste management
planning. The project was also supplying
visionary input in a process where the
Göteborg region is evaluating
sustainable transportation futures.
The project also reached into the areas
of building construction, time use,
industrial development, food, and
consumption of goods and services.
Underlying all scenario work in the
project was the understanding that social
sustainability, The Good Life, is just as
important as reaching environmental
sustainability. Another important goal for the project was to have an outreach to the general public. Through exhibitions, meetings, media interaction and information work we reached out to the citizens of Göteborg in order to show positive visions of a sustainable future. The project was also proactive in initiating demonstration projects that show the sustainable world already today.

The sustainable images of the future produced in the project are published as reports with
a summary available for each report. The reports are presently only available in Swedish
but the summaries are available in English. The reports are Solar City Göteborg 2050
(energy), Transportation Göteborg 2050, Urban Structure Göteborg 2050, Eco-cycling
Göteborg 2050 and Food Göteborg 2050.The project work within Göteborg 2050 was
completed in 2004, but the work for a sustainable future will continue in Göteborg and the
surrounding regions.
More information can be found on the project’s web site www.goteborg2050.nu or
contact:
Ann-Marie Ramnerö
Environment Administration
Karl Johansgatan 23-25
SE-414 59 Göteborg, Sweden
Tel: +46 (0) 31 61 26 37 [email protected] Using backcasting to accelerate progress towards sustainability
In the project GÖTEBORG 2050 we used a method known as backcasting in order to use visions of the future as a tool for fostering change towards a more sustainable city and region. The method involves four steps. SUSTAINABIL ITY
Images of the Future
1. Analyse the present situation
Alternativ e
2. Examine and decide upon criteria
scenarios
for sustainability
”Sustainabl e”
Description of Present State
rend analysis
3. Create alternative scenarios
”Not susta inabl e”
Processes for change
Strategy work
Planning
Action plans
4. Use the scenarios to promote

It is our conviction, after working with this method for some time, that it is possible to use visions and
images of the future to accelerate the rate of sustainable development.

Interview with Carlos Catan Antonio e Yasmin, owners of Hotel Canto das Águas, in Lençóis, Bahia (Chapada Diamantina), the first hotel in Brazil to obtain ABNT NBR 15.401 ( Accomodation – Sustainable Management System – Requirements) certification (May 2009). 1) Could you tell us a little bit about the Cato das Águas story? According to the 4 Rodas Brazil Guide, the hotel da