Overexpression of the hereditary hemochromatosis protein, HFE, in HeLa cells induces an iron-de¢cient phenotype Barbara Corsia, Sonia Levia, Anna Cozzia, Angelo Cortia, Domenico Altimarea, aDibit, Department of Biological and Technological Research, IRCCS H. San Ra¡aele, Via Olgettina 58, 20132 Milan, Italy bDepartment of Biomedical Technologies, University of Brescia, Brescia, Italy Abstract A transfectant HeLa cell clone expressing HFE under crypt cells of the small intestine [12] and in Kup¡er cells, in the control of a tetracycline-repressible promoter was generated.
liver and brain sinusoidal cells, and in scattered epithelial cells HFE expression was fully repressed by the presence of in the crypts of the small and large intestine [13].
doxycycline, while it was strongly induced by growth in the HFE associates with the transferrin receptor (TfR) more absence of doxycycline. HFE accumulation was accompanied by tightly at neutral (pH 7.5) than at acidic pH (pH 6) and the a large (V10-fold) decrease in H- and L-ferritin levels, by a binding reduces TfR a¤nity for Fe-transferrin [14,15]. In V3^4-fold increase in transferrin receptor, and a V2-fold transfected cells an association between HFE and TfR occurs increase in iron regulatory protein activity. These indices of in the endoplasmic reticulum/cis-Golgi compartment soon cellular iron deficiency were reversed by iron supplementation after synthesis, it stabilizes HFE protein from degradation complexes. The overexpressed HFE immunoprecipitated to- [16], and reduces cellular iron uptake [17,18]. HeLa cell clones gether with transferrin receptor, indicating a physical association which is the likely cause for the observed V30% decrease in overexpressing HFE showed low levels of endogenous ferritins 55Fe-transferrin incorporation after 18 h incubation. In the HFE- and a reduced capacity to incorporate 55Fe-transferrin, while expressing cells the reduction in transferrin-mediated iron they took up 55Fe-NTA at the same rate as control clones incorporation was partially compensated by a V30% increase [17]. The pH-dependent association with TfR appears a major in non-transferrin iron incorporation from 55Fe-NTA, evident and important linkage of HFE with cellular iron metabolism, after prolonged, 18 h, incubations. The findings indicate that but its physiological role in the regulation of body iron ab- HFE binding to transferrin receptor reduces cellular iron sorption and tissue distribution is unclear.
availability and regulates the balance between transferrin- We describe the production of a HeLa cell clone expressing mediated and non-transferrin-mediated cellular iron incorpora- HFE under the control of a tetracycline-inducible promoter.
Analysis of the clone showed that HFE overexpression is z 1999 Federation of European Biochemical Societies.
accompanied by a large (V10-fold) decrease of H- and Key words: Hemochromatosis; Iron metabolism; L-ferritin accumulation, by a V3^4-fold increase in TfR pro- Recombinant protein; HFE protein; Transferrin receptor tein and by a strong activation of iron responsive element (IRE) binding activity of the iron regulatory proteins (IRPs) which are the typical indices of cellular iron de¢ciency. The cells have a reduced capacity to incorporate 55Fe-transferrin, while they have an increased capacity to accumulate non- Hereditary hemochromatosis (HHC) is a common autoso- mal recessive disorder characterized by an upregulated iron absorption [1]. The hemochromatosis gene encodes the HFE protein (formerly HLA-H) resembling major histocompatibil- 2.1. DNA, expression and puri¢cation of HFE protein ity complex class I molecules [2]. The HFE Cys282CTyr Full length human HFE cDNA was generated by RT-PCR from mutation, which is homozygous in s 70% of HHC patients mRNA extracted from human pulmonary cells. The cDNA was sub- cloned into pCDNA3.1 vector (Invitrogen) and pUDH10-3 vector [3^5], results in the loss of a structural disul¢de bond, prevents (Clontech) fused to the myc-tag peptide at the C-terminus. The association with L2-microglobulin (L2m) and proper presenta- cDNA sequence encoding HFE ectodomains (residues 26^304) was tion to cell surfaces [6,7]. Mice deleted for the HFE or the subcloned into vector pET12b for expression in Escherichia coli, fused L2m gene show a fast accumulation of iron in the parenchyma to a polyhistidine tag. DNA sequencing con¢rmed that the plasmids encoded the correct protein sequence reported in [2]. Transformation cells of liver similar to that observed in HHC [8,9]. The arti- of E. coli strain BL21(DE3)pLysS and protein expression were per- ¢cially induced C282Y mutation in mice produces an HHC- formed essentially as described [19]. HFE was puri¢ed by a¤nity like phenotype less severe than that of HFE null mice [10].
chromatography on Ni-NTA Sepharose, and protein puri¢cation HFE mRNA is expressed in various tissues with the highest was con¢rmed by SDS-PAGE and Coomassie blue staining. Protein levels in liver and intestine [2], and immunohistochemical concentration was determined with the BCA assay (Pierce) calibrated HFE was found in the syncytiotrophoblasts of human placen- ta [11], in the epithelial cells of the alimentary tract, in the 2.2. Antibodies, metabolic labeling and SDS-PAGE Mouse anti-HFE antibodies were elicited by the puri¢ed and dena- tured recombinant HFE protein from E. coli. Antibody speci¢city was assessed by Western blotting and immunoprecipitation. To increase *Corresponding author. Fax: (39) (2) 2643-4844.
antibody production we induced antibody-containing ascitic £uid in some mice by intraperitoneal injection of pristane [20]. Anti-myc-tag 0014-5793 / 99 / $20.00 ß 1999 Federation of European Biochemical Societies. All rights reserved.
PII: S 0 0 1 4 - 5 7 9 3 ( 9 9 ) 0 1 3 3 0 - 7 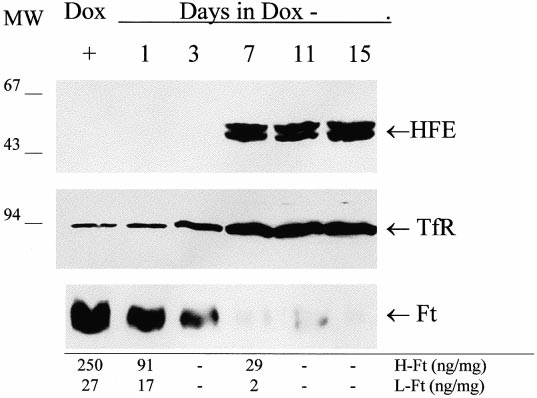 B. Corsi et al./FEBS Letters 460 (1999) 149^152 antibody 9E10 was purchased from Sigma and anti-transferrin recep- tor antibody from Zimed, anti-ferritin H- and L-chain monoclonal antibodies and ELISA assays for H- and L-ferritins calibrated with recombinant H- and L-ferritin homopolymers are described in [21].
Metabolic labeling with [35S]methionine, immunoprecipitations, SDS- PAGE and £uorography were performed as described in [19]. Immu- nocytochemistry was performed on ¢xed cells permeabilized with 0.5% Triton X-100 using anti-myc-tag antibody (2 Wg/ml) followed by TRITC anti-mouse IgG rabbit antibodies (Dako) and the stain visualized by £uorescence microscopy.
HeLa-Tet-O¡ cells (Clontech) were co-transfected with plasmid pUDH10-3-HFE and with plasmid pTK-Hyg (Clontech) using the calcium phosphate method [19]. The colonies selected with hygro- mycin D (150 Wg/ml) and doxycycline (2 Wg/ml) were screened for the HFE gene by PCR and for HFE expression by immunoprecipita- tion of metabolically labeled cells with anti-myc antibody 9E10. The Fig. 1. Time course of HFE expression in HeLa transfected cells.
selected cells were maintained in Dulbecco's modi¢ed Eagle's medium Soluble lysates (30 Wg) of transfected cells grown in 2 Wg/ml doxycy- (DMEM, Gibco) supplemented with 10% fetal bovine serum (Clon- cline (+) or in the absence of doxycycline for the indicated days tech), 100 Wg/ml G418 (Geneticin, Sigma), 150 Wg/ml hygromycin D were subjected to SDS-PAGE, transferred to nitrocellulose and de- (Clontech) 100 U/ml penicillin, 100 Wg/ml streptomycin, 1 mM L-glu- tected with mouse anti-HFE antibody (1:4000), anti-transferrin re- tamine and with (Dox+) or without (Dox3) 2 Wg/ml doxycycline ceptor antibody (1:1000) or anti-H-ferritin monoclonal antibody rHO2 (7 Wg/ml) and the appropriate peroxidase-labeled secondary antibody (1:100). HFE and TfR were separated on 12% polyacryl- amide gels under reducing conditions, while ferritins were separated Subcon£uent HFE-HeLa-Tet-O¡ cells were lysed and 30 Wg of on 7.5% polyacrylamide gels under non-denaturing conditions. The soluble protein loaded on SDS-PAGE. For HFE and TfR analysis, mobility of the 45^47 kDa bands of HFE, of the V94 kDa band the samples were denatured by heating at 100³C for 10 min in the of TfR and of the ferritin bands is indicated by arrows. The ELI- presence of 2% 2-mercaptoethanol, and run in 12% polyacrylamide SA-derived cellular concentrations of H- and L-ferritins on the indi- gels. For ferritin analysis, the samples were not heated to avoid pro- cated days of induction are shown at the bottom. MW: molecular tein disassembly and loaded on 7.5% polyacrylamide gels. After trans- weight standards. Representative data from two independent experi- fer, the nitrocellulose ¢lters were incubated with anti-HFE antibody (dilution 1:4000), with anti-TfR antibody (dilution 1:1000), or with anti-H ferritin rHO2 monoclonal antibody (concentration 7 Wg/ml) followed by secondary, peroxidase-labeled antibody (Envision, Dako). Bound activity was revealed by ECL (Amersham).
obtained with the same antibody when the clone was main- tained in the presence of 2 Wg/ml doxycycline (Dox+) (not Bandshift experiments for IRP activity were performed as in [22].
shown). Immunocytochemistry staining with the anti-myc Cells (2U105) subjected to various treatments were lysed and 2 Wg samples of soluble protein were incubated with a molar excess of 32P- antibody produced a strong, mainly intracellular decoration labeled H-ferritin IRE probe, RNase T1 and heparin in the presence in the Dox3 transfected cells and no signi¢cant background or absence of 2% 2-mercaptoethanol [22]. RNA protein complexes in Dox+ cells (not shown). These ¢ndings indicated that the were separated on 6% non-denaturing PAGE and exposed to auto- HeLa clone (HFE-HeLa-Tet) expresses a myc-tagged HFE functional in binding TfR and that the expression is fully re- Cells (2U105) were grown for various lengths of time in the pres- The time course of HFE accumulation after doxycycline ence of 2 WCi/ml of 55Fe-NTA (0.4 WM Fe(III), 4 WM NTA) in removal was analyzed by Western blotting. We used mouse DMEM, 0.5% fetal calf serum, 0.5% bovine serum albumin, 150 WM antisera elicited by the denatured recombinant HFE produced ascorbate. The cells were washed and lysed in 0.3 ml lysis bu¡er (20 mM Tris-HCl pH 8.0, 200 mM LiCl, 1 mM EDTA, 0.5% in E. coli, which is speci¢c for HFE in immunoblotting and NP40), centrifuged and 10 Wl samples of the soluble fraction were does not cross-react with HLA molecules (not shown). The mixed with 0.5 ml of Ultima Gold (Packard) and counted for 3 min antibody did not detect HFE in the homogenate of Dox3 in a scintillator counter (Packard). In other experiments the cells were cells at days 1^3 and recognized the 45^47 kDa HFE doublet incubated with 0.5 WM 55Fe-transferrin for 18 h in serum-free me- from day 7 on (Fig. 1). From densitometry of the blots in dium, and treated and counted as above.
comparison with those of known amounts of recombinant HFE from E. coli we estimated an HFE level of about 500 ng/mg of total soluble proteins which remained constant from day 7 to 15. Staining of the blots with an anti-TfR To study the e¡ect of HFE expression on cellular iron me- antibody which recognizes denatured TfR from SDS-PAGE tabolism we generated stable HeLa transfectants with the [17] revealed the expected V94 kDa band in all cell homoge- HFE gene under the control of a tetracycline-responsive pro- nates with an intensity that increased with the time of growth moter. The screening for HFE expression was based on im- in Dox3 to about 3^4-fold over Dox+ at day 7 (Fig. 1). An munoprecipitation of [35S]methionine-labeled cells with the anti-H-ferritin monoclonal antibody was used to stain blot- 9E10 antibody speci¢c for the myc-tag peptide attached at tings from non-denaturing PAGE and it detected the typical the C-terminus of the protein. From a clone grown in the slow moving band of assembled ferritin (V500 kDa) the in- absence of doxycycline (Dox3) we immunoprecipitated a tensity of which steadily declined in the Dox3 cells to become double band of 45^47 kDa attributed to the glycosylated virtually undetectable from day 7 on (Fig. 1). For quantitative and unglycosylated form of HFE, and a band of V94 kDa data, the H- and L-ferritin concentrations were evaluated with corresponding to TfR. No detectable immunoprecipitate was ELISA assays based on speci¢c monoclonal antibodies and 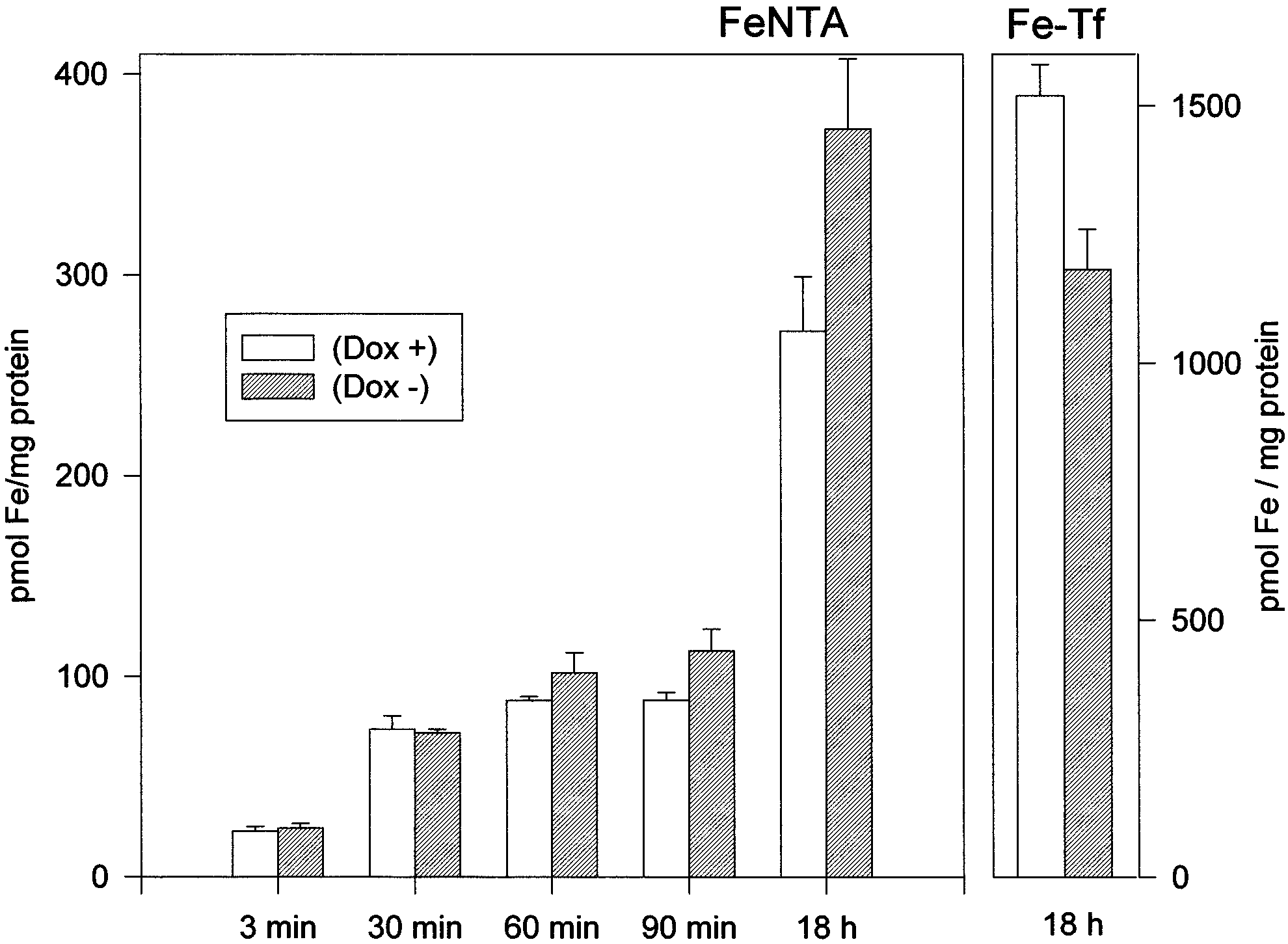