Miss Elizabeth Goad, Mr. Justin Tummins, Mr. Daniel Lewis, Mr. Tyler Lewis, Miss Amanda Hayes,
and Mr. Chase Vaughan have all recently accomplished a great achievement by receiving their First
Degree Black Belt and Certificate presented by Tony Lewis, owner and chief instructor of Dickson
Taekwondo (608 Henslee Drive).
615-446-5622 www.dicksontaekwondo.com
Miss Elizabeth Goad said that Taekwondo has not only helped her with anger management, but also
with managing her weight and making new friends! Her Taekwondo goal is to go as far as she can. As a
life goal she would like to publish her own book by the age of 40.
Mr. Justin Tummins stated that Taekwondo is a great program. It has helped him in many ways such as
building his self-confidence, giving him a better attitude, and having more self-control. Justin loves to
compete! Although he has many trophies and medals, he says it is not about winning, it is about getting
experience, meeting new people, and having fun!
Mr. Daniel Lewis mentioned that Taekwondo has sharpened his skills, confidence, and focus. His goal in
Taekwondo is to become an instructor. He hopes one day to become a lawyer or something else within
the Government. Mr. Lewis is also a member of our Black Belt Club at Dickson Taekwondo.
Mr. Tyler Lewis has better focus and has learned more self-defense thanks to Taekwondo. His
Taekwondo goals are to be a National Champion and do the best he can. In life he wants to go where his
life leads him. Mr. Lewis is also in our Black Belt Club.
Miss Amanda Hayes says that Taekwondo has given her exercise and it is very challenging. She has also
made new friends that if she hadn’t have started taking Taekwondo she would have never met. Her
future goals in Taekwondo are to one day earn her assistant instructor collar, and maybe one day
become a second degree black belt. She hopes to graduate from high school and go to college at David
Lipscomb and become a Pharmacist.
Mr. Chase Vaughan said that Taekwondo has made him the person he is today. It has developed and
taught him focus and concentration in order to achieve his goals. The real reason he began Taekwondo
was to improve his self-defense skills so that he could protect himself as well as his family. Taekwondo
has improved his reflexes and strength to do the activities he loves such as skate-boarding and playing
football. Another reason he is in Taekwondo is to get regular work-outs in stretching, strengthening,
and endurance. Mr. Vaughan wants to be a master Black Belt, he also wants to teach his little sister the
art of self-defense and train her to be a great person using the tenants of Taekwondo and the discipline
to make her the best person she can be. He has a feeling she is going to be a great Black Belt because he
plans to set a good example for her expressing all he has and will learn. Another Taekwondo goal of his
is to improve his sparring skills to make him stronger and a better fighter. Mr. Vaughan hopes to
graduate High School and attend college. He wants to study and become an automotive technician and
work on high performance vehicles. The college he is leaning towards right now is Nashville Auto Diesel
College to earn a degree as a mechanic. As a hobby, or possibly a second career, he would like to be a
pro skate boarder.
Mr. Phillip Baucom, a student at Dickson Taekwondo (608 Henslee Drive) accomplished one of his goals
recently by receiving his Choong Sil Taekwondo Second Degree Black Belt, presented by Mr. Tony
Lewis-owner and chief instructor, and has set a goal to become a Taekwondo Instructor. Taekwondo
has taught Mr. Baucom self-respect, respect for others, how to use self-defense, and not to give up and
to keep trying no matter what life throws at him. After he graduates High School Mr. Baucom is
planning on attending college. 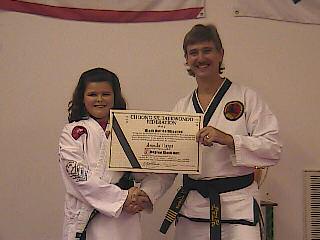 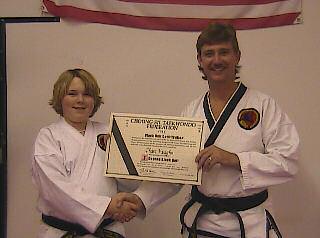 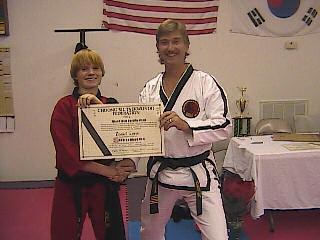 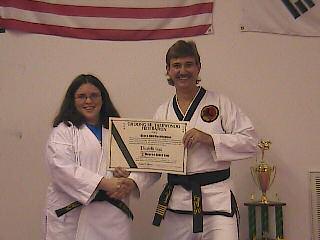 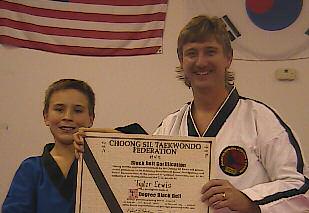 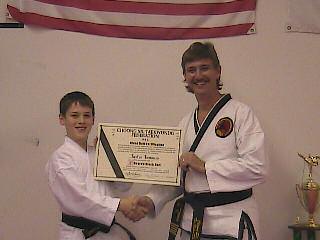 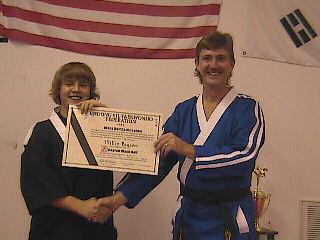