by Brian Clark Howard
In the brightly colored basement of an old fraternity house in Bloomington,
Indiana, an eclectic group of customers gather daily over coffee. Proudly
home to kitschy 1970s furniture and vintage wall hangings depicting Neil
Armstrong, JFK and dogs playing poker, the independent coffeehouse Soma
serves up lattes, mochas, macchiatos and regular cups of joe. “In the
morning, we normally have a crowd of middle-aged professionals who hang
out here and get coffee before they head to work, and in the afternoon groups
of punk rock kids come here on their bikes,” says Abe Morris, a former
manager of Soma who has recently cut back on his hours to make time for
graduate school. “On weekends, a retired couple often drops by to meet with
their grown-up kids, and they all have family time,” he says. 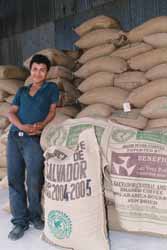 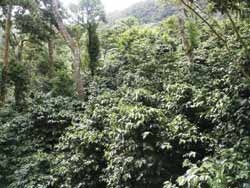 Not surprisingly, then, this price slump proved disastrous for many farmers of shade-grown beans. Unemployment rates skyrocketed from Ethiopia and Kenya to Latin America, hitting 80 percent in parts of Nicaragua and Guatemala. In 2001, Oxfam issued a statement saying unless the price paid to coffee farmers improved, it would “consign millions of poor coffee farmers and their families to extreme poverty, with devastating consequences for health, education and social stability.” According to Rainforest Alliance’s Vigilante, “The impact on the environment is devastating during very low price years, because farmers are often forced to convert their land into cattle pastures or other destructive uses.” This can include making ends meet by liquidating holdings into lumber or switching to sugar cane or plastic greenhouses for ornamental plants. The British Fairtrade Foundation estimated that by the end of 2001, some 1,000 of Colombia’s 560,000 coffee farms had begun cultivating coca or opium poppies out of desperation. “In Panama, I started crying when I heard from a Rainforest Alliance-certified farmer that his neighbor just converted his beautiful shade farm into a golf course,” says Vigilante. “People assume coffee farmers are being taken care of, and then they wonder why South Americans are found dead in a van near the U.S. border or why desperate people would blow up our embassies,” says Dean’s Bean’s Cycon. Coffee prices rose steadily through 2004 and the first months of 2005, and settled around $1.10 a pound during the middle of the year. While this is good for farmers, serious concerns remain. “Many coffee farmers have incurred substantial debt because of the price crisis, and it will carry over for many years,” cautions Daniele Giovannucci, a senior consultant for the World Bank. “I think it is patently absurd to say the crisis is over,” he says. “The true crisis is in the fact that coffee prices are so unstable, and that producers can’t plan for the future,” argues Stephen Greene, a spokesperson for Oxfam America, which recently released a report calling on the U.S. government to take a leadership role in addressing coffee issues. “The U.S. just rejoined the International Coffee Organization, and it should take an active role by pushing for price stability,” says Greene. “The U.S. has allocated money through USAID to help small-scale farmers, and what they need is access to commercial credit, technical assistance and information, participation in international debate and help with marketing. Coffee farmers tend to be very poor and marginalized, and they need help diversifying their incomes.” Other ways groups around the world are helping small coffee farmers and wage workers make ends meet, as well as improve their environmental sustainability, include varied certification programs, such as the organic and Fair Trade movements (see sidebar). “We have to look at the coffee market today, and ask ourselves what’s not sustainable,” says Greene. “A lot of economists are promoting free trade, but a lot of the things going on in the coffee market are counter to free trade, such as the oligopoly of companies that control the industry. If the commodity market doesn’t work for the majority of producers, questions need to be asked.” Barons of the Beverage
Since the collapse of the international coffee cartel, about half of the world’s coffee has been controlled by four corporations: Kraft (brands include Kenco and Maxwell House), Procter and Gamble (Folgers and Millstone), Sara Lee (specializes in the service sector, although retail lines include Chock full o’Nuts and Hill Bros.) and Nestle (the Swiss company’s Nescafé is the world’s number one java brand). Despite the hardships faced by coffee growers in recent years, these companies have earned robust profits. As Washington Monthly reported, “According to company documents, the Big Four’s coffee profit margins are as much as 25 percent—vastly higher than those for most other food products.” The magazine concluded, “Prices for specialty blends at supermarkets and cafés have risen, and even the price of mainstream coffee brands like Folgers has not dropped that much. Call it Economics 102—a new paradigm in which both producers and consumers lose.” “The recent increases in the price of green coffee have been more than increases in the price of retail coffee,” argues Joseph F. DeRupo, director of communications for the National Coffee Association. “The entire industry supports sustainability at all levels,” he says. “The coffee industry invests millions of dollars every year in sustainable production from feed to cup, including helping farmers with technical the lives of farmers with such projects as building schools, libraries and drinking water wells.” Asked if full-sun production is as environmentally sustainable as shade grown, DeRupo responds, “No. Shade-grown coffee clearly promotes the kind of environment that leads to sustainability. Without shade trees you lose the natural flora and fauna that help preserve the land and viable production for years to come.” “If we don’t take care of coffee-producing regions, it’s a south-to-north redistribution of wealth, and that’s just totally wrong,” says Cycon. “I don’t think the big coffee companies are really moving in a sustainable direction. I think activists have forced them to pay attention, so you’ll see marketing dollars go to small projects that look good. But if you pay people a decent amount of money, they can build their own wells.” However, with a growing number of more socially conscious and environmentally responsible options lining the shelves of coffee shops and supermarkets, consumers are in the driver’s seat to make sure their morning cups of joe don’t turn into cups of woe. BRIAN C. HOWARD is managing editor of E.
SIDEBARS
CONTACTS
National Audubon Society
1901 Pennsylvania Ave.
NW
Suite 1100
Washington, DC 20006
Phone: (202) 861-2242