Parasitol Res (2003) 90: 476–478DOI 10.1007/s00436-003-0881-y Susceptibility of head lice (Pediculus humanus capitis)to pediculicides in Australia Received: 15 January 2003 / Accepted: 12 March 2003 / Published online: 26 June 2003Ó Springer-Verlag 2003 Abstract Infestation with head lice, Pediculus humanus pediculicides in head lice is increasing in Australia and capitis, is a worldwide problem, especially among pri- elsewhere, there have been only a handful of papers with mary (elementary) school children. Although studies in empirical data on the susceptibility of head lice, and many diﬀerent countries indicate lower levels of sus- none from Australia. Doubtless, this is due to the diﬃ- ceptibility to certain insecticides than expected (‘‘resis- culty of working with live head lice. Head lice are diﬃ- tance’’), there is no empirical data from Australia. Data cult to maintain in culture and have short lives when on the susceptibility of head lice to malathion, pyreth- removed from the host. We report the ﬁrst empirical rums and permethrin were collected from four schools in data on the susceptibility of head lice to pediculicides in Brisbane and one school in northern Queensland. Since no completely susceptible strain of head lice was avail-able and head lice are diﬃcult to keep in culture, acompletely susceptible strain of body lice, Pediculus humanus humanus, was used for reference. All ﬁvegroups of head lice were less susceptible to malathion, We used the World Health Organisation (WHO)-style ﬁlter-paper pyrethrums and permethrin than were lice from the kill-assay to measure the susceptibility of head lice to malathion reference strain. Moreover, the degree of susceptibility (organophosphate), pyrethrums (natural pyrethroids) and per- to these insecticides varied substantially among schools.
methrin (synthetic pyrethroid). Since no insecticide-susceptible Thus, a pediculicide that controlled lice at one school in strain of head lice is available, a colony of body lice, Pediculushumanus humanus, which is completely susceptible to insecticides, Brisbane would not necessarily control head lice at an- was used for reference. This colony was founded from the colony of other school in the same city. These preliminary data Culpepper (1948), and was kindly supplied to us by Dr. K.
indicate that detailed information on the susceptibility Mumcuoglu (Department of Parasitology, Hebrew University, of the diﬀerent populations of head lice in Queensland to Hadassah Medical School, Jerusalem, Israel). Body lice were the diﬀerent insecticides available is needed to maximize maintained in the laboratory by feeding daily on rabbits (Mum-cuoglu et al. 1995). In between feeds, the lice were kept at 30–32°C the chance of eﬀective control of these increasingly and 70–80% relative humidity. Head lice were collected by dry- combing from the hair of one to ten children from four primary(elementary) schools in Brisbane, Queensland, and a primaryschool in northern Queensland (Townsville State School). Sinceonly small numbers of lice were collected, these were pooled for the Technical grade malathion, pyrethrums (50% concentration) Goldsmid (1990) reported the ﬁrst evidence of the failure and permethrin was kindly donated by Biotech Industries, Bris- of pediculicides to control head lice (Pediculus humanus bane, Australia. The WHO-style ﬁlter-paper kill-assay was used to capitis) in Australia. This evidence was from Tasmania in southern Australia. While anecdotal reports suggestthat certain pediculicides fail to control certain popula- Fig. 1 Percent cumulative mortality of the reference strain tions of head lice and that the prevalence of resistance to (laboratory colony of completely insecticide-susceptible body lice)and head lice from ﬁve schools in Queensland, Australia.
Malathion is represented by a diamond, permethrin by a squareand pyrethrums by a triangle. At Kenmore State School there was J. A. Hunter Æ S. C. Barker (&) zero mortality for all three insecticides 240 min after ﬁrst exposure.
Department of Microbiology and Parasitology, For Murrarrie State School the mortality at 180 min was 13% for both malathion and pyrethrums and 0% for permethrin; at University of Queensland, 4072 Brisbane, Australia 240 min, all pediculicides had caused a cumulative mortality of 13%. These data are not obvious from the ﬁgure 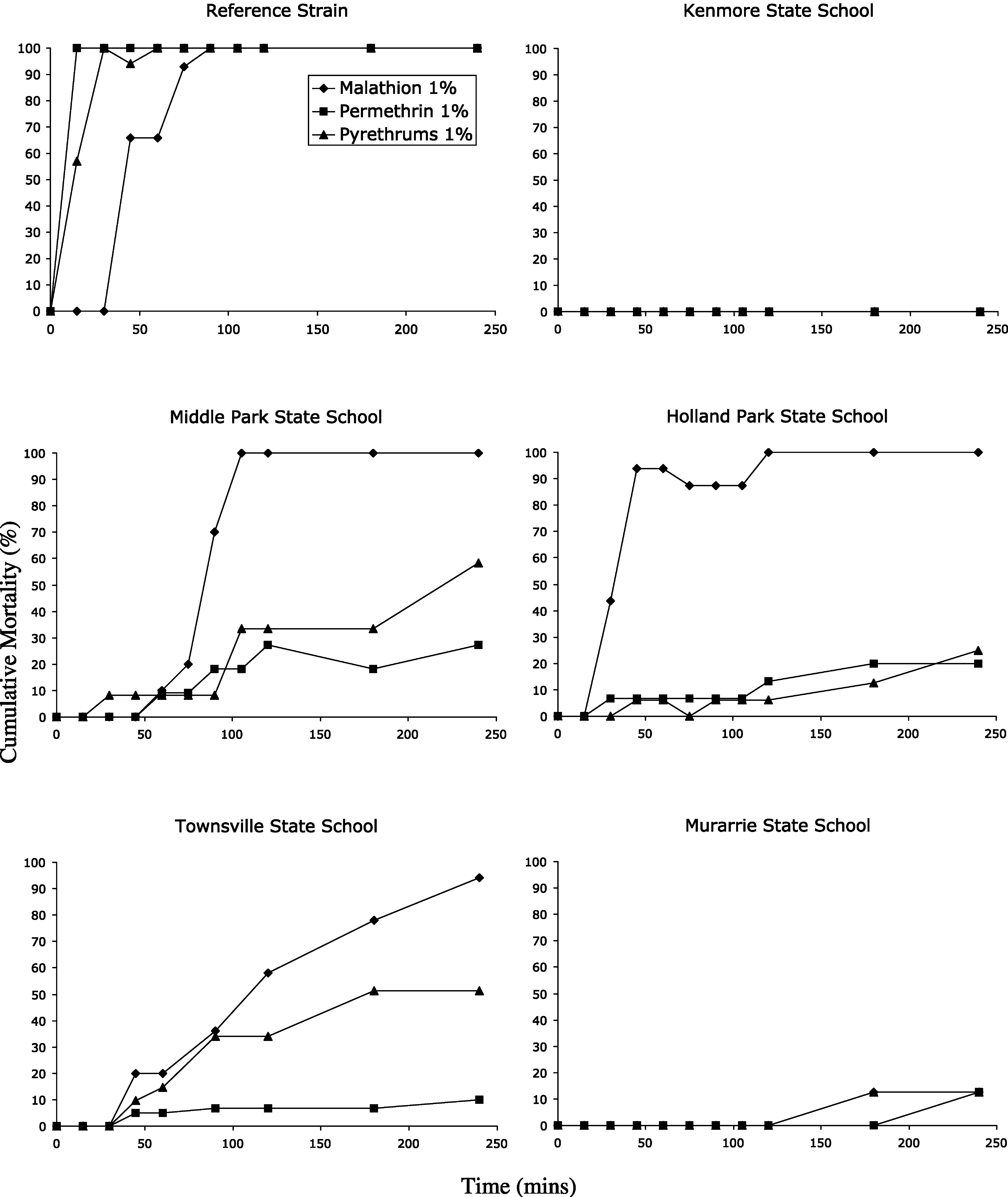 measure the mortality of lice. These insecticides were prepared papers (no insecticides) were treated with silicone ﬂuid and acetone as 1% volume/volume solutions in silicone ﬂuid (a solvent for crystalline insecticides like permethrin and pyrethrums) (Dow Adult lice and third-stage nymphs were tested in batches of ten Corning 556). Each solution was mixed 1:1 with acetone to facili- or more insects. Mortality was recorded every 15 min for up to tate impregnation of ﬁlter papers (Whatman no. 4). The ﬁlter 24 h after ﬁrst-exposure. Groups of ten lice from the reference papers were evenly spread with 1 ml of the mixture, and then left to strain were placed on ﬁlter papers treated with silicone ﬂuid and dry in a fume hood so that the acetone could evaporate. Filter acetone only. Mortality was deﬁned as the inability of a louse to papers were then stored in aluminium foil at 4°C until use. Control right itself when rolled onto its back.
certain pediculicides control lice at one school, but not at other schools in Brisbane. Detailed informationabout the degree of susceptibility of diﬀerent popula- The reference strain of body lice, as expected, was highly tions of head lice in Queensland to the available insec- susceptible to permethrin at a concentration of 1% with ticides is needed to maximize the chances of eﬀective almost immediate responses, i.e. seizures. In most tests, 100% mortality was recorded at the ﬁrst reading(15 min). Responses to pyrethrums were slower than to Acknowledgements We thank Kosta Mumcuoglu for advice and permethrin and malathion but there was at least 50% for giving us the body lice from which we founded our laboratory mortality after 1 h and 100% mortality after 3 h. In colony. Helen Weld and Cheryl Thomas for hosting our work in most tests with malathion there was 100% mortality Yungaburra, and Claire Ellender, Anna Murrell and ConorMcMeniman for help with the ﬁgures. Rick Speare provided after 1 h. No diﬀerence in mortality was evident from helpful advice. Biotech Industries, Brisbane, Australia, gave us the papers that were fresh and those that were up to The susceptibility to malathion, pyrethrums and permethrin of the head lice tested varied substantially among schools (Fig. 1). For example, the lice fromKenmore State School and Murarrie State School were Culpepper GH (1948) Rearing and maintaining a laboratory not susceptible to malathion (0% and 13% mortality colony of body lice on rabbits. Am J Trop Med 28:499–504 after 240 min), yet 94–100% of lice from the other Goldsmid JM (1990) Head louse treatment: is there an insecticide schools were dead after 240 min exposure.
resistance problem? Med J Aust 153:233–234 Mumcuoglu KY, Hemingway J, Miller J, Ioﬀe-Uspensky I, These preliminary data indicate that particular Klaus S, Ben-Ishai F, Galun R (1995) Permethrin resistance in insecticides are likely to be more eﬀective in some school the head louse Pediculus capitis from Israel. Med Vet Entomol than others. This is consistent with anecdotes that