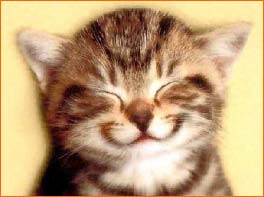 KNOWLEDGE BITES- BROUGHT TO YOU BY D&M RESEARCH
Welcome to Knowledge Bites, periodic bite sized pieces of knowledge exchange, designed to be consumed immediately without ruining your appetite for the rest of the day. Mirror, Mirror on the wall, who is the happiest of them all?
Knowledge Nibble
“Happiness is not a goal. It is a by-product” D&M recently undertook attitudinal research with Australian consumers. We asked them to rate their agreement with 22 statements describing opinions on a range of topics from finances to self-perception and social preferences. In this issue of bytes we focus on overall happiness: Who is the happiest? Who is the least happy? And how do people's attitudes differ in relation to their level of perceived happiness? Internationally renowned happiness researcher and guru Dr Martin Seligman, in a recent address to the AFR Boss Club, said that in his view a full life consists of positive emotion, engagement and meaning. How do Australians measure up in relation to their attitudes along these lines? 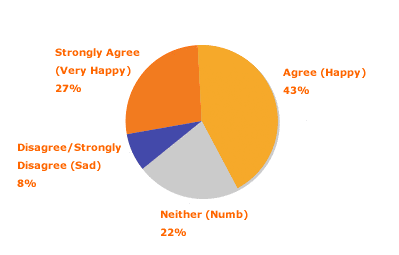 Firstly, who is more likely to agree with the statement “Overall I'd say I am happy”? We found most differences lie at the upper end of the scale, in the proportion of those who strongly agree. Overall this was 27% of our sample of 729 consumers after weighting. Significant differences were found amongst almost all demographic groups, as you will see below. “Overall I'd say I am happy”
Females are more likely to be very happy (31%) than males (22%), along with those who are aged 50+ (35%) compared to 18-49 year olds (22%). Having a partner also seems to equate with greater happiness (33%) compared to those who are single (18% - the lowest level of all the demographic groups). Household type has an impact- only 19% of pre nesters without children are very happy, compared to 27% of those with children. It is the empty nesters who are happiest though, at 34%. Those who own their home outright are more likely to be very happy (34%) compared to those who have a mortgage (24%) or rent (25%). And it seems those living in apartments are less likely to be very happy (19%) compared to those living

Queensland is by far the happiest state, with 36% who are very happy, the highest proportion of any demographic group, and significantly higher than the other states. NSW/ACT has the lowest number who are very happy at 23%, though SA/NT (24%) Those who are not working also have high happiness (32%), followed by part-timers (29%). Students are next (24%) with full-timers the lowest on 22%. Interestingly, things that don't seem to have a strong influence are being the main income earner, your household income, your level of education or whether you live in a capital city or not. Attitudinal differences
We also found some attitudinal differences between those who are happy versus those who are “numb” or sad. Those who are very happy are the most likely to agree that family is the most important thing to them (88%), dropping to 62% amongst those who are sad. Very happy people are also most likely to try new and different things (76%), compared Very happy people think they have more self-confidence than most people (54%) followed by happy people (41%), while only 23% of numb and sad people feel this. There seems to be a direct relationship between happiness and trust placed in others, with 56% of those who are very happy agreeing that generally speaking most people are trustworthy and honest, falling to 25% amongst sad people. Sad people are more likely to agree that society is losing its morals (78%) and more of them worry a lot about their personal security (48%). The biggest difference however comes from feeling there is not enough balance in their lives, with 67% of sad people agreeing with this, compared to only 27% of happy people, and 20% of very happy people. Attitudes that don't seem to be influenced by level of happiness include: financial security being very important (77% overall); understanding one's inner self being more important than being famous, powerful or wealthy (67% overall); preferring to spend a quiet evening at home than go out to a party (67% overall); and one's greatest achievements being ahead (56% overall).

Next steps
So it seems that to be happiest in Australia today it helps to be female, aged over 50 (and retired), married (with children who have left home), living in a house (that you own outright), and/or living in Queensland! These results suggest, as Eleanor Roosevelt said, “happiness is a by-product rather than a goal”. It emerges with the experience of age and achievement of milestones in life like finding a partner, having a family, and owning your home. Money, education and city living do not seem to be pre-requisites, though often this is what society focuses on, possibly to our detriment. It also helps to cherish your family, be self-confident and open to new things, believe in the good of others and have a balanced life. These provide the positive emotion, engagement and meaning that Dr Seligman believes is key to a full, happy life. So what, if any, is the key to happiness? The simplest answer, it seems, is to enjoy life! Final thought
But as Ed Diener of the University of Illinois recently commented. "Almost always it has been assumed that things that correlate with happiness are the causes of happiness, but it could be just the opposite" - Ed Diener SECOND HELPINGS!
Want to know more?
Want to know more? - We are happy to provide more information on any of the information in Knowledge Bites. To get dessert please forward your requests to Chris or call us on 02 9565 2655. You can also purchase this or any previous full reports on Knowledge Bites for $250 plus GST. In the next issue, we look at what activities might differentiate Australians. Ed Diener quoted in New Scientist, p7, 24/31 December 2005

Trigeminal neuralgia is a rather rare disease with between 4 and 40 new cases – depending on the study quoted – per 100,000 persons each year. The disease usually affects people aged 40 and older and strikes 1.5 times as many women as men. Patients with trigeminal neuralgia typically experience attacks of intense pain lasting for several seconds on one side of the face. The pain usually