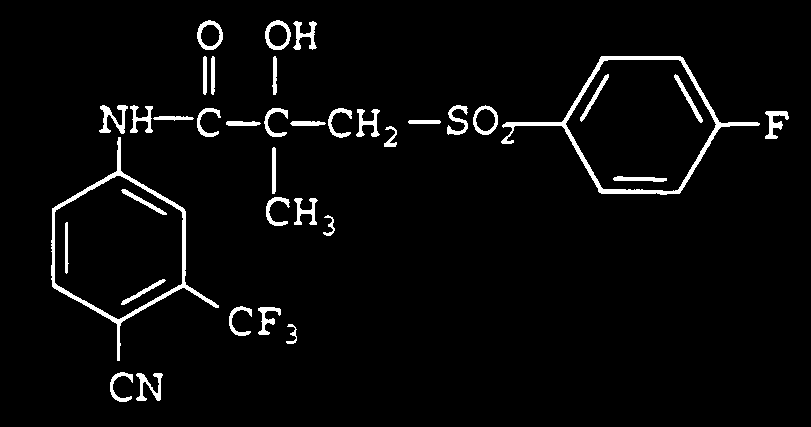 CASODEX®
(bicalutamide)
TABLETS
DESCRIPTION
CASODEX® (bicalutamide) Tablets for oral administration contain 50 mg of bicalutamide, a
non-steroidal antiandrogen with no other known endocrine activity. The chemical name is
propanamide, N-[4-cyano-3-(trifluoromethyl)phenyl]-3-[(4-fluorophenyl)sulfonyl]-2-hydroxy-2-
methyl-,(+-). The structural and empirical formulas are:

Bicalutamide has a molecular weight of 430.37. The pKa' is approximately 12. Bicalutamide is
a fine white to off-white powder which is practically insoluble in water at 37°C (5 mg per 1000
mL), slightly soluble in chloroform and absolute ethanol, sparingly soluble in methanol, and
soluble in acetone and tetrahydrofuran.
CASODEX is a racemate with its antiandrogenic activity being almost exclusively exhibited by
the R-enantiomer of bicalutamide; the S-enantiomer is essentially inactive.
The inactive ingredients of CASODEX Tablets are lactose, magnesium stearate, hypromellose,
polyethylene glycol, polyvidone, sodium starch glycollate, and titanium dioxide.
CLINICAL PHARMACOLOGY
Mechanism of Action
CASODEX is a non-steroidal antiandrogen. It competitively inhibits the action of androgens by
binding to cytosol androgen receptors in the target tissue. Prostatic carcinoma is known to be
androgen sensitive and responds to treatment that counteracts the effect of androgen and/or
removes the source of androgen.
When CASODEX is combined with luteinizing hormone-releasing hormone (LHRH) analogue
therapy, the suppression of serum testosterone induced by the LHRH analogue is not affected.
However, in clinical trials with CASODEX as a single agent for prostate cancer, rises in serum
testosterone and estradiol have been noted.
In a subset of patients who have been treated with CASODEX and an LHRH agonist, and who
discontinue CASODEX therapy due to progressive advanced prostate cancer, a reduction in
Prostate Specific Antigen (PSA) and/or clinical improvement (antiandrogen withdrawal
phenomenon) may be observed.
Pharmacokinetics
Absorption:
Bicalutamide is well-absorbed following oral administration, although the absolute
bioavailability is unknown. Co-administration of bicalutamide with food has no clinically
significant effect on rate or extent of absorption.
Distribution:
Bicalutamide is highly protein-bound (96%). See Drug-Drug Interactions below.
Metabolism/Elimination:
Bicalutamide undergoes stereospecific metabolism. The S (inactive) isomer is metabolized
primarily by glucuronidation. The R (active) isomer also undergoes glucuronidation but is
predominantly oxidized to an inactive metabolite followed by glucuronidation. Both the parent
and metabolite glucuronides are eliminated in the urine and feces. The S-enantiomer is rapidly
cleared relative to the R-enantiomer, with the R-enantiomer accounting for about 99% of total
steady-state plasma levels.
Special Populations:
Geriatric:
In two studies in patients given 50 or 150 mg daily, no significant relationship between age and
steady-state levels of total bicalutamide or the active R-enantiomer has been shown.
Hepatic Insufficiency:
No clinically significant difference in the pharmacokinetics of either enantiomer of bicalutamide
was noted in patients with mild-to-moderate hepatic disease as compared to healthy controls.
However, the half-life of the R-enantiomer was increased approximately 76% (5.9 and 10.4 days
for normal and impaired patients, respectively) in patients with severe liver disease (n=4).
Renal Insufficiency:
Renal impairment (as measured by creatinine clearance) had no significant effect on the
elimination of total bicalutamide or the active R-enantiomer.
Women, Pediatrics
Bicalutamide has not been studied in women or pediatric subjects.
Drug-Drug Interactions:
Clinical studies have not shown any drug interactions between bicalutamide and LHRH
analogues (goserelin or leuprolide). There is no evidence that bicalutamide induces hepatic
enzymes.


In vitro studies have shown that R-bicalutamide is an inhibitor of CYP 3A4 with lesser inhibitory
effects on CYP 2C9, 2C19 and 2D6 activity. Clinical studies have shown that with co-
administration of CASODEX, mean midazolam (a CYP 3A4 substrate) levels may be increased
1.5 fold (for Cmax) and 1.9 fold (for AUC). Hence, caution should be exercised when
CASODEX is co-administered with CYP 3A4 substrates.
In vitro protein-binding studies have shown that bicalutamide can displace coumarin
anticoagulants from binding sites. Prothrombin times should be closely monitored in patients
already receiving coumarin anticoagulants who are started on CASODEX.
Pharmacokinetics of the active enantiomer of CASODEX in normal males and patients with
prostate cancer are presented in Table 1.
Table 1
Normal Males (n=30)
Patients with Prostate Cancer (n=40) 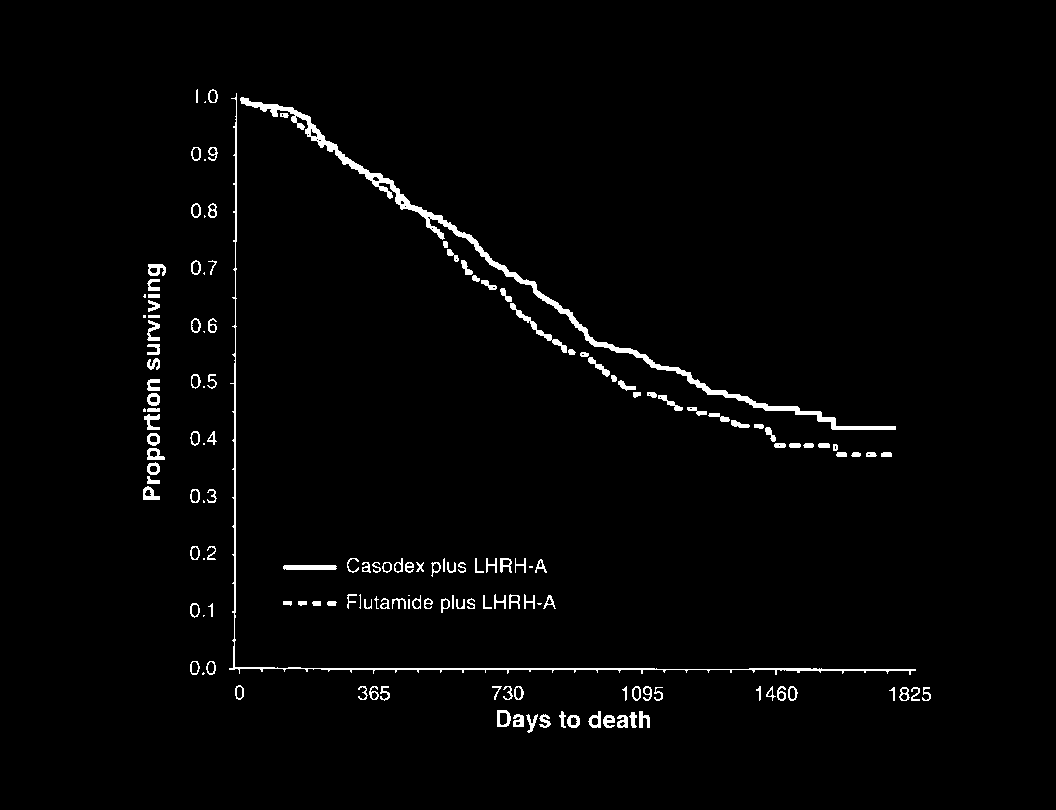 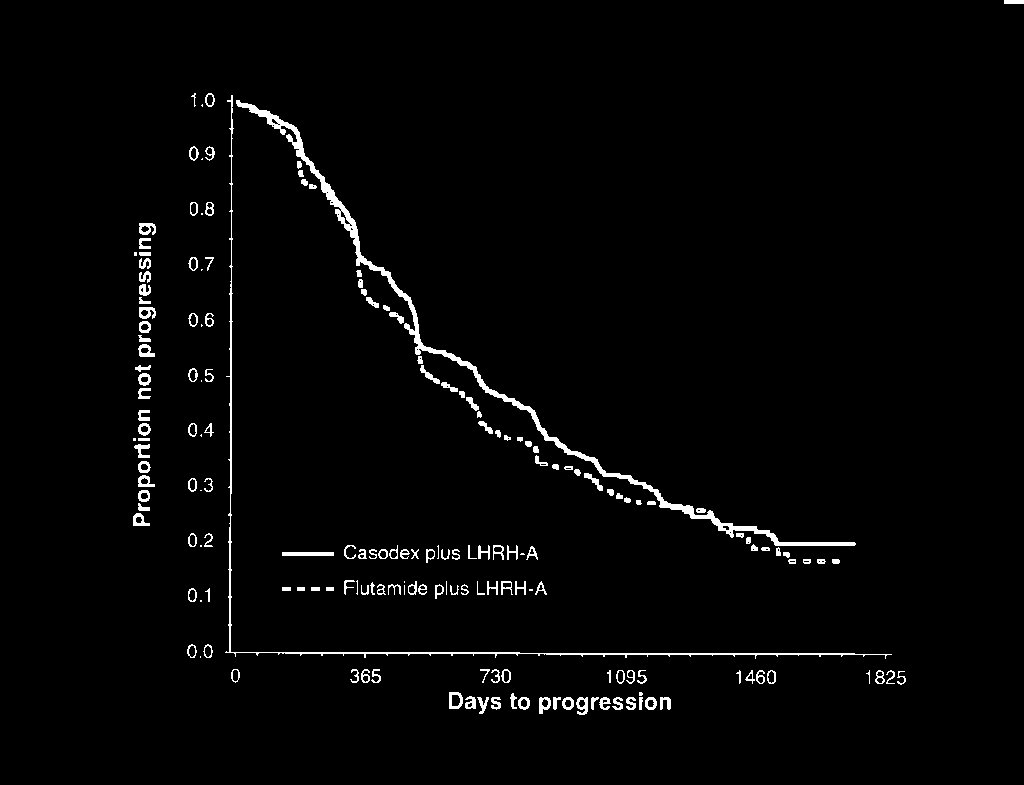 In an analysis conducted after a median follow-up of 160 weeks was reached, 213 (52.7%)
patients treated with CASODEX-LHRH analogue therapy and 235 (57.5%) patients treated with
flutamide-LHRH analogue therapy had died. There was no significant difference in survival
between treatment groups (see Figure 1). The hazard ratio for time to death (survival) was 0.87
(95% confidence interval 0.72 to 1.05).
Figure 1 - The Kaplan-Meier probability of death for both antiandrogen treatment groups.
There was no significant difference in time to objective tumor progression between treatment
groups (see Figure 2). Objective tumor progression was defined as the appearance of any bone
metastases or the worsening of any existing bone metastases on bone scan attributable to
metastatic disease, or an increase by 25% or more of any existing measurable extraskeletal
metastases. The hazard ratio for time to progression of CASODEX plus LHRH analogue to that
of flutamide plus LHRH analogue was 0.93 (95% confidence interval, 0.79 to 1.10).
Figure 2 - Kaplan-Meier curve for time to progression for both antiandrogen treatment
Quality of life was assessed with self-administered patient questionnaires on pain, social
functioning, emotional well-being, vitality, activity limitation, bed disability, overall health,
physical capacity, general symptoms, and treatment related symptoms. Assessment of the
Quality of Life questionnaires did not indicate consistent significant differences between the two
treatment groups.
INDICATIONS AND USAGE
CASODEX is indicated for use in combination therapy with a luteinizing hormone-releasing
hormone (LHRH) analogue for the treatment of Stage D2 metastatic carcinoma of the prostate.

General: School fees are payable, per term, in advance. NO discount is offered for early settlement. Payment may be made by either cash or cheque. We cannot accept payment by Credit or Debit cards. You may also pay by electronic transfer through your bank. Our account details are available on request. A deposit will be required before the close of each term to secure placement for the su