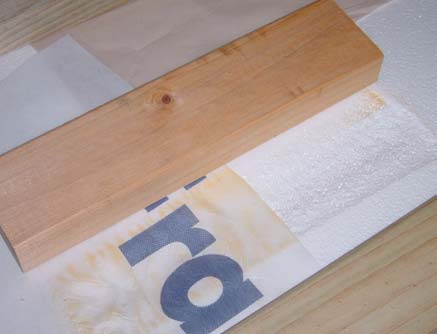 Background
With the increased use of LOSP treated framing, questions have been raised
about the effect of fixing polystyrene claddings onto treated framing. This trial
was set up by Osmose to determine whether there were any adverse effects
from fixing polystyrene claddings onto LOSP treated framing.
Trial Outline
Samples of 90 x 45 KD rougher headed radiata pine were treated in the LOSP
plant at Ahead Lumber, Pokeno. The wood samples were placed on top of
commercially treated packets of timber. One set of samples was treated using
the orange-dyed, H1 PLUS formulation (containing IPBC, permethrin and
water repellents in Exxon Mobil Pegasol 3035 solvent) and the other was
treated with green dyed H3 export fluid (containing permethrin, tributyl tin
naphthenate and water repellents in the same solvent).
Within 24 hours, one set of treated wood samples were placed on top of the
polystyrene cladding supplied by James Hardie. Samples of building wrap
(Gib FrameGuard and JH Protek) were placed such that they separated some
of the wood samples from the cladding.
After a further 5 days, a second set of wood samples was placed onto building
wrap and the cladding. This delay was to simulate a normal, minimal amount
of drying prior to a building being clad.
The samples were maintained in an air-conditioned building at approximately
20ºC for this trial.
Observations
There was significant attack of the polystyrene where it was in contact with
the 24 hour-old H1 PLUS samples. This consisted of a col apse of the
expanded polystyrene between 6 and 11 mm in depth. There was also
significant transfer of the orange dye to the polystyrene and wrap. (see figure
1).
Figure 1: Polystyrene in contact with 24-hour old H1 PLUS LOSP 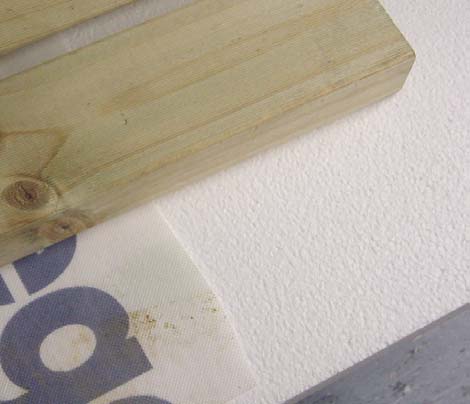 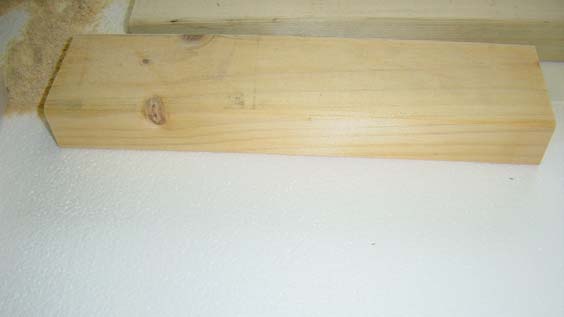 There was only very minor pitting where the 24 hour-old H3 LOSP treated timber was in contact, and little or no dye transfer (Figure 2). Figure 2: Polystyrene in contact with 24-hour old H3 LOSP timber For the samples that had been allowed to dry for 5 days, there was no effect on the surface of the polystyrene (figure 3). Figure 3: Polystyrene in contact with 5-day old H1 PLUS timber
The presence or absence of the building wrap made no difference to the
observed effects. Likewise the treated wood had no effect on the building
wrap although there was some dye discolouration from the 24-hour old
samples, especially the H1 PLUS.
Discussion
As expected, when very freshly treated LOSP treated framing is placed into
intimate contact with polystyrene, some col apse of the cladding can occur.
The significant difference between the H1 PLUS and H3 samples was
surprising; both chemicals contain the same solvent, and under commercial
conditions the fluid uptake of H3 in timber is higher than H1 PLUS (35 vs. 20
litres/m³). The active ingredients are not expected to play any part in the
breakdown of polystyrene. The interpretation from this trial is that the actual
uptake of fluid in the H1 PLUS samples used was unusually high, and higher
than the H3 samples. This is confirmed to an extent by the intensity of the
orange dye, which appears to be significantly stronger than normal. Thus it
would seem that the apparent difference has more to do with the fluid uptake
of individual pieces than the type or preservative involved.
The building wrap played no part in the movement of solvent which is
understandable given the vapour permeable nature of the wraps and the
vapour phase movement of solvent.
Where a reasonable amount of drying can take place before the contact, the
treated framing had no effect on the cladding. Under normal construction
conditions, treated framing would have adequate time between treatment,
pre-nailing, delivery and erection for the solvent levels to fall to levels that
have no effect on the cladding.
Where it occurred, the collapse of the polystyrene took place immediately,
and then no further collapse occurred. This is consistent with the rate of loss
of solvent from wood, which fol ows a typical decay-rate curve. Thus there are
not expected to be any long-term, on-going effects from solvent emissions.
Conclusions
Placing polystyrene claddings into contact with very freshly LOSP treated
framing can lead to the collapse of the surface of the cladding. The presence
or absence of building wraps has no effect on this.
Allowing the timber to dry for five days fol owing treatment has prevented any
damage to the cladding from occurring.
Under normal commercial conditions, more than five days drying would occur
before cladding was fixed to framing.
It is therefore expected that LOSP treated framing would be unlikely to have
any adverse effects on polystyrene claddings under normal conditions of use.
Terry Smith
Osmose NZ

How does irena compare to other treatment options.pub

A Hair Information Resource from Irene Stein How does Irena compare to other treatment options? Hair loss is a huge industry these days and both pharmaceutical companies and health supplement companies are not only battling for the market share, but also investing greatly in research to find a The two most widely accepted medical treatments are Minoxidil and Finasteride.

Dosing Guide The following are guidelines, based on weight, for several formulations of over-the-counter remedies you may use for your child(ren). As with any illness, consulting your physician, when in doubt, is ACETAMINOPHEN (Tylenol, Panadol, etc) * Do not give < 3 months, contact doctor first Children's Infants' Children's Soft Chews Strength Concentrated Susp