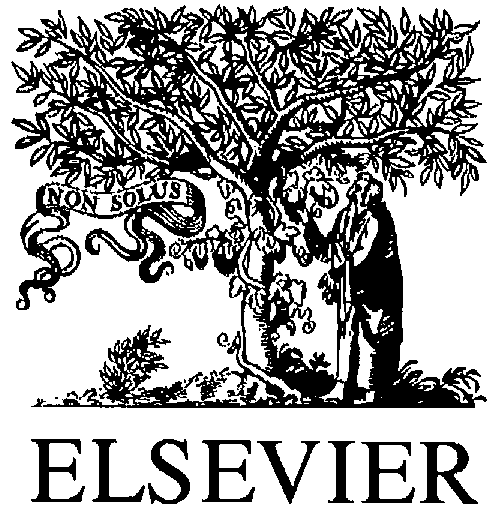 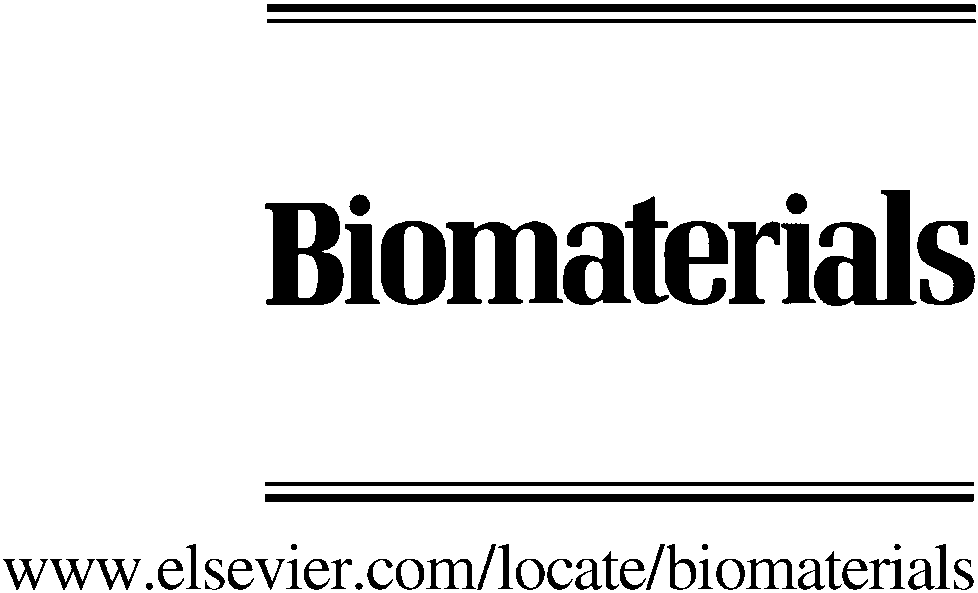 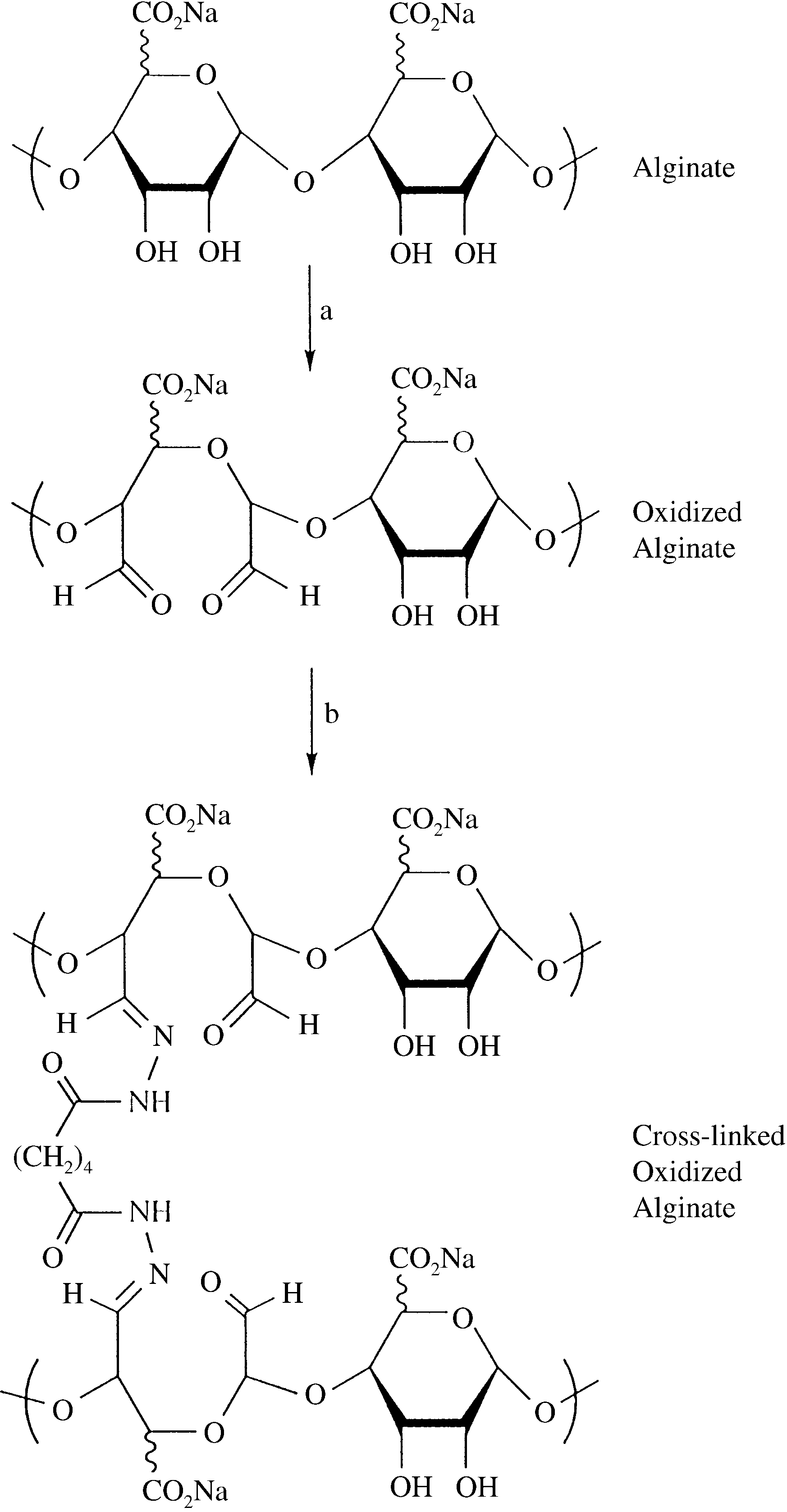 K.H. Bouhadir et al. / Biomaterials 22 (2001) 2625}2633 Table 1The experimental degree of oxidation of cross-linked oxidized alginatehydrogels. Reactions were run at a concentration of 0.8% w/w alginatein the dark at room temperature for 24 h Table 2Molecular weight distributions of alginate and oxidized alginates Represents the percentage equivalents of sodium periodate that was initially added to the reaction mixture (based on the uronate groups).
F(x) is the weight fraction of the polymer that have a molecular equivalents of sodium periodates formed a polymer witha weight-average molecular weight of 198 kDa (Table 2).
The weight-average molecular weight then decreased asthe percentage equivalents of periodate was increased toreach 29 kDa with 100% equivalents of sodium peri-odate. As a result, the intrinsic viscosity of the polymers Fig. 1. Synthesis and cross-linking of oxidized alginate: (a) sodium decreased as periodate concentration was increased.
Only 12.5% weight fraction of the original unmodi"edalginate has a molecular weight below 80 kDa. This num-ber increased to reach a value of 96% for alginate thatwas oxidized with 100 equivalents of sodium periodate The degree of swelling of cross-linked oxidized alginate hydrogels was analyzed after the hydrogels reached the equilibration swelling in dd. HO. The swelling ratio of these hydrogels varied signi"cantly depending on the Hydrogels were subsequently formed by the reaction concentrations of both the ionic and the covalent of adipic dihydrazide and the oxidized alginates. The cross-linkers. The swelling ratio of hydrogels made with hydrazide group reacts with the aldehyde groups in oxi- oxidized alginate (100 equivalents periodate) and cross- dized alginate to form hydrazone bonds (Fig. 1). The linked at 150 mM adipic dihydrazide was 29.9$1.2 in dd.
hydrogels were washed with water and soaked in dd.
HO (Table 3). The swelling ratio then decreased with HO for 24 h to release the unreacted adipic dihydrazide.
increasing concentrations of calcium to reach a minimum The gels were frozen and lyophilized. FTIR spectroscopic of 11.7$0.3 at 40 mM calcium ions. A similar trend was analysis of the discs indicated the disappearance of the observed when the concentration of covalent cross-links peak at 1730 cm\ and the appearance of another peak was increased. The swelling ratio was 20.1$1.2 at 40 mM at 1660 cm\ that corresponds to the stretching vibra- calcium ions at 50 mM adipic dihydrazide, and decreased tion of the carbonyl in the hydrazide group.
to 11.7$0.3 at 40 mM as the concentration of adipic 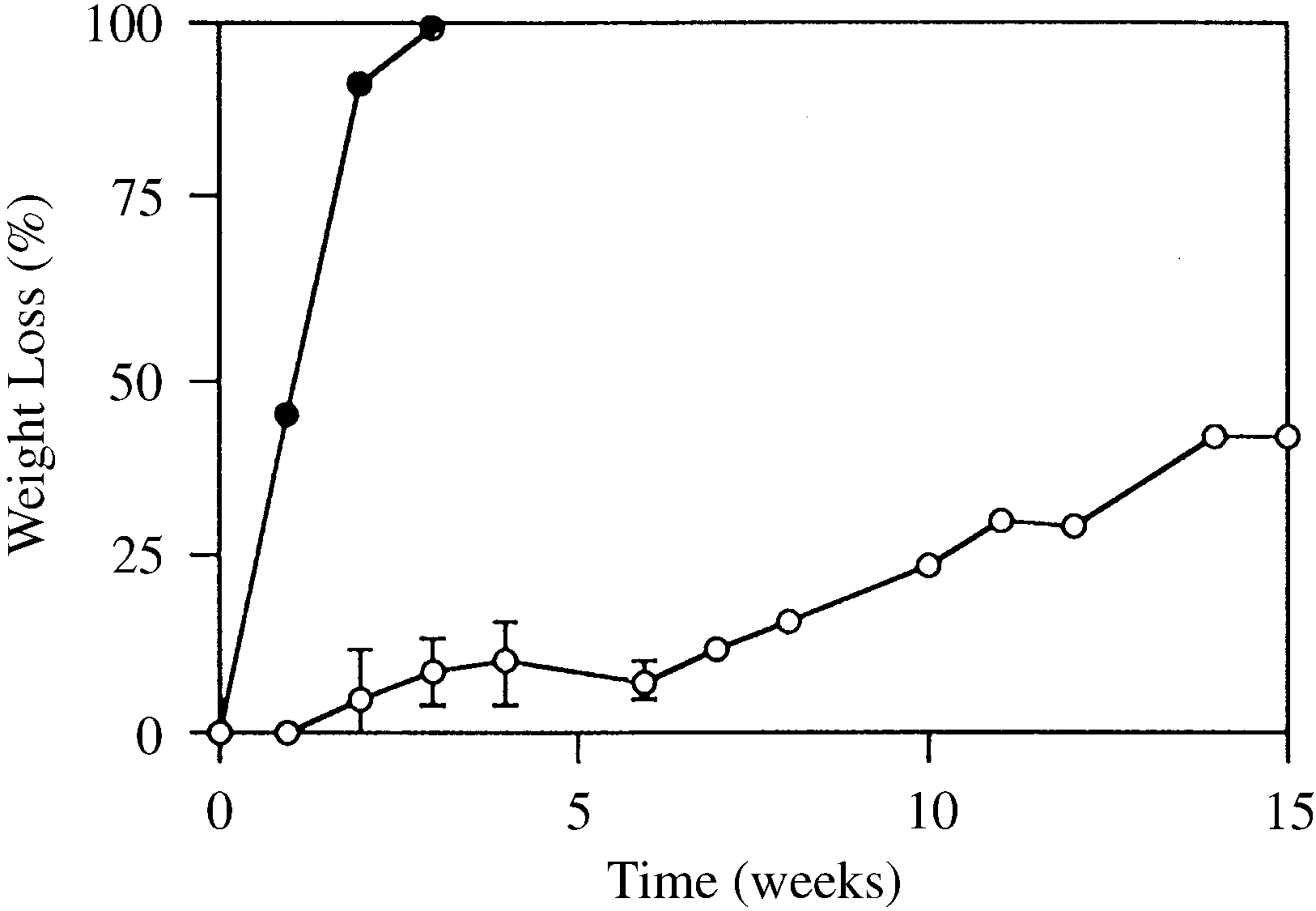 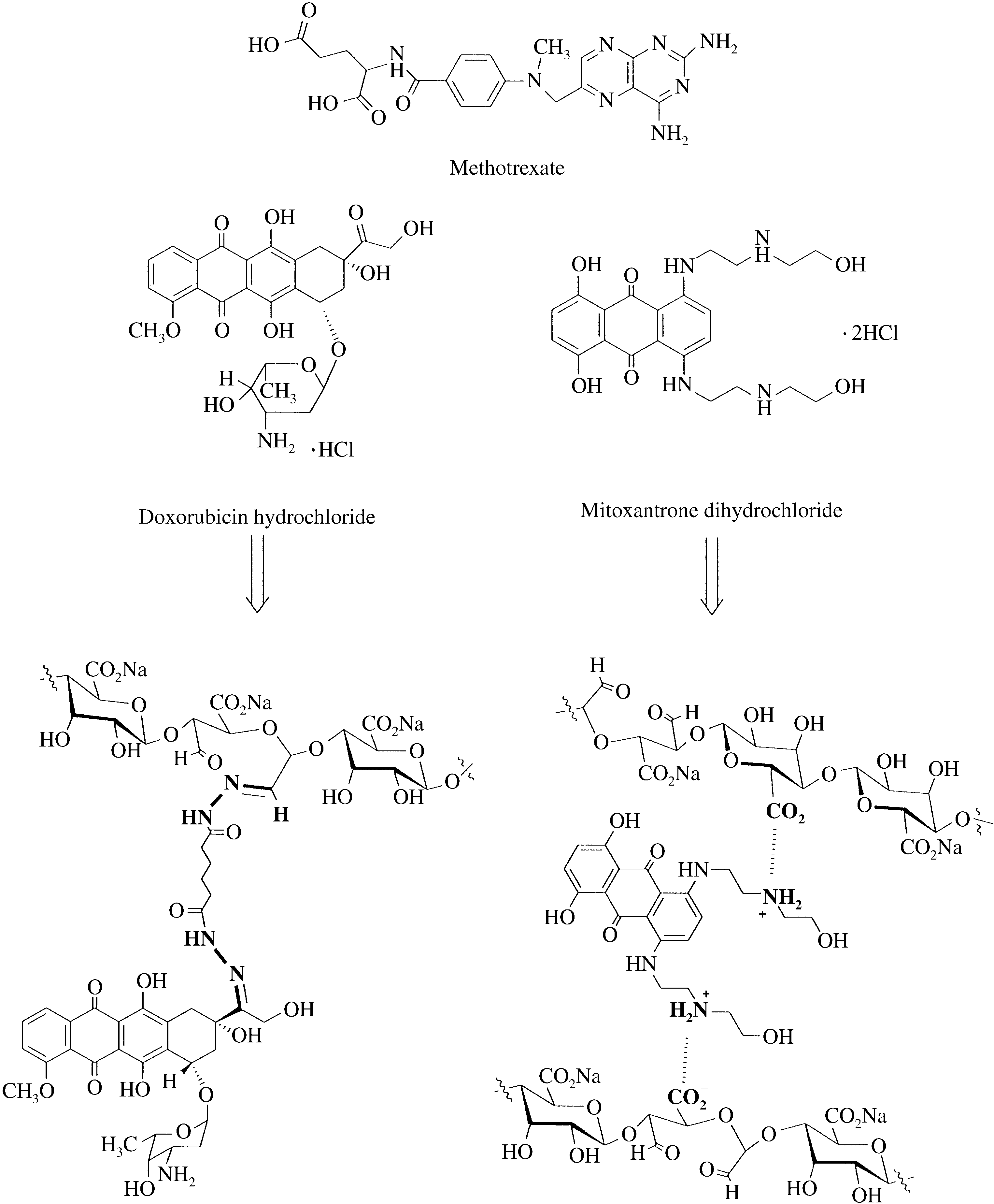 K.H. Bouhadir et al. / Biomaterials 22 (2001) 2625}2633 Fig. 3. Proposed mechanism for drug incorporation. Doxorubicin is chemically linked to oxidized alginate with a hydrazone bond. Mitoxantroneforms an ionic complex with the carboxylate groups.
adipic dihydrazide. Hydrogels formed at 75 and 100 mM of incubation as expected for an ionically interacting adipic dihydrazide released the entire drug after 3 and 6 days, respectively. However, hydrogels formed at To test the utility of oxidized alginate hydrogels in 150 mM adipic dihydrazide released only 7% of the delivering combinations of drugs, cross-linked oxidized loaded drug after 21 days of incubation.
alginate hydrogels have been loaded with all three drugs Methotrexate, doxorubicin, and mitoxantrone have simultaneously. Methotrexate was quantitatively re- also been separately incorporated into calcium cross- leased after 9 days of incubation (Fig. 6). Doxorubicin linked alginate hydrogels, and their release monitored was released slowly at a rate of 1.7% per day for 13 days spectrophotometrically as a control. Methotrexate was followed by a rapid release of 19.5% per day during the quantitatively released after 8.5 h of incubation at 373C last 4 days (Fig. 6). Mitoxantrone, on the other hand, was as expected. Doxorubicin was released over a 3.5 day not signi"cantly released during the initial 10 days. How- time period (Fig. 5). The release of mitoxantrone ever, a rapid release of 24% per day was observed during from alginate hydrogels was negligible over the "rst week 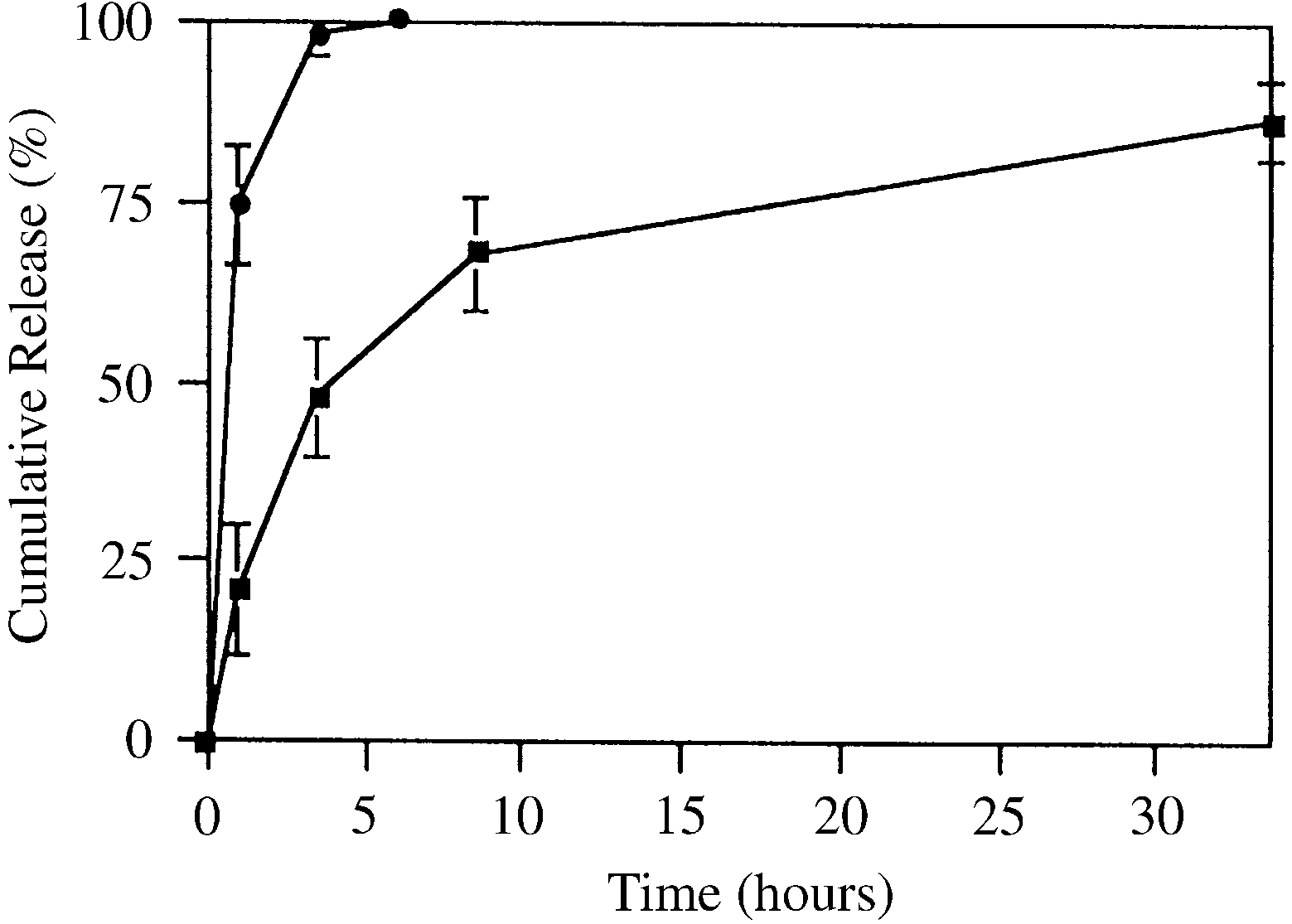 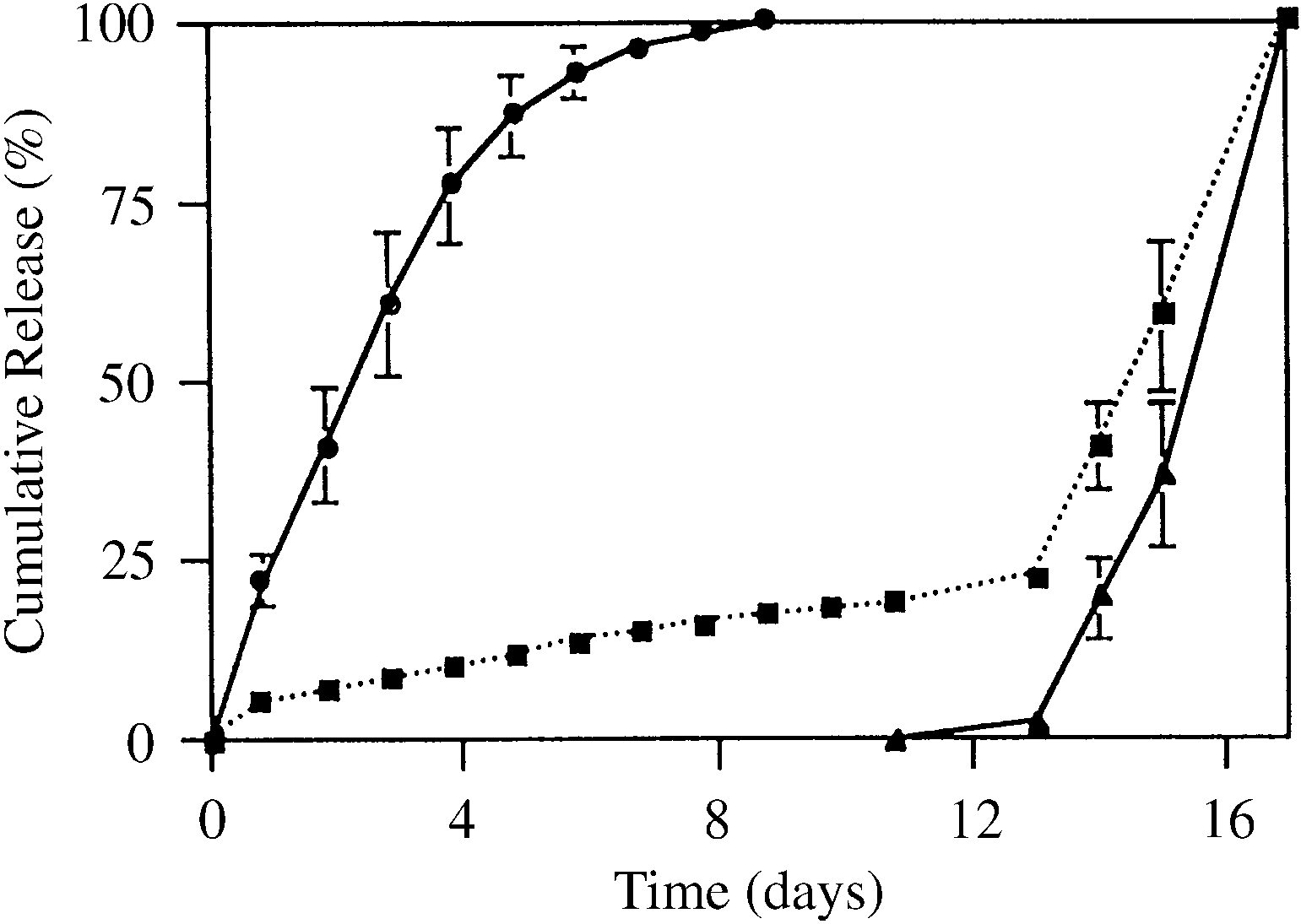