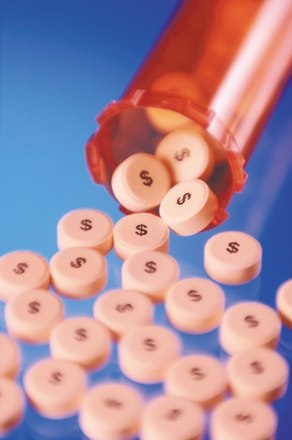 2001 Nature Publishing Group http://biotech.nature.com
Monopoly moneyStrategies used by the pharmaceutical industry to alleviate the pain of patent expiration provide somevaluable lessons for the biotechnology sector. . .and also some cautionary tales, says Alan Dove.
h.nature
There is an old saying that the inventor an exclusive market for the inven- tion for at least 20 years from the date the application was filed. On paper at least, all 140 nations that are currently members of the WTO provide this level of patent pro- patents. Twenty-five years ago, the biotech- In most industries, including agricultur- oup http://biotec
al and industrial biotechnology, a patent isms and recombinant proteins. Today, it is lishing Gr
a rapidly maturing industry, with market- clout. But as it becomes more mature, the industry will also begin to suffer from new Octogenarians at the gate
On 25 April 2001, a coalition of consumer covering some of its early products being groups, spearheaded by a senior citizens’ just one. In this respect, pharmaceutical 2001 Nature Pub
filed a class-action lawsuit against Bristol- sophisticated ways to protect their patents and profits, and some of these approaches will be broadly applicable to the biotech- practices. Specifically, the Panthers argue patent-listing procedures to block pending The point of patents
competition once the patent expired. Matt Patents were originally conceived in the 18th century as a legal tool to encourage indus- trial innovation. To receive a patent, an $100 million. Bristol-Myers Squibb denies invention must fulfill three criteria: it must be novel, useful, and not be obvious from has, once it gets on the market, only about suit filed in April, plaintiffs claim that 8.5 years of effective life left before its patent runs out. With the partial restora- $90 million to Upsher-Smith (Minneapolis, insecticide), methods of production (e.g., a MN) and ESI Lederle (Philadelphia, PA), a way of making the insecticide), or devices (e.g., a sprayer to apply insecticides to A Waxman–Hatch style “patent restora- tion term” for pharmaceuticals is not avail- able in the European Union and Canada.
marketplace, during which competitors are prevented from selling their own versions Waxman–Hatch style ruling would have less Biotechnol, 19, 497, 2001). These lawsuits
impact on product sales for medicines than it does in the United States because of the tight price controls on prescription drugs in extend marketing exclusivity on profitable implemented differently in different coun- these regions. Canada is currently in the tries. To establish uniformity, the General process of reviewing its patent laws in an Agreement on Tariffs and Trade—replaced biotechnology, and one of the issues being 1995—drew up international standards for Alan Dove is a freelance writer working in Philadelphia, PA ([email protected]). (TRIPs) agreement, a patent must grant the • VOLUME 19 • nature biotechnology

2001 Nature Publishing Group http://biotech.nature.com
However, a specific technique, such as a sur- explains: “We are considerably behind both delivery systems. Companies can, for exam- gical procedure or, possibly, the delivery of a ple, create a version of a brand-name drug particular gene to a particular tissue, cannot that can be given just once a day, because the patent on the new system will enjoy an addi- plants and animals are patentable.” The tional 20 years of market exclusivity. For example, CBAC’s Gold says: “The gene ther- CBAC is soliciting public input on its draft example, Pfizer (New York) recently intro- apy or the vector can be patented, but the report, expecting to submit its final recom- duced Glucotrol XL, a once-daily version of injection into the body is not patentable.
mendations to Parliament in late June.
its popular diabetes drug, Glucotrol (glip- Usually it won’t make a big difference, but izide). The new product constitutes a novel Patent proof
formulation of the original branded drug, Even with the implementation of a patent- Industry experts agree that some biotech- h.nature
restoration term, all drug patents eventually rays—are still too new to predict the impact become aggressive in their attempts to avoid of the expiration of their patents. If the the inevitable loss of profit. According toanalysts, the absence of prescription-drugprice controls, the presence of a robust Developing new delivery techniques to extend marketing
generic-drug industry, and easy access to oup http://biotec
exclusivity—so-called evergreening—may eventually become
civil courts, have combined to make theUnited States the focus of most efforts to more difficult for biotechnology companies in Europe and Canada,
neither of which allows patents on “medical treatments and
Michael Krensavage, a health care analyst lishing Gr
surgical methods.”
York), says that pharmaceutical companies“have been very creative” about protectingexclusivity for their blockbuster drugs. Forexample, in 1993, SmithKline Beecham Partners (New York), says: “There’s very lit- tle risk [of carrying out such trials], because the pharmaceutical industry, chip manufac- all the toxicology is well known to the FDA.” turers might try to block generic competi- 2001 Nature Pub
generic version of its ulcer drug Tagamet Generic versions of the original drug may be tion in similar ways. Alternatively, the DNA (cimetidine) infringed its patent because the manufactured and sold, but the new brand- chip business might follow the pattern of pills were the same color. “The way the law ed formulation has the distinct competitive rapid pace of innovation has often rendered FDA-required halt period) to settle these things in court,” says Krensavage. The gener- ic drug cannot be sold while the case is in tions, drug makers can try to deliver the The trouble with proteins
drug in more innovative ways, such as trans- monopoly is therefore extended. Krensavage dermal patches or implanted capsules.
protein therapeutics are highly resistant to explains: “Millions of dollars a day in sales generic competition, primarily because of adds up to a lot of attorneys’ fees, so while needle-free ways to deliver drugs through the regulatory structure of drug-approval your efforts don’t have to be valid, you can the skin (e.g., PowderJect; Oxford, UK) or agencies, such as the US FDA. A therapeu- lungs (e.g., Inhale; San Carlos, CA).
tic small molecule is classified as a “drug”, Lawsuits do not even have to go to court in Pharmaceutical companies are keen to col- but proteins (and vaccines) are considered order to extend a brand-name monopoly. In a laborate with such companies. Indeed, one “biologics” and are governed by different motivation for Johnson & Johnson’s (New increasingly prevalent, a brand-name manu- Brunswick, NJ) recent high-profile $10 bil- facturer will sue the generic company, and the lion acquisition of drug-delivery pioneer generic small molecule after the patent has two companies then reach a “settlement” in expired needs only to demonstrate that it is delivery systems that it intends to use to chemically and biologically equivalent to competitor to stay out of the market. Drug rejuvenate its ageing drugs pipeline (Nat. the brand-name product—tests that are far manufacturers deny accusations that these Biotechnol. 19, 398, 2001).
less expensive to conduct than full-scale arrangements violate antitrust laws—and clinical trials de novo. However, a biologic between patent protection and the spirit of to carry out a completely new set of clinical more difficult for biotechnology companies trials to bring the generic product to mar- groups alike say that such “settlements” smack ket, making generic proteins a less favor- of collusion (see “Octogenerians at the gate”).
allows patents on “medical treatments and able business proposition (Nat. Biotechnol.
surgical methods.” The prohibition is subtle: 19, 117, 2001).
New delivery routes
a drug can be patented under “unique com- A more sustainable approach for small-mol- position of matter,” and a device that deliv- tics are avidly pursuing patentable improve- ecule drug developers is to formulate brand- ers the drug can be patented as a “device”.

2001 Nature Publishing Group http://biotech.nature.com
(Indianapolis, IN), for example, was able to Agricultural agro
numbers: most of the patents in the field are The situation for agricultural biotechnology is less clear, in that the most successful prod- companies, making it unlikely that a generic ucts to date—Bt transgenic crop strains and manufacturer could compete successfully.
herbicide-tolerant plants—still have more Still, as future patent rules evolve, biotech- begun phase 3 clinical trials of Aranesp, a than 10 years of patent protection remain- nology companies, like their pharmaceutical version of recombinant human erythropoi-etin that will last longer in the bloodstream.
Amgen’s original erythropoietin patent The most successful products to date—Bt transgenic crop strains
and herbicide-tolerant plants—still have more than 10 years of
wise not to rest on their laurels. Pedro de patent protection remaining.
h.nature
Noronha Pissarra, president of Biotecnol(Porto Salvo, Portugal), explains: “Oneshould not forget that biotechnologygenerics are already being marketed out- counterparts, will have to continue to swal- low the bitter pill of patent expiration.
States, and to my knowledge they are well company intends to pursue the only surefire accepted.” Pissarra suggests that Asia and strategy for protecting its lead: “It is very oup http://biotec
South America could be ideal locations for difficult to tell in agricultural biotechnology bioinformatics are also expected to acceler- marketing biogenerics, because full-scale be.more than ten years’ time. It’s our inten- possibly driving older products into obsoles- tion to develop that technology that will be cence before their patents have expired.
lishing Gr
state of the art, rather than to focus on “Quite aside from any generic competition. .
.this is a time of scientific ferment, so you’ve got intense competition among innovators,” companies also enjoy strength in a lack of 2001 Nature Pub

Controlling Bacterial Diseases of Ornamentals Management of bacterial diseases relies upon the use of all available information on production of the crop as well as control of the pathogen. One of the most important pieces of information is what diseases occur on your crop. When you know the problems you might encounter on each crop it is easier to recognize their symptoms and apply control