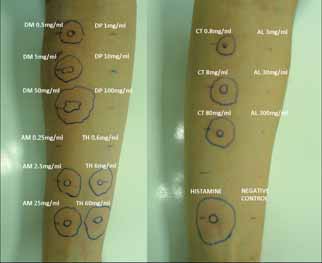 maleate at 4 mg/mL [Fenistil injectable solution, Novartis]), Anaphylaxis to Dimenhydrinate Caused by the
2 piperazines (cetirizine hydrochloride at 10 mg/mL [Zirtek Theophylline Component
tablet in normal saline, UCB] and levocetirizine dihydrochloride at 5mg/mL [Xozal tablet in normal saline, UCB]) and a piperidine (desloratadine at 5mg/mL [Aerius tablet in normal Allergy Department, Laikon General Hospital, Athens, Greece saline, Schering-Plough]). All were negative. To study the allergenic properties of the 2 compounds Key words: Anaphylaxis. Dimenhydrinate. Diphenhydramine. Drug we proceeded to perform SPTs with the pure substances (Figure). Interestingly, there was no reaction when we tested Palabras clave: Anafi laxia. Dimenhidrinato. Difenhidramina. diphenhydramine (1 mg/mL, 10 mg/mL, and 100mg/mL; powder provided by Recordati, Italy), as previously reported [3]. In contrast, all the theophylline-containing drugs tested were positive. Specifically, we tested anhydrous theophylline (0.6 mg/mL, 6 mg/mL, and 60mg/mL [Theodur tablet in normal saline, Lavipharm]), choline theophyllinate (0.8 mg/mL, Dimenhydrinate is an over-the-counter, widely used drug 8mg/mL, and 80 mg/mL [Choledyl syrup, Galenica]), and for motion sickness. It consists of 2 drugs: diphenhydramine, an aminophylline (0.25 mg/mL, 2.5 mg/mL, and 25 mg/mL ethanolamine, and 8-chlorotheophylline, a xanthine derivative [injectable solution, Cooper]). The results were increasingly that reduces the sedating properties of diphenhydramine. positive. Again, 5 healthy individuals tested negative. Of Allergic reactions to dimenhydrinate are rare and typically interest, SPTs for allopurinol (3 mg/mL, 30 mg/mL, and manifest as fi xed drug eruptions [1,2]. To our knowledge, no 300 mg/mL [Zylapour tablet in normal saline, Farmanic]), episodes of anaphylaxis have been reported. which is a structural isomer of hypoxanthine resembling Herein, we present the case of a 27-year-old woman who theophylline, were negative. It can be concluded thus that was admitted with sudden pruritic rash on the palms that rapidly the reactivity in our patient was specifi c to the theophylline progressed to the soles and the fl exural surface of the elbows. compound. Unfortunately, the patient refused to undergo Within 30 minutes, she developed emesis, diarrhea, and pain in a diagnostic oral drug challenge. Of note, previous reports the lower abdomen. The symptoms resolved without treatment on aminophylline reactivity have not been attributed to within an hour. Ten minutes prior to the onset of the rash, she had theophylline but rather to ethylenediamine, a well-known taken an antiemetic pill (50 mg dimenhydrinate) due to a planned car trip. She reported multiple intakes of dimenhydrinate in the past without any reaction. History was insignifi cant for other allergic disease, with no reports of atopic dermatitis, physical urticaria, or food or drug allergy.
Based on the concurrent manifestation of symptoms affecting the skin and the gastrointestinal tract together with the pain in the lower abdomen (attributed to uterine contractions), we considered the possibility of an anaphylactic reaction to dimenhydrinate and proceeded to perform skin prick tests (SPTs) with the suspected agent. The tests were performed with increasing concentrations (0.5 mg/mL, 5 mg/mL, and 50 mg/mL) of dimenhydrinate (Drimen tablet in normal saline, Coup); they were all positive with progressively increasing wheal and fl are reactions. The same tests performed in 5 healthy controls were negative, indicating no irritating effect of the drug. SPTs performed with a panel of food allergens (egg white, cow’s milk, wheat, and fi sh) and aeroallergens (grass mix, weed mix, Olea europea, Parietaria judaica, cat epithelia, and Dermatophagoides pteronyssinus) were all negative, confi rming the negative atopic profi le of the patient. The Figure. Skin prick tests, performed using the standard prick method, patient did not exhibit dermographism. To assess the specifi city for the various compounds. DM indicates dimenhydrinate; DP, of the reaction, we performed SPTs with 4 antihistamines of diphenhydramine; AM, aminophylline; TH, anhydrous theophylline; CT, different drug classes. We tested an alkylamine (dimetindene choline theophyllinate; and AL, allopurinol. J Investig Allergol Clin Immunol 2011; Vol. 21(4): 317-329 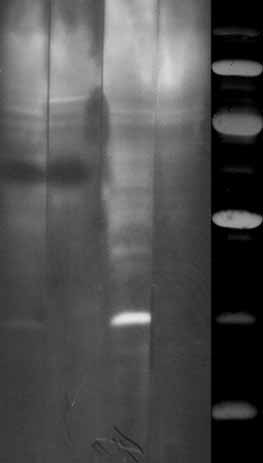 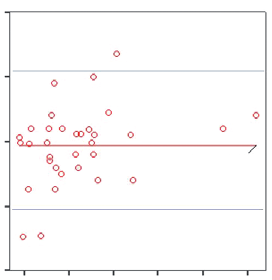 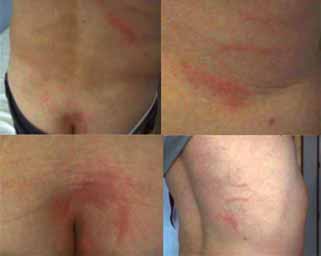 People before Patents. The Success Story of the Indian Pharmaceutical Industry The colonial patent law of 1911 secured the Indian market to British industry. A large majority of drugs were imported from abroad until the Patents Act 1970 brought a turnaround. Early in the 21st century India has a highly efficient pharmaceutical industry, blossoming thanks to the weak