70 | The Journal of One-Day Surgery | VOL 17 | No 3
Minimally-invasive Surgical
Repair of Ruptured Achilles
Tendon as a Day Case Procedure
with Early Full Weight Bearing
MAYUKH BHATTACHARYYA & BRUNO GERBER
The authors have received no funding from, nor have any other financial connection with, the manufacturer of the Achillon™ instrument guide. Keywords: New day surgery procedures; Orthopaedics; Emergencies
Abstract
We performed a non-randomised, prospective, sequential study in order to assess the potential of minimally invasive repair after rupture of the tendo Achillis as a short-stay surgical procedure with early weight-bearing The first group of 25 patients were hospitalised until the next available trauma list and then underwent a conventional open repair. The second group of 20 patients were treated with a temporary splint and admitted from home at the first available opportunity to be treated as a day case with a minimally-invasive technique using the Achillon™ instrument guide. Patients in the open repair group were not mobilised fully weight- bearing until eight weeks after surgical repair whereas the minimally-invasive group were allowed early Median postoperative hospitalisation was 3.3 days in the open group, whereas the minimally-invasive group were all discharged on the day of surgery. Patients undergoing open repair required postoperative analgesia for an average of seven days compared to two days in the minimally-invasive group. These patients also required opioid-based analgesia, whereas only paracetamol or ibuprofen were required in the minimally- Two cases of wound dehiscence requiring repeated debridement surgery and five cases of delayed wound healing occurred in the open repair group, none of whom had any predisposing factors. In contrast, the only case of delayed wound healing in the minimally-invasive group occurred in a patients with known HIV infection. Both groups showed an improved functional outcome after surgery but the minimally-invasive group demonstrated a functional benefit from early weight bearing mobilisation and same day discharge. This study suggests that minimally-invasive surgical repair with the Achillon™ instrument as a day case procedure and early weight-bearing mobilisation in an orthosis for accelerated rehabilitation might be adopted for all patients with rupture of the tendo Achillis. Immediate postoperative morbidity and analgesic requirements following surgical intervention have been Surgical treatment of acute rupture of the tendo Achillis is underreported. The potential of any method to offer favoured in the literature for younger patients1, 2. This
treatment as day surgery has also not been extensively condition typically affects young active adults and is advocated. The Achillon™ (Integra Lifesciences, Plainsboro, associated with prolonged periods off work and sporting New Jersey) is an adjustable polycarbonate instrument activity2. Surgical repair with percutaneous3 or limited
guide (Figure 1) which allows minimally-invasive repair of open technique1 had been reported with good to excellent
the Achilles tendon with direct visualisation and control of outcome compared to open operative treatment. The two the tendon stumps. We believe that repair with the main problems with operative intervention by open repair Achillon™ instrument on a semi-elective basis with early described in the literature are poor wound healing and delayed weight bearing following surgery2. This also has
significant health implications for the patients and Authors’ Addresses
represents a financial burden to the healthcare provider in MAYUKH BHATTACHARYYA Staff Orthopedic Surgeon BRUNO GERBER Consultant Orthopaedic Surgeon, terms of associated nursing and physiotherapy costs1. 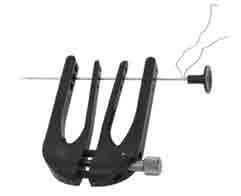 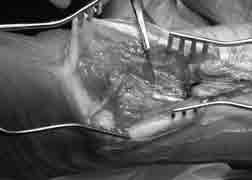 The Journal of One-Day Surgery | 71
Table 1 Inclusion and exclusion criteria for surgical
Inclusion Criteria
Exclusion Criteria
Figure 1 The Achillon™ instrument guide and needle driver. The metal
screw allows the polycarbonate guide to be adjusted so that the tendon lies comfortably between the two central branches.
weight bearing would reduce bed usage and facilitate faster patients received one dose of cefuroxime 15 minutes before rehabilitation for patients after a rupture of the tendo Achillis. Thus, in the present medico-political climate, it may provide less financial burden to the national health Conventional open surgical management
The first group of 25 patients were admitted direct from A&E and underwent surgery on the next available trauma We therefore prospectively studied two groups of patients list. These patients had a simple, open end-to-end repair of admitted to our institution and treated operatively for the tendon as an inpatient under instruction of the acute Achilles tendon rupture in order to compare bed admitting consultant. The Achilles tendon was repaired usage, wound complications and immobilisation regimen.
with delayed absorbable sutures through a medial In the first part of the study, patients who had been treated longitudinal incision approximately 10 cm long (Figure 2) by open surgery with delayed immobilisation for eight which was subsequently closed with nylon. The limb was weeks were assessed. In the second part, those treated by then placed in a temporary gravity equinus plaster the Achillon™ technique with immediate weight bearing overnight. All the patients received a nerve block with or without oral morphine as postoperative analgesia while an inpatient and subsequently received co-dydramol and The aim was to address the potential of any surgical ibuprofen after discharge. Patients were discharged when method which reduces hospitalisation and postoperative they were confident using crutches and the physiotherapist wound care costs with reduced requirements for postoperative analgesia, together with improved rehabilitation and return to normal activity for young patients (age below 45) with a rupture of the Achilles Preoperative assessment:
The patients were acquired from the accident and emergency (A&E) department of the University Hospital Lewisham between January 2003 and November 2005 with Achilles tendon rupture satisfying our inclusion criteria (Table 1). The diagnosis was made clinically by a palpable gap in the Achilles tendon with positive Thompson test.
None had any radiological investigation. All the patients were initially treated with analgesia and the application of Figure 2 Open repair of the Achilles tendon with delayed absorbable sutures
performed through a medial longitudinal incision.
a below-knee anterior cast adjusted in equinus position.
Patients subsequently underwent surgery, with all the The equinus position of the hind-foot was not changed for procedures performed, assisted or supervised by the main the first two weeks and patients were mobilised non- authors. All patients were operated on under general weight bearing. The position of the plaster cast or the anaesthesia in the prone position with a tourniquet. All number of heel raises in the orthosis was then reduced at 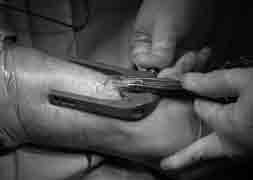 72 | The Journal of One-Day Surger
two-weekly intervals before being removed at eight weeks when full weight bearing was allowed. Rehabilitation exercises were performed sequentially under the supervision of a physiotherapist over the three months Minimally-invasive Achillon™ management.
The subsequent 20 patients had their repair as a limited open technique followed by immediate weight bearing.
After placing the temporary below-knee equinus splint in the A&E department, patients were sent home and asked to return on the morning of the consultant’s next operating day. All patients were operated on by a single consultant Figure 4 The postoperative
(BG). A 3 cm incision was made medial to the palpable gap in the Achilles tendon. The paratenon was identified after minimal localised soft tissue dissection, the torn tendon stump was identified and the Achillon™ instrument guide (Figure 3) was introduced as described by Assal et al1. Three
sutures were placed in both tendon stumps which were then tightened under direct visual control while placing the ankle into the equinus position The tendon sheath and skin were carefully closed; local anaesthesia was not used.
Patients in this group were placed back into the below- The average age of the patients was 36.8 years (range knee gravity equinus cast for the immediate postoperative 25–48). All had a closed rupture within 5–7 cm from period until a suitable orthosis was available, after which calcaneal tuberosity, a palpable gap in the tendon averaging they were mobilised with full weight bearing and were 38 mm (range 31–48 mm) and a positive Thompson test.
encouraged to move the ankle within the orthosis. They All patients had ruptured their tendon within the previous were prescribed paracetamol and ibuprofen as take-home seven days and all were non-professional athletes with a analgesia and discharged later the same day.
keen sporting interest. At time of injury they were participating in a pivot-sporting activity, such as badminton, tennis and basketball. The mean time interval between the injury and index operation was 3.6 days (range Five patients in the open surgery group were lost to follow- up, leaving 20 with complete data sets at one year for analysis. One patient with HIV did not attend the final one year assessment, but no other patients were lost to follow- up in the minimally-invasive group. The mean age of each group was similar, as were the ratios of right to left sided tendon ruptures. There were more men than women in The average operating time was 85.7 ±18 minutes (range 81–123) in the open group, compared to 38.5 ± 7.9 minutes Figure 3 The Achillon™ instrument in position in the prone patient in the
(range 27–58) in the minimally-invasive group. Average minimally-invasive group. The forceps hold the tendon stump prior to tourniquet time in the minimally-invasive group was 32 minutes (range 19–52 min). All patients in the open At the first follow-up, all wounds were assessed and surgical group were hospitalised before and after surgery sutures were removed. Patients were then clinically with a median postoperative hospital stay of 3.3 (range 2–5) reviewed every two weeks for eight weeks. The equinus days. No patients in the minimally-invasive were kept in position of the plaster or the number of heel raises in the hospital before surgery and all were discharged home on orthosis (Figure 4) was reduced at each visit until a plantigrade position of the ankle was achieved. The orthosis or plaster cast was removed at eight weeks. Each The number of days for which postoperative analgesia was patient in both groups was subsequently reviewed at three required was greater in the open group compared to the months, six months and one year. The primary outcome minimally-invasive group (mean 7 days versus 2 days).
measure was the time taken to return to normal activities, There was also a difference between the groups in the type as reported by the patient. Data relating to the return to of postoperative analgesia required, with opioid-based normal sporting activity, walking, stair climbing and work analgesia being used in the open repair group, whereas the minimally-invasive group reported adequate analgesia 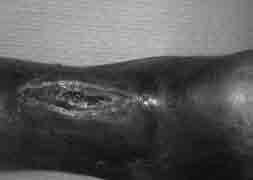 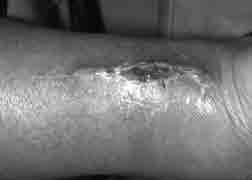 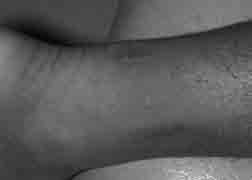 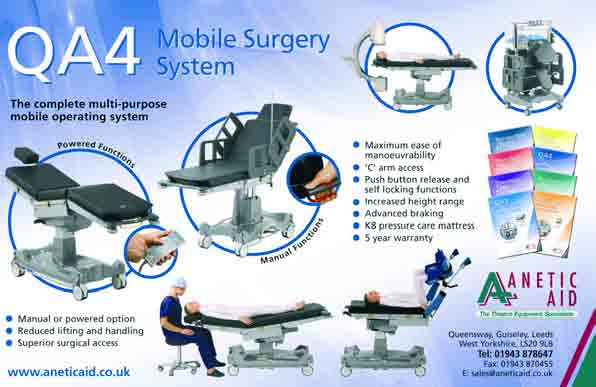