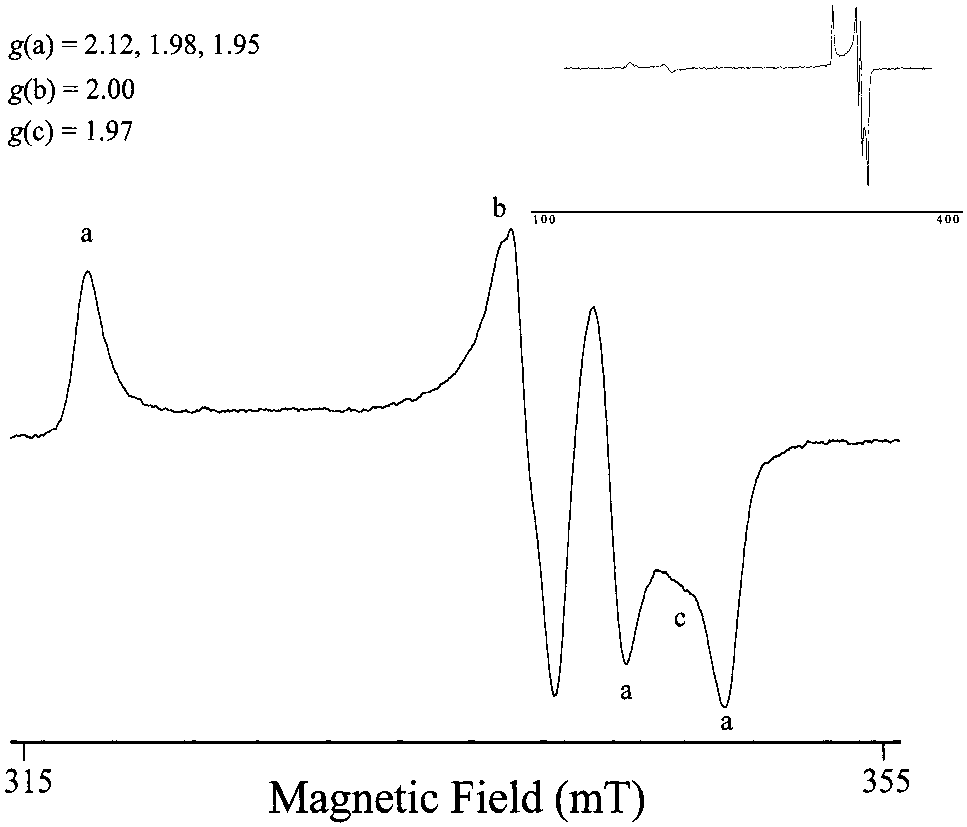 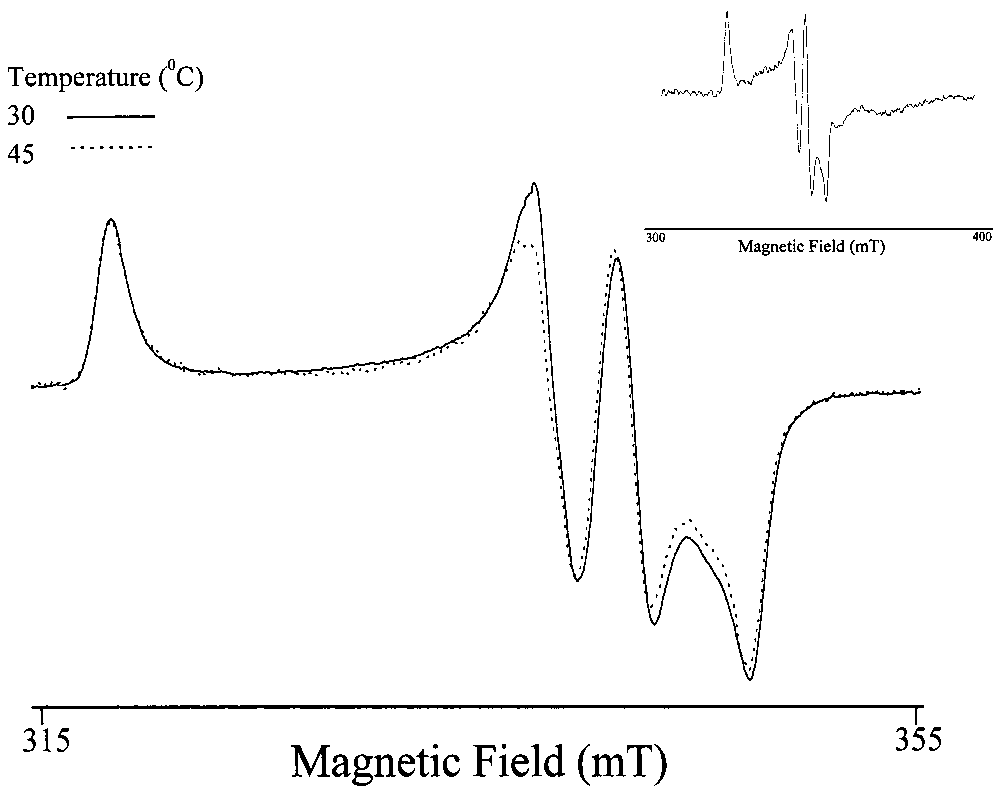 9458 J. Am. Chem. Soc., Vol. 121, No. 40, 1999 ) 2.12 inflection observed in 13C2H2 turnover samples is slightlybroader than that observed for C2H2 turnover samples (SupportingInformation). These data suggest the g 2.12 signal arises from anC2H2 adduct(s) bound to the FeMo-cofactor during enzymaticturnover.
While an acetylene-induced signal has not been reported previously, a weak axial S ) 1/2 signal (g ) [2.125, 2.000, 2.000];0.017 spins per cofactor) has been detected2 in turnover samplesof nitrogenase from Klebsiella pneumoniae in the presence ofethylene (1.0 atm; signal maximizes at 29 K and 20 mWmicrowave power). This signal is not observed in turnoversamples under identical conditions using either wild-type or R-H195Q nitrogenase from A. Vinelandii. However, reducing thetemperature to 4 K on the R-H195Q sample reveals a weak signal(Figure 2 insert) nearly identical with that observed in the presenceof acetylene (Figure 1), strongly suggesting that the g 2.12 signalarises from ethylene bound to the FeMo-cofactor.
The possible identity of the g 2.00 signal can be further refined.
If this signal arose from an intermediate radical of reduced Figure 2. The g-2 region of the EPR spectrum of enzymatic turnover
acetylene, the spin density would be localized on the carbon of for R-H195Q in the presence of acetylene after incubation at t ) 30 and45 °C, respectively. Experimental and spectrometer conditions are as the radical and a large isotope-induced change in the EPR signal described in Figure 1. Insert: The g-2 region of the EPR spectrum of would be expected with either 13C2H2 or C2D2. Only very small enzymatic turnover for R-H195Q in the presence of ethylene (1.0 atm).
changes are observed (Table 1) which may originate from changes Experimental and spectrometer conditions are as described in Figure 1.
in the underlying g 2.12 signal. In summary, the results suggestthat the g 2.12 signal arises from C2H4 bound at the FeMo-cofactor Substrate Isotope Effects on the Line Widths of while the g 2.00 signal is most associated with either an amino acid or homocitrate radical species that is generated during All three signals are observed at C2H2 concentrations as low as 0.001 atm and the amplitude ratio of the individual inflections remain unchanged. In other words, there are no hi-/lo-C analogous to the aforementioned hi-CO and lo-CO CO signals.
A plot of signal amplitude vs C2H2 at low concentrations results studies (results not shown) further demonstrate that the shoulder in a sigmoidal curve suggesting cooperative binding of more than at g ) 1.97 shows behavior that is drastically different from the one C2H2. This is consistent with the works of Davis et al.3 and other signals. These results indicate that there are at least three Shen et al.,14 who have provided evidence for more than one C2H2 different signals present in the g-2 region. The first (termed g binding site within the MoFe protein. Finally, similar to the 2.12) is a rhombic signal with g ) [2.12, 1.98, 1.95]. Large formation of hi-CO under low flux conditions,15 all three deviation from the g-factor of the free electron (g ) 2.0023) is acetylene-induced EPR signals appear at low electron flux.
characteristic of an unpaired electron on a transition metal or metal Increasing the component ratio resulted in an overall increase in cluster leading to significant spin-orbit coupling. Because the the final amplitude of the EPR signals without a major change in substituted amino acid is located within hydrogen-bonding the amplitude ratios of the individual inflection. Thus, the three distance of the cofactor the g 2.12 signal most likely originates species contributing to the spectrum in Figure 1 are simultaneously generated in approximately the same ratio regardless of substrate The second signal (termed g 2.00) is narrow, nearly isotropic concentration or electron flux suggesting that one of the species with g ) 2.00, characteristic of radicals which exhibit small g is not a mechanistic precursor of another.
anisotropy due to minor spin-orbit coupling. The presence of In summary, strong EPR signals, including a radical signal, this signal is significant because it is the first observation of a are elicited from an altered form of the nitrogenase MoFe protein radical in a nitrogenase turnover sample. There are three pos- when incubated under turnover conditions in the presence of C2H2.
sibilities for the origin of the radical species: (1) a C2H2 reduction The identification of such signals under these conditions is an intermediate, (2) an amino acid, perhaps one that is located along important advance in our attempt to determine where and how the electron-transfer path between the Fe protein docking site and substrates become bound to the active site during nitrogenase the FeMo-cofactor, and (3) the homocitrate molecule that provides turnover, and to determine how the FeMo-cofactor polypeptide the bidentate ligands to the Mo atom of the FeMo-cofactor. The environment contributes to that process.
third signal in Figure 1 is a minor shoulder at g ) 1.97. Theorigin of this inflection is not clear and will not be further Acknowledgment.
9630127; D.R.D.) and USDA (96-35305-3730; B.J.H.) for support. We To investigate the possible association of C2H2 with either of also thank the Pennington Biomedical Research Center (Baton Rouge) the first two signals, turnover samples were prepared with 13C2H2 for the use of their EPR spectrometer.
or C2D2 as substrate. The line widths of individual inflectionsare listed in Table 1 and reveal small yet reproducible isotope Supporting Information Available: Figure 3 showing the g ) 2.12
effects. An overall general trend is evident; the line widths of inflection of enzymatic turnover for R-H195Q (PDF). This material is the g 2.12 signal (i.e., g ) 1.98 inflection) observed in C2D2 available free of charge via the Internet at http://pubs.acs.org.
turnover samples is narrower than what is observed for C2H2 turnover samples. Since the magnetogyric ratio for a deuteron issmaller (∼1/6) than for a proton, the EPR signals from species (14) Shen, J.; Dean, D. R.; Newton, W. E. Biochemistry 1997, 36, 4884-
containing C2D2 adducts should be narrower than when C2H2 is the substrate. This result is consistent with a broadening of the g (15) Cameron, L. M.; Hales, B. J. Biochemistry 1998, 37, 9449-9456.