RAPID COMMUNICATIONS IN MASS SPECTROMETRYRapid Commun. Mass Spectrom. 2002; 16: 2075±2082Published online in Wiley InterScience (www.interscience.wiley.com). DOI: 10.1002/rcm.828 Electrospray ionization tandem mass spectrometric study of the aconitines in the roots of aconite Yong Wang, Zhiqiang Liu, Fengrui Song and Shuying Liu*
The New Drug Laboratory of the Changchun Institute of Applied Chemistry, Changchun 130022, P. R. China
Fragmentation pathways of aconitine-type alkaloids were investigated by electrospray ionization/ion trap multistage tandem mass spectrometry. Low-energy collision-induced dissociation ofprotonated aconitines follows a dominant first step, the elimination of the C8-substituent as aceticacid or fatty acid in MS2 spectra. Successive losses of 1±4 CH3OH molecules, 1±3 H2O, CO, benzoicacid, and CH3 or C2H5 (N-substituents) are all fragmentation pathways observed in MS3 and MS4spectra. By applying knowledge of these fragmentation pathways to the aconitines in the ethanolicextract of aconite roots, all the known aconitines were detected and also 23 unknown aconitine-typealkaloids, in which the lipo-alkaloids containing residues of 15C, 17C and 19C saturated orunsaturated fatty acids were characterized. These odd-carbon-number fatty acid substituents havenot been reported previously. Copyright # 2002 John Wiley & Sons, Ltd.
Roots of Aconite (Aconitum Carmichaeli Debx.) provide one of teristics. Then some unknown minor lipo-alkaloids in the the most useful herbal medicines in China. Aconitine-type crude extract of aconite are characterized, based on these alkaloids isolated from aconite have been shown to have potential toxicity and wide bioactivity. Mass spectrometry(MS) methods, particularly with the development of softionization techniques, such as electrospray (ESI) and matrix- assisted laser desorption/ionization (MALDI), have played an important role in the characterization of isolated Roots of aconite were purchased from a drug store.
aconitines,2±4 the quantitative analysis and the stereo- Authentic samples of aconitine (AC), hypaconitine (HC) chemistry of aconitines,5±7 and the direct analysis of and mesaconitine (MA) were purchased from China Drug aconitine mixtures. In previous work from this laboratory, and Biological Products Inspection Institute. AC, HC and both ESI and MALDI-MS were applied to analyze complex MA were dissolved in chloroform to obtain a solution of mixtures of alkaloids from aconite.8,9 However, to our concentration of approx. 0.5 mg/mL. 8-Ole-14-benzoylmesa- knowledge, no reports have appeared in the literature on conine and other lipo-alkaloids were synthesized using the the application of ESI-MS to determine the fragmentation procedure reported by Pelletier et al.11 Aconitum alkaloids in mechanisms of aconitines and their relationship to molecular aconite were extracted with ethanol for 48 h at room structure. The fragmentation pathways under low-energy temperature, and were then analyzed by ESI-MSn.
collision-induced dissociation (CID) conditions are still notsufficiently clear to assist characterization of unknown aconitine-type alkaloids in aconite extracts.
All experiments were performed using an LCQ ion trap All aconitines share a common C19-norditerpenoid skele- mass spectrometer (ThertmoFinnigan, San Jose, CA, USA) ton. Traditionally, aconitines in crude aconite can be divided equipped with an electrospray source and capable of into two main types according to the substituent at position 8 analyzing ions up to m/z 2000. The spray voltage was of the norditerpenoid skeleton: diester-diterpenoid aconi- 4.5 kV in the positive ion mode. The capillary voltage was tines (DDAs), in which the C8 position is occupied by an fixed at 5.0 V and capillary temperature was set 200°C.
acetyl group, and lipo-alkaloids, in which the C8 position is Sample solutions were infused at 3 mL/min via a syringe occupied by a fatty acid acyl group.10 The other structural pump. Collision energies for the MSn analyses ranged from variations lie in the substituents on the C3, C10 and N atoms 25±42% of maximum, depending on the mass of the (Table 1). In this study we investigate the fragmentation precursor ion; the isolation width was 2 Th.
pathways of protonated aconitines and derive the relation-ship between fragmentation behavior and structural charac- *Correspondence to: S. Liu, The New Drug Laboratory of the ESI-MS analysis of ethanolic extract of aconite Changchun Institute of Applied Chemistry, Changchun 130022, Figure 1 shows an ESI mass spectrum of the mixture of Copyright # 2002 John Wiley & Sons, Ltd. 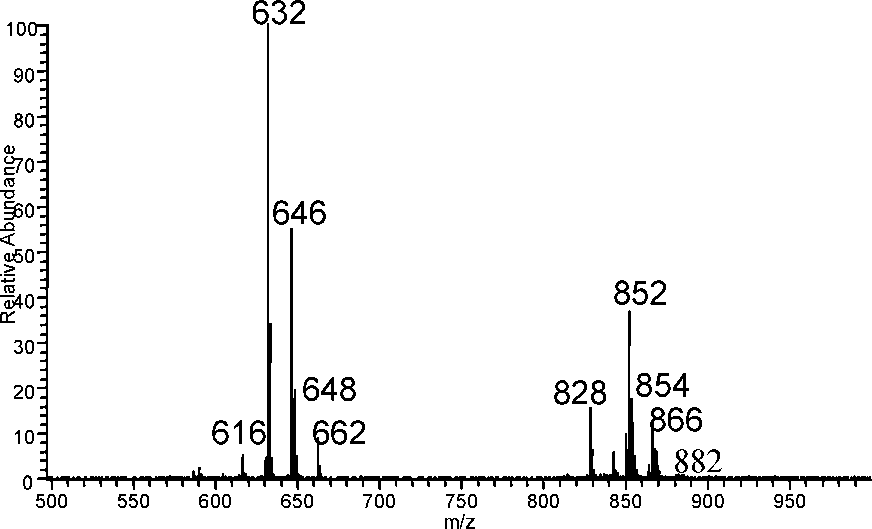 Table 1. Structures of some known aconitum alkaloids in aconite roots
If C8 acetyl is displaced by a palmitic, linoleic or oleic acyl group, the corresponding lipo-alkaloids will be formed: aconitines; the ions are observed in two regions, m/z 600±700 present work on fragmentations of the protonated DDAs.
and m/z 800±900. In the first region, the protonated molecules Table 1 shows that acetyl, benzoyl, methoxy and hydroxyl for known aconitines 1±5 were identified as m/z 616, 632, 630, groups are possible substituents on the skeleton for all 646, and 648, respectively. In addition, a peak corresponding DDAs, and therefore it is reasonable that neutral losses of 60, to 10-OH-aconitine (aconifine, AF) was clearly detected at 122, 32 and 18 Da should correspond to elimination of acetic m/z 662. In the region m/z 800±900, a set of MH ions acid, benzoic acid, methanol and water, respectively. The corresponding to lipo-alkaloids was observed, but their MS2 spectra of the [M  H] ions for DDAs 1±6 are further elucidation required MSn data.
summarized in Table 2, and are discussed as follows: (1) All fragment ions corresponding to [M  H-AcOH] provide the most abundant signals in the CID spectra, Schemes 1±3 summarize all the important findings of the indicating that C8 is an active site.
(2) In addition to [M  H-CH3OH] fragments, some very low-abundance peaks corresponding to [M  H-AcOH-CH3OH], [M  H-AcOH-CH3OH-CO] and [M  H- AcOH-2CH3OH], were also detected for all DDAs.
The formation of [M  H-AcOH-CH3OH-CO] sug- gested that the C=C bond resulting from elimination ofacetic acid could be assigned to positions 8 and 15 (seeScheme 4).
(3) For DDAs 3±6, whose C3 positions are all occupied by hydroxyl, three kinds of low-abundance fragment ions,corresponding to [M  H-H2O], [M  H-CH3OH- H2O] and [M  H-AcOH-CH3OH-H2O], were ob- served; these can be viewed as characteristic fragment Figure 1. ESI-MS of the extract from crude aconite roots.
ions for compounds with a C3 hydroxyl.
Copyright # 2002 John Wiley & Sons, Ltd.
Rapid Commun. Mass Spectrom. 2002; 16: 2075±2082 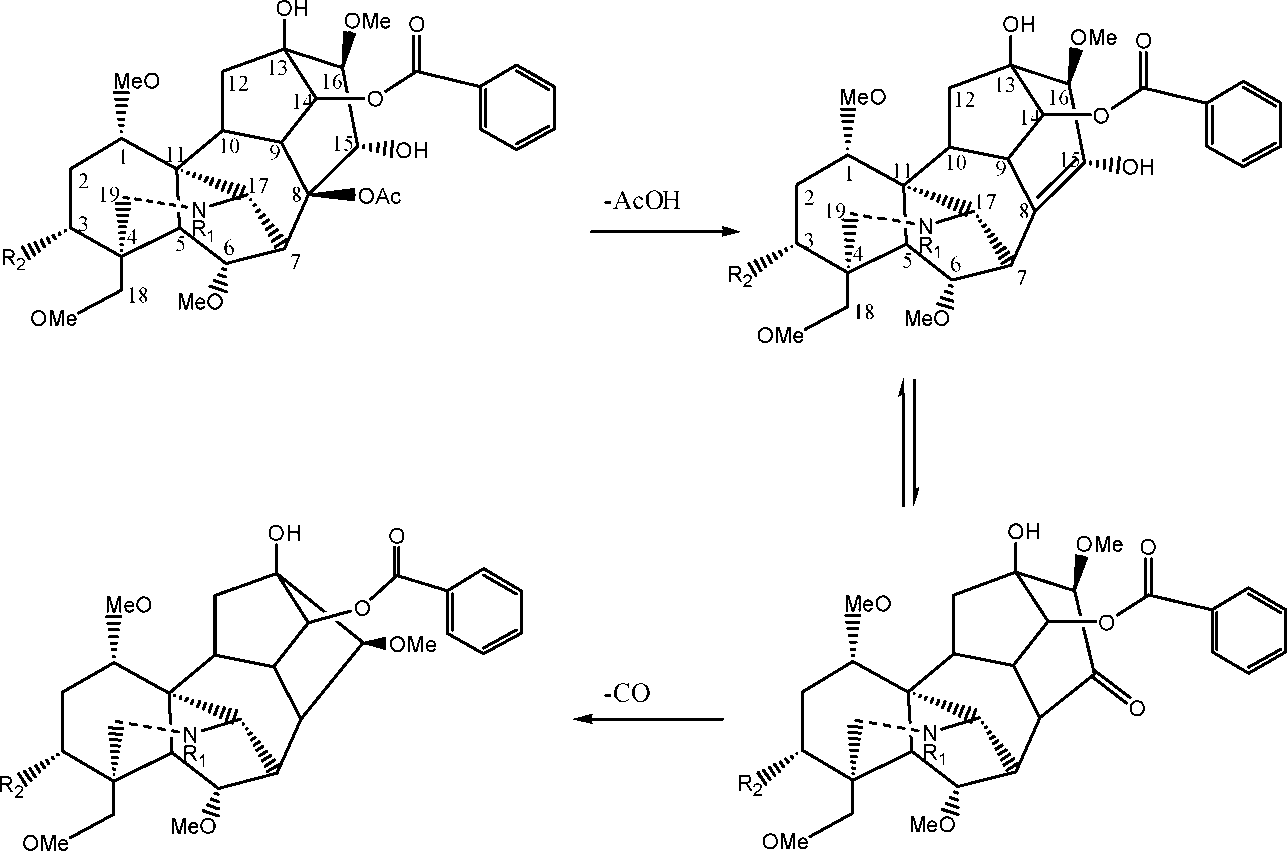 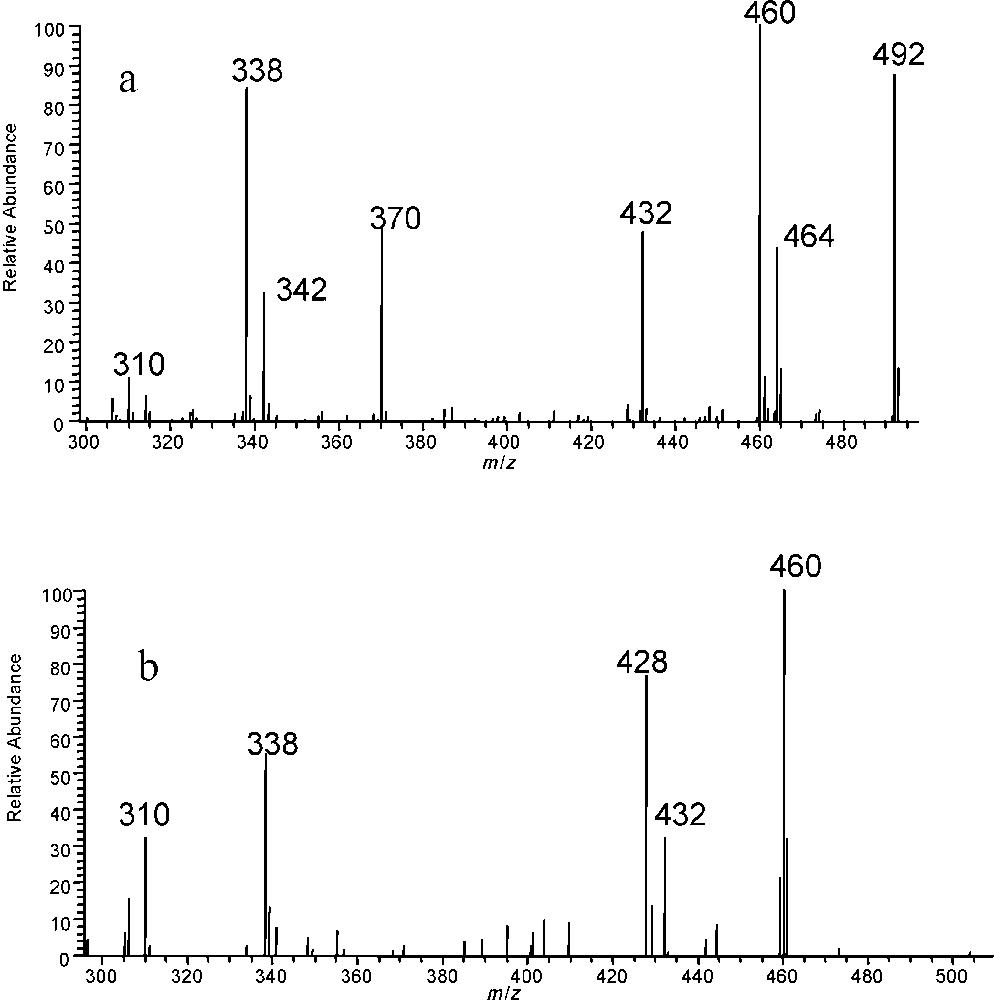 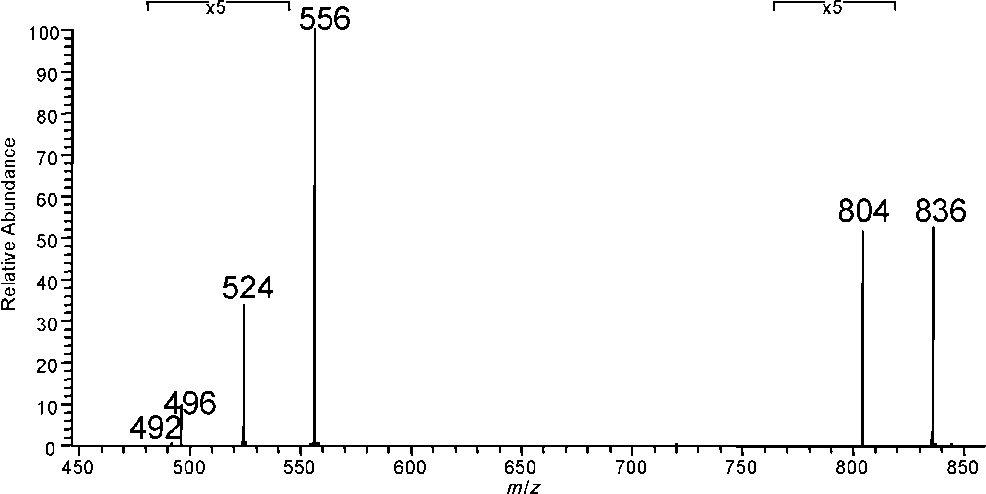 Table 5. MS4 spectra for the sequence [M  H]→[F1  H]→[F3  H]→X, where [F3  H] denotes the ion
[M  HÀAcOHÀ3CH3OHÀBzOH] for M = DDAs 1–6; CID 22%
AcOH-3CH3OH-BzOH], i.e. [F1  H-3CH3OH-BzOH], behavior varies reflecting structural differences. Proposed are listed in Table 5. Losses of CO and of CH3OH are fragmentation pathways for [HAH], [MAH] and common fragmentations in these MS4 experiments for all [BWH] are shown in Schemes 2, 3 and 4, respectively.
DDAs. The odd-integer ions at m/z 295 are important becausethey indicate loss of methyl or ethyl radicals from [F3  H] for M = HA or DA; this is followed by loss of a methanol to Three synthesized lipo-alkaloids, including 8-pal-benzoyl- generate a peak at m/z 263. For M = MA and AC, the mesaconine, 8-lino-benzoylhypaconine and 8-ole-benzoyl- distinctive reaction is loss of 44 Da, presumably CO2.
aconine, are used as examples to investigate the The above results summarize all fragmentation pathways fragmentation behavior of lipo-alkaloids in MS2 (Figs 3±5).
of DDAs under low-energy CID conditions. Elimination of The fragmentation pathways of these lipo-alkaloids are the acetic acid is the characteristic loss in MS2 for DDAs 1±6, same as those of the corresponding acetyl compounds MA, accompanied by losses of CH3OH and CO. Successive losses HA and AC, except for the loss of fatty acid (256, 280, 282 Da) of CH3OH, CO, BzOH, H2O and CH3 (N) or C2H5 (N) rather than loss of acetic acid. It is thus understandable that occurred in MS3 and MS4; some minor fragmentation MS3-MS4 spectra of all fragment ions are identical with thecorresponding ions as those from the DDAs (data notshown), as summarized in Scheme 1.
ESI-MS2 for lipo-alkaloids in the extract of The MS/MS spectra of unknown lipo-alkaloids in the aconiteextract showed interesting features compared with those ofknown lipo-alkaloids in the following two aspects: (1) More abundant fragment ions corresponding to elimina- tion of fatty acid were observed for the [M  H] ion. Forexample, CID of m/z 866 (Fig. 1) produced two majorproduct ions at m/z 586 and 572 (Fig. 6). This is Figure 3. MS2 spectrum on m/z 828 [8-pal-
unexpected, as we have demonstrated above that the ion at m/z 572 should not be generated from 8-lino-benzoylaconine. The most likely simple interpretation isthat nonadecadienoic acid (MW 294 Da) was eliminated Figure 4. MS2 spectrum on m/z 836 [8-lino-
Figure 5. MS2 spectrum on m/z 868 [8-ole-
Copyright # 2002 John Wiley & Sons, Ltd.
Rapid Commun. Mass Spectrom. 2002; 16: 2075±2082

benzoylmesaconine, respectively (here pdc and pal denote pentadecanoic and palmitic acid, respectively).
The MS2 spectrum of m/z 868 (Fig. 8) contains three major The ESI-MSn (n = 2±4) study suggested that the neutral loss fragment ions at m/z 588, 586 and 572, indicating losses of of acetic acid or long-chain fatty acid is the major 280, 282 and 312 Da, respectively, suggesting the pre- fragmentation channel in MS2 for protonated aconitines.
sence of 8-lino-10-OH-benzoylaconine, 8-ole-benzoylaco- Further successive losses of CH3OH, H2O, CO, BzOH, and nine and 8-arac-benzoylmesaconine, respectively (here CH3 (N) or C2H5 (N) account for all fragmentation pathways lino, ole and arac denote linoleic, oleic and arachidonic in MS3 and MS4. The structural changes involving C3-OH, C10-OH and N-CH3 or N-C2H5 can be reflected markedly in (2) MS/MS also permits identification of minor components ESI-MSn behavior. Based on these characteristics, ESI-MSn of aconitine mixtures that may not be readily detected provides a rapid and sensitive method for the direct analysis from the ESI mass spectrum (Fig. 1) alone. For example, of aconitine mixtures in the roots of aconite without the need the signals at m/z 882 and 826 are very weak in Fig. 1, and for chromatographic separation or derivatization; this the MS2 spectra of these ions are shown in Figs 9 and 10, advantage is most evident for differentiating the lipo- respectively. As shown in Fig. 9, m/z 882 produced three alkaloids with isobaric [M  H] ions. Besides the pre- main product ions at m/z 602, 586 and 572, corresponding viously known lipo-alkaloids, a series of unknown lipo- to losses of 280, 296 and 310 Da, respectively, suggesting alkaloids were characterized, in which the lipo-alkaloids that m/z 882 was composed of three different protonated containing odd-carbon-number fatty acid residues, and lipo-alkaloids: 8-lino-10-OH-benzoylaconine, 8-ndn- those containing 10-OH-MA or 10-OH-AC moieties, are benzoylaconine and 8-ecn-benzoylmesaconine (lino, reported to be present in this plant for the first time.
ndn, ecn denote linolenic, nonadecenoic and eicosenoicacid, respectively). To our knowledge, this is the first report of lipo-alkaloids containing 10-OH-AC and 10- The work is supported by the National Natural Science OH-MA in aconite. In the MS2 spectrum of m/z 826 (Fig.
10), four lipo-alkaloids, 8-pdc-benzoylaconine, 8-pme-benzoylmesaconine, 8-pal-benzoyldeoxyaconine and 8- hdc-benzoylhypaconine, are proposed due to observa- 1. Angela A. Prog. Neurobiol. 1998; 56: 211.
tion of the fragment ions at m/z 586, 572, 570 and 556, 2. Sayed HM, Desai HK, Ross SA. J. Nat. Prod. 1992; 55: 1595.
respectively (here pdc, pme, pal, and dc denote penta- 3. Chen Y, Koelliker S, Oehme M, Katz A. J. Nat. Prod. 1999; 62: decanoic, palmitoleic, palmitic and heptadecanoic acid, respectively). All lipo-alkaloids observed here are ar- 4. Wang FP, Li ZB, Wang JZ. Acta Chim. Sinica (in Chinese) ranged in Table 6 in groups that fragment by expelling a 5. Ito K, Ohyama Y, Hishinuma T. Planta Med. 1996; 62: 57.
fatty acid to yield the same product ion, i.e., the same 6. Ohta H, Seto Y, Tsunoda N. J. Chromatogr. B 1998; 714: 215.
7. Wada K, Mori T, Kawahara N. J. Mass Spectrom. 2000; 35: 435.
protonated DDA. The observation of lipo-alkaloids in 8. Sun WX, Liu SY, Liu ZQ, Song FR, Fang SP. Rapid Commun.
which C8 is occupied by a 15C, 17C or 19C saturated or unsaturated fatty acid residue is the most significant 9. Sun WX, Song FR, Cui M, Liu SY. Planta Med. 1999; 65: 432.
finding of this study, and has not been demonstrated 10. Kitagawa I, Yoshikawa M, Chen ZL, Kobayashi K. Chem.
11. Bai Yl, Desai HK, Pelletier SW. J. Nat. Prod. 1994; 57: 963.
Copyright # 2002 John Wiley & Sons, Ltd.
Rapid Commun. Mass Spectrom. 2002; 16: 2075±2082

How do I know whether I am at risk of having thyroid The thyroid is a butterfly-shaped gland, about the hormonal imbalance and how can it be diagnosed?size of two thumbs, located in front of the High or low thyroid hormone levels can be easily diagnosed through a blood test. windpipe. Its main function is to produce, store