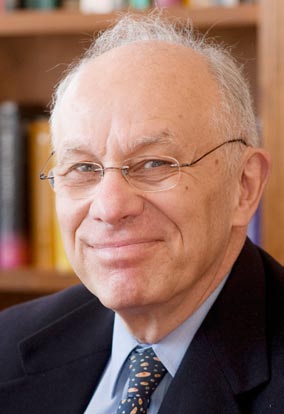 Herbert Meltzer and Clozapine
Making a Revolution in the Treatment
of Schizophrenia
Herbert Meltzer recalls that as a doctor-in-training, in the 1960s, “within my first week on the psychiatry ward, I knew what I wanted to do for the rest of my life.” His decision to devote himself to trying to improve the understanding and treatment of mental illness, and to personally treat patients with mental illness, resolved a question he had been pondering as to whether to pursue a career in clinical medicine or research. He did both. Shuttling between clinic and lab, he became, in the words of a colleague, “the driving force behind a revolution in the treatment of schizophrenia.” Now the Bixler/May/Johnson Professor of Psychiatry and professor of pharmacology at the Vanderbilt University School of Medicine, Dr. Meltzer is considered the world’s foremost authority on atypical antipsychotic drugs. Antipsychotic drugs treat the psychotic symptoms, the delusions and hallucinations, of schizophrenia. The so-called typical antipsychotics, in use for many years, are effective for the majority of patients. The atypicals, developed later, have offered rescue and respite to the 30 percent whose psychosis previously had been untreatable. These drugs were first called atypical because they are much less likely to induce the motor disturbances, the uncontrollable jerking and facial tics, that can occur with typical antipsychotics. NARSAD has been an essential participant in Dr. Meltzer’s story — and that of the development of atypical antipsychotic medications. The seed money for his early research was a NARSAD Distinguished Investigator grant, one of four he has received, including the latest, in 2007, for pilot studies on genes involved in schizophrenia. The story of Dr. Meltzer and clozapine exemplifies both the purpose and impact of NARSAD research funding: to provide the finest investigators the means with which to test bold but risky ideas that, when successful, have the potential to reshape entire fields and subfields of neuropsychiatric theory and clinical practice. Neurotransmitters: Delving Into “An Impenetrable Morass”
A prime instance was the validation for clinical use of the first atypical antipsychotic drug, clozapine, which emerged from Dr. Meltzer’s investigations, funded in part by NARSAD grants. To learn how clozapine worked and establish its efficacy, he delved into pharmacology that until then, he says, had been considered ”an impenetrable morass.” Neurotransmitters are the chemical conveyers of brain-cell communication. The neuro-transmitter dopamine performs different functions in different regions of the brain. Like other neurotransmitters, it delivers its messages via receptor molecules on the receiving cell. When Breakthroughs How NARSAD Research Has Led to Results, and Results Are Leading to Cures

Dr. Meltzer began studying clozapine, overproduction of dopamine was believed to be a factor in schizophrenia. This belief was supported by the fact that typical antipsychotic medications, drugs like Haldol — which were successful in many patients — prevented receptors from Clozapine, Dr. Meltzer concluded, was not a sufficiently strong dopamine blocker to explain its efficacy. Its weak dopamine receptor blockade could explain the lack of motor-disturbance side effects, he reasoned. But what could explain its exceptional effectiveness as an antipsy- chotic, as confirmed in the landmark study he led, which earned him NARSAD’s Lieber Prize for Outstanding Achievement in Schizophrenia Research? This study led to the drug’s approval by the U.S. Food and Drug Administration (FDA) in 1989 and its widespread usage through- But how did it work? Dr. Meltzer had a hunch that another neurotransmitter, serotonin, was involved. It turned out to be a good guess. His research revealed that clozapine binds strongly to certain serotonin receptors, specifically the type involved in hallucinations produced by drugs like LSD and the regulation of the activity of brain neurons essential to attention, learning, memory and the processing of sensory information. These are almost always abnormal in patients with schizophrenia. The “key factor,” as he would discover, was the ratio (sometimes referred to as the Meltzer ratio) of clozapine’s effect on these serotonin and dopamine neurons: strongly blocking the response of that specific receptor to serotonin released in the cortex and other regions of the brain, while only weakly blocking dopamine neurons involved in psychosis. The serotonin-dopamine hypothesis led to the development of a series of other atypical antipsy-chotics, including Risperdal, Zyprexa, Seroquel, Geodon and Abilify, now used by tens of millions of people. Dr. Meltzer’s subsequent observation that clozapine reduced suicidal thinking and behavior — a risk for up to half of schizophrenia patients — led to it becoming the only drug approved by the FDA as a suicide preventive for schizophrenia. Many thousands of lives may have been saved by this research. In his most recent research, Dr. Meltzer has found that adding a potent blocker of serotonin receptors to what would be sub-therapeutic doses of atypical antipsychotic drugs can restore full activity, speed up response and produce far fewer side effects, such as weight gain. He believes this will be ”a paradigm-shifting treatment approach” that can be applied to most if not all of the atypical antipsychotic drugs. Herbert Meltzer
The symptoms of psychosis in patients with schizophrenia are distressing. Yet, Dr. Meltzer explains, it is the effect on cognition — on the ability to reason, plan, remember — that ultimately determines quality of life and degree of functioning. In the clinic, treating patients with clozapine, Dr. Meltzer got the impression some of their cognitive functions were improving. Psychological tests seemed to confirm this, but the idea was met with considerable skepticism. So he “went back to the lab” to try to understand why.
Complementing clozapine’s mild blocking effect on dopamine receptors in brain areas associated with psychosis, he discovered that in the cortex and hippocampus of experimental animals clozapine and all other serotonin-dopamine antagonists with the right ratio, boosted the release of dopamine and of acetylcholine, which like dopamine is a key neurotransmitter for learning, memory, decision making and other cognitive processes. Typical antipsychotic drugs did not “We showed have this effect. The finding was “galvanizing,” Dr. Meltzer says. “We demonstrated for the first time that the cognitive impairment in many patients with schizophrenia was not completely irreversible.” This research stimulated an enormous effort to go beyond the benefits provided by the atypical antipsychotic drugs to improve cognition in schizophrenia. Currently, Dr. Meltzer is collaborating with pharmaceutical companies and mental health centers across the country and the world, working to improve the ability of antipsychotic drugs, impairment alone or in combination with other drugs, to enhance positive effects on cognition and minimize unwanted side effects such as weight gain, diabetes and dangerous lipid levels, and, most serious, a rare condition called agranulocytosis, which decimates white blood-cell count. patients with He adds that some of the drugs being tested may have potential for treating Alzheimer’s disease schizophrenia and Parkinson’s disease. Meltzer and NARSAD: Launching the Next Generation of Investigators
In 1991, Bryan Roth, who trained in psychiatry and molecular biology, applied for and received irreversible.” a Young Investigator grant to work with Dr. Meltzer, then at Case Western Reserve University. Together, they refined the serotonin-dopamine hypothesis and uncovered its complexity, identifying more than 50 subtypes of brain receptors to which clozapine binds. Today, Dr. Roth is professor of pharmacology at the University of North Carolina Chapel Hill Medical School and director of the National Institute of Mental Health Psychoactive Drug Screening Program. “Without that initial NARSAD support,” Dr. Roth says, “I wouldn’t be doing what I do. And the findings we made, that are accelerating drug discovery, would not have been made.” Stressing Dr. Meltzer’s role as a mentor, he says, “Herb has trained an entire generation, a virtual ‘Who’s Who’ of neuorpharmacologists.” Dr. Meltzer has been an important participant in NARSAD. A member of the Scientific Council since its inception in 1986, he oversees the selection of over 200 NARSAD Young Investigator awardees each year from among nearly a thousand applicants worldwide.
Beyond the lab and the clinic, Herbert Meltzer is an indefatigable campaigner to improve public understanding of neuroscience, speaking at NARSAD research symposia all over the country. When people ask him why progress on mental illness takes so long, he cites the brain’s complexity and the limitations of research funding. “But then,” he says, “I hammer home that without NARSAD it would take a lot longer.” ❖ Breakthroughs How NARSAD Research Has Led to Results, and Results Are Leading to Cures