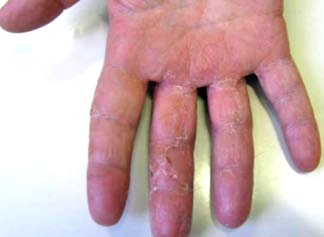 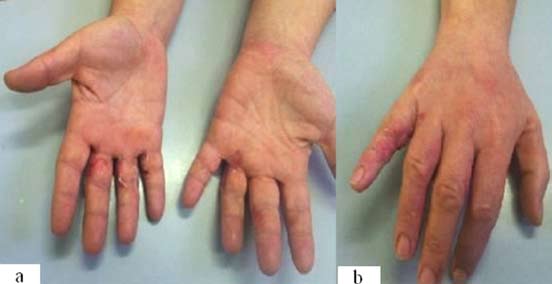 Fig. 2 a, b. Worsening of skin lesions after 15 days of oral alitretinoin 30 mg therapy.
the woman. The Patch test with European standard series develop chronic recalcitrant hand eczema (6). Retinoids and rubber series were negative at 72 and 96 hours reading are known to influence keratinization and inflammation, (D3 and D4), as well as investigations for latex sIgE and and acitretin has shown some effect in the treatment of aero and trofoallergens skin prick tests.
chronic hand eczema. Alitretinoin (9-cis-retinoic acid) The investigations serum chemistry, such as liver and is a panagonist retinoid binding to all six known retinoid thyroid function, lipid profile and β-HCG was required in receptors (RAR-α, -β, -γ and RXR-α, -β, -γ). Several stud- order to start systemic therapy with Alitretinoin, this was ies have been carried out with this new drug, and it has in the range of normality. So the patient was eligible and been shown to be effective in 28% to 89% of patients with then she started the treatment with oral alitretinoin 30 mg previously intractable hand eczema (7). Alitretinoin 30 mg once daily. 15 days later, we observed worsening skin le- taken once daily was well tolerated when taken for up to sions in our patient (Fig. 2 a-b). Then we stopped the drug 24 weeks and the AEs were typical class effects of oral for 2 weeks and we only treated the patient with systemic retinoids including headache, flushing and skin disorders. (metilprednisolone 16 mg/die for 1 week, 8 mg /die 7 days For example, Dirschka et al. (8) report the following AEs: next) and topical corticosteroids (hydrate calcipotriol / headache, mucocutaneous dryness, and three serious AEs: betamethasone dipropionate, repairing emulsion, resulting vertigo, furuncle and angioneurotic oedema after pharynx in an improvement in the hand dermatitis. We subsequently infection. The most common laboratory abnormalities restarted the oral alitretinoin at a dose of 10 mg once daily were increased serum cholesterol and triglycerides, with and this therapy resulted in a significant worsening of skin corresponding changes in high-density and low-density lesions, such as positive oral challenge test. In case of a pos- lipoprotein, and lowered levels of thyroid-stimulating sible active sensitization, we patch tested the patient with hormone. ToCCATA Diepgen et al. study (9) states specific molecules used during therapy.
headache as the most frequent AE, followed by increased So, a patch by patch these above cited molecules was blood triglycerides and increased blood cholesterol. Seri- performed and after 48 and 96 hours (D2 and D4) and one ous adverse drug reactions were documented in only four week. (D7) reading gave an alitretinoin positivity ++.
patients: lymphatic oedema, paranoia, recto-sigmoiditis For this reason it was decided to completely stop tak- ing alitretinoin and the woman undertook cyclosporin From what is seen in the literature no author has ever therapy at the dose of 5 mg/Kg/die resulting in disease reported cases of sensitization to alitretinoin. However, we present this as the first case of sensitization. In fact our The case has been referred to the Italian Agency for Drug – worsening of skin lesions after 30 mg once daily drug – an improvement of the disease after 2 weeks of alitreti- Discussion
– a worsening after drug re-administration such as positive CHE is a significant cause of morbidity both in the gen- eral population and in many categories of worker (4, 5). A – positive patch test with alitretinoin 100% 48 and 96 hours number of treatments are traditionally used, and are often effective, but in spite of this, a sizeable group of patients – negative results of all other allergological tests.
References
5. Usatine RP, Riojas M. Diagnosis and management of contact dermatitis. Am Fam Physician 2010; 82(3):249-55 1. oral alitretinoin. Severe chronic hand eczema: this retinoid 6. English J, Aldridge R, Gawkrodger DJ, et al.Consensus is too risky. Prescrire Int 2010; 19(106):62-3 statement on the management of chronic hand eczema. Clin 2. Ruzicka T. Alitretinoin induces complete response and can re-induce response in patients with severe CHE [oral presen- 7. Cheng C, Michaels J, Scheinfeld N. Alitretinoin: a compre- tation]. 17th Annual Congress of the European Academy of hensive review. Expert opin Investig Drugs 2008; 17(3):437- Dermatology and Venereology 2008; Sep 17-20; Paris 3. Ruzicka T, Lynde CW, Jemec GB, et al. Efficacy and safety 8. Dirschka T, Reich K, Bissonnette R, et al. An open-label study of oral alitretinoin (9-cis retinoic acid) in patients with severe assessing the safety and efficacy of alitretinoin in patients chronic hand eczema refractory to topical corticosteroids: with severe chronic hand eczema unresponsive to topical results of a randomized, double-blind, placebo-controlled, corticosteroids. Clin Exp Dermatol 2011; 36(2):149-54 multicentre trial. Br J Dermatol 2008; 158:808-17 9. Diepgen TL, Pfarr E, Zimmermann T. Efficacy and tolerabili- 4. Cvetkovski RS, Zachariae R, Jensen H, et al. Quality of life ty of alitretinoin for chronic hand eczema under daily practice and depression in a population of occupational hand eczema conditions: results of the ToCCATA open study comprising patients. Contact Dermatitis 2006; 54(2):106-11 680 patients. Acta Derm Venereol 2012; 92(3):251-5