Christoph E. Nabholz á Dave Speijer á AndreÂ Schneider Chloramphenicol-sensitive mitochondrial translationin Trypanosoma brucei Received: 30 January 1999 / Accepted: 17 February 1999 Abstract We developed an in organello system to label rRNAs among all eukaryotes and may therefore serve as newly synthesized mitochondrially encoded proteins of a system for investigation of the minimal requirements Trypanosoma brucei. Highly puri®ed mitochondria, for a protein synthesis machinery (Benne and Sloof prepared under isotonic conditions, were incubated with 1987). Third, unlike mitochondrial translation in most radioactive methionine and cysteine in a suitable trans- other species, mitochondrial protein synthesis in try- lation buer. Analysis of mitochondrial extracts on panosomatids relies exclusively on tRNAs that are im- TRIS-Tricine gels revealed a subset of labeled, NP-40- ported from the cytosol (Schneider 1994).
insoluble proteins. The labeling of these proteins was The problem of mitochondrial translation in trypan- resistant to the cytosol-speci®c translation inhibitor osomatids has proved to be dicult to analyze. Attempts cycloheximide. The proteins, however, were not labeled to purify mitochondrial ribosomes have been only par- in the presence of chloramphenicol or erythromycin, tially successful (Shu and GoÈringer 1998). Cytochrome c inhibitors of prokaryotic type translation, or puromycin, oxidase from Crithidia fasciculata has been puri®ed.
a general translation inhibitor. These results indicate However, all the putative mitochondrially encoded sub- that isotonically isolated mitochondria of T. brucei are units were refractory to protein sequencing (Speijer et al.
1996; Brekk et al. 1997). The best evidence for mito-chondrial translation was found in a number of studiesusing antibodies raised against synthetic peptides of pu-tative mitochondrially encoded proteins that detected signals of the expected molecular weights in the mito-chondrial fraction (Shaw et al. 1989; Beattie and Howton Mitochondrial translation in trypanosomatids is of great 1996). In addition, in organello labeling experiments in interest for at least three reasons. First, many RNAs C. fasciculata identi®ed a number of putative mito- that are synthesized in trypanosomatid mitochondria chondrially encoded proteins. However, no information undergo RNA editing by uridylate insertions and dele- was provided as to whether the observed translation was tions to become functional mRNAs. In recent years, sensitive to inhibition by prokaryotic type translation much has been learned concerning the mechanism of inhibitors (Tittawella 1998). In the present study we used RNA editing (Sollner-Webb 1996). However, nothing is an in organello labeling approach for direct demonstra- known about one important aspect of the problem, tion of mitochondrial translation in Trypanosoma brucei.
whether and, if so, how fully edited mRNAs are trans-lated within mitochondria. Second, mitochondrial ribo-somes of trypanosomatids contain the shortest known Procyclic wild-type and transformed Trypanosoma brucei, stock University of Fribourg, Institute of Zoology, PeÂrolles, 427, were grown in SDM-79 medium supplemented with 5% fetal e-mail: [email protected], Tel.: +41-26-300-8894,Fax: +41-26-300-9741 Protein Research Facility Amsterdam,E. C. Slater Instituut BioCentrum Amsterdam, Mitochondria were isolated using sterilized buers and equipment as described elsewhere (Hauser et al. 1996), except that a low-speed

spin (300 g) was routinely performed before loading of the Ny-codenz gradients. The absence of intact T. brucei cells and bacterialcontamination in isolated mitochondrial preparations was con-®rmed by light microscopy. In organello translations were per-formed using 400 lg of isolated mitochondria each in 100 ll oftranslation buer [20 mM TRIS-HCl (pH 7.4), 30 mM KH2PO4,0.6 M sorbitol, 5 mM succinate, 50 mM KCl, 20 mM MgSO4,12 mM creatine phosphate, creatine phosphokinase at 0.16 mg/ml,4 mM ATP, 0.5 mM GTP, 5 mM NADH, fatty-acid-free bovineserum albumin at 2.5 mg/ml, and 1 mM of all biological aminoacids except methionine and cysteine] containing 1 lM (approxi-mately 150 lCi) of a mixture of 35S-labeled methionine and cys-teine (Pro-mix, Amersham, Switzerland). The reactions wereincubated for 90 min at 25 °C, and mitochondria were reisolatedby centrifugation for 5 min at 5,200 g at 4 °C. The resulting pelletswere extracted with 100 ll of 50 mM potassium phosphate (pH7.5) containing 0.5% NP-40. Subsequently, the samples were cen-trifuged at 15,000 g for 15 min, and the pellet was solubilized underconstant mixing for 2 h at 37 °C in 50 ll of 0.28 M TRIS-HCl (pH6.8), 2.8% sodium dodecyl sulfate, 5% (v/v) glycerol, and 5% (v/v)b-mercaptoethanol. All reactions were analyzed on TRIS-Tricinegels (SchaÈgger and von Jagow 1987), which were ®rst stained withCoomassie brilliant blue to check for equal loading and then pro-cessed for ¯uorography.
In organello translation reactions were incubated in the presence Fig. 1 NP-40 extraction of mitochondria leads to enrichment of the or absence of cycloheximide at 100 lg/ml, at water-soluble chlor- ATPase complex. In all, 20 lg of total mitochondrial protein and amphenicol 50 lg/ml (Sigma, Switzerland), erythromycin at 10 lg of the 0.5% NP-40 pellet were analyzed with an antiserum 100 lg/ml, 1 mM puromycin, or a mixture of 2 lM valinomycin directed against the ATPase complex of C. fasciculata and iodinated and 50 lM carbonyl cyanide tri¯uoromethoxyphenylhydrazone protein A. The antiserum recognized two components (arrows) of the ATPase complex in T. brucei, both of which showed 3- to 5-foldenrichment in the NP-40 pellet puromycin, a tRNA analogue that blocks prokaryotic aswell as eukaryotic translation, is added, no labeled Mitochondria isolated by conventional hypotonic puri- ®cation procedures (Braly et al. 1974; Harris et al. 1990) Most importantly, incorporation of radioactivity into are not capable of synthesizing proteins in an in organ- respiratory complexes was sensitive to erythromycin and ello system (data not shown). We therefore used mito- chloramphenicol, which have been shown in other sys- chondria isolated under isotonic conditions using tems to inhibit mitochondrial and prokaryotic transla- nitrogen cavitation followed by Nycodenz gradients.
tion only. Antibiotic inhibition studies are the most Mitochondria isolated by this method had previously powerful tools for the operational de®nition of mito- been shown to exhibit a membrane potential and to be chondrial translation. However, previous studies have capable of importing mitochondrial precursor proteins led to contradictory results and have been questioned (Hauser et al. 1996). Mitochondria were incubated un- because the permeability of the trypanosomatid cell der suitable buer conditions with radioactive methio- membrane has not been addressed (Laub-Kupersztejn nine and cysteine for 60 min at 27 °C. After incubation, and Thirion 1974; Kleisen and Borst 1975; Spithill et al.
mitochondria were extracted with 0.5% NP-40 and the 1981). These problems can be avoided by the use of labeled proteins were analyzed on TRIS-Tricine gels permeabilized cells or, as in the present study, by the use optimized to separate hydrophobic proteins (SchaÈgger of isolated organelles. Our results fully agree with the and von Jagow 1987). The respiratory complexes, which study of Shu and GoÈringer (1998) and extend it further, include practically all mitochondrially encoded proteins, showing that radioactivity is indeed incorporated into are relatively insoluble in 0.5% NP-40 and should proteins. In summary, the two studies ®rmly establish therefore be enriched in the pellet (Speijer et al. 1996).
that mitochondrial translation in trypanosomes, as in all The immunoblot depicted in Fig. 1 shows that the other eukaryotes, is sensitive to chloramphenicol.
ATPase complex is indeed enriched in the 0.5% NP-40 Surprisingly, choramphenicol sensitivity has not been pellet by a factor of 3±5. During the in organello assay, tested in a recent study on in organello translation in radioactive methionine and cysteine is incorporated into C. fasciculata (Tittawella 1998). A comparison of our a subset of distinct proteins found in the NP-40 pellet.
data with these experiments is therefore problematic; Labeling of the proteins is not altered in the presence of nevertheless, an apparently similar labeling pattern was cycloheximide, an inhibitor of translation in the eu- obtained. In our study, approximately 10±12 putative karyotic cytosol. This indicates that the observed label- mitochondrially encoded proteins were detected. The ing pattern was not due to cytosolic contamination or to apparent molecular weights of the main erythromycin- a small residual number of intact cells that might have and chloramphenicol-sensitive labeled proteins (aster- remained in the mitochondrial fraction. However, if isks in Figs. 1, 2) correspond to 17.8, 22.9, and 27 kDa, 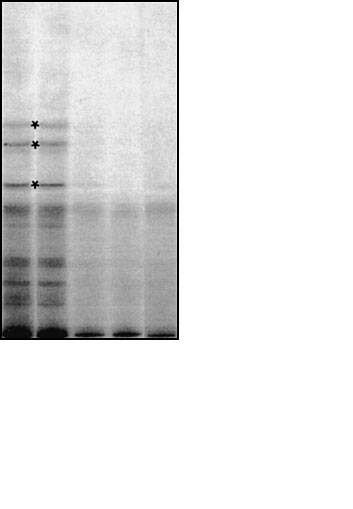 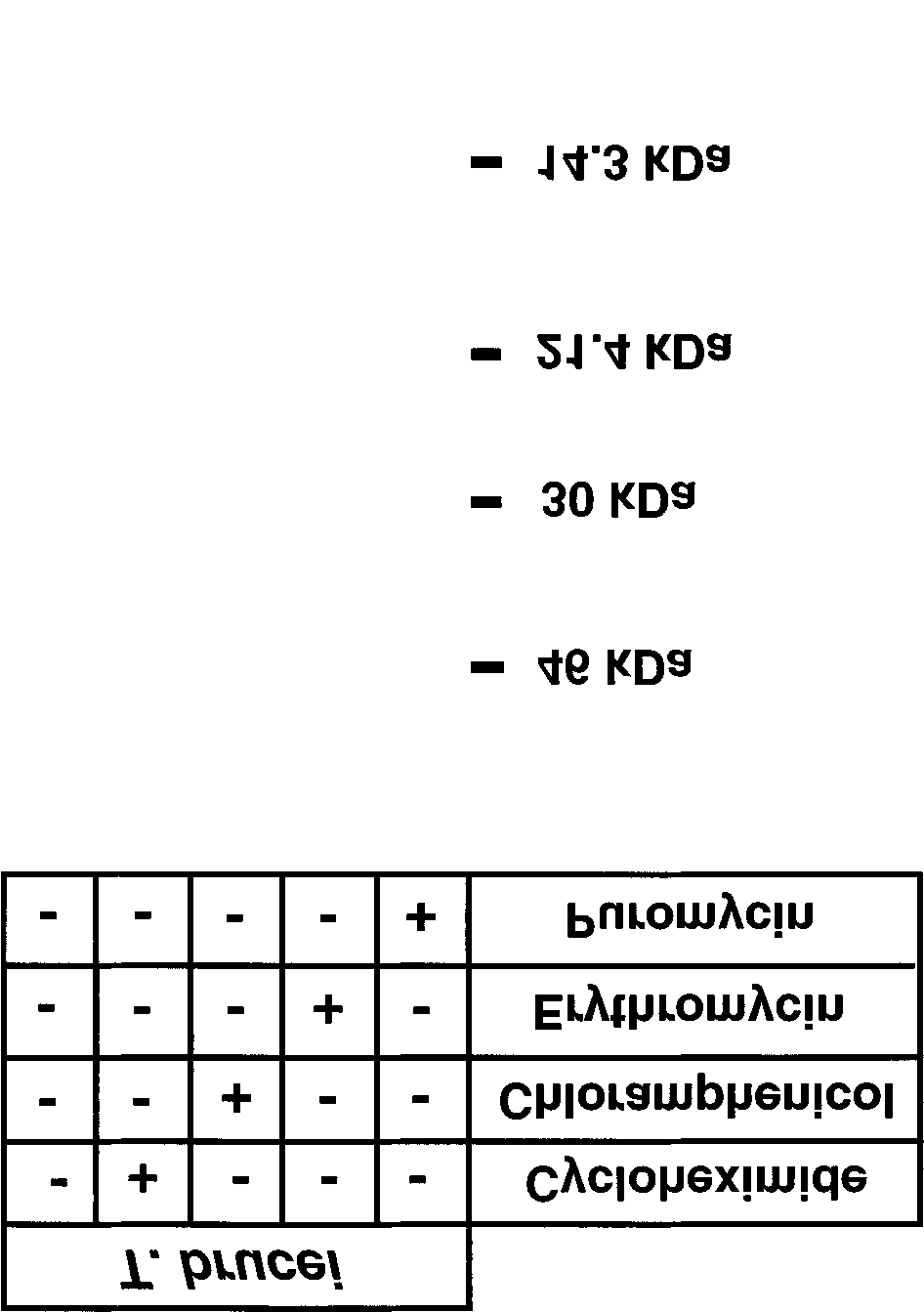 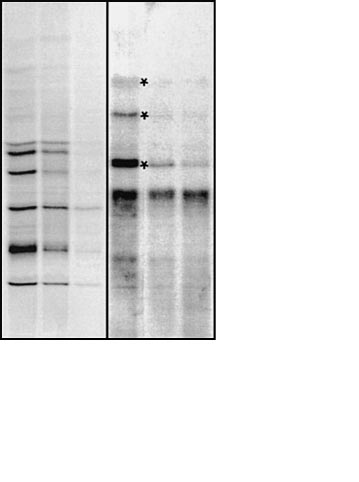 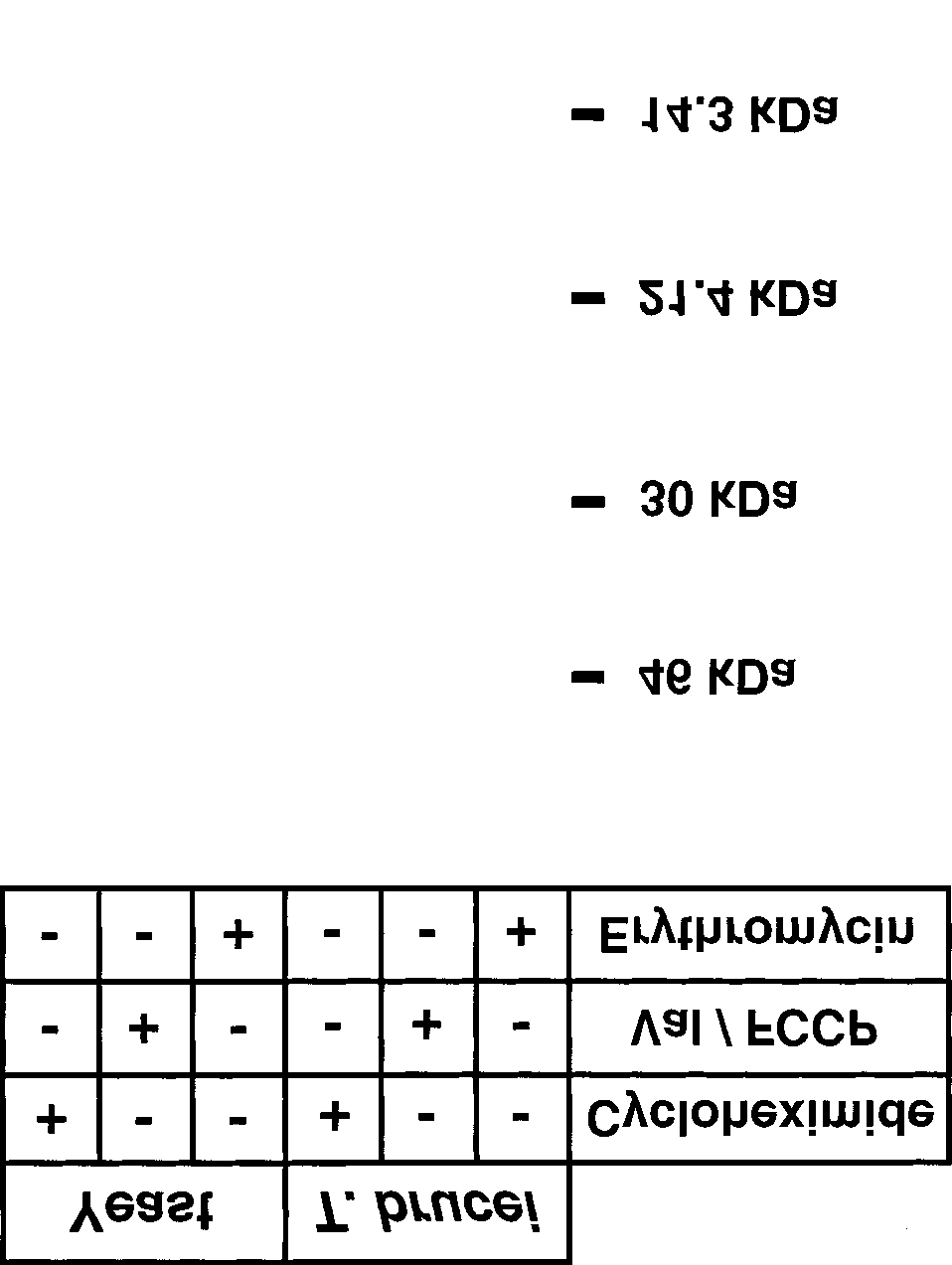 Fig. 3 Mitochondrial translation in S. cerevisiae and T. brucei arecomparable. Left panel: 20 lg of isolated yeast mitochondria was Fig. 2 Mitochondrial translation in T. brucei is sensitive to subjected to in organello labeling in the presence of cycloheximide, a prokaryotic type translation inhibitors. NP-40 pellets of in organello mixture of valinomycin and FCCP, or erythromycin and then labeling reactions performed in the absence or presence of analyzed on the same TRIS-Tricine gel. Right panel: same conditions cycloheximide, chloramphenicol, erythromycin, and puromycin were described above except that 200 lg of isolated trypanosomal analyzed on TRIS-Tricine gel. The positions of molecular-weight mitochondria was used in each labeling reaction and the samples markers are indicated on the right. The three main translation were subjected to 0.5% NP-40 extraction prior to the analysis. The products in mitochondria are indicated by asterisks three main translation products of T. brucei mitochondria areindicated by asterisks respectively, which lie within the range of several pro-teins predicted to be encoded in the mitochondrion of Acknowledgements We thank Elke Horn for her excellent techni- T. brucei. However, the present results do not allow their cal assistance, Rob Benne for his helpful discussions, and RolandPach for reading the manuscript. This work was supported by grant 31-46628.96 from the Swiss National Foundation and by a fel- Finally, in organello translation in trypanosomes and lowship awarded by the Prof. Dr. Max CloeÈtta Foundation to A. S.
in the yeast Saccharomyces cerevisiae was compared(Fig. 3). As expected, similar numbers of labeled pro-teins were found, which did not have exactly corre- sponding sizes in the two organisms. In both species,mitochondrial translation was sensitive to erythromycin.
Beattie DS, Howton MM (1996) The presence of rotnone-sensitive Finally, if the membrane potential was dissipated by NADH dehyrogenase in the long slender bloodstream and the valinomycin and FCCP, mitochondrial translation was procyclic forms of Trypanosoma brucei brucei. Eur J Biochem241: 888±894 reduced in the yeast and abolished in T. brucei. Trans- Benne R, Sloof P (1987) Evolution of the mitochondrial protein port of amino acids across the inner membrane requires synthetic machinery. Biosystems 21: 51±68 a membrane potential. It is therefore likely that the re- Braly P, Simpson L, Kretzer F (1974) Isolation of kinetoplast- duction in translation observed in the absence of a mitochondrial complexes from Leishmania tarentolae. J Proto-zool 21: 782±790 membrane potential was an indirect eect due to re- Brekk CKD, Speijer D, Dekker H, Muijsers AO, Benne R (1997) duced uptake of amino acids. Nevertheless, such an ef- Further evidence for the presence of mitochondrially encoded fect is expected to be speci®c for mitochondria.
subunits in cytochrome c oxidase of the trypanosomatid Cri- In summary, our results present for the ®rst time di- thidia fasciculata. Biol Chem 378: 837±841 Harris ME, Moore DR, Hajduk SL (1990) Addition of uridines to rect evidence for translation in isolated mitochondria of edited RNAs in trypanosome mitochondria occurs indepen- T. brucei. The observed mitochondrial protein synthesis dently of transcription. J Biol Chem 265: 11368±11376 shows the expected properties of being resistant to Hauser R, Pypaert M, HaÈusler T, Horn EK, Schneider A (1996) translation inhibitors of the cytosolic type but being In vitro import of proteins into mitochondria of Trypanosoma sensitive to prokaryotic type translation inhibitors. Fu- brucei and Leishmania tarentolae. J Cell Sci 109: 517±523 Kleisen CM, Borst P (1975) Are 50% of all cellular proteins syn- ture work will focus on the identi®cation of the mito- thesized on mitochondrial ribosomes in Crithidia luciliae? Bio- chondrially synthesized gene products.
Laub-Kupersztejn R, Thirion J (1974) Existence of two distinct Shu HH, GoÈringer HU (1998) Trypanosoma brucei mitochondrial protein synthesis systems in the trypanosomatid Crithidia ribonucleoprotein complexes which contain 12S and 9S ribo- luciliae. Biochem Biophys Acta 340: 314±322 SchaÈgger H, Jagow G von (1987) Tricine-sodium dodecyl sulfate- Sollner-Webb B (1996) Trypanosome RNA editing: resolved. Sci- polyacrylamide gel electrophoresis for the separation of pro- teins in the range from 1 to 100 kDa. Anal Biochem 166: 368± Speijer D, et al. (1996) Puri®cation and characterization of cyto- chrome c oxidase from the insect trypanosomatid Crithidia Schneider A (1994) Import of RNA into mitochondria. Trends Cell fasciculata. Mol Biochem Parasitol 79: 47±59 Spithill TW, Shimer SP, Hill GC (1981) Inhibitory eect of Shaw JM, Campbell D, Simpson L (1989) Internal frameshifts chloramphenicol isomers and other antibiotics on protein syn- within the mitochondrial genes for cytochrome oxidase subunit thesis and respiration in Trypanosoma brucei brucei. Mol Bio- II and maxicircle unidenti®ed reading frame 3 of Leishmania tarentolae are corrected by RNA editing: evidence for transla- Tittawella I (1998) Protein synthesis in mitochiondria isolated from tion of the edited cytochrome oxidase subunit II mRNA. Proc the trypanosomatid protozoan Crithidia fasciculata. FEBS Lett