Addictive Drugs and Stress Trigger Similar Change in Brain Cells, Animal Study By Patrick Zickler, NIDA NOTES Staff Writer
Preventing relapse is the most formidable challenge to successful treatment of drug addiction. After months or even years of abstinence, former users may experience powerful cravings that lead to resumption of drug abuse. A single exposure to drugs, an environmental cue associated with past drug taking, or a stressful event can precipitate renewed, uncontrollable drug seeking and abuse. Susceptibility to relapse, like the onset of addiction, is in part a consequence of changes to nerve cells in the brain. In recent experiments aimed at increasing understanding of the nature of these changes, NIDA researchers have established that most major drugs of abuse can induce long-term potentiation (LTP) in dopamine-releasing cells in an area of the brain called the VTA (ventral tegmental area). LTP primes these cells to react more strongly--and release dopamine more abundantly--in response to future exposures to the drug. Because dopamine's roles include alerting the mind that something important is happening or about to happen and triggering feelings of pleasure, this finding could help explain addiction's extraordinary and long-lasting hold over people. The researchers showed that stress also induces LTP in VTA cells, a possible clue to the long-observed connection between stress and relapse. Addictive Drugs and Stress Increase Sensitivity of Dopamine Cells in Mice Researchers injected mice with either saline, an addictive drug (cocaine, amphetamine, morphine, nicotine, or alcohol), or a nonaddictive drug that is active in the brain (carbemazepine or fluoxetine). Twenty-four hours later, the scientists measured the electrical properties of dopamine cells from the animals' ventral tegmental area (VTA). Cells from mice exposed to addictive drugs exhibited a higher ratio of AMPA to NMDA currents than did those of mice exposed to nonaddictive drugs or saline, indicating establishment of long-term potentiation (LTP), a condition that causes the cells to release dopamine more abundantly than they previously would have. The researchers also exposed mice to stress, but not to any drugs, and found the same LTP "fingerprint" when they examined VTA cells 24 hours later. Addictive Drugs and LTP
Dr. Robert Malenka at Stanford University in Palo Alto, California, and colleagues at Stanford and the University of California, San Francisco, first demonstrated that a single exposure to cocaine can establish LTP in the brain cells of mice (see NIDA NOTES Vol. 16, No. 5). Subsequently, the researchers set out to determine whether other addictive drugs have a similar effect on dopamine cells in the VTA. Dr. Malenka explains, "We found that amphetamine, morphine, nicotine, and alcohol, each of which is addictive but has its own molecular mechanisms of action, all trigger the same change that we saw with cocaine. We also found that medications that are active in the brain but not addictive do not have this effect." In their studies, the investigators demonstrated LTP by documenting an increase in the electrical activity in a VTA cell component called the AMPA receptor. When stimulated, AMPA receptors generate an electrical current that prompts the cell to release dopamine, with the strength of the current determining how much dopamine is released. In general, a repeated application of the same stimulus will result in the same amount of AMPA current and dopamine release. When a drug or other stimulus establishes LTP, however, subsequent exposures to it generate higher AMPA currents and more copious dopamine release. The increase in AMPA activity that signifies LTP is confirmed experimentally by showing an increased ratio of AMPA current to the current generated by another cell component, called the NMDA receptor. Dr. Malenka and his colleagues measured AMPA:NMDA ratios in mouse VTA cells before and after a single exposure to an addictive drug or a psychoactive medication. The ratios increased, indicating LTP had been established after exposure to amphetamine, morphine, nicotine, or alcohol. There was no increase, however, after exposure to the nonaddictive medications fluoxetine (an antidepressant) or carbemazepine (an antiseizure medication). "These observations are an intriguing followup to the results the research group found when they looked at the impact of cocaine alone," says Dr. Susan Volman of NIDA's Division of Neuroscience and Behavioral Research. "The study's finding that dissimilar addictive drugs act in a similar way to usurp an important neurobiological process supports the hypothesis that LTP plays a role in the transition from drug abuse to addiction and might contribute to relapse." Stress and LTP
Laboratory studies have shown that stress can cause reinstatement of drug taking in animals, and researchers believe that for some people, stress may play a role in the initiation of drug use or relapse to use after a period of abstinence. To examine this relationship, Dr. Malenka and his colleagues investigated whether stress in the absence of drug taking can induce LTP. Mice that had not been exposed to drugs were forced to swim for several minutes in a water tank with no escape. When investigators examined the animals' VTA cells 24 hours later, they found the same increased AMPA:NMDA ratios they had observed in mice exposed to addictive drugs. The association of stress with LTP helps explains what seems at first to be a puzzling relationship between stress and the development of addiction, Dr. Volman observes. "Stress is unpleasant, a negative stimulus. Addictive drugs, on the other hand, have a pleasurable effect, at least initially. The finding that stress alone can induce changes similar to those caused by drugs in VTA cells indicates the possibility of a priming mechanism that could make someone who has experienced stress 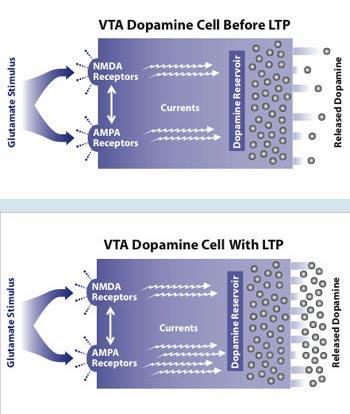 much more vulnerable to addiction," says Dr. Volman. LTP could also be part of a neurobiological mechanism that explains the observed association between stress and drug reinstatement in animals or relapse by humans. "Reinstatement and relapse are like reawakening a learned behavior. It is possible that the effect of stress, like that of drugs, plays a role in this reawakening," Dr. Volman says. "The changes we see in dopamine cells in the VTA may be a key neural adaptation that contributes not only to addiction, but also to the interaction of stress with drug abuse and addiction," concludes Dr. Malenka. "This adaptation may also represent a potentially important target for therapeutic intervention in the treatment of addictive disorders." Saal, D.; Dong, Y.; Bonci, A.; Malenka, R. Drugs of abuse and stress trigger a common synaptic adaptation in dopamine neurons. Neuron 37(4):577-582, 2003. Long-Term Potentiation in Dopamine Cells Long-term potentiation (LTP) is one of the brain's key mechanisms for registering experience and using it to shape future responses, as in learning and remembering. When an experience or other stimulus induces LTP in a cell, the cell responds more strongly to future exposures to the same stimulus. For example, if you hit a fast ball for a home run, LTP is part of the reason you might get excited the next time you are at the plate and see a fast ball coming. illustrate how LTP occurs, using the example of dopamine cells in the brain's
ventral tegmental area (VTA). Top image: The process begins when a drug or
other stimulus raises the level of the brain chemical glutamate. The glutamate
in turn stimulates specific sites, called AMPA receptors and NMDA receptors,
on the dopamine cells. The two receptors then interact to produce an electrical current that causes dopamine to flow from the cell's reservoir through the cell's membrane into the space outside the cell. Bottom image: Once LTP has been
established, subsequent exposure to the same stimulus results in a higher
AMPA current than occurred in response to the initial exposure, resulting in greater dopamine release. Volume 18, Number 5 (December

VETERINARY ONCOLOGY CENTER Helping Pets with Cancer FOLLOW-UP BLOODWORK Dear Doctor Our mutual patient is due for recheck blood work soon and may come to your clinic for this to be performed. If you have any questions please call me. • The type of bloodwork needed will be indicated on the last set of discharge instructions (feel free to run additional bloodwork as deemed neces