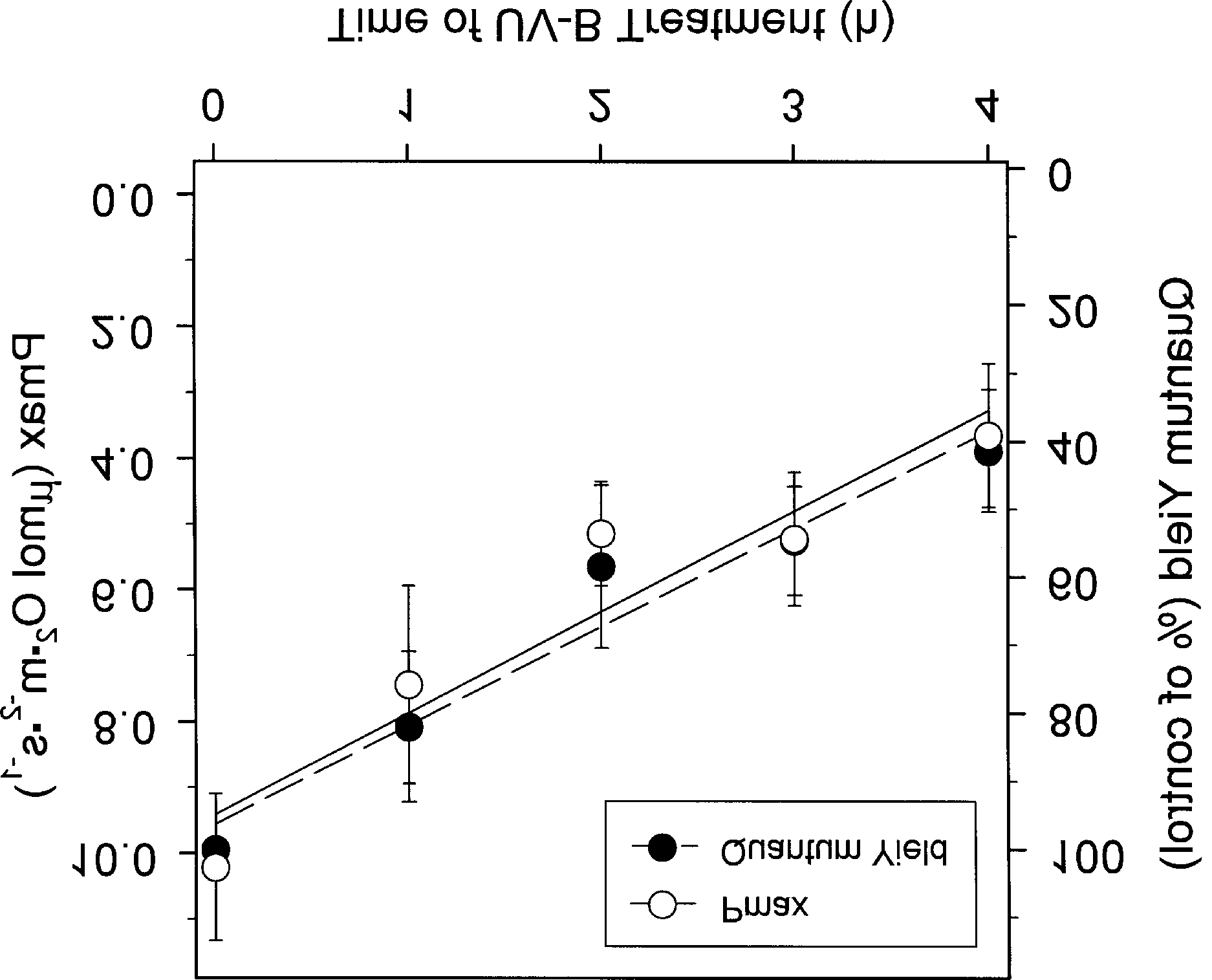 Photosynthetic Response and Protective Regulation to UV-B Radiation assayed according to Rao et al. [32]. CAT activity was determinedspectrophotometrically by the decrease of absorbance at 240 nmin a cuvette with 1 mL of reaction mixture containing 100 mMK-PO (pH 7.0), 40 µL of crude extract, and 10 mM H O , which was added just prior to the initiation of reaction. GR was assayedin 1 mL of reaction mixture containing 100 mM K-PO (pH 7.8), 0.2 mM NADPH, 0.5 mM GSSG (oxidized glutathione), 2 mMEDTA, and 100 µL of crude extract by monitoring decrease ofabsorbance at 340 nm. The assay was initiated by the addition ofNADPH. POD activity was quantified by measuring the rate ofguajacol tetramerization shown as the increase in absorbance at470 nm in a cuvette containing 1 mL of reaction mixture of 100mM K-PO (pH 6.5), 16 mM guajacol, 10 mM H O , and 100 µL of crude extract. The reaction was initiated by adding crudeextract and followed for 10 min.
APX and DHAR were measured by following the method of Asada [39]. APX was monitored by the decrease in absorbance at Figure 1. Changes in the Pmax and quantum yield of O evolution in the UV-B treated leaves. Data presented are mean values ± S.E.
290 nm in 1 mL of reaction mixture composed of 50 mM K-PO4 (pH 7.0), 0.5 mM ascorbate, 0.1 mM H O , and 5 µL of crude extract. DHAR was assayed in 1 mL of reaction mixture containing50 mM K-PO (pH 6.5), 0.5 mM dehydroascorbate, 5 mM GSH yield implies that UV-B treatment may not make green pepper (reduced glutathione), 0.1 mM EDTA, and 15 µL of crude extract more susceptible to photoinhibition. Pmax was decreased more by monitoring increase of absorbance at 256 nm.
rapidly than quantum yield after UV-B treatment in coleus [40]. Changes in Chl fluorescence parameters RESULTS AND DISCUSSION
The initial fluorescence (Fo) and maximal photochemical efficiency (Fv/Fm) are general indicators for PS II functionality.
General effect of UV-B on leaf morphology Damages to PS II are often accompanied with rise in Fo level The detached leaves did not show any significant change in and drop in Fv/Fm. Changes in Fo reflect structural alterations appearance after 24 h of UV-B treatment. However, the leaves at the antenna of PS II while those in Fv/Fm indicate varied became more darkened and glossy after a few h of UV-B energy capturing efficiency in PS II [41]. As shown in Fig.
treatment. Morphological alteration such as thickening of 2A, after UV-B treatment Fo was increased whereas both Fm leaves and formation of cuticular waxes were shown to be the and Fv were decreased rapidly in the initial 2 h. Photochemical primary response to UV-B in terrestrial plants [25]. In green efficiency of PS II, represented by Fv/Fm, was linearly declined, pepper, the leaves also became glossy and dark, possibly due although to a lesser extent than Pmax, showing 12%, 23%, 29% to the accumulation of waxes and some UV-B absorbing and 39% reduction after 1, 2, 3 and 4 h of UV-B treatment (Fig. 2B). The linear decrease in Fv/Fm was also observed inDunaliella after UV-B treatment [42].
Effect of UV-B on Pmax and quantum yield of O evolution After onset of illumination, the maximal Chl fluorescence To evaluate the extent of deteriorative effect of UV-B on the declines as photosynthetic reaction proceeds due to the photosynthetic capacity, Pmax and quantum yield of O photosynthetic electron flow represented as qP, and nonradiative evolution were measured after direct treatment of UV-B on energy dissipation and ∆pH formation manifested as NPQ the detached leaves. Pmax was determined under saturating [34]. Both qP and NPQ were decreased linearly in a parallel PFR (270 µmol· m-2·s-1) while quantum yield was determined phase by the increased time of UV-B treatment (Fig. 3).
under low PFR (30 and 50 µmol· m-2· s-1). As shown in Fig. 1, Decreased qP indicates that the acceptor side of PS II (Q ) is Pmax was decreased about 28% after 1 h, 47% after 2h, 49% overly reduced by hindered electron flow [34]. NPQ usually after 3 h, and 64% after 4 h while quantum yield was decreased increases when qP is decreased [44]. Decreased NPQ about 18%, 42%, 46%, and 59%, respectively. Although accompanied with decreased qP may reflect the damage in decrease in Pmax preceded decrease in quantum yield, both ATPase by UV-B, which would block DpH formation by Pmax and quantum yield were linearly decreased in a parallel increased back pressure. APTase was shown harmed in earlier phase in relation to the increased time of UV-B treatment, demonstrating both maximal photosynthetic activity and Changes in absorbance at 820 nm reflects the oxidation and efficiency in the photosynthetic apparatus were similarly reduction state of P-700 that reflects electron flow from PS II affected by UV-B. Parallel decrease in Pmax and quantum to PS I and from PS I to NADP+ [43]. After 4 h of UV-B 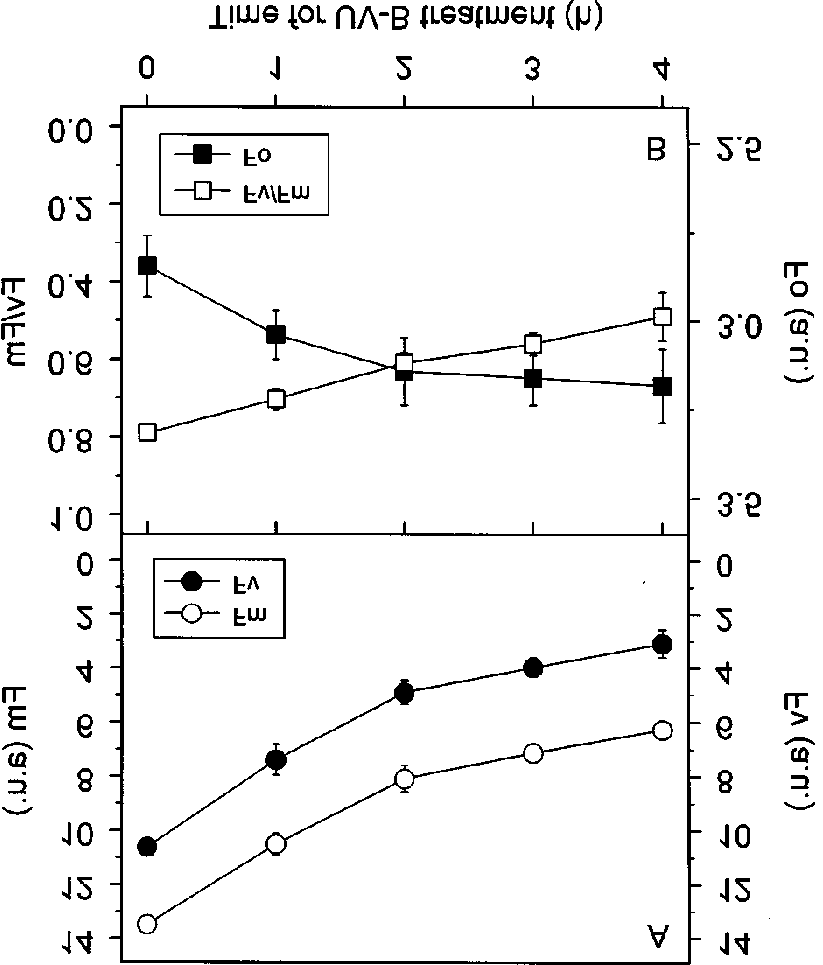 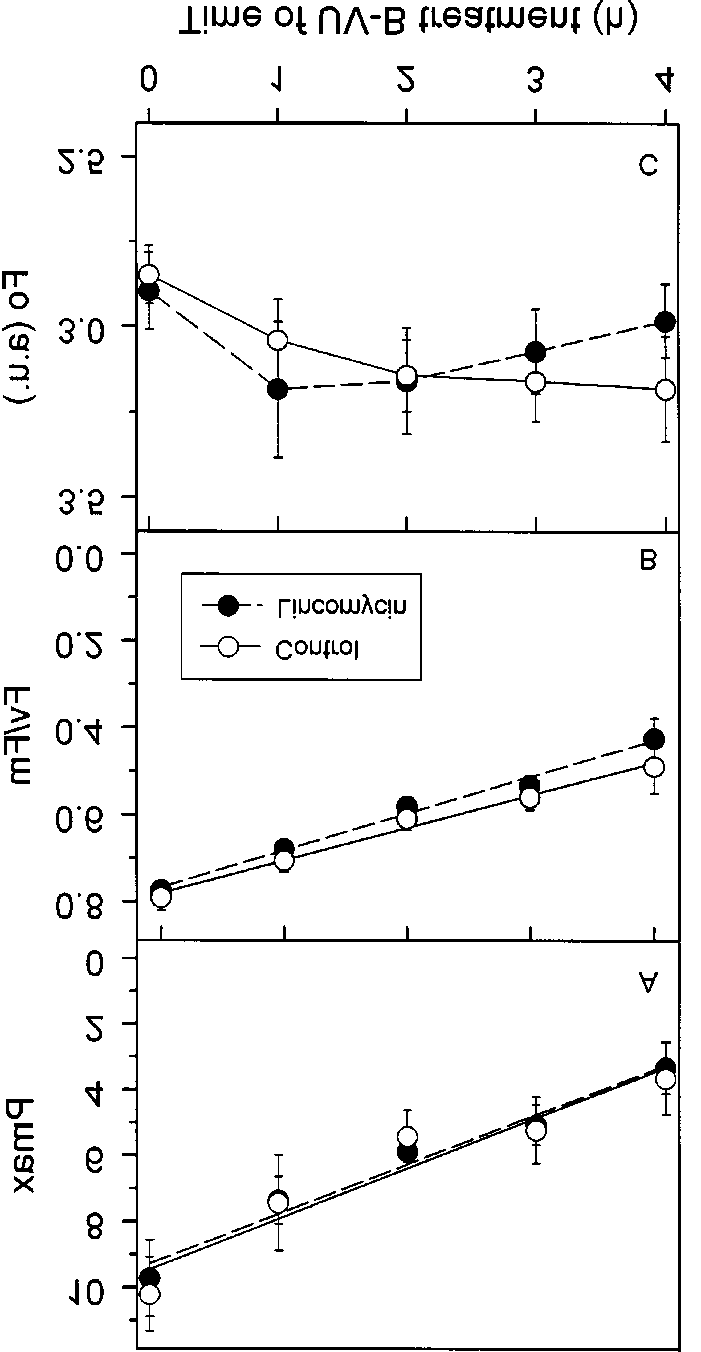 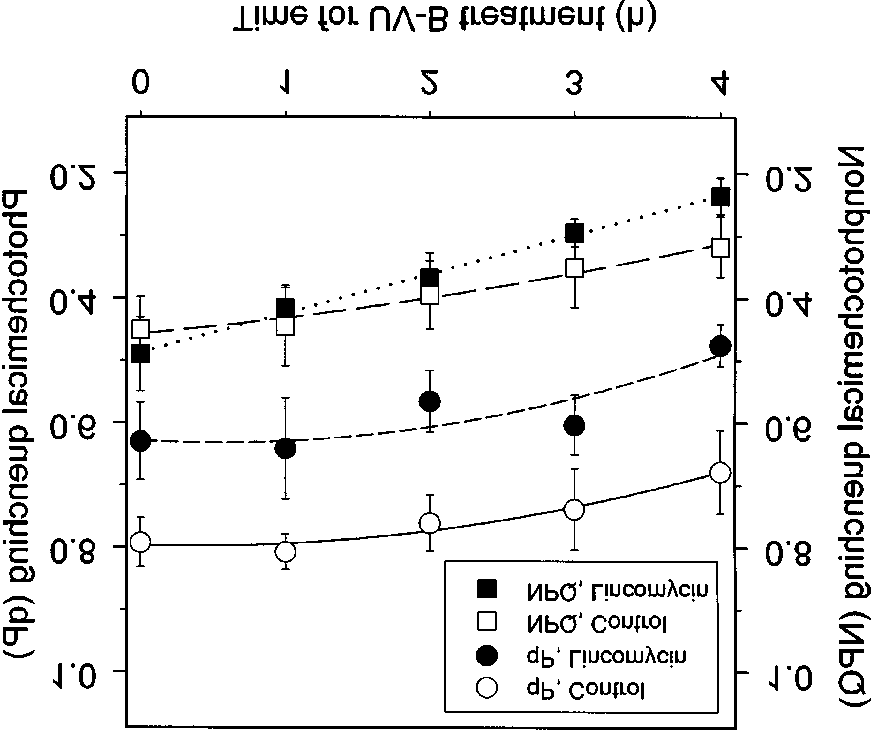 Figure 2. Changes in various Chl fluorescence parameters in theUV-B treated leaves: (A) the maximal (Fm) and variable (Fv)fluorescence, (B) the initial (Fo) and the maximal photochemicalefficiency of PSII (Fv/Fm). Fo, Fm, and Fv are given in arbitraryunits. Data presented are mean values ± S.E. for 5 measurements.
Figure 4. Changes in the Pmax (A), Fv/Fm (B), and Fo (C) in thecontrol and lincomycin-treated leaves after UV-B treatment. Datapresented are mean values ± S.E. for 5 measurements.
effect in photoinhibition. Similarly, UV-B treatment damagedD1 proteins [17]. In view of these, UV-B was treated to thelincomycin-infiltrated leaves to test the role of D1 proteinturnover in alleviating the adverse effect of UV-B. As shownin Fig. 4A, decrease in Pmax was identical in control andlincomycin-treated leaves. However, decrease in Fv/Fm andincrease in Fo was accelerated in lincomycin-treated leaves(Fig. 4B and 4C). The decrease in qP and NPQ was alsoaccelerated in lincomycin-treated leaves (Fig. 3). The results Figure 3. Changes in the photochemical quenching (qP) and implicate that D1 protein turnover would play a role in nonphotochemical quenching (NPQ) in the control and lincomycin- treated leaves after UV-B treatment. Data presented are mean values Using antisensor lines of Arabidopsis plants with reduced content in xanthophyll, the effect of UV-B treatment was alsotested. Antisensor plants showed more rapid decline in Fv/ treatment absorbance at 820 nm was not changed in P-700 Fm. In addition, decrease in qQ and NPQ occurred faster oxidation-reduction kinetics (data not shown). Therefore, PS I (data not shown). These results indicate that xanthophyll appeared to be resistant to UV-B damage as previously cycle is also involved in relieving the deteriorative effect of UV-B. Therefore, photoprotective mechanisms appear to bebeneficiary for reducing the adverse effect of UV-B.
Effect of lincomycinTurnover of D1 protein plays a significant role in overcoming Effect on the contents of photosynthetic pigments photoinhibition as lincomycin-infiltrated leaves show exacerbating The adverse effect of UV-B on photosynthesis may result in 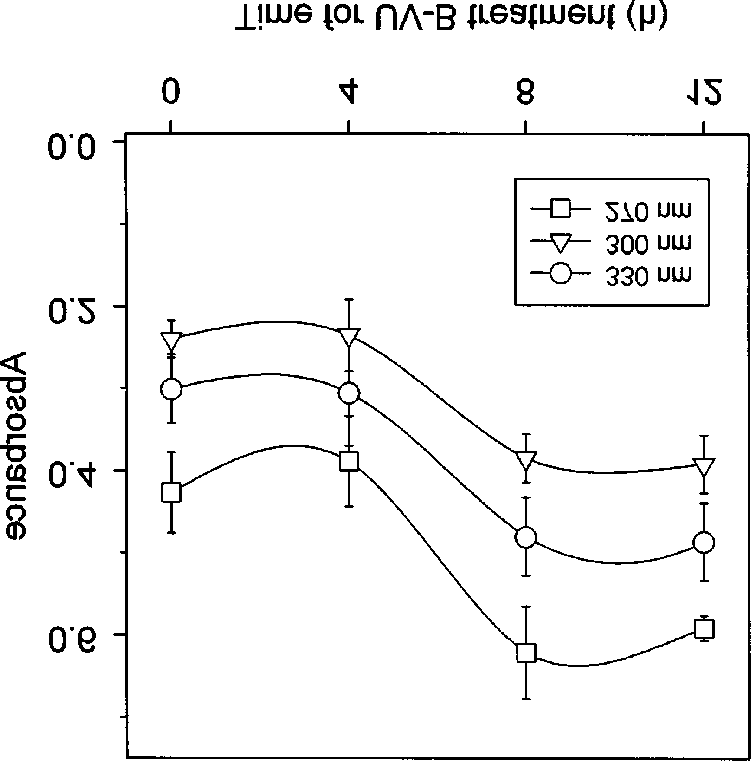 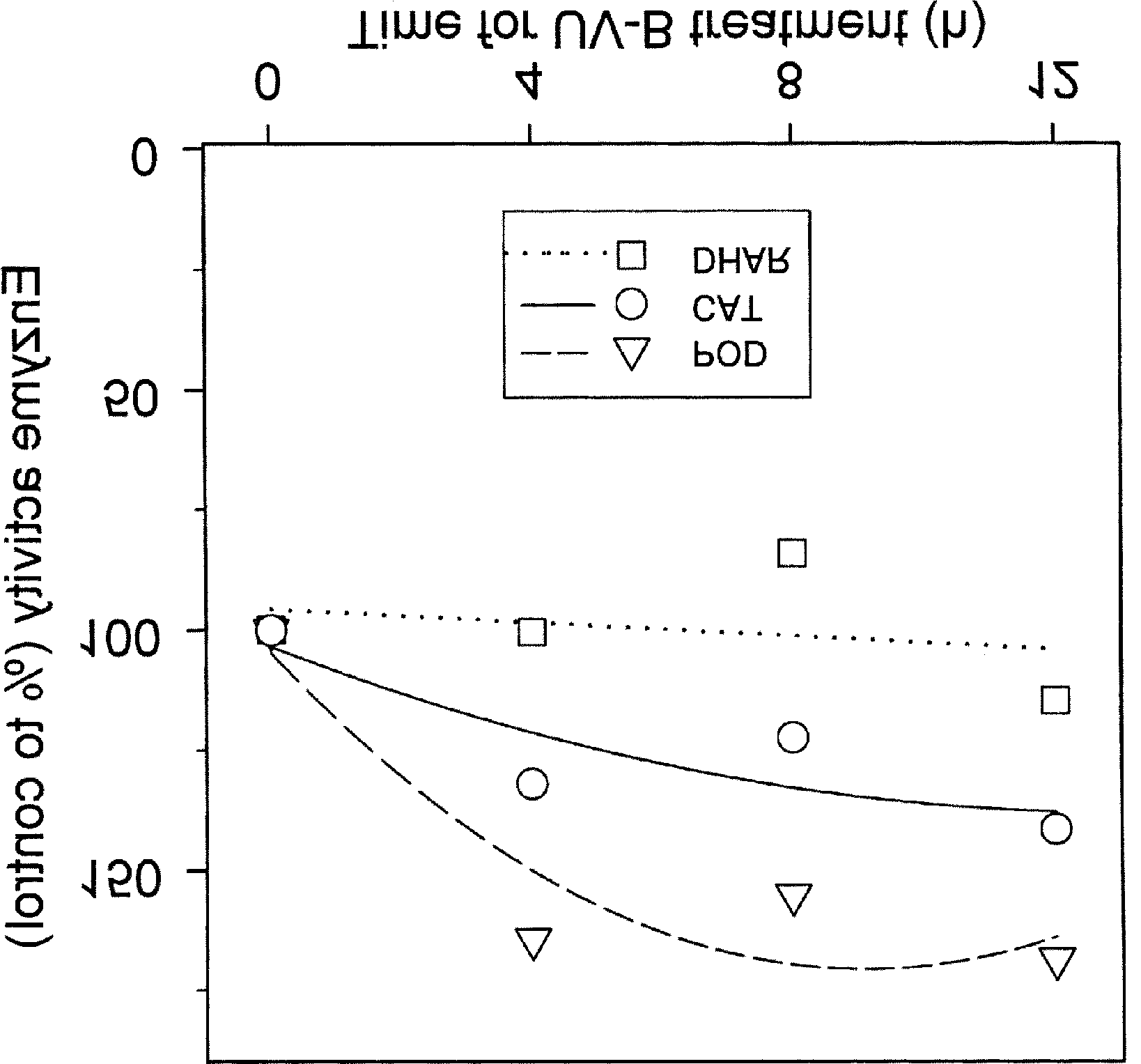