Tetracyclines for bone metastasis Saikali and Singh of MMP inhibitors are in various stages of drug cyclines, demonstrating inhibition of MMP-14 activity development and testing [reviewed in 34]. Doxycycline which leads to lack of activation of MMP-2 [38] and an is, because of the data discussed above, a promising antiangiogenic effect similar to doxycycline in an in vitro compound in this category. To add to its interest is the assay [35]. Col-3 also inhibits colon cancer cell invasive- recent discovery that it is able to inhibit angiogenesis in ness [39], and inhibits cell proliferation, invasion, tumor an in vitro assay [35], a property which would only further growth and metastasis in a metastatic prostate cancer contribute to its anticancer potential given the known model to the same extent as, and in some cases more contribution of angiogenesis to tumor growth and efficiently, than doxycycline [40]. Once again, some invasion. Doxycycline is currently in phase I trials for degree of cell specificity is observed, since in leukemia cancer therapy. One of the issues uncovered in these cell lines the effects of Col-3 are not as strong and trials, however, is dose-limiting toxicity exhibited by comparable to those generated by doxycycline [17].
symptoms such as fatigue and nausea [36]. This is likely Regardless of cell-specificity arguments, the potential of due to the fact that many of the cytostatic, cytotoxic and Col-3 was important enough to warrant clinical testing anticollagenase effects of doxycycline leading to anti- and was the subject of at least two phase I clinical trials.
tumoral behavior were observed at concentrations usually Emerging from one trial was the observed effect of higher than those needed for bacteriostatic effects, and disease stabilization in some patients with a non- thus in an anticancer trial the effects of doxycycline at epithelial form of malignancy [41], although concerns higher doses needed to be tested. Conclusions concern- have also arisen due to drug-induced side-effects such as ing the in vivo acceptability and efficacy of anticancer lupus and anemia [41–43]. Another phase I trial was doxycycline doses in a first-line therapy will have to be conducted in a more homogeneous study population, suspended pending the final outcome of these trials.
eighteen patients with AIDS-related Kaposi’s sarcoma.
The results of this trial indicated antitumor activity in Another interesting MMP inhibitor also belongs to the this population at well-tolerated doses, with adverse tetracycline family, Col-3 (4-dedimethylaminosancycline, effects including photosensitivity and headache [44]. It is also known as CMT-3), a chemically modified tetracy- interesting to note that the variable response noted in cline (Fig. 1). Chemically modified tetracyclines that lack this study may be partially explained by recent evidence antimicrobial activity, but still possess anticollagenase, from animal studies regarding factors that influence activity have been developed and tested for various irregular absorption profiles of Col-3 after oral adminis- properties [reviewed in 37]. In the context of cancer tration [45]. These factors include drug particle size, research, they elicited a certain amount of interest presence of food and levels of endogenous bile, and because they effectively inhibit MMPs and possess some taking them into account in phase II trials may permit degree of selective cytotoxicity, similar to their anti- more homogeneous responses in the patient population.
microbial tetracycline counterparts. Col-3 appears to bethe most promising of the chemically modified tetra- Effect of doxycycline and other tetracyclineson boneThe ability of tetracyclines to inhibit MMP activity of certain cancer cells points to other possible applications for this family of compounds. MMPs are known to beimportant mediators of metastasis formation in bone [reviewed in 46], contributing to significant morbidity incancer patients, especially those with tumors of theprostate or breast. Formation of osteolytic lesions directly by cancer cells is partially mediated by MMPs [47,48].
Osteoclast-mediated osteolysis is also dependent onMMPs, not in the initial phase of bone mineral resorption but for unmineralized matrix degradation [46]. Thus,MMPs have a 2-fold role in osteolytic cancer lesion formation, being produced directly by the tumor cells andby osteoclasts after induction by tumor cells. The role of MMPs is likewise important in other osteolytic lesions such as osteoporosis. To this effect, MMP inhibitors arebeing studied in the treatment of osteoporosis, including the tetracycline family. In ovariectomized aged rats, amodel for postmenopausal osteoporosis, minocycline was Chemical structures of the tetracycline family members discussed.
able to both increase bone formation and decrease boneloss in trabecular bone, comparatively to estrogen [49,50].
Copyright Lippincott Williams & Wilkins. Unauthorized reproduction of this article is prohibited. 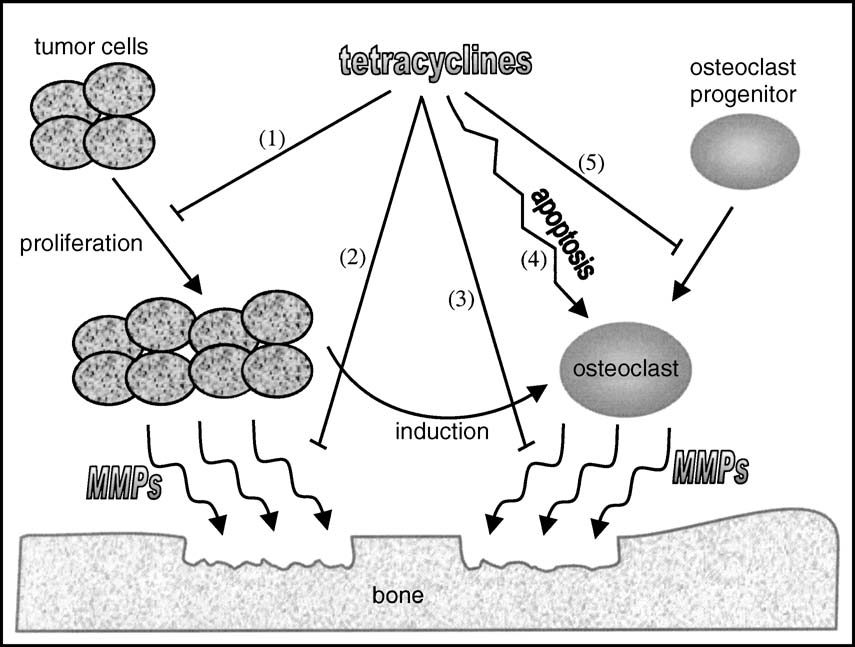 Five Years After To Err Is Human What Have We Learned? Five years ago, the Institute of Medicine (IOM) called for a national effort to make health care safe. Although progress since then has been slow, the FIVEYEARSAFTERTHEINSTITUTE IOMreporttruly“changedtheconversation”toafocusonchangingsys- tems, stimulated a broad array of stakeholders to engage in patient safety, and moti