Coffee more than a caffeine buzz in shops across region 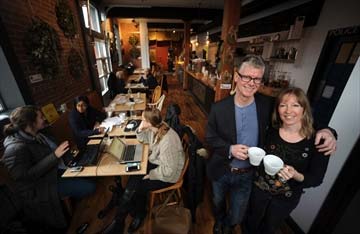 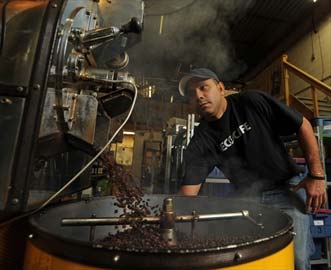 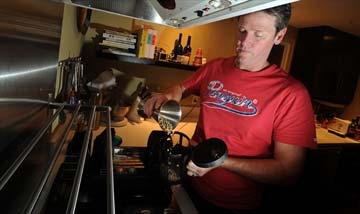 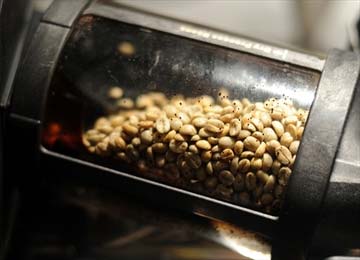 Coffee more than a caffeine buzz in shops across region Coffee is big business in Canada
It’s a $5-billion business annually in Canada, says the Coffee Association ofCanada. Here’s how those billions breaks down: Grocery and retail stores sell an estimated $900 million a year Restaurants and eateries sell $3.5 billion to $4 billion Office coffee sales are estimated at $325 million to $400 million Monica and Graham Braun own the Monigram Coffee Roasters in the downtown 4,000 to 5,000 jobs in importing, roasting and manufacturing coffee Galt area of Cambridge. The shop features its own coffee bean roaster. 160,000 to 200,000 jobs in coffee service industries.
Only tap water is a more popular beverage for Canadians older than 16, thecoffee association says.
Here’s data from the association’s 2013 Canadian Coffee Drinking Study: 65 per cent of adults consumed coffee in the last day; 78 per cent say they’vehad some in the last week Coffee drinkers consume on average 3.2 cups daily Traditional coffee is the most common coffee type consumed (55 per cent),espresso-based coffee (12 per cent), instant traditional coffee (nine per cent),iced/frozen blended coffee (six per cent) and decaffeinated coffee (five per Roastmaster Luis Molina roasts coffee beans at Eco-Coffee in Kitchener. 78 per cent of Canadians drank coffee at home the day before; 37 per centdrank out of home (Only Italians drinks more coffee outside home) 32 per cent of Canadians drank an expresso-based specialty coffee in theprevious week; cappuccinos (16 per cent) and lattes (14 per cent) were mostpopular.
53 per cent of coffee is made in a drip brewer machine.
25 per cent of coffee was prepared in single-cup machines, which are growingin popularity.
Ian Wood loads his coffee roaster with raw green coffee beans under the range Single-cup brewer ownership is 20 per cent in Canada, compared to 12 per hood in his Cambridge home. Ventilation is essential for the roasting process. Aaron Schwab doesn't have to wear his coffee passion on his sleeve.
It's tattooed on the Kitchener photographer's leg: an all-seeing eye hovers overa life-size cup and the words "Liquid God." "I don't remember the last day I went without a cup of coffee." He's not alone. Two-thirds of adult Canadians say they've drank a cup ofcoffee over the preceding day; on average we sip 3.2 cups daily. Canadiansrank ninth in the word in annual coffee consumption in 2006, according toworldmapper.org. We consume 6.1 kilograms of coffee each, compared to 4.1 Raw green coffee beans tumble as they roast in a portable roaster in Ian Wood'sCambridge home. kilograms in the U.S. Finland residents are tops worldwide, at 12 kilograms ayear.
And if the growing number of coffee shops around the Waterloo-Wellington 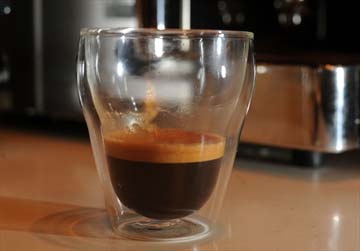 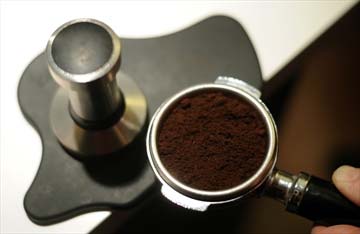 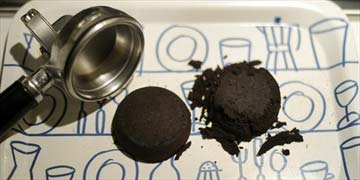 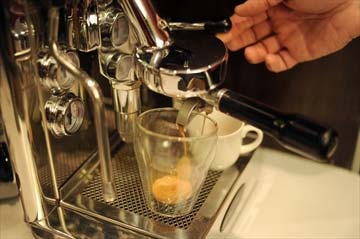 area are any indication — there's well over 100 across the district — it's blackgold here, too.
Local coffee aficionados like Schwab are becoming more educated aboutcoffee — really good, fresh coffee. Where were the beans grown? How was itprepared? How was it served? Just like picking a good wine for dinner orsampling locally brewed craft beer.
Most days, Schwab drops by an independent coffee shop to soak in theatmosphere, read a book and to sometimes meet a client — a place where Green coffee beans have turned deep brown as they tumble and roast in a portable there's a good chance he knows the barista by name. Like Café Pyrus or Yeti roaster in Ian Wood's Cambridge home. Café in Kitchener. Or Death Valley's Little Brother in Waterloo. Sometimes, hedrives south to Monigram Coffee Roasters in Cambridge.
"I do feel very welcome. I can sit drink a cup of coffee with my friends. It doesfeel a bit like my second living room." A teacher at Conestoga College stirred Schwab's interest in coffee sevenyears ago, with talk of home roasting and grinding of beans, then carefulbrewing. Then Schwab dropped by Pyrus on Charles Street one night yearsago, where he learned a bit about how to systematically taste and savourcoffee, identifying where it grew and how it was roasted.
He's far from an expert at 27. "I'm just wide-eyed and fascinated by coffee," theKitchener photographer says.
Ian Wood's just-roasted beans turn into a dark shot of espresso. There's more to your morning cup of coffee than a warm feeling and maybe acaffeine buzz.
In your hand is your tiny part of a massive, globe-girdling agricultural andindustrial economy, says Stuart McCook, a history professor at the Universityof Guelph.
"Why are we drinking something from beans from a plant that originated inEthiopia? As consumers we are participating in an environmental relationshipthat spans the world. It is never just a simple cup of coffee." Ian Wood gets ready to tamp freshly roasted and ground coffee beans in his Coffee emerged as a popular drink in the Middle East in the 14th century.
Cambridge home. It's a blend of 25 per cent Ethiopian beans and 75 per centGuatemalan beans. Coffee houses became secular meeting places in Islamic countries, wherealcohol wasn't permitted. Coffee spread north into Christian Europe in the 17thcentury, where the alcohol-free stimulant was embraced, McCook said.
Coffee houses became "a place neither controlled by the church and statewhere people could get together and talk," which religious and political leadersfeared, he said.
King Charles II of England tried to ban London's coffee shops in 1676. Theedict roiled the city and nearly lead to overthrow of the monarchy. Charlesbacked down two days before his proclamation was to take effect. By 1700,there were more than 2,000 coffee shops, says Mark Pendergrast in The spent pucks of coffee grounds are discarded from the coffee maker at Ian Coffee followed Europeans as they travelled around the world, McCook said.
Since it was easy to roast coffee beans, the "social ritual" of serving coffee athome became more popular in North America than drinking out.
By the early 20th century, coffee became big business around the globe.
Preparation of beans moved out of the home to easy-open cans on storeshelves. Convenience trumped craft.
But starting in the 1980s, coffee became part of the simmering backlash tohighly processed, corporate food. Specialty coffee shops popped up, wherestaff told the story of the beans in the bags. Not just pointing to the cream andsugar on the counter.
Ian Wood pulls a fresh shot of espresso from his coffee machine inside hisCambridge home. 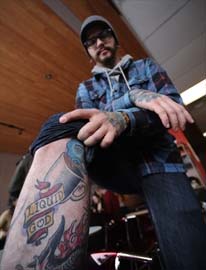 Local food blogger Andrew Coppolino was pleasantly surprised when hecounted all the coffee shops in Kitchener and Waterloo a few years ago.
There was something like 20 coffee shops in downtown Kitchener alone, saidthe creator of waterlooregioneats.com.
"Only two of those were chain coffee shops," he said. "I think what's happeningis we've become more aware about food in general — local, natural food,healthy eating." We can't get locally grown coffee beans, "but we want coffee that has localtouch to it." Kitchener's Aaron Schwab, who can't remember the last day he went without a cupof coffee, shows off his coffee tattoo. That reality has pushed chains to up their coffee quality, chasing what'shappening at more locally owned coffee houses, he says.
Look at the effort McDonalds put into making their coffee better — then giving it away to entice customers in the door.
Then there's the ongoing Timmies transformation, where hard plastic chairs are fast giving way to comfy seats in café-styledeateries, with awnings over street-front windows. Canada's fast food giant is also nudging customers to slow down, not gulpand go. Free wireless internet encourages lingering over that new dark roast coffee on the menu.
Yes, it sounds a lot like what Starbucks has been doing for a decade. It was it was Seattle coffee star that gave local coffeeentrepreneurs encouragement and confidence to pour something better.
"It's independents that are raising the bar for coffee flavours, coffee creation," Coppolino says. "People are interested in a realcoffee experience, not a big coffee experience." The game for coffee shops is educating customers to seek ethical quality and entice them with new taste experiences, saysBill Barrett, founder of Guelph's Planet Bean.
"Palates are developing. People are becoming coffee geeks," Barrett said.
Planet Bean started roasting in Guelph in 1997. Today, Barrett sells specialty coffees at three locations and ships bags ofbeans to 200 customers across the district.
Down Highway 7 in Kitchener, Edward Denyer fires up his industrial-sized coffee roaster three times a week. More than 400kilograms a week are cooked under the watch of a trained roastmaster.
Denyer is co-owner of Eco-Coffee, which sells green and roasted beans out the door of 300 Mill St.
The company also wholesales coffee across the city to specialty supermarkets and stores, along with placing coffee servingequipment in offices.
The economy may have been soft over the past few years, but that hasn't scared customers away from coffees sometimescosting $20 a pound.
"Everyone from all walks of life appreciates a good cup of coffee," says Denyer.
After 30 years of buying mocha pots and French presses, coffee grinders and chrome espresso machines, Ian Wood finallyfigured out the key to making a great cup of coffee.
Buy the best beans you can afford, do everything yourself, and savour the fact you're getting great coffee at a bargain a price.
Take individual pods in single-serving brewers, for example. Do the math and the cost is obscene, he says.
"Really, coffee shouldn't be like $80 a pound. I could make better coffee by putting it through my sock because I'm using thebest coffee," the Cambridge man says.
He buys quality green coffee beans for around $10 a pound.
At home, Wood handles his $1,700 espresso machine like a barista. Without pausing, he puts a leaf-pattern on a latte for hiswife. A moment before, he made a silk-smooth medium roast Americano.
Wood's coffee journey began in the early 1980s, when he travelled in Europe after university.
No more ordering something hot and sweet to wash down a doughnut. He found real coffee houses where people lingeredand talked.
"It was not about the coffee. It was preparation, the ritual, the serving it with friends," he said.
Graham Braun poured a bit of "illegal coffee" in August when he cracked open his door along a forgotten alley in downtownCambridge.
Without a city business licence in hand, Monigram Coffee Roasters couldn't sell anything in a renovated tattoo parlour acrossfrom the bus terminal.
People were already peeking in the windows, or walking in to see what was going on as smoke puffed from the smokestackover the coffee roaster. So with seven followers on Twitter, Braun sent a message saying: "It's possible that yesterday's roastof Yirgacheffe will blow your mind. Open for pourovers or by the bag." Within five minutes, two of his twitter followers were at the door asking for a cup. He introduced them to each other and theysat and talked over coffee for three hours. Three days later on Aug. 21, he was legal and customers kept coming.
Monigram's 24 seats face out over a city parking lot. Braun likes the view: he watches renovations underway on the rear of150-year-old storefronts and apartments facing Main Street.
The revival started years before Monigram opened and Braun is keen to be a part of it. The area could grow into somethinglike Toronto's Danforth, or Kitchener's Belmont Village, he said.
"We see a pretty good revitalization of the back of the buildings. It's turning the parking lot almost into a piazza" There's already a half dozen coffee shops in the old Galt downtown, which didn't have one a decade ago.
For Braun, the more coffee shops the better — for his business and the downtown economy as a whole.
So which comes first? Coffee shops or downtown revitalization? "The problem is trying to determine cause and effect," says Rick Haldenby, director of the University of Waterloo School ofArchitecture in Cambridge.
There's no hard data to explain a symbiotic connection between coffee shops and a healthy urban area, he said.
But when Haldenby looks outside office at the architecture school overlooking the Grand River in old Galt, he's happy toreport coffee has followed his students over the last decade.
"When we first decided to come to Galt, you couldn't get a cappuccino anywhere," he said.

Placebos, placebo effect, and the response to the healing situation: the evolution of a concept