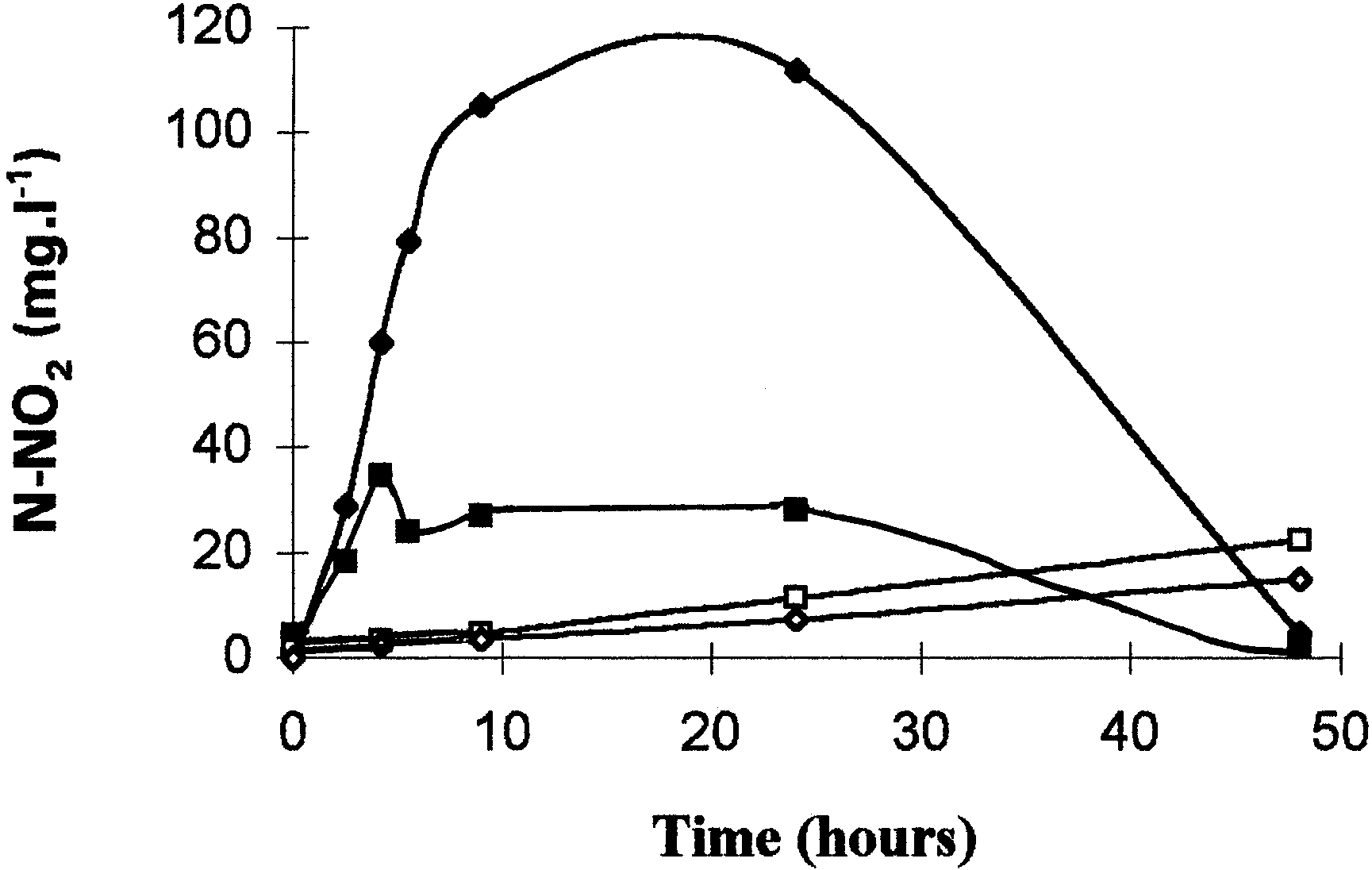 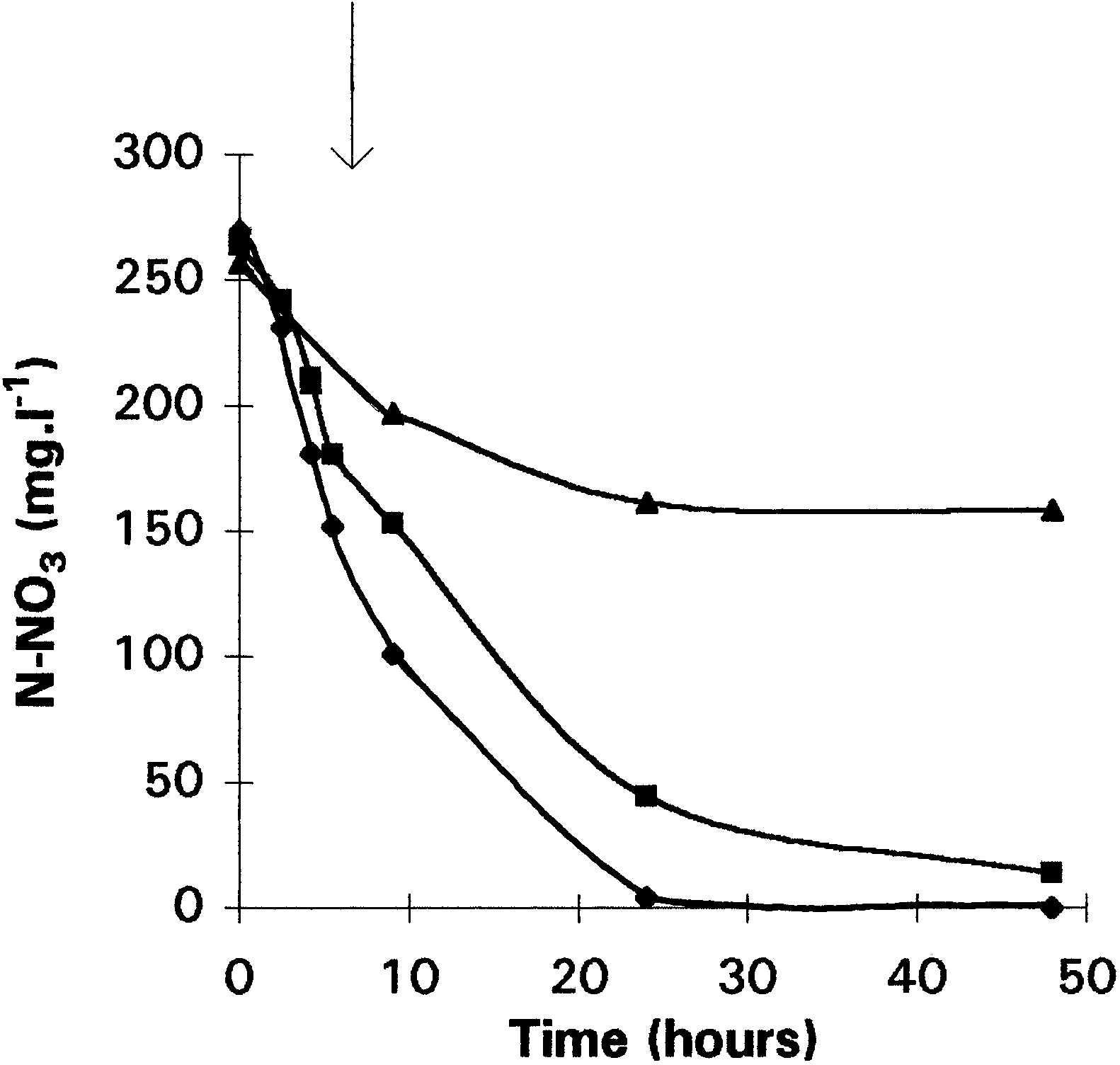 D. Patureau et al.: Denitrifying Enzymatic System of Comamonas sp.
Fig. 1. Influence of chloramphenicol (150 µg · ml21) on the nitriteproduction during anaerobic (M, N) and partial aerobic cultures(U, V) on nitrate with Comamonas sp. Cultures were inoculatedwith nonadapted preculture. Chloramphenicol was added at thebeginning of the culture. M, U, control cultures; N, V, cultureswith chloramphenicol.
Fig. 2. Consumption of nitrate during anaerobic (M), partial aerobic(U), and total aerobic (Q) growth conditions of Comamonas sp.
The arrow indicates the time at which oxygen has completelydisappeared in the partial aerobic culture. Cultures were inoculated 2.0 m 3 1/8 inch) column was maintained at 220°C, injector at Proteins were determined by Lowry’s procedure with bovine whereas 99 nmol were obtained in the control tube.
This measurement of residual activity might be owing to the existence of a nitrate reductase in the aerobicculture.
Existence of a constitutive nitrate reductase. Chlor-
Our experiments showed that a constitutive nitrate amphenicol (150 µg · ml21) was used to determine reductase is present in an aerobic culture nonadapted whether or not denitrifying enzymes were synthesized; to N-oxides. This enzyme could be active under nitrate reductase activities were measured in aerobic anaerobic as well as aerobic conditions at a small basal cultures inoculated with cells nonadapted to N-oxides.
It was added during cell harvesting by centrifugation(existence of anaerobic conditions in the pellet could Synthesis and activity of nitrate and nitrite reducta-
enhance synthesis of enzymes) and in the different ses under aerobic condition. The previous experi-
batch assays. Nitrate reduction was measured by ments showed that a higher nitrate reduction rate is production of nitrite (Fig. 1). Addition of chlorampheni- observed when protein synthesis is not inhibited (Fig.
col in the anaerobic and partial aerobic cultures 1). In the same way, nitrate consumption began resulted in a sharp decrease of the nitrate reduction immediately after inoculation of the medium with rate: 4 µg N-NO2 · h21 · mg21 of protein against 85.3 nonadapted cells, in both aerobic and anaerobic condi- µg · h21 · mg21 of protein in anaerobic conditions.
tions (Fig. 2). During aerobic culture, nitrate consump- However, an immediate production of nitrite was tion slowed down after 20 h because of a lack of noticed even though the cells used to inoculate the carbon source. Nitrate reductase activity resulted from culture were for the first time in the presence of nitrate.
the activity of the constitutive nitrate reductase and of Nitrate reductase activity was also measured on new enzyme synthesis. Thus, it seems that synthesis SGLY2 cell extracts obtained from a culture never and activity of nitrate reductase may occur in a wide subjected to nitrate. In this type of culture, an activity The same experiment was realized with nitrite as measured. In the same way, an enzymatic assay on the final electron acceptor (Fig. 3). Anaerobic nitrite whole cells from aerobic culture without nitrate was consumption started after a lag period of 1 day. In this realized by adding erythromycin (200 µg · ml21) and case, the use of nitrite is the only way to produce chloramphenicol (150 µg · ml21) in the test tube. These energy. However, according to the literature, no nitrite protein synthesis inhibitors decreased the nitrate reduc- reductase is synthesized in a nonadapted preculture.
tase activity: the activity, with chloramphenicol, was This lag phase corresponds to synthesis of a de novo nitrite reductase by using presumably residual energy 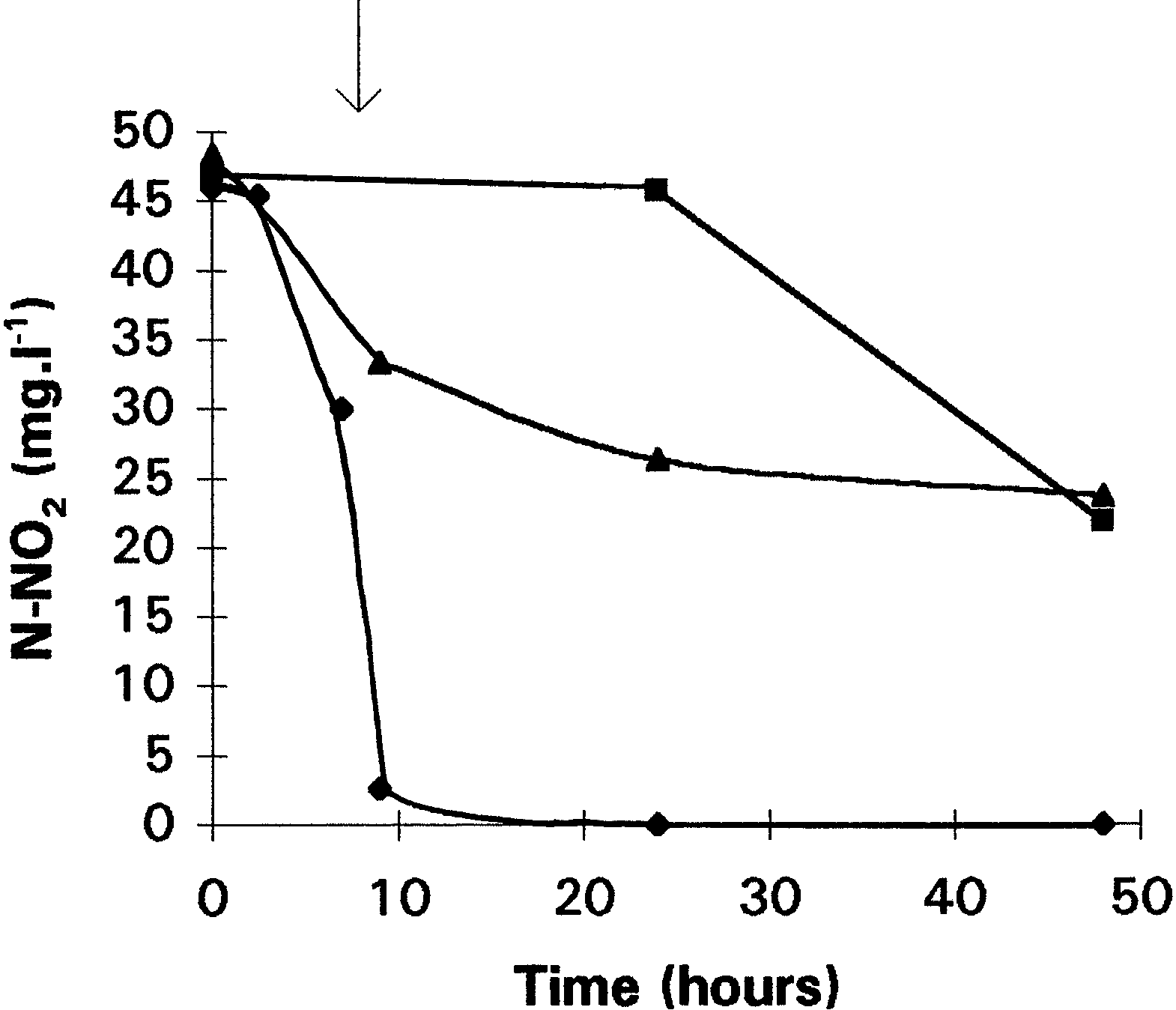 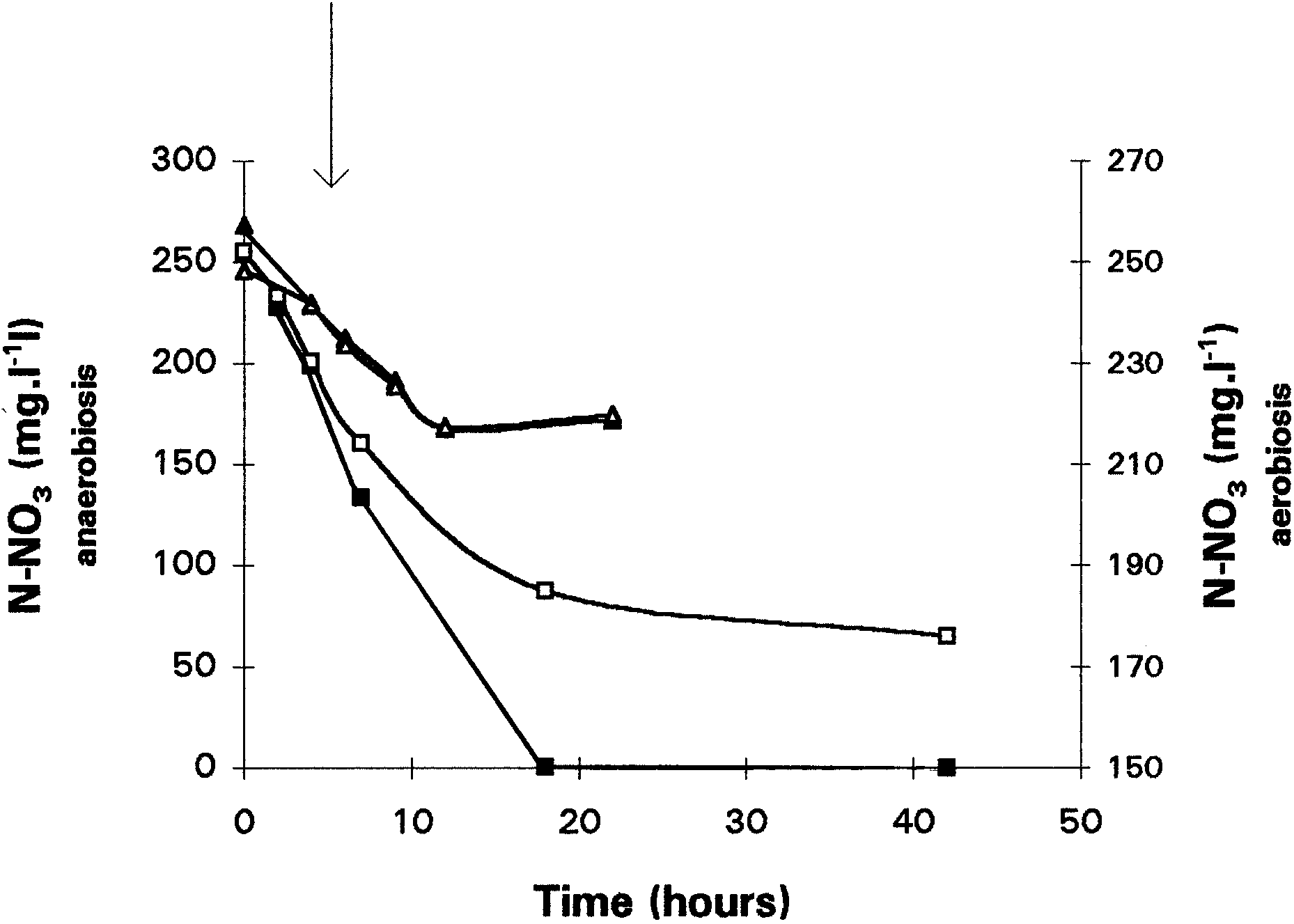 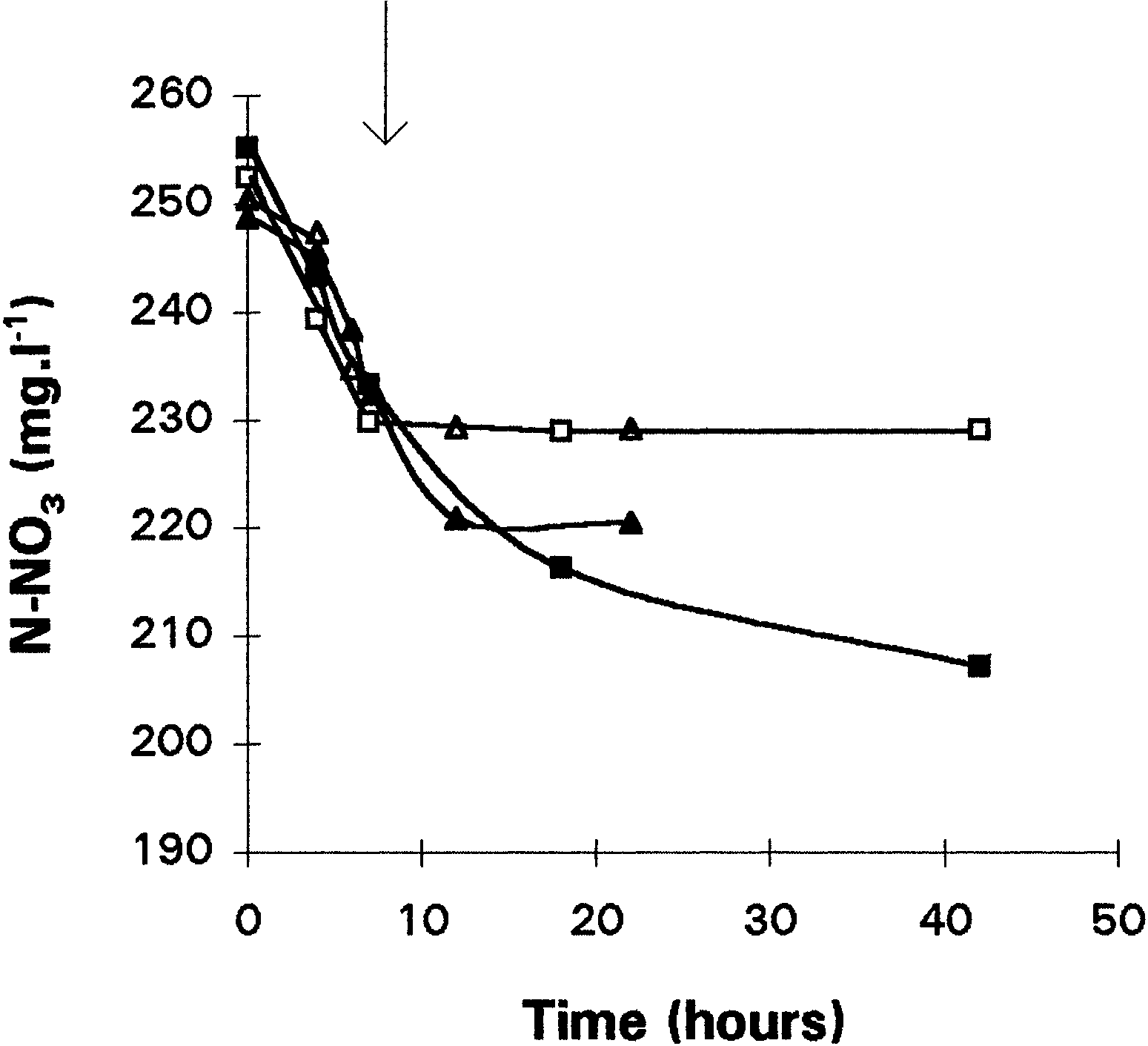 Fig. 3. Consumption of nitrite during anaerobic (M), partial aerobic Fig. 4. Influence of triton (0.02%) on the consumption of nitrate (U), and total aerobic cultures (Q) of Comamonas sp. The arrow during anaerobic (M, N) and total aerobic (Q, S) cultures of indicates the time at which oxygen has completely disappeared in Comamonas sp. Cultures were inoculated with anaerobic cells. M, the partial aerobic culture. Cultures were inoculated with non- Q, control cultures; N, S; Cultures with triton; =, addition of present in the cells. In contrast, partial or fully aerobicconsumption of nitrite started after a smaller lag period(4 h). This consumption was correlated with nitrousoxide and nitrogen production (data not shown).
Oxygen consumption provided the energy necessary tosynthesize the enzyme. Addition of chloramphenicolresulted in inhibition of nitrite consumption no matterwhat culture conditions were used. These experimentsdemonstrated that nitrite reductase, which may not beconstitutive, is synthesized under aerobic conditionsand that nitrite and oxygen are consumed simulta-neously.
Effect of triton, sodium azide, and cyanide on
nitrate reductase activity. Figure 4 shows the nitrate
consumption during anaerobic and aerobic batch cul-
Fig. 5. Influence of sodium azide (0.1 mM) on the consumption of tures of SGLY2 inoculated with adapted-to-N-oxide nitrate during anaerobic (M, N) and total aerobic (Q, S) cultures cells in the presence of triton. Addition of this deter- of Comamonas sp. Cultures were inoculated with nonadapted toN-oxides cells. M, Q, control cultures; N, S, cultures with azide.
gent to the culture medium resulted in a gentle decrease in the anaerobic nitrate consumption (0.111mg N-NO3 · h21 · mg21 of protein against 0.062 mgN-NO3 · h21 · mg21 of protein). It seems, however, to concentration tested (10 mM) neither denitrification have no effect on aerobic nitrate reduction. The same nor growth was observed. This means that the denitri- results are obtained with the nonadapted to N-oxides fying as well as the oxygen-respiring enzymatic sys- preculture. The presence of triton X-100 perturbated tem was completely inhibited at this high concentra- the permeability properties of the cytoplasmic mem- tion. In contrast, at 0.1 mM, the nitrate reduction rate of brane. This implies that under anaerobic conditions, the anaerobic culture, inoculated with the nonadapted the measurement of nitrate reductase activity is corre- cells (Fig. 5), fell to 7 µg N-NO3 · h21 · mg21 of lated with the membrane, whereas aerobic nitrate protein. This corresponds to a 97% inhibition of the reduction is independent of the membrane.
denitrifying enzyme activity measured under control The effect of azide on nitrate reductase activity anaerobic conditions. During aerobic culture at 0.1 during batch assay followed exactly the same pattern mM, no effect of azide on oxygen uptake was observed: observed with triton (Fig. 5). Whatever the aeration the disappearance of oxygen in the gaseous phase was conditions and the preculture used, at the highest correlated with protein synthesis. The only influence 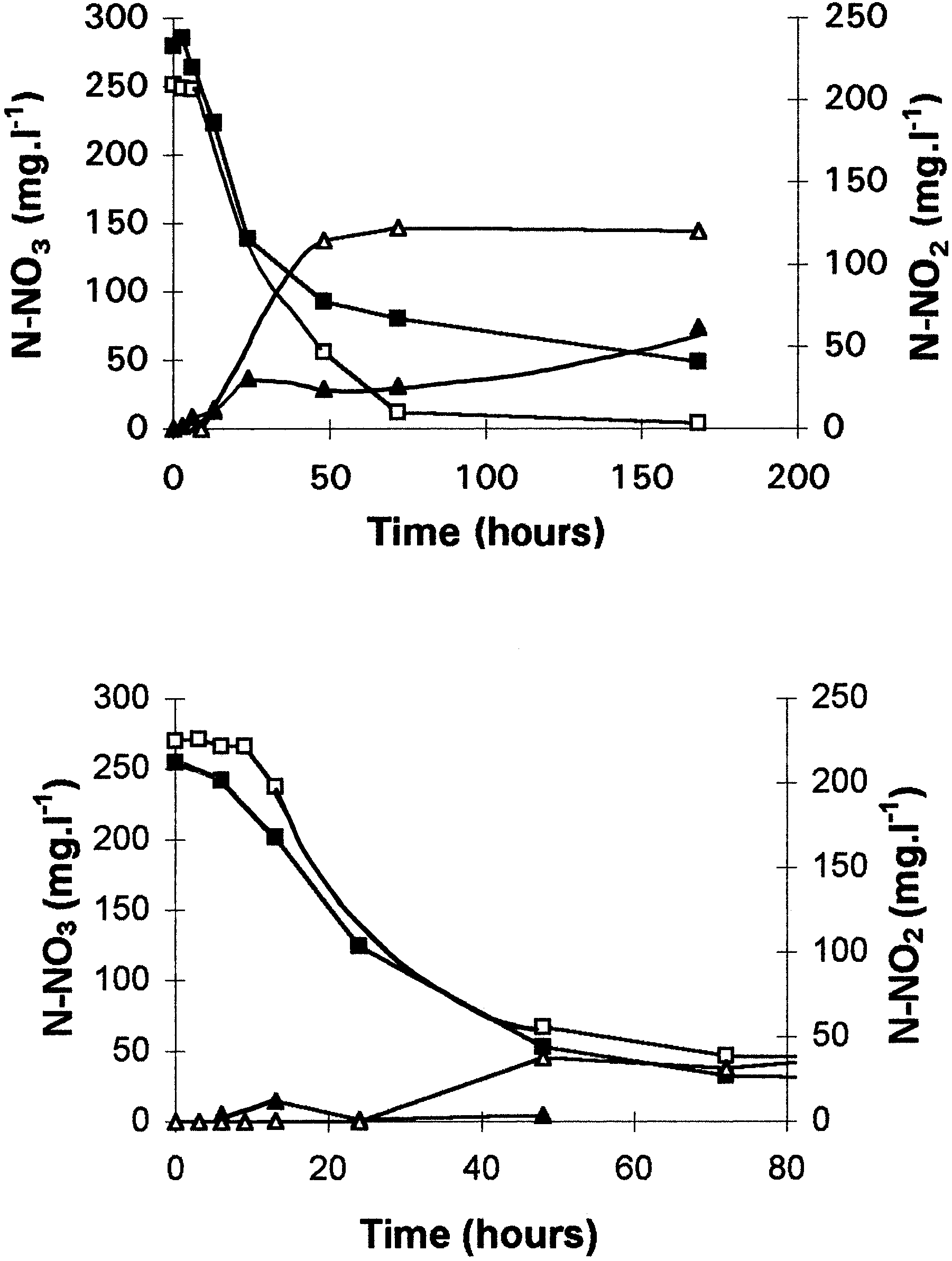