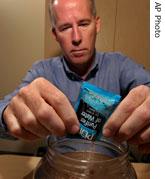 40. Which one of the following statements is true? (A. Rocko did not like other gorillas. B. Rocko behaved strangely because of toothache. C. The animal trainers were unfriendly to Rocko. D. Rocko was always separated from other gorillas.) Passage 4
Scientists al the Procter and Gamble company have developed a water treatment system (WTS) since nineteen ninety-five that they say is a powerful but simple way to save lives. Four grams of chemicals can treat ten liters of dirty water for a low cost, about ten cents. Experts say infections from dirty water kill several thousand children in developing countries every day. The company has been working with the United States Centers for Disease Control and Prevention. C.D.C. researchers tested it in Guatemala, Pakistan and Kenya. Procter and Gamble researcher Greg Allgood says cases of diarrhea in those studies fell by about fifty percent.
Researchers from Johns Hopkins University in Maryland tested the system at a refugee camp in Liberia. Mister Allgood says that study found a reduction of more than ninety percent. Use of the system is being expanded worldwide. Findings were described last week at an A small container holds the chemicals as a powder that is mixed in dirty water for five minutes. Once the water is clear, it is filtered through a cloth to catch impurities that settle. The water is considered safe to drink twenty minutes later. Procter and Gamble scientist Greg
Allgood demonstrates treatment
The treatment contains bleach to kill disease-causing organisms. It also contains ferric sulfate which dirt and other particles stick to. Mister Allgood says the chemicals can remove lead and other dangerous metals and even agricultural Mister Allgood heads the Children's Safe Drinking Water program at Procter and Gamble. He says about forty million packets of the treatment have been given to countries for free. They have been used in emergencies and in areas with limited Clean water is a limited resource in many parts of the world. Scientists, policy experts and others discussed ways to provide clean water to the world’s poor. Organizers say more than twenty percent of the world population lacks clean drinking Governments, not private companies, must take the lead in improving the public's ability to have clean water. 41. Which one of the following statements is true? (A. The said WTS is costly. B. The WTS used chemicals to pollute water sources. C. The WTS causes health problems. D. The WTS saves lives.) 42. The WTS will be widely used in which of the following? (A. In USA and Canada. B. In areas with polluted water sources. C. In areas close to water sources. D. In refugee camps.) 43. Which one of the following statements is true? (A. The WTS uses cancer-causing chemicals. B. The WTS reduces water supply. C. The WTS causes environmental problems. D. The WTS can remove DDT in dirty water.) 44. How much chemicals will be used for treating one hundred liters of dirty water? (A. 4 grams. B. 40 grams. C. 40 packets. 45. Which one of the following statements is true? (A. The WTS consumed much energy. B. The WTS will be a great help for people in poor countries. C. The WTS purifies chemicals. D. The WTS produces much dirty water.) 46. Which one of the following statements is true? (A. The WTS is a simple and cost-effective solution for treating dirty water. B. The researchers promote WTS to make a great fortune. C. The WTS causes racial conflicts. D. Companies should be responsible for improving water quality.) 47. Which one of the following statements about the WTS is true? (A. The treated water may contain chemicals. B. The treated water shall be drinkable after further processing. C. The treated water is supplied for free. D. The Proctor and Gamble company is responsible for treating dirty water in the world.) 48. What does the phrase mean "cases of diarrhea in those studies fell by about fifty percent"? (A. Fifty percent of the
researchers in the studies got diarrhea. B. The number of studies was reduced by fifty percent. C. Fifty percent cases of diarrhea was found in the studies. D. People with diarrhea had reduced fifty percent according to the studies.) 49. Which one of the following is the closest to the meaning of the word "settle"? (A. stick B. float C. stay D. stir)
50. Which one of the following countries is considered a developing country? (A. The United States of America. B. Japan.

Save BIG on these Dairy Products from Merial this Spring! Best in Class Solutions for Best in Class Dairies. Merial provides hard-working products for hard-working dairy producers. And this Spring, we are offering you BIG money-saving opportunities. You can save on these products: J-VAC®, CYSTORELIN® (gonadorelin diacetate tetrahydrate), IVOMEC® Brand Products, and save even BIGG