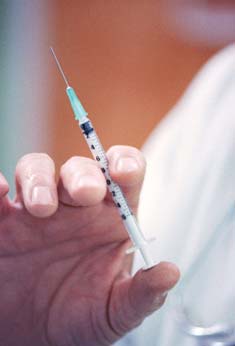 Medical Legal News
A free newsletter from Patricia Iyer MSN RN LNCC CLNI
Volume 37
Legal Nurse Consultant 908-788-8227
Anticoagulants:
Who we are.
A Double Edged Sword
Since 1989, Med LeagueSupport Services, Inc. has infarction, stroke, and limb gangrene.
administration of anticoagulants, such as newborn twins of actor Dennis Quaid.
Med League Support
Services, Inc.
slows clotting time, fell on the ice and hit tions can save lives, but also kill.
his head. Bleeding began within his brain, causing death. The patient’s attorney filed [email protected]
http://www.medleague.com
Patricia Iyer, MSN,
RN, LNCC, CLNI
intramuscular injections to a patient who Past President of the
therapeutic values, the injections caused American Association
of Legal Nurse
tion of blood in her right buttock. This in Consultants
administered incorrectly or in error.
turn pressed on the sciatic nerve, causing a foot drop. The patient’s son, who was Medical Legal News
claim and settled the case.
• The clotting time of a woman rose while she was on anticoagulant use, notifying the dietary department of the Heparin. When her hemoglobin began to drop, indicating fact the patient is on Coumadin, using programmable she was bleeding, the physician delayed ordering blood infusion pumps and premixed infusions of Heparin, moni- transfusions. The patient died from blood loss. A wrongful toring bleeding time with INR (international normalized ratio) levels, and education of staff, patients, prescribers,and families, among others. 6 This goal affects all Joint What makes anticoagulants so dangerous? First, there is a narrow therapeutic window of safety in the useof these medications. The primary action of anticoagu- Analysis of Medical Records
lants, to increase bleeding time, can lead to hemorrhage at Med League assists attorneys evaluating cases involv- any site in the body. There are multiple food and drug ing anticoagulant therapy by considering the answers to interactions with anticoagulants, making the response to these top ten questions and others applicable to the case: these drugs unpredictable. Frequent monitoring of clotting 1.Was the patient an appropriate candidate for time is necessary, requiring painful and frequent blood tests. Even when this monitoring occurs, the level of 2. Did the patient comply with outpatient blood tests anticoagulation is outside the therapeutic range almost half needed to monitor response to the anticoagulants? of the time. The risk of major bleeding with long-term 3. Were standardized protocols used to order treatment increases in the elderly - the population most in need of Coumadin for treatment of atrial fibrillation. These risks dissuade many prescribers from using Coumadin. It 5. Were abnormally elevated clotting times acted upon is estimated that Coumadin is not given to almost half of 6. Were there any signs of bleeding while the patient was Given all of the dangers associated with these high- risk drugs, anticoagulants are a primary focus of patient 7. How quickly did the healthcare team respond to safety efforts. A few days after the news of the massive overdoses received by the Quaid twins, Baxter an- 8. Did the nurses give Heparin or Coumadin as ordered? nounced it had designed a new enhanced label that 9. Is there evidence that hemorrhage was the cause of the featured an increase of 20% font size, a unique color patient’s death, or was some other cause more likely? combination, and a large red cautionary tear off label. 5 As 10. What type of medical expert is most appropriate toreview the case? part of the 5 Million Lives Campaign of the The Institutefor Healthcare Improvement (IHI), a goal has been set toreduce harm 50% from high-alert medications by Decem-ber 2008. IHI directs attention to the high risk aspects of Demonstrative Evidence
these medications through seminars and extensive infor- Med League helps to identify and prepare the types of mation on their website, www.ihi.org.
demonstrative evidence most useful to identify the details The Joint Commission (formerly the Joint Commis- of the case. For example, in the case involving the he- sion on Accreditation of Healthcare Organizations or matoma that developed from multiple intramuscular injec- JCAHO), which accredits most hospitals and a vast tions, we did a timeline of key events in the days leading up variety of other healthcare organizations, has identified a to the hematoma diagnosis, a chart showing all of the 2008 National Patient Safety Goal related to anticoagu- injections given in each buttock, and several line graphs lants: “Reduce the likelihood of patient harm associated correlating the clotting times, medications, and the injec- with the use of anticoagulant therapy.” There is a one year tions given each day. Demonstrative evidence is individual- phase-in program with specific milestones set at 3, 6, and ized to the details and themes of the case. Call us to discuss 9 months with the expectation that hospitals will fully implement this goal by January 2009. The implementationprocess addresses several key components of medical, References are found on our website at www.medleague.com/articles/ pharmaceutical, and nursing practice. These include use index.html. This article was written by Pat Iyer MSN RN LNCC CLNI of approved protocols for ordering and monitoring