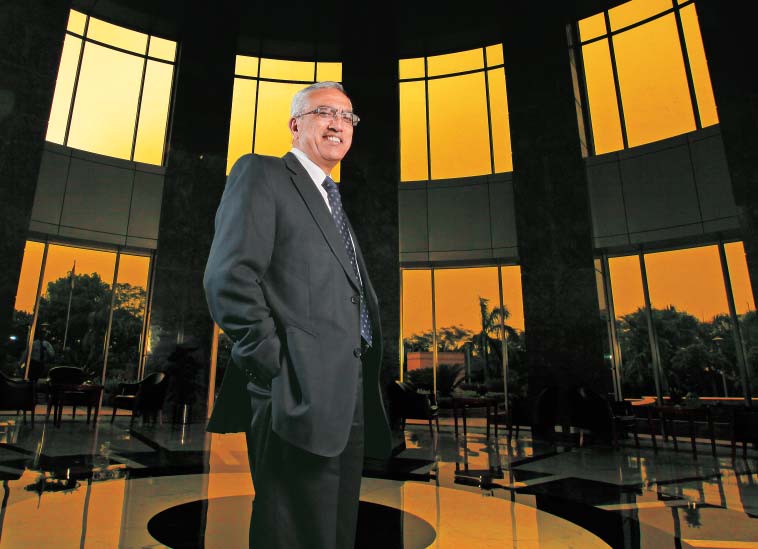 Ranbaxy-July 25.qxd 7/6/2010 5:04 PM Page 74 PHARMA—RANBAXY
Two years after it slammed into a US regulatory wall,
Ranbaxy Laboratories, under its Japanese owners, is working
the hard way to be back among the stars. SHALINI S. DAGAR
For a long time to come, July 3 for off-patent or generic drugs, had
$4 billion, it could only hurt more.
into court in a probe of possibly falsified “Look at it from the buyer’s point of view,” he says. He is right. The buyer’s worse for Tokyo-based Daiichi Sankyo.
find its stride in India. The pace of in- Comeback man: Atul Sobti, CEO and MD, Ranbaxy CLEAR AND PRESENT DANGER: RANBAXY’S US SAGA
June 2006
June 2008
July 2008
Sept. 2008
Feb. 2009
Dec. 2009
June 2010
action remains in effect till today.
72 BUSINESS TODAY July 25 2010
July 25 2010 BUSINESS TODAY 73

Ranbaxy-July 25.qxd 7/6/2010 5:04 PM Page 76 PHARMA—RANBAXY
How the company is focussing on its three core markets.
innovator prices today is a rich $24 bil- ARUN SAWHNEY, President (Global Pharmaceutical Business) liked.” His response came to BT via a A pharma veteran of 30 years with stints at Bayer India, Hindustan Ciba-Geigy and Max-Gb, Sawhney is AstraZeneca’s Nexium. Lipitor, or ator- one of the senior members of the executive team. in Gurgaon, a satellite city to the south- Another senior member, Sethi, with 21 years at Ranbaxy, heads the finance function. He is also involved with the firm’s M&A activities, taxation, treasury and forex management.
With over 30 years in drug discovery and development, Arora is a key senior hand at Ranbaxy. This double-doctorate is responsible in a big way for the drugs pipleline at the drugmaker.
BHAGWAT YAGNIK, Head (Global Human Resources) Yagnik is responsible for culture at an organisation with some sition, more so in the case of Ranbaxy.
4,000 staff (a third of them overseas). With some 20 years behind him, Yagnik is seen as a pivotal member of Team Ranbaxy.
A 26-year veteran with stints at majors such as Novartis and the key,” Sharekhan wrote this May.
Bristol-Myers Squibb, Adkisson has global experience in quality says: “Sales, profitability and margins control and assurance systems. He was earlier Senior Director (Quality Assurance) with Daiichi Sankyo, United States. He is Ranbaxy’s go-to man in solving the run-in with the FDA.
turing in the US in spite of its regulatory troubles there. Sobti says he is planning Hiroyuki Okuzawa, Head (Global Synergy Project) Okuzawa is currently leading the integration process between Ranbaxy and Daiichi Sankyo. Earlier, he managed the integration at Daiichi and Sankyo after the two merged in 2005.
sation,” targeting 30 per cent by 2012.
almost 700 people there,” he says.
ing it $2.2 billion in sales. In the US, this from the Japanese firm’s portfolio.
through its (share of doubts).,” he re- tails of beefing up Ranbaxy’s discovery flects. Still, he adds, the difference from earlier is that there are no hidden risks waiting to blow up. (See Clear & Present cially in generics. “There is good scope over Rs 450, is reflecting the market’s Daiichi Sankyo calls a “hybrid business 74 BUSINESS TODAY July 25 2010
July 25 2010 BUSINESS TODAY 75

Ranbaxy-July 25.qxd 7/6/2010 5:04 PM Page 78 PHARMA—RANBAXY
firm is benefitting. In the year to March 31, its sales rose 16 per cent in the US, Mumbai from Gurgaon, hired 1,500people, and created 10 business units.
Tsutomu Une, Member of the Board, Daiichi Sankyo Sobti has told his team that he is readyto accept a drop in operating mar- “Ranbaxy is like a diamond. And together with Daiichi gins for the first year, because of this.
Sankyo… the diamond will sparkle even brighter” Ranbaxy are trying to do is copy-bookstrategy. Try to straddle (and balance different parts of the $800-billion global current troubles; see Team Ranbaxy) have tried it — the latest being Abbott- lieve that Ranbaxy’s strengths could be turing sites and overseas operations.
leave” at the plants at Paonta Sahib or Dewas (in Madhya Pradesh) affectedby the FDA probe, or in the US team. Ranbaxy, too. Much of Ranbaxy’sfuture, suggests ex-chairman Brar, it. Chander, the Barings executive,reckons he is not worried for Ranbaxy in manufacturing. I would be verysurprised if compliance issues continue ^Including supply agreements beginning 2009 through 2014 & 180 days exclusivity in 2014 *Boehringer Ingelheim/ Astellas 76 BUSINESS TODAY July 25 2010