Evolutionary history and mode of the amylase multigene family in drosophila 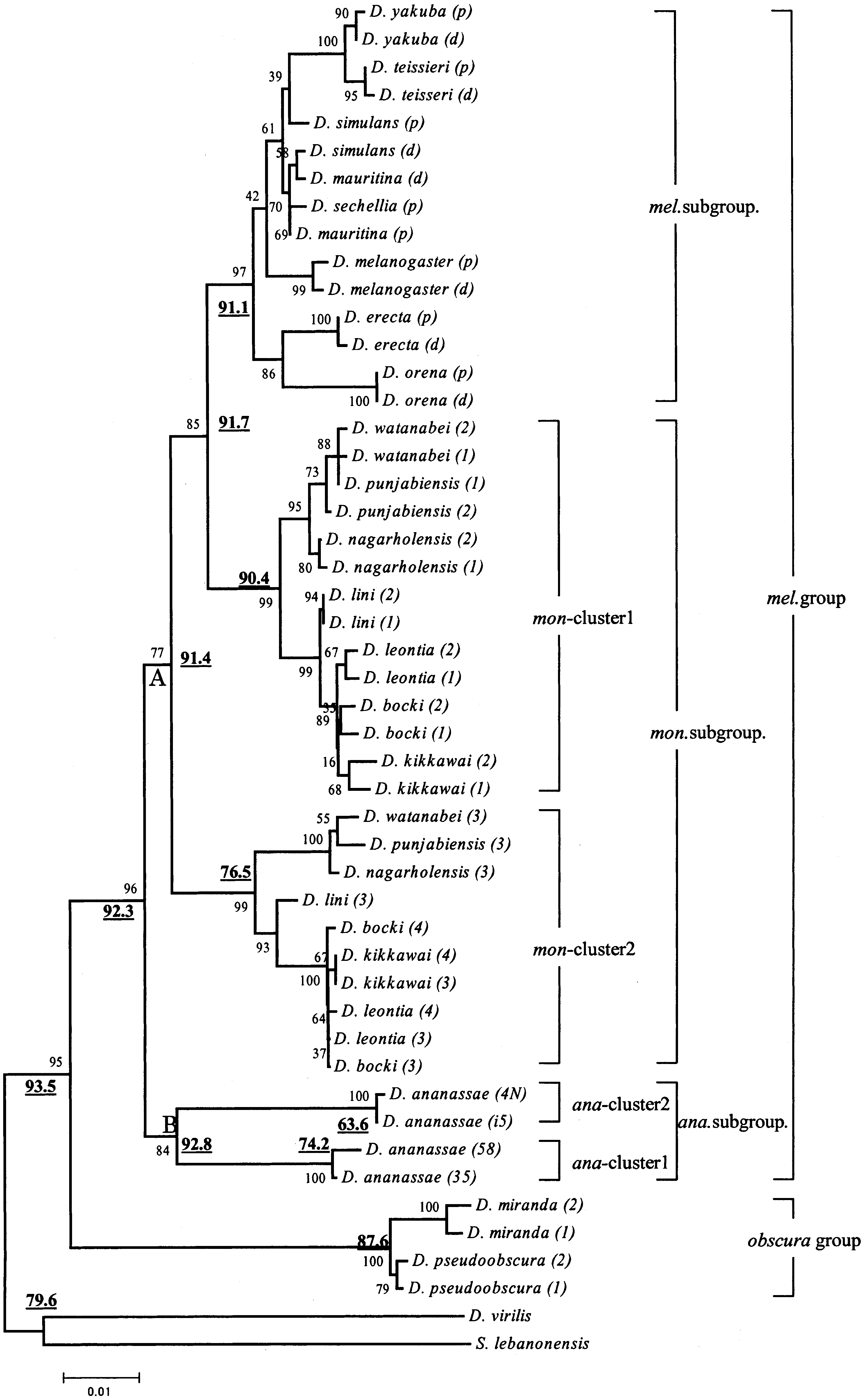 Gene NJ tree reconstructed by ﬁrst and second codon positions and Kimura’s two-parameter distances. The numbers near the nodes refer to bootstrap probabilities and the boldface underlined numbers refer to GC3contents of the corresponding ancestral nodes.
same, we show only the NJ tree constructed by K80 melanogaster group formed a monophyletic group distances (Fig. 1). Using the Amy sequences of D.
with very high bootstrap probability (96%). The Amy virilis and S. lebanonensis as outgroups, the Amy genes of the ananassae subgroup diverged ﬁrst from genes of the obscura group ﬁrst diverged from the the other Amy genes of the melanogaster and montium other lineages. Furthermore, the Amy genes of the subgroups, followed by those of the montium sub- group. All Amy genes in the subgroups and groups their standard deviations, A and B (Fig. 1), for the (except for the montium subgroup) formed mono- mon-clusters 1 and 2 and for the ana-clusters 1 and 2, phyletic clusters, although some clusters do not have respectively. Using the 24.9-mya divergence time of high bootstrap probabilities. These results are con- the obscura and melanogaster groups as a calibration sistent with previous studies (Russo et al. 1995; Ino- point (Russo et al. 1995), the duplication time be- mata et al. 1997). Another important observation in tween mon-cluster 1 and mon-cluster 2 was estimated Fig. 1 is that there are two gene clusters with high at about 13.96 ± 1.93 mya and the duplication time bootstrap probabilities within the montium subgroup between ana-cluster 1 and ana-cluster 2 was estimated species and D. ananassae. For the montium subgroup, at about 12.38 ± 1.76 mya. These results indicate we refer to the Amy paralog cluster including the that the two gene duplication events occurred inde- Amy1 and Amy2 genes as ‘‘mon-cluster 1’’ and the pendently and relatively recently, after the split of the Amy paralog cluster including the Amy3and Amy4 ananassae subgroup and the montium and melano- genes as ‘‘mon-cluster 2.’’ Similarly, we refer to the gaster subgroups. The calibration time used in the Amy paralog cluster including the Amy58 and Amy35 present study is considerably conservative. The esti- genes as ‘‘ana-cluster 1’’ and the Amy paralog cluster mate of the divergence time for the split of the obs- including Amy4N and Amyi5 genes as ‘‘ana-cluster 2’’ immunological distance data (Beverley and Wilson Figure 1 clearly suggests that one duplication 1984) is about 46 mya, twice the estimate obtained by event, which resulted in two gene clusters in the Adh sequence data (Russo et al. 1995). Thus, the es- montium lineage, predated the split of the melano- timates of the duplication time in present study gaster and montium subgroups and that another du- should be regarded as the minimum ones.
ananassae lineage after the split of the ananassae Birth-and-Death Process Versus Concerted Evolution subgroup and the montium and melanogaster sub-groups. Since the melanogaster subgroup species have Since there is great heterogeneity in GC3content only one gene cluster, they are likely to have lost one among the paralogous Amy gene clusters (Table 1), of the two homologous gene clusters in the montium the method of Galtier and Gouy (1998) was used to subgroup. This inference on gene duplication/loss estimate the ancestral GC3contents. The numbers events is further supported by comparison of their underlined in Fig. 1 show the estimates of the cor- gene arrangements in genomes. For instance, Fig. 2 responding ancestral node GC3contents. Our results shows that the two gene clusters are located on dif- indicate that the common ancestor of Sophophora ferent regions of the same chromosome in the mon- species had an elevated GC3content, which is con- tium subgroup species but on diﬀerent chromosomes sistent with at least one other study (Rodriguez-Tre- in D. ananassae (Inomata and Yamazaki 2000; Da lles et al. 2000). The GC3content of the common Lage et al. 2000). The most likely scenario is that the ancestor of mon-clusters 1 and 2 was 91.4%, whereas two gene duplication events occurred independently the GC3contents of the ancestral nodes of mon- in two diﬀerent lineages and that the melanogaster clusters 1 and 2 are 90.4 and 76.5%, respectively. The subgroup species might have lost the corresponding diﬀerence in GC3content between the ancestral paralogous Amy cluster 2 (Figs. 1 and 2).
nodes of mon-clusters 1 and 2 was 13.9%. The To test the hypothesis of molecular clock at the standard error was estimated by a bootstrap method ﬁrst and second codon positions, we compared the with 100 resampling replicates. The estimated diﬀer- likelihoods of the phylogenies assuming a constant ence was statistically signiﬁcant (Z = 3.69, p < 0.01).
rate and without assuming a clock (DNAMLK vs.
For D. ananassae, the GC3content of the common DNAML in PHYLIP 3.6 [Felsenstein 2002]). Both ancestor of ana-clusters 1 and 2 was 92.8%, whereas models resulted in the same topologies. The log the GC3contents of the ancestral nodes of ana- likelihood under the assumption of a molecular clock clusters 1 and 2 are 74.2 and 63.6%, respectively. The was l0 = )4144.23, whereas the log likelihood under ancestral node of ana-cluster 1 has a signiﬁcantly the assumption of no clock was l0 = )4121.26.
higher GC3content than does that of ana-cluster 2 Comparison of twice the log-likelihood diﬀerence, 2dl (Z = 4.54, p < 0.01). These results consistently = 2 · ()4121.26 ) ()4144.23)) = 45.94, with the chi- suggest divergent evolution between the two gene square distribution (df = 47, p = 0.516). The dif- ference between the two models was not signiﬁcant, Figures 1 and 2 imply that the melanogaster sub- indicating that the molecular clock holds at the ﬁrst group species might have lost one Amy cluster ho- and second codon positions. Therefore, the outputs mologous to mon-cluster 2 with a lower GC3content.
of maximum likelihood analysis under a molecular clock and bootstrap resampling with 100 replicates D. ananassae retain cluster 2, the gene cluster has lost were used to estimate the gene duplication times and some speciﬁc regulatory elements compared with the 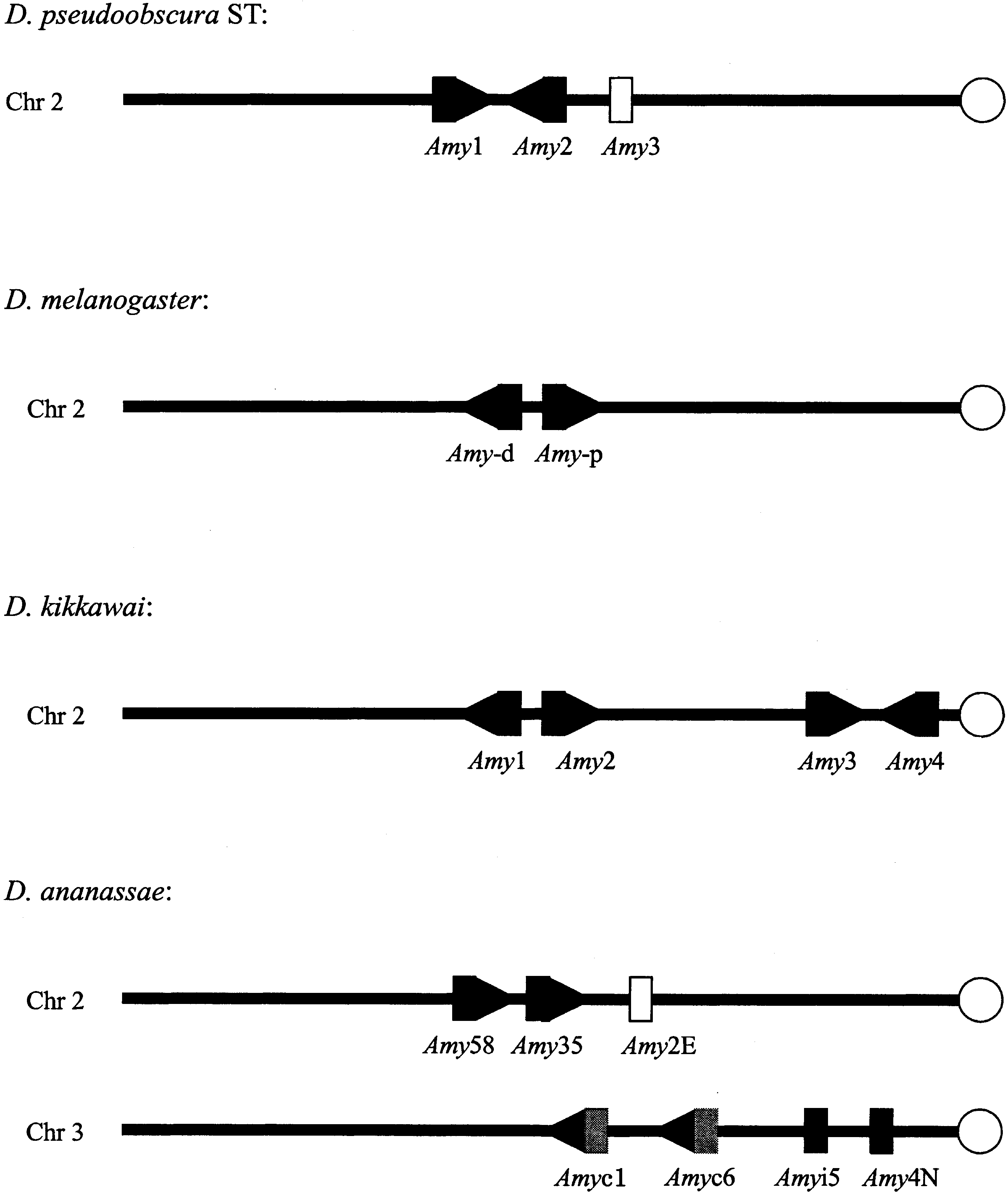