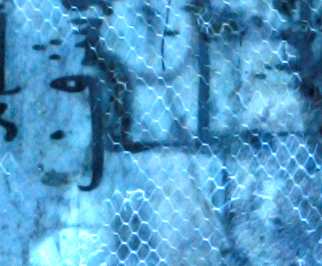 DIGITISATION OF THE MINGANA-LEWIS PALIMPSEST, CAMBRIDGE UNIVERSITY LIBRARY. FINAL REPORT OF THE PROJECT FUNDED BY TIMA The main purpose of this project was the digitisation of the Mingana-Lewis palimpsest (Cambridge University Library Or. 1287), applying ultraviolet lighting in order to read the scriptio inferior of the parchment, that bears some fragments of Qur’anic text. Further aim of the project was the analysis of the content of the palimpsest, comparing it with the edition given by Alphonse Mingana and Agnes Smith Lewis one century ago. The project has been originally proposed by Alba Fedeli to the Cambridge University Library in September 2009, before applying for funding from TIMA. Soon afterwards, the planned work started to imply multiple expertises and requirements, pertaining to the care of the precious manuscript itself, as well as to the technology available for the imaging of the object and lastly to the research purposes. This interesting and challenging cooperation between the CUL and the Italian researchers has changed the initial planning, thus giving rise to a joint project between the Cambridge University Library and TIMA, funded by both institutions. 2.
Since her first examination of the Qur’anic portion of the Mingana-Lewis palimpsest in 2005, Alba Fedeli realized the necessity for getting images taken with UV lighting in order to reinforce the contrast between the washed ink and the parchment skin, thus allowing scholars to read the missing text of the scriptio inferior. At that time the CUL had no experience in this pioneering field. The ensuing participation of Alba Fedeli in the Yemeni project for the digitisation of a palimpsest with the Italian photographer Fabrizio Fenucci, contributed to the proposition of the plan, which arose in one of the fertile and exciting encounters during the fifth Islamic manuscripts conference in Cambridge in July 2009. The meeting between Yasmin Faghihi, Alba Fedeli and Fabrizio Fenucci at the conference gave occasion to the first planning of the digitisation of the Mingana-Lewis palimpsest, later fixed by Yasmin Faghihi and Alba Fedeli in September 2009. The project has been proposed firstly to the Library in order to obtain its permission and secondly to TIMA in order to obtain a funding for its realisation. The planned scheme was based on the methodology already used in the imaging of the Yemeni palimpsest and it has been approved by the CUL on 12th October 2009, but the extreme importance and fragility of the manuscript called for a special caution from the side of the Library, that participated in every decision relating to the handling of the manuscript itself and its safeguard. 2.
Before the approval of the digitisation project, the CUL started on a major conservation work on the palimpsest Or. 1287. The original plan of imaging had been scheduled after the accomplishment of the conservation work by the CUL, as it would have provided the ideal circumstances for the handling and imaging of the unbound and flat folios of the manuscript.

The conclusion of the conservation work had been scheduled by early 2010, but it has been achieved in May 2010, thus delaying the beginning of the digitisation project. Meanwhile, till May 2010, the conservator (Deborah Farndell), consulting also Fabrizio Fenucci experience, investigated about any possible damages that exposure to UV light could cause to the parchments. The head of conservation was concerned about the amount of UV exposure Fabrizio Fenucci was proposing, in order to prevent from putting this valuable and vulnerable material at risk. 2.
Initially the CUL intended to make use of Fabrizio Fenucci expertise, as planned in the original project proposal submitted to TIMA (October 2009). Afterwards the CUL decided to take on more responsibility for the imaging, supported by their photographic and conservation teams and by the hki.fitzmuseum.cam.ac.uk/). Furthermore the CUL concluded to jointly fund the project, covering the difference between the costs of the imaging and TIMA grant. TIMA approved such a variation from the original plan, after having received a request by Alba Fedeli and Grant Young (as per attached letters). Afterwards, the CUL evaluated the results of the initial test images produced by Hamilton Kerr Institute, taking into account also the requirements of Alba Fedeli who had started to analyse the content of the test images. Thus it had been concluded to capture the images at a higher resolution, in the premises of the CUL, involving a consultant from the Hamilton Kerr Institute. The execution of the imaging in September 2010 is the result of the invisible work of cooperation among all the people who have participated in the project. 2.
All the images of the Qur’anic portion of the palimpsest were captured at the beginning of September 2010 in the premises of the CUL, thus making available: • 51 colour images using the standard P45 camera back without • 50 greyscale images using the achromatic P45 camera back without a filter and with flash • 50 colour images using the standard P45 camera back with the B+W 420 filter and UV • 50 greyscale images using the achromatic P45 camera back with the B+W 420 filter and UV • 51 greyscale images using the achromatic P45 camera back with the B+W 092 filter and Images were produced in the Phase One RAW format and then processed as TIFF images. All the images received a sequential filename, that have been recorded in relation with the manuscript’s folios as numbered by Agnes Smith Lewis at the beginning of the last century (as per attached file). Both RAW and TIFF formats are available to Alba Fedeli and her team in order to start the study of the manuscript and the post-processing stage of the project, possibly with a further funding by TIMA in 2010-2011. The methodology used in the imaging process by the CUL has been described by Grant Young in his report here attached. 3 1. Digitisation of the Mingana-Lewis palimpsest. The project has given rise to a digital resource: the images produced by the Imaging Department of the CUL, in RAW format, then processed as TIFF images. 3.
2 Preservation of the safety of the palimpsest. The images taken applying UV light will avoid any future use of UV lamps by scholars in order to be able to highlight the scriptio inferior of the parchment, without putting this valuable and vulnerable material at risk. 3.
3 3. Dissemination of the work done. 3.1. The joint project will be a contribute to a larger project of the CUL aimed at the digitisation of part of their collection, in order to create an online platform of digital collections. 3.2. Alba Fedeli has presented a paper at the sixth Islamic manuscripts Conference, on 9th July 2010, with the title “Digitisation of the Mingana-Lewis palimpsest, Cambridge University Library: a preliminary report of the project”, in order to share the first results inferred on the basis of the test images produced in June 2010 by the Hamilton Kerr Institute. Deborah Farndell (conservator of the CUL) and Grant Young (Digitisation & Digital Preservation Specialist in the CUL) have taken part in the paper in order to explain the various facets of a seemingly “simple” work of digitisation. 3.3. The editorial board of the Journal of Islamic Manuscripts has invited Alba Fedeli to submit an article related to her presentation during the annual conference in Cambridge to underline the first results of the study of the images of the palimpsest. The article will be submitted by the end of January 2011. 3.4. Cooperation between different scholars and institutions. The exciting and not foreseen outcome of this project is the opening of a very interesting platform for discussion and exchange of experiences, open to the contribution of expertise from scholars and institutions. Furthermore the interesting outcome of this cooperation among different scholars was the attempt to follow the best practice in a palimpsest’s digitisation. The fact that the CUL decided to jointly fund the project, is a good example of such an outcome. It should be also mentioned the presence on the web (http://codexmanchester.wordpress.com/) of the experience of the team from Manchester, that participated to the sixth Islamic manuscripts conference and offered a workshop about the best practices in the digitisation works. The website mentions the “Cambridge project”: “It was especially interesting to meet the Team from Cambridge who are using full spectral imaging techniques to photograph the Mingana-Lewis Palimpsest. Also giving a paper was Micheal Toth, of the Walters Art Museum, who was responsible for the same full spectral imaging of the Archimedes Palimpsest. This is something we are eager to know more about, and will be following the progress of the Cambridge project very closely”. 4 PROGRESS OF THE “CAMBRIDGE PROJECT”. As planned in the proposal for the grant in 2009-2010, the project could continue with the post-production work of the images taken with UV lighting, IR lighting and flash lighting, in order to enhance the scriptio inferior of the palimpsest, with a close collaboration with Alba Fedeli who will start the study of the content of the manuscript.