Treatment Of Rosacea With Intense Pulsed Light Photorejuvenation
Amy Forman Taub, MD, and Erin DeVita, CST
Northwestern Memorial Physicians Group Center for Advanced Dermatology and Laser Surgery Abstract: Rosacea is a disease that affects millions of men and women.
Signs and symptoms include facial erythema, flushing episodes and
acneiform eruptions. Conventional treatment consists of topical and oral
antibiotics, although many people have sub-optimal control of their
flushing and erythema with medical therapy. Although the etiology of
rosacea is unknown, the end result is a diffuse network of small
telengiectasias. It would seem reasonable to use a laser targeting vascular
lesions to treat rosacea.
There are few reports of the use of lasers to treat rosacea. We investigated
the use of intense pulsed light therapy for reduction of the symptoms and
signs of rosacea. 30 consecutive patients (skin types I-III) underwent 1-5
treatments with intense pulsed light and were assessed for degree of
reduction in erythema, severity of flushing episodes and severity of acne
breakouts. The Vasculight Plus intense pulsed light source was utilized at
the following parameters: a double pulse of 2.4 and 4.0 ms and a 20 ms
delay time at a fluence of 32-38 J (570 filter) or 27-32J (560 filter).
Results were determined by clinical evaluation by the treating physician
and patient evaluation via questionnaire. 87% of patients rated their
redness as better or much better and 79% thought their flushing improved.
64% said their breakouts improved. Complications were minimal and
transitory.
These results suggest intense pulsed light is an effective adjunctive
treatment for the signs and symptoms of rosacea. Longer-term followup
will be needed to determine the degree of maintenance therapy necessary
to maintain a remission state in this chronic disease. 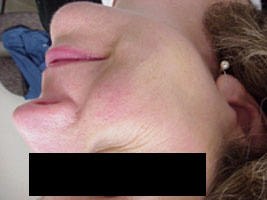 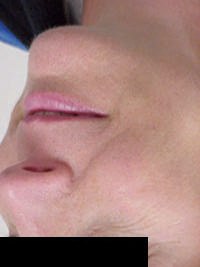 Introduction
1. Rosacea is a chronic disease that affects millions of men and women.
2. Signs and symptoms include erythema, flushing episodes with or without trigger
3. Etiologic theories include bacteriologic, inflammatory, neurologic, and vascular 4. Conventional treatment with oral and topical antibiotics is often only partially 5. Panfacial treatment with an intense pulsed light source targeting the vascular telengiectasias of rosacea was investigated for minimizing the erythema, flushing discomfort, and acneiform lesions of rosacea. Patient #1: Left profile, before treatment. Patient #1: Left profile, after treatment. 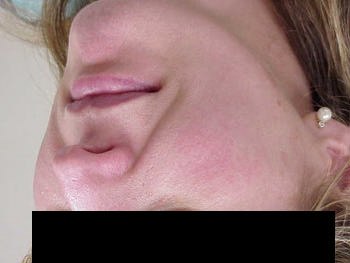 Methods
1. 30 consecutive patients presenting for treatment of resistant rosacea were enrolled in
the study. 2 did not complete their follow-up visits, so the 28 remaining were evaluated. 1-5 treatments were performed on these patients all of whom had skin types I-III. 2. The Vasculight Plus Intense Pulsed Light device was utilized with refrigerated gel. 3. The parameters were: 560 (at 27-32J) or 570 (at 32-36J) filter with 2.4/4.0 ms. 4. Patients were evaluated by digital photography, clinical assessment, and
Results

1. The mean duration of disease for these patients was 7.25 years. The patients’ age
range was 33-65, the average being 44. There were 26 females and 2 males. 2. The two principal motives cited for pursuing treatment were redness and flushing. Other reasons given were the desire to wear less makeup and the wish to discontinue oral medications. 3. The main flare factors reported by patients were (in descending order): intense emotion, exercise, sun, wind, red wine, other alcoholic beverage, spicy foods, white wine, hot beverages. 4. The average number of treatments was 3.7 and average time to follow up was 3.6 Patient #2: left profile, before treatment. 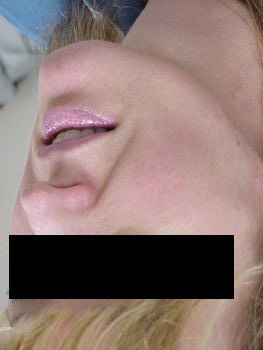 Patient #2: Left profile, after treatment. Results II
1. 33% of patients thought their redness much better, 54% better and 18% felt they were
2. 33% of these patients thought their flushing episodes were much better and 46% deemed them better. 25% felt they were the same. 3. 39% said their breakouts were much better, 25% better, and 25% the same. 4. Complications were minimal (purpura in one, peeling in one and hypopigmentation in
Discussion
Patients with rosacea often get to a plateau in their medical treatment where they have
controlled their acne and reduced their redness by one to a few shades -- but they
continue to have some degree of background redness, fixed telengiectasias, and flushing
episodes. When presented with an option to improve upon this, most are eager to try a
new treatment. It is imperative to explain to patients that this is not a cure for rosacea
and that rosacea is a chronic disease that will require ongoing treatment. I have found
that this disease profoundly alters my patients’ self-perception and that they are often
frustrated by the lack of treatment options. Men also perceive the signs of rosacea as
putting the stigma of associated alcoholism on themselves, and are relieved to be rid of
the redness.
Currently we are experimenting with a Zimmer Cryo-5, an air-cooling device that
improves the tolerance of this procedure, decreases potential complications and may
enable us to perform higher intensity treatments and reduce the number of treatments
necessary to induce remission. 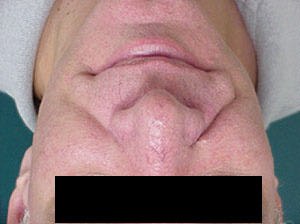 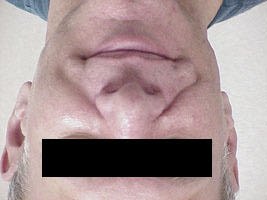 Also, we do utilize a 1064 Laser (Vasculight) occasionally with a 6 mm spot size at a
setting of a single 16 ms pulse with 95-110 Joules for larger diameter (0.5-2mm) vessels
around the nose, for more rapid resolution.
Conclusions
Intense Pulsed Light therapy is a safe and effective treatment for the signs and symptoms
of rosacea. Longer-term follow-up and further studies will be ne cessary to elucidate the
exact role of lasers in the treatment of rosacea, which is a chronic disease.
We propose that laser therapy can play a primary role in the induction of remission in
rosacea. Ideally, we would determine how to maximize its efficiency and minimize
exacerbations. We are planning a longer-term, quantitative prospective study to further
elucidate this.
References
1. Jansen T, Plewig G. Rosacea: classification and treatment. JR Soc Med 1997
2. Webster GF. Treatment of Rosacea. Semin Cutan Med Surg 2001 Sep;20(3):207-8. 3. Angermeier MC. Treatment of facial vascular lesions with intense pulsed light. J 4. Laughlin SA, Dudley DK. Laser therapy in the management of rosacea. J Cutan 5. Dahl MV, Katz HI, Krueger GG, Millikan LE, Odom RB et al. Topical metronidazole maintains remissions of rosacea. Arch Dermatol 1998 Jun;134(6):679-83.

MEDICAL ASSISTANT STUDY GUIDE BASIC ANATOMY & MEDICAL TERMINOLOGY 1) Which of the following suffixes means “lack of 2) The body cavity that contains the intestines is the 3) The abbreviation q.o.d. as used in prescriptions, Copyright © 2012 American Association Of Medical Personnel 5) Which of the following suffixes refers to pain? 6) The organs of the respiratory system incl