Streamlining the development of new cold tolerance rice varietiesDan Waters & Robert HenrySouthern Cross University, Lismore in a rice hull
• Cold temperatures during the rice growing season can result in significant yield loss and significant income loss to the industry • The deep water required on the rice field throughout the cold sensitive early microspore stage of pollen development, would not be necessary with cold tolerant rice • The use of molecular markers to identify the genetics behind cold tolerance are being investigated • The current methods used to investigate cold tolerance rely on selecting the appropriate time to expose crops to cold, which can be difficult As rice growers know all to well, cold temperatures Understanding cold tolerance
damage the developing pollen, causing grain sterility
Research into the genetics of cold tolerance is being funded and lower crop yields. Yield reductions of more than because it is important to understand the genetics of the cold
1 t/ha, due to low temperatures, occur about one tolerant material that is being introduced into the breeding
year in four (on average) and cost the Australian program. There are many different cold tolerant rice varieties
rice industry around $50–60 million, depending on in the world but it is unclear to what extent all of these
the year. Improvements in cold tolerance of rice will varieties differ genetically, in terms of the way they tolerate
have significant economic benefits to the industry, as cold. If the different cold tolerant varieties rely on the same
rice production could be increased and the capacity gene (or genes) for cold tolerance, then there is no benefit
for a more stable supply of rice would secure current in using multiple donors of cold tolerance in a breeding
and future markets.
program. If on the other hand, the varieties differ in the way Cold tolerance would also mean that the deep water required in which they tolerate cold then it may be possible to gather for temperature buffering during the early microspore stage different cold tolerant mechanisms into a single rice variety, would not be necessary. During a cold event, the water in making it even more tolerant than existing varieties. a rice bay is around 7–8°C warmer than the surrounding Using molecular markers, it is possible to get the DNA air, insulating the developing panicle from the cold air and fingerprint of an individual plant and work out which parts preventing damage to the pollen. To ensure the protection of its genome are contributed by each of the parents. If this of the developing crop, the depth of water held is 20–25 cm data is collected and then combined with the cold tolerance during the most temperature sensitive phase of crop growth. data for many plants, it is possible to work out which parts of If more cold tolerant varieties were available there would not the genome are responsible for the control of cold tolerance. By using this process on different cold tolerant parents, it will Rice breeding programs are underway that are attempting be possible to work out if the same or different parts of the to combine quality, economic and cold tolerance parameters genome control cold tolerance.
in single rice varieties through the use of molecular markers. Molecular markers can identify those parts of Sorting good and badthe rice genome (the plant’s genetic make-up) that control Molecular markers also supply the tools for separating cold tolerance, as well as a variety of other parameters. ‘good’ genes from ‘bad’ genes in a breeding program. The The genetic information gained can be used to design objective of rice breeding is to combine the greatest number tests to be used by breeding programs to identify specific of desirable traits within a single variety. For example, a characteristics. variety can have a comprehensive range of positive genes 46 • IREC Farmers’ Newsletter, No. 174, Summer 2006-07 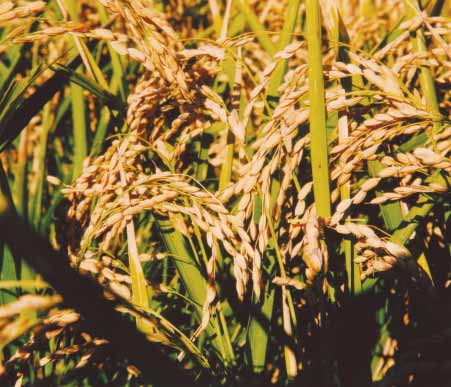 for quality traits, yet lack an optimum combination of genes The use of molecular markers, which have identified a region for desired agronomic traits. The response is to take the of the genome that explains a large part of cold tolerance, variety which has the desirable quality traits and cross it with may make it possible to get around some of the difficulties of a variety which has a more complete collection of genes for testing for tolerance with cold temperature challenges.
the desirable agronomic traits. However, the variety which supplies the favourable agronomic traits also passes the RIRDC Project USC-6Aunfavourable quality traits on to its offspring, and so the Professor Robert Henrymany offspring will be a complicated mixture of favourable Southern Cross University, Lismoreand unfavourable genes. The challenge then is to identify T: 02 6620 3010offspring from this cross which have the optimum collection E: [email protected]of genes. This can be particularly difficult to achieve when traits are determined by genes which are physically close to each other because the gene encoding the favourable agronomic trait will often be in combination with a gene which encodes an unfavourable quality trait. For example, transferring cold tolerance into rice varieties adapted to Australian conditions has proven to be difficult due to the close linkage of cold tolerance genes with genes for poor milling quality. Because they effectively give a snap shot of a plant’s genome, molecular markers can identify plants where the linkage between good and bad genes has been broken. Streamlining with molecular markersTesting for cold tolerance, without molecular markers, needs to be undertaken on a large scale and the crop needs to be cold challenged at the sensitive pollen development stage (early microspore). If the cold challenge is at the wrong time, a rice plant may appear to be cold tolerant when it is not. Within a population of rice derived from a single cross there will be different levels of cold tolerance and different rates at Figure 1: The use of molecular markers has the potential to streamline the development of cold tolerant rice varieties, saving which the plants mature due to their different genetic make millions of dollars of lost income to the industry, and reducing the up, so finding the ‘right’ time for cold challenge is difficult. need for deep water at the early microspore stage. IREC Farmers’ Newsletter, No. 174, Summer 2006-07 • 47

Wine is the difference between eating and dining I look forward to a glass of wine while preparing supper, was, in fact, a sense of dread as mealtime approached, be-and at least another with the evening meal. My husband cause what I used to look forward to — the combinationCaffeine-free and I eat well, and dinner is our night’s entertainment. And of two of my favourite thing